‘If you won with me who has never won anything, you must be good!’: Maurizio Sarri revels in his first ever Serie A title win after his Juventus side clinch glory by defeating Sampdoria

Juventus boss Maurizio Sarri has revealed that he told his victorious players they had won Serie A in spite of his lack of silverware after they sealed the title on Sunday.

Champions Juve won their ninth straight Scudetto with a 2-0 win at home to Sampdoria, making 61-year-old Sarri the oldest coach to win the Italian top flight in his debut season in charge.

After smoking a cigarette while being drenched in soapy water by his squad, Sarri admitted to Sky Sport Italia: ‘I told them, “if you won with me who has never won anything, you must be really good.” 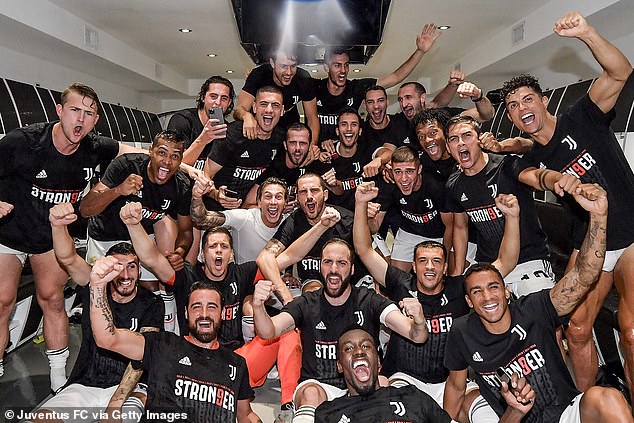 ‘The first day you come in, you see people – not just world-class players. As time passes, you get fond of them and the rapport goes from being strictly professional to personal, too.

‘The first day, I step into the locker room and know there are some top players. After a while, you walk in there knowing there are some great guys you can rely on.’

Sarri won the Europa League with Chelsea last season and was named Serie A coach of the year during his time at Napoli in 2016.

He confessed that a frank mid-season discussion with stars including strike duo Cristiano Ronaldo and Paulo Dybala played a key part in a campaign that ended in domestic glory with two matches to spare.

Sarri said: ‘You can’t just walk straight into a club that has won for eight years in a row and immediately try to order changes. That wouldn’t be very intelligent.

‘There were tactical difficulties, trying to get all these very strong players and their various characteristics to work together.

‘That was not something to be taken for granted, as we saw in previous years, because Dybala and Ronaldo didn’t really start together very often.

‘They are world-class but it’s not easy to get them to work together with their characteristics. With a lot of work, I think we managed it.

‘It was not a walk in the park. It was long, difficult, stressful, and this squad deserves a lot of credit for continuing to find the hunger and determination to keep going after eight wins in a row.’

Juve can target more silverware when they welcome Lyon for the second leg of their Champions League round of 16 tie on August 7, having lost the first leg 1-0 in France.