Fabio Cannavaro was once talking about a world-famous striker. ‘You hardly see him in the match. Then the next day to read the paper over breakfast and see that he scored twice against you.’

The Italy legend was speaking about Andriy Shevchenko, but the same could apply to Inter captain Mauro Icardi.

Argentine Icardi is perhaps the last of his kind, a striker who specialises predominantly in goals and isn’t fussed about touching the ball far from the confines of his comfort zone – aka the 18 yard box. At Champions League level it’s a style that began fading out after the retirements of Filippo Inzaghi and Michael Owen. 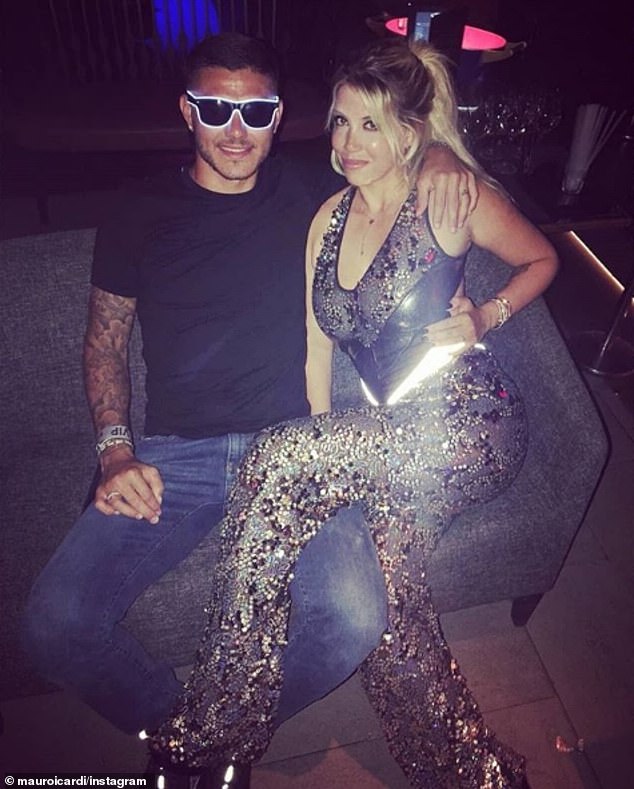 Icardi poses with glamorous wife Wanda Nara, who is an Argentine media personality 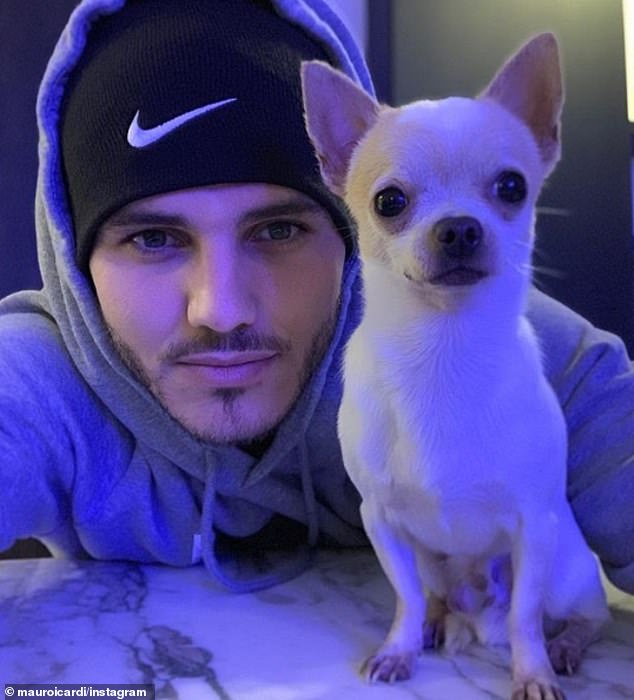 It’s a privileged position, and the fact modern coaches demand that all players work hard in the defensive and attacking phases has culled the opportunist, the poacher. But goals are still the highest currency in football, and if you provide them you’ll have a place in any team. Icardi says ‘the penalty box is my home.’

Last week the softly-spoken centre forward scored his first goal for Argentina in a 2-0 victory over Mexico. It was his eighth cap, and in his homeland they hope it’s the first of many in the famous sky blue and white stripes.

Icardi, 25, has been with the Nerazzurri since 2013, scoring 117 goals in all competitions. Captain since 2015, when he was only 22, Maurito as he is known, joined from Sampdoria. Previously he’d spent 2008 to 2011 working his way up through the Barcelona youth system.

When he was appointed Inter skipper it took people by surprise. He didn’t appear to have the personality for the responsibility. 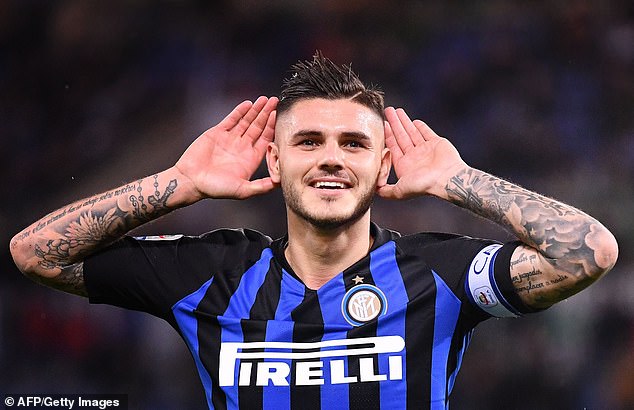 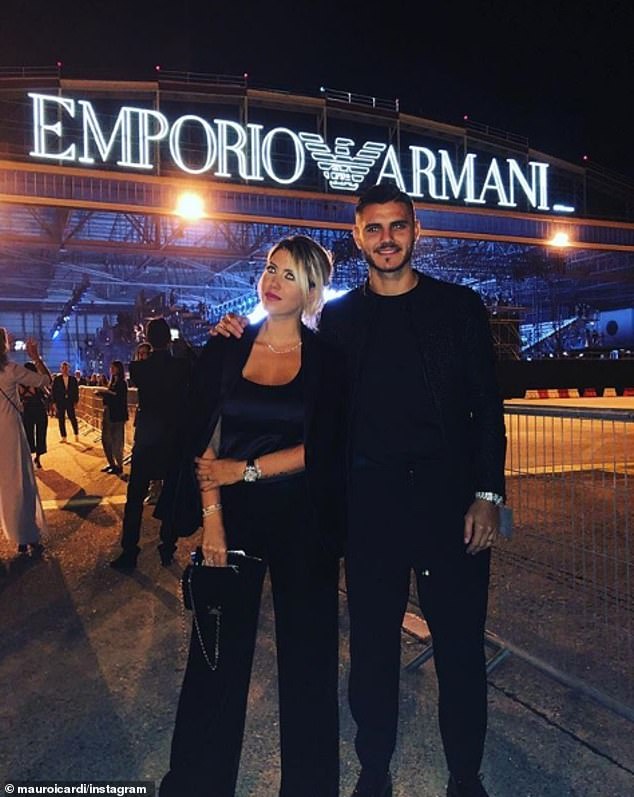 Icardi, who admits he likes ‘sports cars and watches’ poses with wife Wanda at a glitzy event 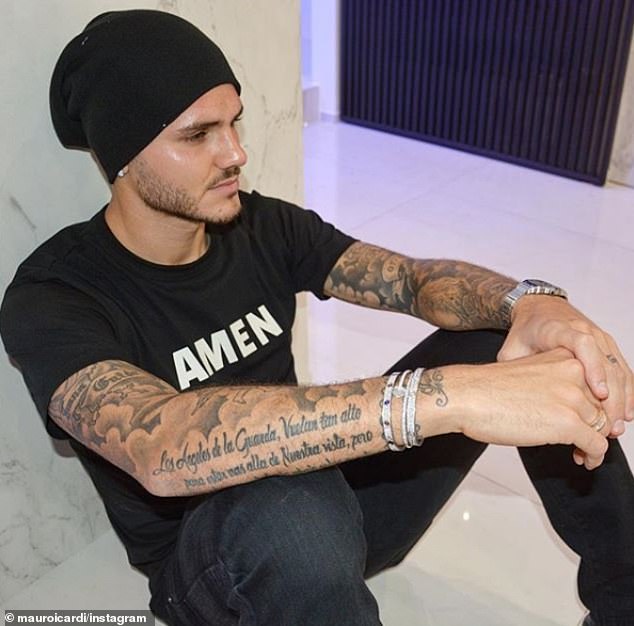 But the paucity of potential leaders in Roberto Mancini’s squad for the upcoming 2015-16 season was all too apparent. Slovenian goalkeeper Samir Handanovic was one option, but deemed a bit too unpredictable.

Maurito was awarded the armband, and his leadership style is centred around scoring important goals, and the occasional motivational shout. But not haranguing or rollocking team-mates. He is now the face of Inter across the world and an idol to fans.

Icardi is a devoted husband to Argentine media personality Wanda Nara, who is also his agent. She is a fixed guest on Mediaset football show ‘Tiki Taka’ and regularly talks about her husband.

Originally Nara was with another Argentine striker, Maxi Lopez, who was a friend of Icardi. But they split up and the Inter man is bringing up Lopez’s three sons.

Icardi and Nara have since had two of their own daughters. The two players no longer speak to each other.

The couple, their children and four pet dogs are social media stars. The striker boasts 4.3million followers on Instagram.

Icardi recently told Inter TV that he plans to put a shark in the aquarium of his 700 square metre home near the San Siro Stadium.

The South American happily confesses to having flash, non-sophisticated tastes, saying: ‘I like sports cars and watches, the other players make fun of me’.

Perhaps they won’t tease him after his generous act on Tuesday. He gave all his team-mates a Rolex to celebrate being last season’s Serie A top scorer, posing with his companions and the timepieces on his Instagram page.

Gabriel Batistuta and Samuel Eto’o are Maurito’s idols. Ex-Inter and Argentina striker Julio Cruz is a fan, telling Gazzetta dello Sport: ‘Mauro is a has got elements of Batistuta and Hernan Crespo. He is great with his head and feet and positioning, like Bati, and deadly like Crespo.’

While he keeps delivering the goals, he remains the epitome of the modern footballer – a media personality and fine player who makes the difference. There have been bumps in the road though.

In 2015 an unsightly spat between the skipper and the ultras led to an embarrassing episode. After the the Nerazzurri lost 3-1 at Sassuolo, Icardi went to the Inter fans and gave his shirt and shorts to a child.

He then claimed that an ultra chief snatched the jersey and threw it back at him, shouting ‘piece of s**t, giving your kit to children to try and ingratiate yourself with the fans. You should be ashamed. You should all be ashamed’.

In his biography ‘Always Forward’, an incensed Icardi wrote: ‘I could bring over 100 criminals from Argentina who would kill them (the ultras) on the spot’.

It didn’t stop there, with a series of offensive banners, and the hardcore fans even cheered when their captain missed a penalty against Cagliari in October 2016. The rest of the San Siro supported him throughout the match.

It’s a minority against the captain, however. His brilliant form over the last three campaigns, plus his promise to be careful about what he writes and says in future, has eased the situation.

A hat-trick in the derby last April helped, as did his late winner against Spurs in the Champions League. And naturally the 87th minute equaliser when Barcelona came to visit didn’t hurt.

Despite being only 25, Icardi is ninth on Inter’s all-time scorers list, and seventh among their Serie A hitmen with 107 (from 169 matches). Critics warned that the Champions League would be his first real test. He has scored three goals in four games – not bad for a debut campaign.

Spurs fans know all about his dramatic interventions. And even if he is rotten for 95 per cent of the tie at Wembley, the home supporters must remember that Icardi is a killer. An assassin from a bygone era, who seems anonymous, then snatches the winning goal.

Maybe that is why he covets a shark, because mutual respect among predators is plentiful.