Senator Ted Cruz (R-Texas) and constituent Mark Cuban challenged each other’s manhood in a Twitter spat on Monday after the billionaire Dallas Mavericks owner bemoaned the ‘National Anthem Police’ and appeared to support the idea of player protests when the season resumes next week.

Dallas-area radio host Mark Davis ignited the debate by tweeting that he was eager to see the Mavericks continue their season, that is, unless any of the players kneel in protest of racism during the national anthem.

‘The minute one player kneels during the anthem, I am OUT,’ Davis wrote on Twitter. ‘Surely @mcuban can lead the way for #Mavs, #NBA to do whatever gesture they wish without insulting the nation.’ 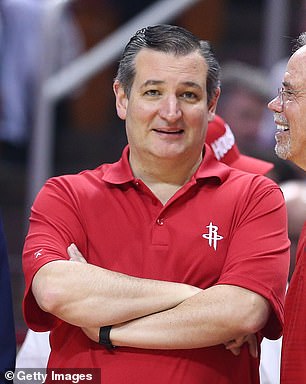 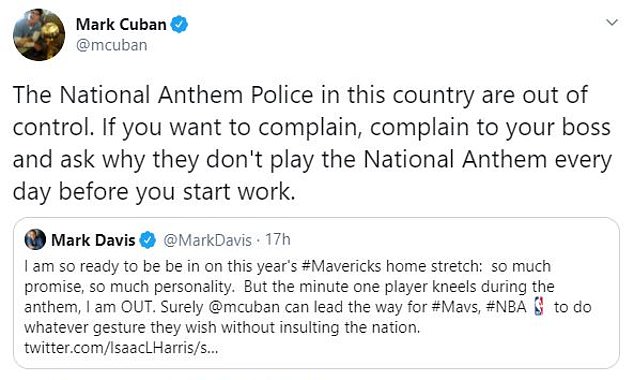 Dallas-area radio host Mark Davis ignited the debate by tweeting that he was eager to see the Mavericks continue their season, that is, unless any of the players kneel in protest of racism during the national anthem

Unlike NFL players, NBA players are required to stand for the anthem. However, many players will have social justice messages such as ‘Black Lives Matter’ emblazoned on the backs of their jerseys when the league’s 22-team restart begins in Orlando next week.

Davis responded to Cuban’s tweet, writing that the billionaire is a ‘wonderful guy’ who possesses ‘personal kindness,’ before excoriating him for his ‘[social justice warrior] politics.’

But it wasn’t Davis’s response that drew Cuban’s ire. Rather, it was Cruz, who suggested that the Mavs owner was attacking police and the military.

‘Really??!?’ Cruz tweeted. ‘NBA is telling everyone who stands for the flag, who honors our cops and our veterans, to “piss off”? In Texas, no less?

‘Good luck with that.’

Cuban shot back: ‘Have some balls for once @tedcruz. Speak to me. It’s my tweet.’

Cruz, a Rockets fan, defended himself by asking for Cuban’s thoughts on China — a reference to the controversy that ignited when Houston general manager Daryl Morey tweeted support for anti-Beijing protestors in Hong Kong before the season.

As a result, league games were blacked out in the country amid anti-NBA demonstrations, while Hong Kong activists targeted All-Stars LeBron James and Russell Westbrook for their perceived kowtowing to China’s government.

‘Speaking of balls, tell us what you think about China,’ Cruz wrote, suggesting that Cuban would be prevented from responding. ‘I’ll wait.’

‘Can your players put that on their jerseys?’

‘Can you condemn the CCP’s concentration camps w/ 1 million Uyghurs?

‘Can you say ANYTHING other than ‘Chairman Mao is beautiful & wise’?’

The billionaire then included a link to video of him criticizing China’s government and calling on the US to ban initial public offerings for Chinese corporations.

Cuban wasn’t done with Cruz, though, and quickly challenged his allegiance to President Donald Trump.

‘Why is it, @tedcruz, that you take such pride in standing up to and speaking truth to the Chinese, but you have no ability to stand up to and speak the truth to @realdonaldtrump?’ Cuban asked.

Cruz responded by reminding his followers where the coronavirus outbreak began: ‘Where did that pandemic originate? Why did Communist China COVER UP the Wuhan outbreak & arrest whistle-blowers?’

China has denied the accusation that it covered up the outbreak, while Trump’s White House has regularly repeated the claim.

In retaliation, Trump has recently considered banning Chinese Communist Party officials and their families from traveling to the United States, according to Reuters.

As for player protests, Cuban has been on both sides of this issue.

He recently expressed a desire to change league rules to allow protests, saying he would kneel alongside his players.

However, in 2017, Cuban said would continue standing for the anthem and he expected his players to do so as well.