Theresa May is engaged in a desperate damage limitation exercise today as she stares down the barrel of defeat on her Brexit deal.

The Prime Minister is on track for a humiliating trouncing when the package she has thrashed out with the EU is put to MPs on December 11 – amid overwhelming opposition from scores of Tories, Labour, the SNP and the Lib Dems.

However, Mrs May’s allies are already laying the ground for her to bring the package back to Parliament for a second vote.

They are said to be hoping she can survive losing a first Commons showdown scheduled for December 11 – as long the margin can be kept below 100 MPs.

The plan emerged as Cabinet Office minister David Lidington sent a stark message to mutinous Conservative MPs that the public will punish them for ‘squabbling’ over how to leave the EU.

And he insisted the PM will not need to quit if her package is defeated – saying switching leader would do nothing to change the ‘fundamental’ problem facing the country.

Mrs May (pictured meeting agricultural producers in Wales) is on track for a humiliating trouncing when the package she has thrashed out with the EU is put to MPs on December 11 – amid overwhelming opposition from scores of Tories, Labour, the SNP and the Lib Dems

More moderate Conservatives broke cover overnight to condemn the deal, with former ministers Sir Michael Fallon and Tracey Crouch making clear they will not support it.

Only around 20 Labour MPs turned up for a briefing with Mr Lidington and No10 chief of staff Gavin Barwell on the deal last night.

Opposition backbenchers Mrs May had hoped to win over, such as Gareth Snell and Lisa Nandy, have also signalled they are not on board.

Government aides told Buzzfeed they will still be ‘in the game’ if they keep the margin below that and have a chance of winning a second clash before Christmas.

The plan emerged amid frantic efforts by Mrs May, loyal ministers and government whips to turn the tide.

In a round of interviews, Mr Lidington admitted that Mrs May would almost certainly lose of the Commons vote was held today.

But he insisted she still has two weeks to win round doubters. He urged colleagues to recognise the ‘reality that there is not some sort of perfect alternative that meets all their wishes and first preferences’.

Asked if Mrs May would be forced to resign if she is defeated in Parliament, he told Sky News: ‘I don’t see that the fundamentals can be changed by gossip about changing a party leader.’

Pointing out that no-one knows what will happen if the deal does not go through, Mr Lidington warned that the ‘one thing’ the public notice about political parties is when they are ‘divided and squabbling’.

‘That is the lesson we learned as the Tory Party in the years running up to the landslide defeat in 1997,’ he added. 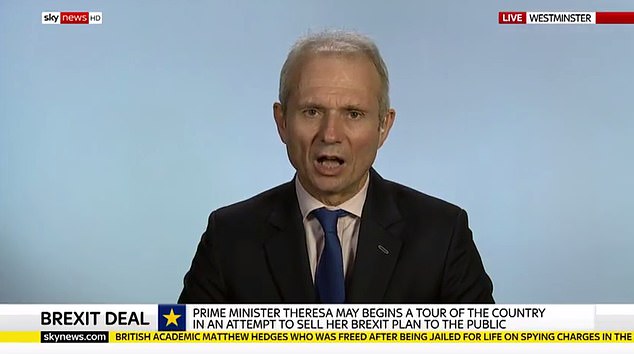 Mrs May suffered another blow last night as Donald Trump savaged her deal as ‘great for the EU’ – and warned it would hit trade with the US.

No10 furiously rejected the dramatic intervention from the President – which echoed the complaints of Brexiteers and threatened to kill off the package altogether.

As the PM’s allies reeled from the blow, one government minister highlighted a tweet claiming Mr Trump was aiming to ‘finish off’ Mrs May.

Mr Lidington said bluntly that the President was ‘wrong’.

But senior Tories and Eurosceptics seized on the extraordinary intervention from the White House with glee – saying it could not be ‘brushed off’ and Mrs May must reopen negotiations with Brussels.

Tory Maria Caulfield said: ‘It is so disappointing that after Gavin Barwell faithfully promised me and many other colleagues that Number 10 would never try to gain Labour MPs support against us as a party, it seems they have gone back on their pledge.

‘Not least because doing so would destroy the government. Yet now Number 10 is trying to do what it swore it never would.’