May and Corbyn edge closer to a Brexit compromise

Are May and Corbyn edging closer to a Brexit compromise? PM says pair have ‘more agreement in relation to customs union’ after Commons meeting

Theresa May edged closer to a compromise with Labour on a customs union last night as she resumed Brexit talks with Jeremy Corbyn.

The two met in Parliament hours after Mrs May told MPs there was ‘more agreement in relation to a customs union than is often given credit’.

The Labour leader also suggested the talks – which have now lasted nine days – were making progress.

He said: ‘I welcome the indications from the Government that they may be willing to move in the key areas that have prevented the Prime Minister’s deal from being supported on this side.’

Addressing MPs after agreeing the Halloween Brexit extension, Mrs May said it was ‘in the national interest’ to reach a consensus.

She added: ‘This is not the normal way of British politics and it is uncomfortable for many in both the Government and opposition parties.

‘Reaching an agreement will not be easy, because to be successful, it will require both sides to make compromises.

‘But however challenging it may be politically, I profoundly believe that in this unique situation where the House is deadlocked, it is incumbent on both front benches to seek to work together to deliver what the British people voted for.’

Mrs May said she hoped to agree a ‘single unified approach’ with Labour. If this fails, she will ask Mr Corbyn to agree a process that would see both sides accept the outcome of a series of votes on Brexit options, including a customs union.

The PM also outlined a third option involving bringing forward the Withdrawal Agreement Bill, which would ratify her Brexit deal, and allowing MPs to vote on amendments to it as it progresses. 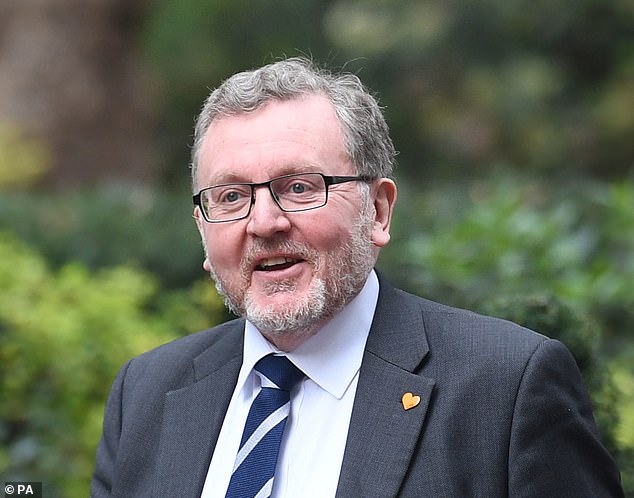 Tory MP Conor Burns, an ally of Boris Johnson, said the talks with Labour amounted to ‘two Remainers debating how to compromise on something that really isn’t even Brexit’, adding: ‘This has moved beyond embarrassing to humiliating’.

NO DEAL Brexit plans were called off last night as the Government stood down 6,000 civil servants who were due to implement them.

The cost of preparing to leave the EU without an agreement had been estimated at £1.5 billion.

But after Theresa May struck an agreement to delay Brexit, civil servants seconded from elsewhere have been able to return to their normal roles.

Labour MP Hilary Benn, chairman of the Brexit select committee, said it was a ‘costly price’ to pay for the PM’s negotiating stance of keeping No Deal on the table. Downing Street said it continued to make ‘all necessary’ Brexit preparations.

But other senior Tories backed Mrs May. Scottish Secretary David Mundell said the Government was ‘certainly willing’ to discuss a customs union compromise with Labour.

And ex-minister Andrew Murrison suggested a customs union would be a price worth paying for getting a deal through.

Attorney General Geoffrey Cox suggested that the Tories would even discuss the possibility of a vote on a second referendum, a key demand of Labour activists.

However, the DUP hinted it could pull the plug on the Government if Mrs May tries to keep her Brexit deal alive.

Their ‘confidence and supply’ deal with the Tories is up for renewal at the end of the parliamentary session, due in June.

Sources say the DUP could refuse to back the Queen’s Speech if it contains Mrs May’s deal – providing an incentive for the Government to keep the session going.