May bank holiday meltdown! Temperatures are set to soar to 77F on VE Day

Britons are set for a scorching May bank holiday with temperatures rocketing to 77F (25C) on VE Day as a plume of hot air from the southern Mediterranean wafts across the nation.

Today will see the mercury hitting up to 66F (19C) as warmth builds throughout the week, according to the Met Office.

Conditions will remain widely dry and sunny tomorrow, with isolated rain showers in the afternoon.

The weather service forecast ‘very warm’ temperatures for Friday and Saturday before turning ‘much colder’ over the weekend as wintry showers develop in the northeast.

A female jogger taking her daily exercise during the coronavirus lockdown on Calton Hill in Edinburgh today. The tourist destination was virtually deserted with only local joggers and dog walkers out enjoying the sunshine 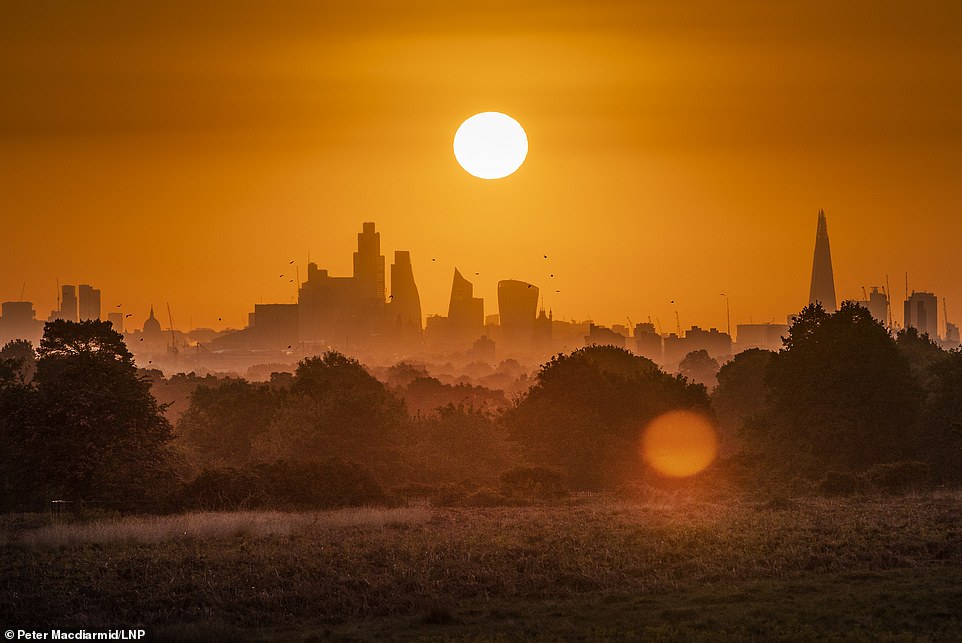 The sun rises over the City of London, heralding the start of the next few days as warm temperatures build throughout the week leading up to the May bank holiday weekend, before conditions turn ‘much colder’ on Sunday 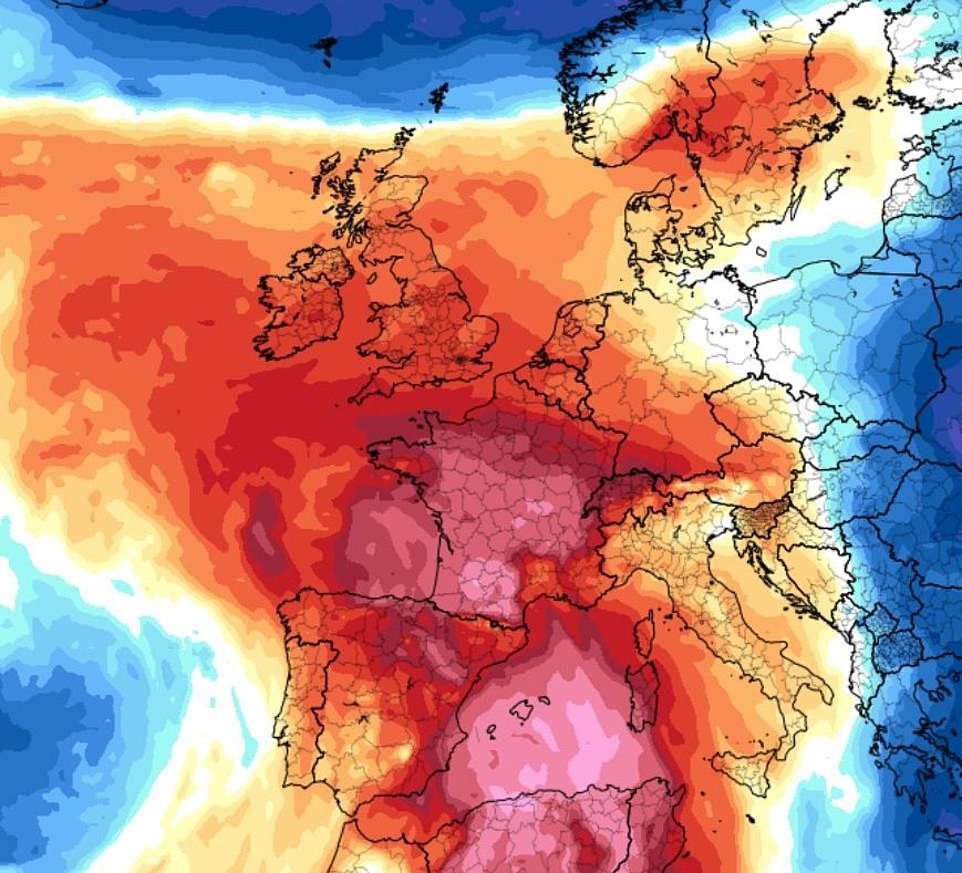 The map, above, shows warm air rising from the south towards the UK on Friday. The Met Office forecast ‘very warm’ temperatures for Friday and Saturday, with the mercury hitting highs of up to 79F (26C) 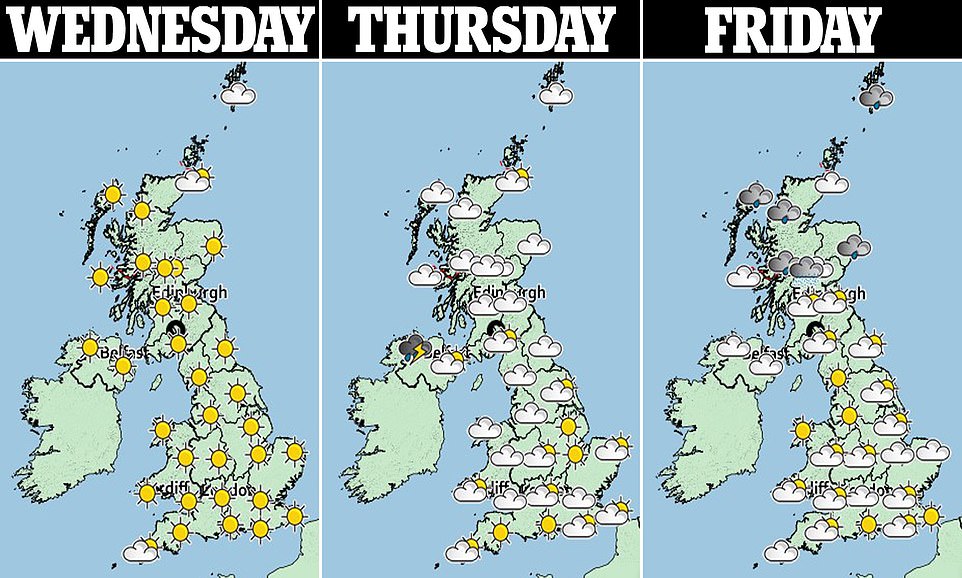 Saturday may be ‘slightly’ warmer than Friday, with temperatures in London hitting up to 79F (26C).

A Met Office spokesperson told MailOnline: ‘Warm air is coming in from the south which is bringing the warmer temperatures – likely to be temperatures in the mid-20s for Friday and Saturday, London could possibly see 26C in the south-east corner.

‘But then on Sunday we see cold air pushing in from the north, Greenland area really bringing a marked change in temperature, we see temperatures go down. On Saturday London could see 26C but on Sunday could easily be 14C, so a great contrast.

‘Saturday is marginally slightly warmer, there’s not much in it – may be a chance of 26C in London on Saturday. But with warm weather comes risk of heavy rain showers, some of those could be thundery as well.

‘Then as we go into next week we’ve got high pressure in charge, meaning settled weather – fine, dry weather but these cooler temperatures will continue.’

BBC’s Matt Taylor forecast temperatures to hit up to 77F (25C) on Friday and ‘widely into the high teens and low 20s’ as the heat intensifies during today and tomorrow. 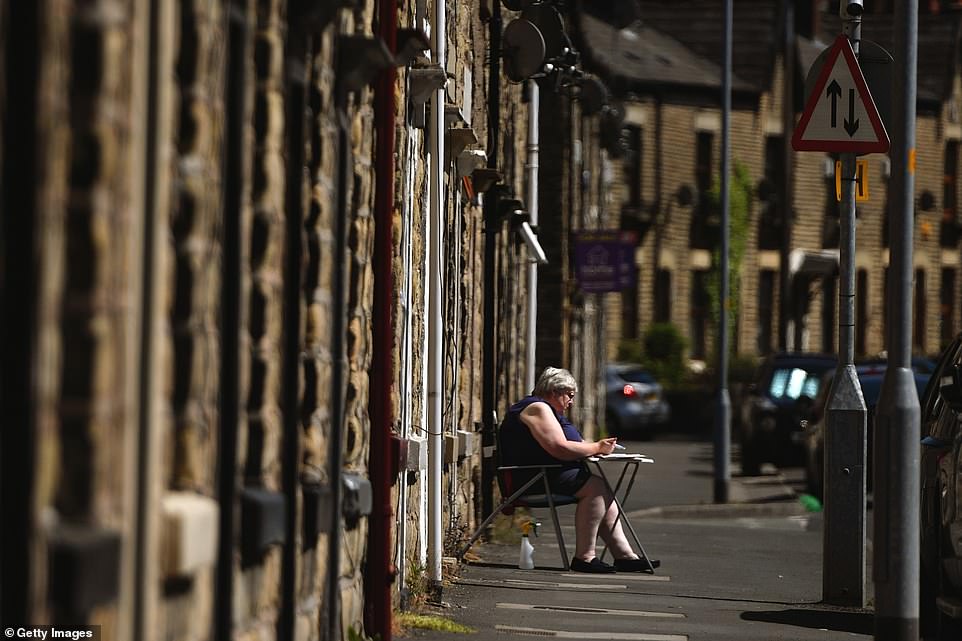 A woman fills out a crossword in the sunshine outside her home in Manchester as people continue to self-isolate during the pandemic. The UK is continuing with quarantine measures to curb the spread of the virus but as the infection rate is falling officials are discussing terms under which they would ease the lockdown 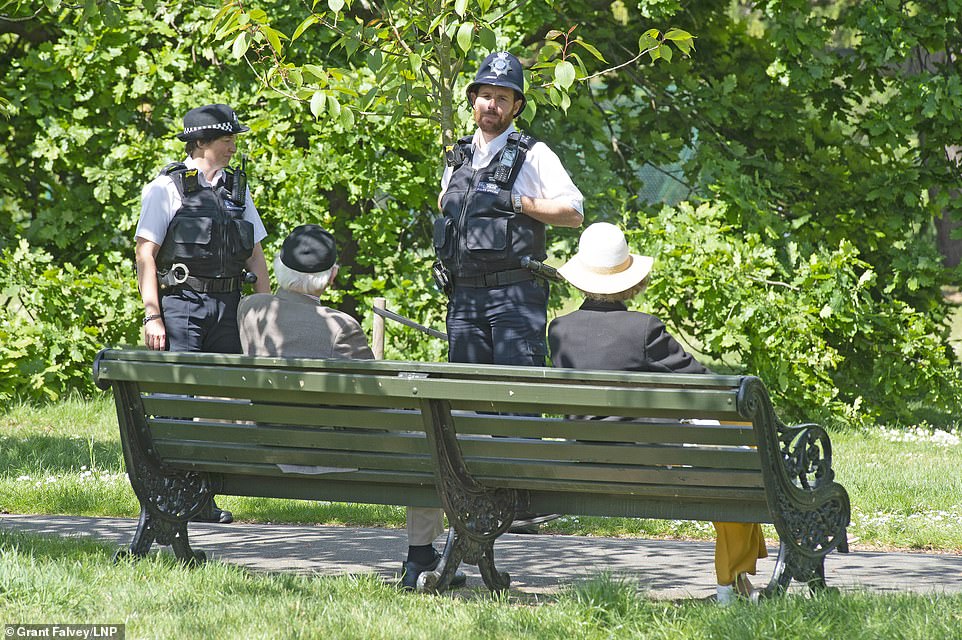 Two police officers pictured on patrol in Greenwich park, London, asking people to move on and not sit on the bench. Coral bookmaker has cut the odds of Friday being the hottest ever May bank holiday in the UK from 2-1 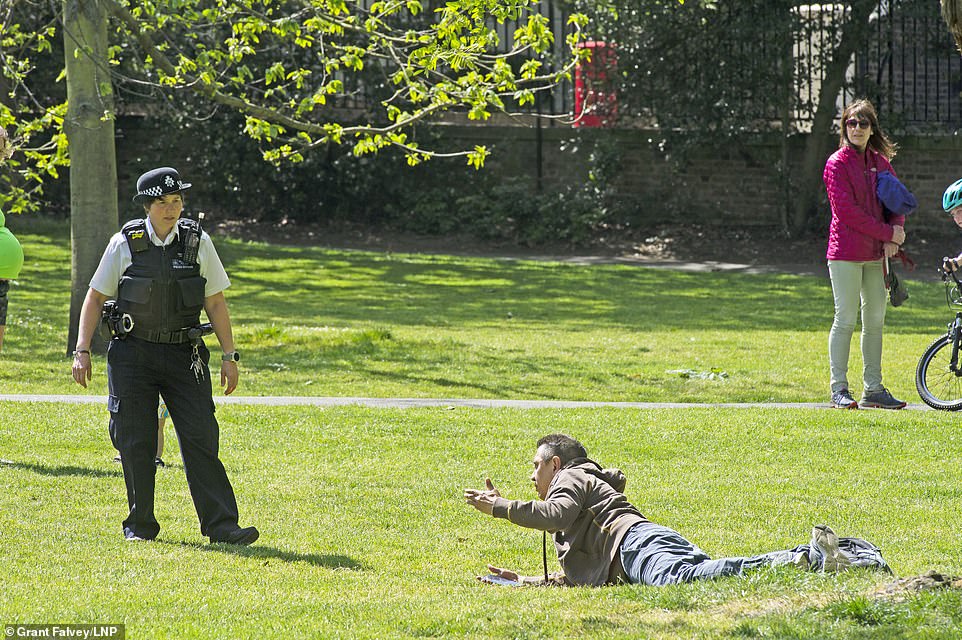 A police officer on patrol asks a man to move on as people enjoy the warm, sunny weather in Greenwich park in Greenwich, London. It follows last month seeing the sunniest April since records began in 1929 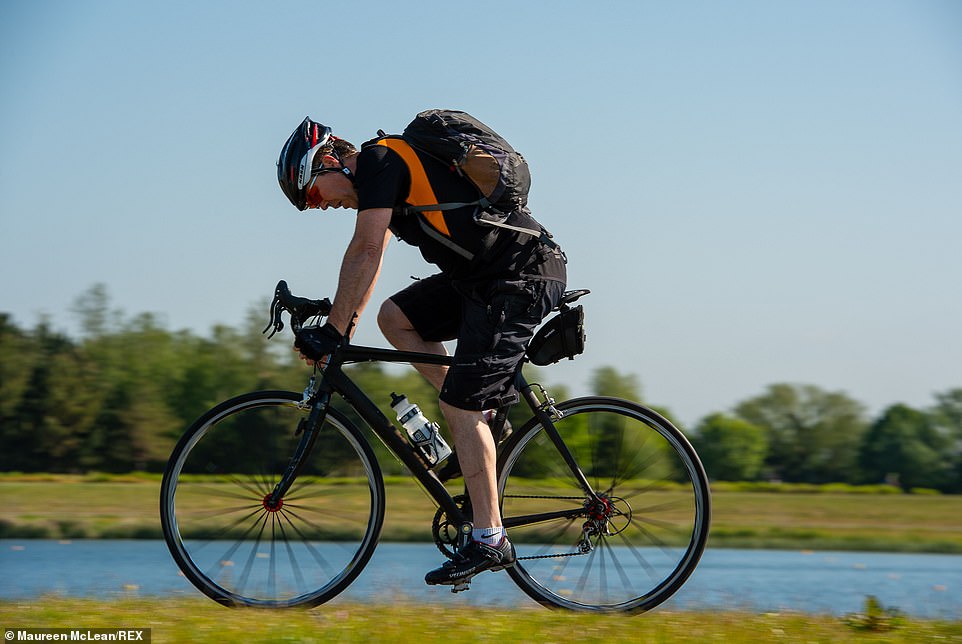 A cyclist takes his daily exercise during the coronavirus lockdown on a warm, sunny morning at Dorney Lake in Buckinghamshire, where the rowing was held in the Olympics in 2012 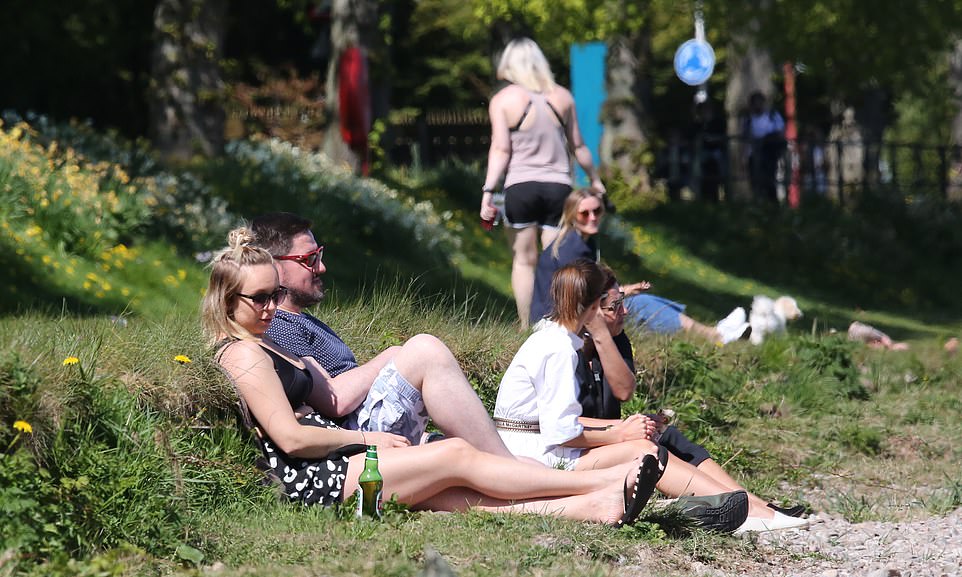 People sitting outside having a beer on the banks of the River Ness in Scotland today, despite ongoing lockdown measures warning the public not to leave home other than for daily exercise and essential food shopping 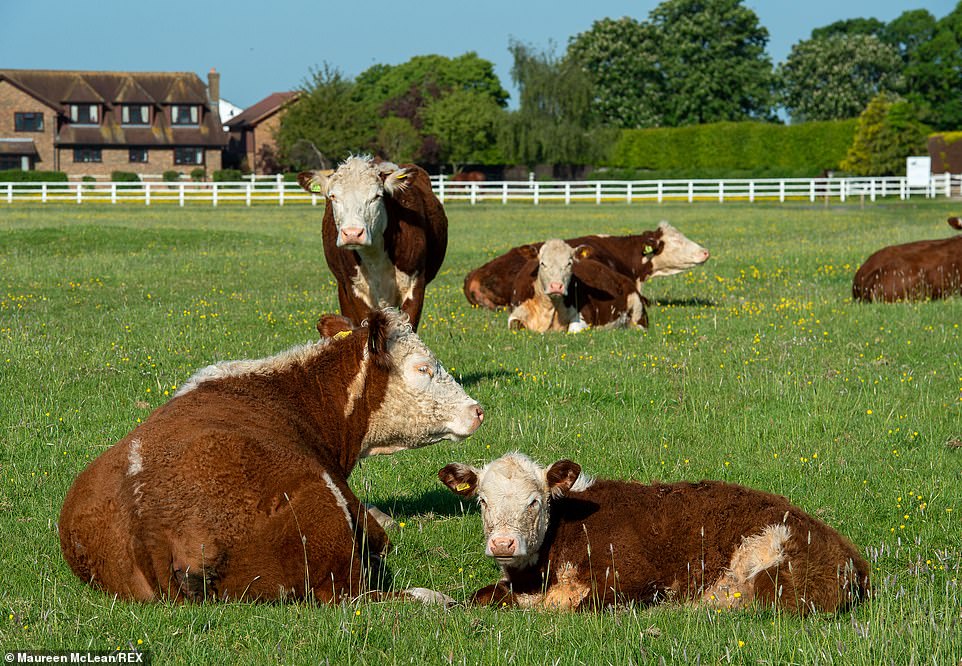 Cattle graze and snooze in the early morning sunshine on Dorney Common on a warm Spring day. Saturday may be ‘slightly’ warmer than Friday, with temperatures in London hitting up to 79F (26C) 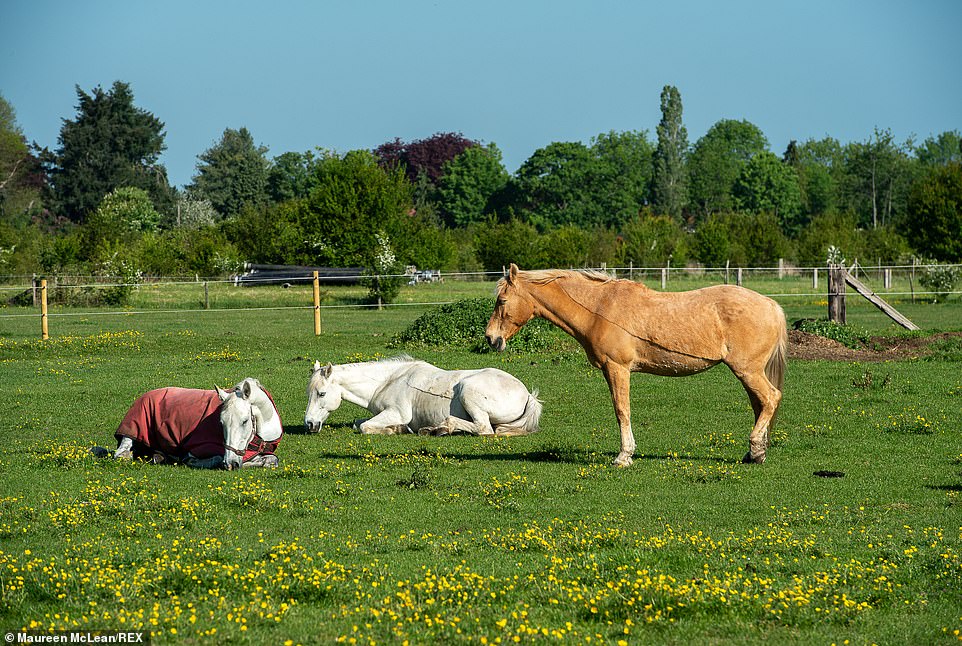 Horses rest in a field full of buttercups on a sunny morning in Dorney, a village in the South Bucks district of Buckinghamshire. The warmth is set to be short-lived, with temperatures dipping on Sunday

He said: ‘Certainly some big changes ahead later this week.

‘Over the next few days the warmth builds, by VE Day, Friday, we could see temperatures widely into the high teens, low 20s, maybe 25C in the south-east corner.’

But the warmth will be short-lived, with the mercury plunging over the weekend as Arctic air blasts the nation.

Mr Taylor added: ‘Over the weekend though a surge of Arctic air returns and some of you will struggle to get double figures.

‘Even a few snow showers across the north and east of Scotland. That’s a few days away, out there at the moment it’s a case of blue skies for the vast majority.’

Brian Gaze from The Weather Outlook said: ‘A plume of very warm air from Spain means the VE Day holiday could see 25C.

‘But thunderstorms are a risk and an exceptionally cold plunge of polar air follows on Sunday.’ 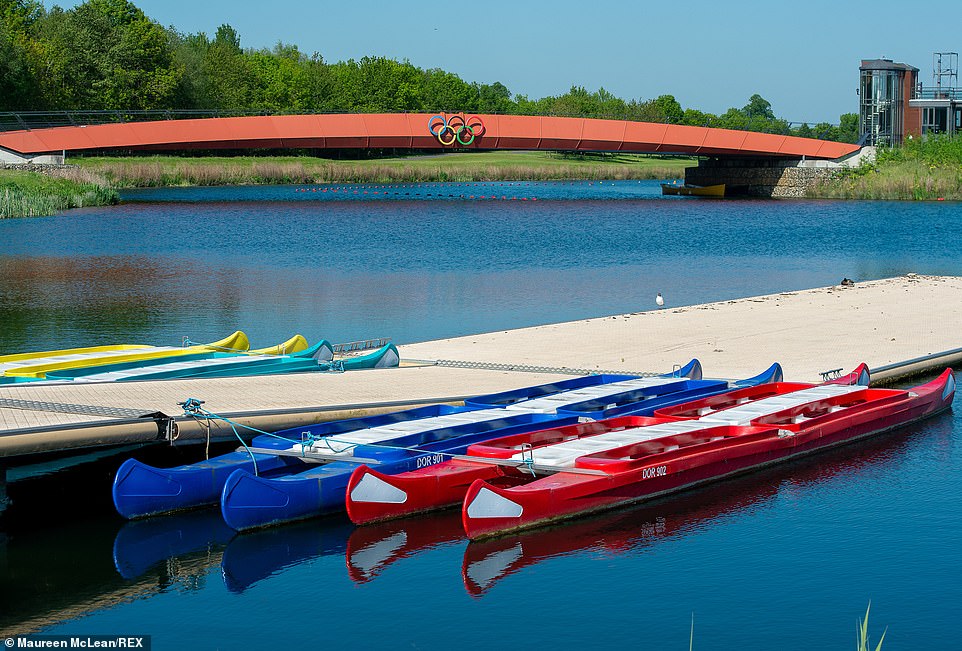 Dorney Rowing Lake, the venue for rowing at the 2012 Olympics, pictured still and calm this morning with a gentle breeze and warm sunshine. Today will see the mercury hitting up to 66F (19C) as warmth builds throughout the week, says Met Office 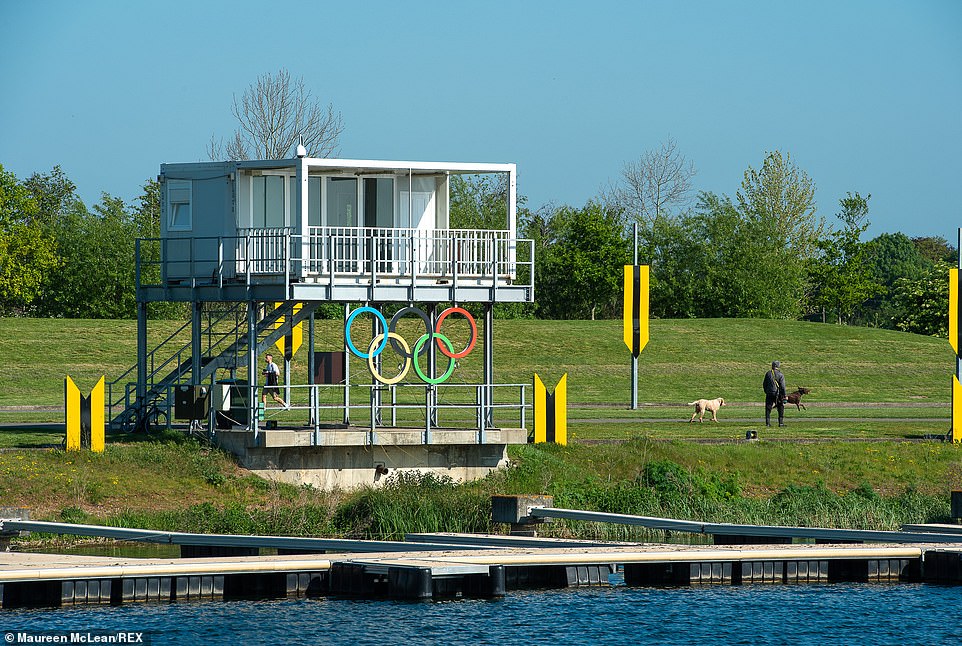 People take their daily exercise and walk their dogs during the coronavirus lockdown on a warm, sunny morning at Dorney Lake in Buckinghamshire, the venue for the rowing at the Olympics in 2012 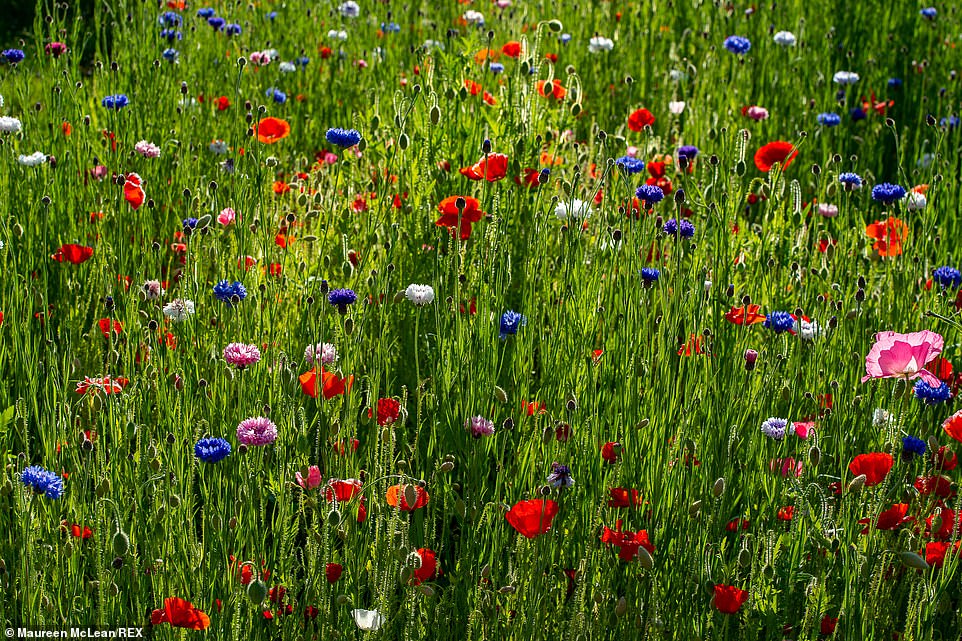 Vibrant wild flowers captured in the early morning sunshine today. The Royal Borough of Windsor and Maidenhead Council have agreed to the planting of the wild flowers to encourage biodiversity amid the coronavirus lockdown 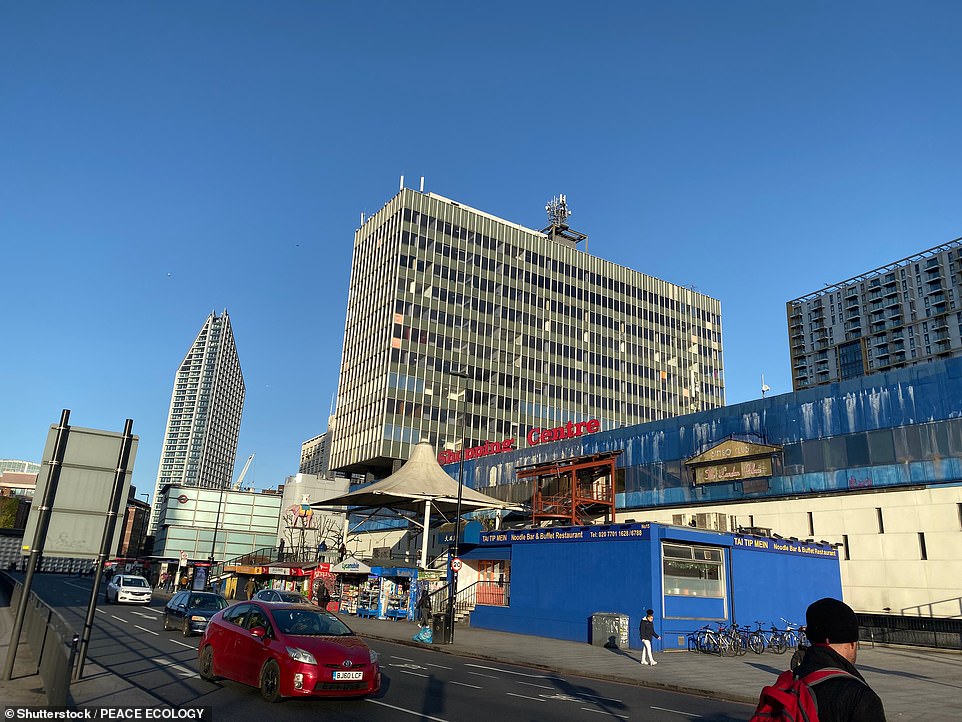 Elephant and Castle shopping centre and surrounding urban architecture in Southwark, London, with the road and cars pictured in the bright sunshine and blue skies as temperatures become warmer ahead of Friday

Meanwhile, Coral bookmaker has cut the odds of Friday being the hottest ever May bank holiday in the UK from 2-1, with the firm also offering 1-2 for 86F or higher between VE Day and Sunday.

Coral’s John Hill said: ‘With temperatures set to rise over the new few days, we have slashed the odds on Friday being the hottest May bank holiday we have ever had in the UK.

‘We are also odds-on for temperatures reaching 30C or higher over the bank holiday weekend.’

The second week of May will have the ‘best chance’ of more ‘settled and drier’ periods with the ‘chance of thundery showers’ for a few days.

Conditions then look ‘mixed’ until the end of the month, according to the Met Office’s long-term forecast.

It follows last month seeing the sunniest April since records began in 1929.