May ‘could meet Putin at G20 summit’

May ‘could meet Putin at G20 summit’: Bid to thaw UK-Russia relations in the wake of Salisbury nerve agent atrocity

Theresa May could meet Vladimir Putin at the G20 summit as the two sides scramble for a way to thaw relations in the wake of the Salisbury nerve agent atrocity.

The PM and the Russian president are considering hold face-to-face talks during the gathering in Japan at the end of the month over how to stabilise ties between the countries.

If the encounter goes ahead it will be the highest-level contact since Britain’s relations with Russia were plunged into the deep freeze by the poisoning of former spy Sergei Skripal and his daughter Yulia in Salisbury in March 2018.

The UK insisted the Novichok nerve agent used could only have been sourced by Russia, and identified two agents believed to have carried out the attack.

Mrs May also claimed the operation must have been approved at the highest level in Moscow – which has denied any involvement.

The international backlash resulted in an the biggest round of tit-for-tat expulsions of diplomats since the height of the Cold War.

British officials are believed to have started looking at the idea of a meet with Mr Putin after his comments during an interview over recent weeks.

‘When all’s said and done we need to turn this page connected with spies and assassination attempts,’ Mr Putin told journalists.

‘We need to forget about all this in the final analysis,’ he said.

Downing Street sources played down the idea of talks, insisting it was ‘way to early’ to say what meetings would take place. 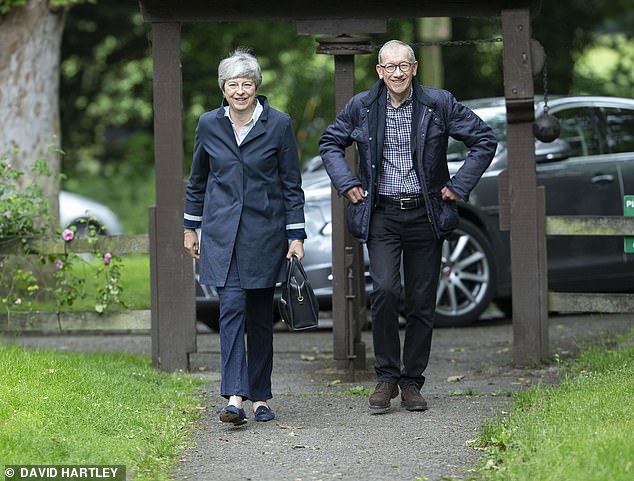 Downing Street sources played down the idea of Mrs May (pictured at church with husband Philip yesterday) agreeing to talks, insisting it was ‘way to early’ to say what meetings would take place