Ian Austin today became the ninth Labour MP to quit the troubled party, saying he had become ‘ashamed’ of it under the leadership of Jeremy Corbyn.

The 53-year-old Dudley North MP, whose adoptive father was Jewish, lashed out at anti-Semitism directed at MPs including Luciana Berger and Dame Margaret Hodge.

He attacked the ‘offence and distress’ caused to Jewish people by the party under Mr Corbyn’s leadership, telling his local Express and Star newspaper that he could not ask local people to make the opposition leader Prime Minister.

He said: ‘The Labour Party has been my life, so this has been the hardest decision I have ever had to take, but I have to be honest and the truth is that I have become ashamed of the Labour Party under Jeremy Corbyn.’

Ian Austin, whose adoptive father was Jewish, hit out at the ‘offence and distress’ caused to Jews by Labour under Jeremy Corbyn’s leadership 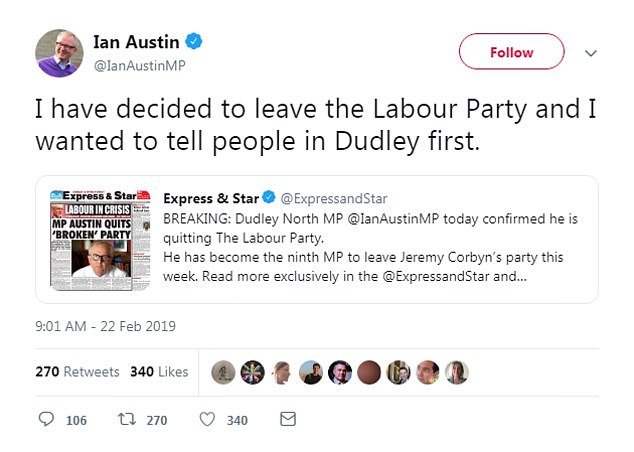 Mr Austin used an interview with the Express and Star newspaper in his constituency to break the news of his departure from Labour. The party called on him to contest a by-election as it has with the other MPs who have left this week

But he said that he had no plans to join the Independent Group set up by the other eight former Labour MPs, and three Tories who walked out earlier this week.

‘I think the Labour Party is broken and clearly things have to change but that’s not what today is about, and I’ve not talked to them about that,’ he said.

He told the E&S that ‘the hard left is now in charge of the party’ and he could not see a way for it to return to the political mainstream with its current leadership.

‘It is terrible that a culture of extremism, anti-Semitism and intolerance is driving out good MPs and decent people who have committed their life to mainstream politics,’ he said.

‘The hard truth is that the party is tougher on the people complaining about anti-Semitism than it is on the anti-Semites.’

Labour called for Mr Austin to quit as an MP and contest a by-election, with a party spokesman saying: ‘He was elected as a Labour MP and so the democratic thing is to resign his seat and let the people of Dudley decide who should represent them.’

Ian Austin’s long-running battle with Jeremy Corbyn over anti-Semitism in the Labour Party has been shaped by his background as the adopted son of a Jewish father forced to flee the Nazis.

Before being elected as MP for Dudley North in 2005, he was an adviser to then-Chancellor Gordon Brown.

His alliance with Mr Brown continued when he entered Parliament, becoming his ministerial aide and then a minister for West Midlands regional affairs.

He was never likely to see eye-to-eye with Mr Corbyn, a leader from the left of the party who made no secret of his discontent with the Blair-Brown New Labour era.

The issue of anti-Semitism, which has dogged Mr Corbyn’s leadership, was the main focus of tensions between the pair.

Mr Austin’s Jewish father Fred was 10 when the Nazis marched into Ostrava in the former Czechoslovakia.

Four days later he was put on a train to England – the only member of his family able to leave – and he never saw them again.

He grew up to become a headmaster and adopted four children – including Mr Austin.

This background had a profound influence on Mr Austin and was cited as his main reason for quitting Labour.

‘He was elected, like me, in 2017 at the General Election, on a manifesto that pledged to deal with poverty, injustice and inequality in Britain.

‘That’s how he was elected, that is how I was elected, and I think we should be campaigning on those issues.’

However Tom Watson, the party’s deputy leader and a fellow West Midlands MP, paid a more heartfelt tribute, saying Mr Austin’s resignation was a ‘serious blow’ to the party.

‘It’s also personally hard to see a close friend take a decision of this magnitude,’ he added.

Shadow chancellor John McDonnell acknowledged ‘fiercer’ action was needed on anti-Semitism, telling the Evening Standard: ‘I think there’s been a lot of listening but not enough action. That’s the problem.’

But Mr Austin was sceptical about the leadership’s desire to address the issue.

‘The last time I tried to speak to John McDonnell it wasn’t a very long conversation on his side and I wouldn’t repeat the words he used,’ he said.

‘Why weren’t they listening when thousands of Jewish people protested against the Labour Party in Parliament Square?’

Former Labour MPs Luciana Berger, Chuka Umunna and Chris Leslie – who were among those who left to form the Independent Group this week – offered support to Mr Austin after his announcement.

Ms Berger tweeted: ‘I fully understand why @IanAustinMP has come to this difficult and painful decision.’

Mr Leslie wrote: ‘Full respect for @IanAustinMP and his difficult decision to leave @UKLabour today. Politics is broken and it is so important MPs stand up for the mainstream values we share.’ 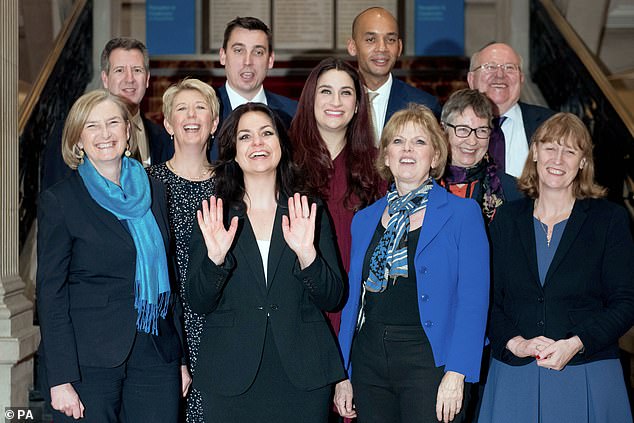 Mr Austin’s resignation from Labour brings the number of MPs who have quit the two main parties this week to 12. But he said he had not spoken to the other 11 about joining the Independent Group they have set up 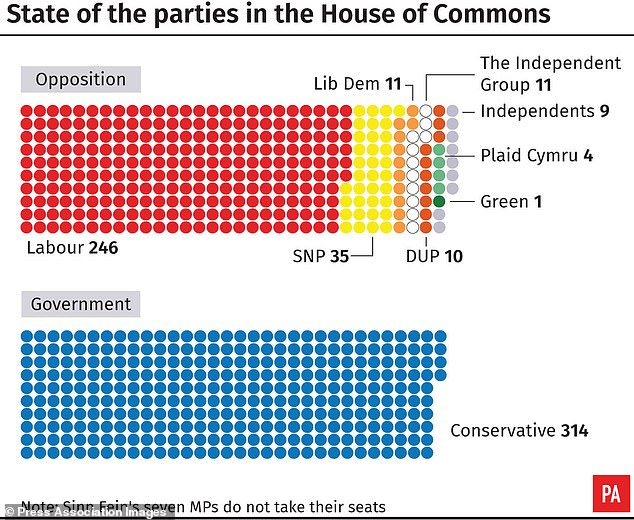 How the parties look in Parliament following Mr Austin’s decision to quit Labour. The largest opposition party is now down to 246 seats after losing nine MPs this week, 68 behind the Conservatives, who have lost three

And Mr Umunna posted: ‘Massive respect to @IanAustinMP for making this incredibly difficult decision – it’s painful and hard but he has stayed true to his values and what he believes to be the national interest.’

Mr McFadden, who represents Wolverhampton South East, said: ‘He has been in the Labour Party his whole adult life. It is completely tragic that he has concluded he has to leave Labour because of what it has become.’

News of his departure came as Theresa May faced the most serious revolt of her premiership as up to 100 MPs  pledge to vote to delay Brexit unless she takes No Deal off the table.

Rebel Tories now sense there are enough MPs across the House of Commons to pass the Cooper Amendment – which extends Article 50 beyond the departure date of March 29 – due to be debated on Wednesday.

Four Cabinet ministers were said to have confronted the Prime Minister yesterday and warned they are prepared to vote for the motion proposed by the Tory MP Sir Oliver Letwin and Labour’s Yvette Cooper.

It’s claimed as many as 25 junior ministers and many others in the government are prepared to do the same to prevent crashing out of the EU without a deal. 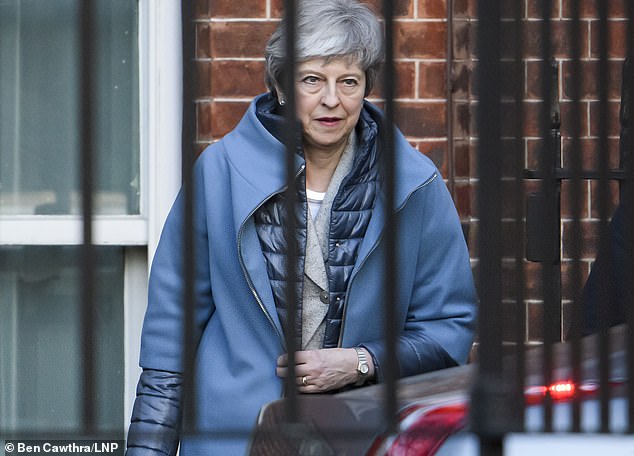 A well-placed source told the Guardian the move will challenge May to sack the rebels who have no intention of resigning voluntarily.

One cabinet Pro-Brexit MP told the paper if it came to the vote, May would have to get rid of rebellious ministers.

‘It would be a huge mistake not to sack them. It would be effectively conceding we had lost control of the party,’ they said.

Meanwhile, Chancellor Philip Hammond yesterday refused to rule out resigning over the issue, describing No Deal as an ‘extremely bad’ outcome he was working ‘all day, every day’ to prevent. 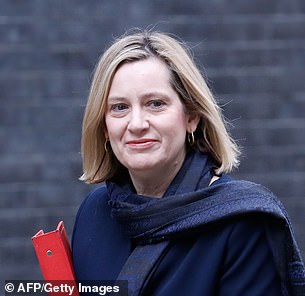 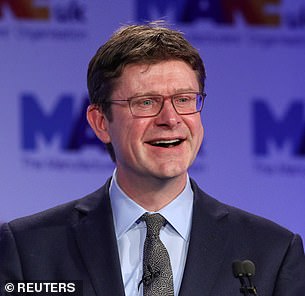 Four cabinet ministers are warning Mrs May against a No Deal Brexit. Amber Rudd (left) and Business secretary Greg Clarke (right) haven’t ruled out resigning in the event of No Deal 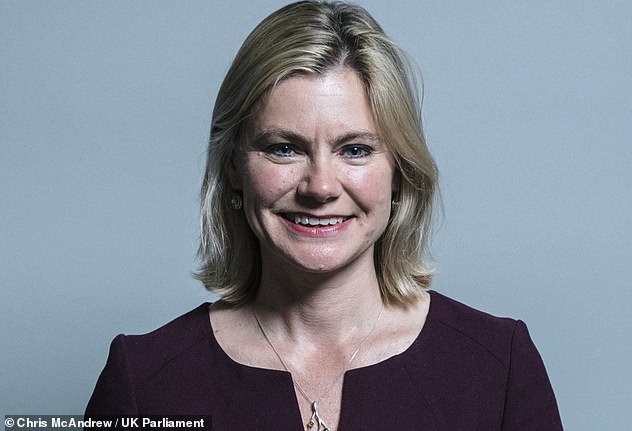 Former Tory education secretary Justine Greening told BBC Radio 4: ‘I don’t think I would be able to stay part of a party that was simply a Brexit party that had crashed us out of the European Union’

And two former Tory ministers – Justine Greening and Dominic Grieve – issued public threats to quit the party altogether if Mrs May pursues a No Deal Brexit.

The Prime Minister is under pressure to get a withdrawal agreement passed in the Commons by next Wednesday or, if there is no prospect of an agreement being voted through, face a vote where MPs could force her to seek a delay to Brexit.

However, it was not clear whether those who did revolt would resign their Government posts, or if the PM would sack them. 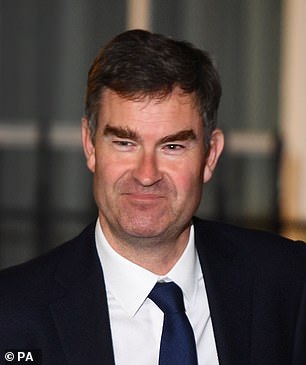 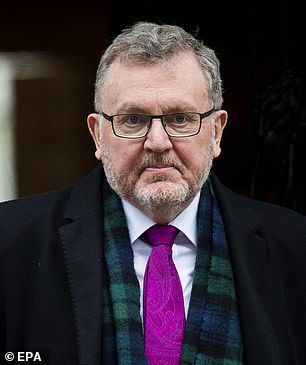 The motion to block No Deal by seeking a Brexit delay is likely to be proposed by Tory MPs Nick Boles and Sir Oliver Letwin and Labour’s Yvette Cooper.

Mr Mundell did not deny this yesterday, saying: ‘I don’t comment on private conversations I’ve had with the Prime Minister, but what I’ve said to her repeatedly and what I’ve said to Cabinet is that a No Deal Brexit is a very bad outcome for Scotland and the UK and we must do everything we can to avoid that.’

Miss Greening and Mr Grieve yesterday both issued threats that they could quit the Conservative Party altogether in the event of the Prime Minister taking the country toward No Deal.

Asked if she could follow the three Tory defectors who quit the party on Wednesday, Miss Greening, a former education secretary, told BBC Radio 4’s Today programme: ‘It is something that I have considered, but I have reached a different conclusion for the moment.

Meanwhile, Jeremy Corbyn has also been warned he’s facing a second exodus of MPs unless he backs a second referendum.

The Labour leader was told yesterday that dozens of MPs, including shadow ministers, will threaten to join the new Independent Group in parliament or resign. 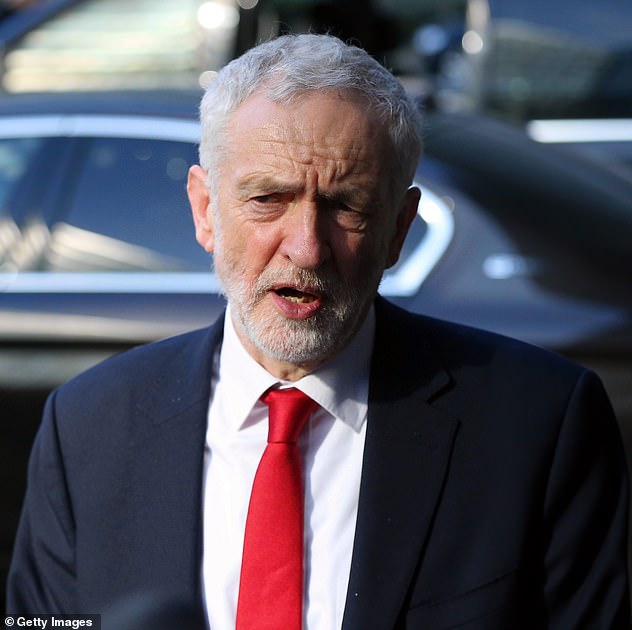 Jeremy Corbyn has also been warned that dozens of MPs, including shadow ministers, will threaten to join the new Independent Group in parliament or resign if he doesn’t back a second referendum

The Labour rebels are demanding Corybn supports an amendment by two of his backbench MPs that would put any deal Mrs May gets through to the public.

The proposal stipulates that if the public voted against the government’s deal, then the UK would be forced to scrap Brexit and remain in the EU.

One MP, who considered quitting the party this week, told The Times: ‘If Jeremy ends up not supporting it, it will have a dramatic effect and people will go.’

A senior Labour figure said that the plan, proposed by MPs Phil Wilson and Peter Kyle, was an ‘acid test’ of whether the Corbyn was sincere about not ruling out a second referendum.