May holds talks with Iranian president after Trump speech

Theresa May has held talks with the Iranian President just a day after the Donald Trump blasted the ‘murderous’ regime for exporting ‘violence, bloodshed and chaos’ in his fiery speech to the UN.

The Prime Minister sat down with Hassan Rouhani for discussions while at the UN in New York despite the regime’s rapidly worsening relations with the America.

Mr Trump tore into the Iranian regime during his explosive address to the UN General Assembly yesterday, threatening to tear up the nuclear deal struck between the two powers.

He branded the deal – which saw the Iranians agree to forfeit much of their ability to enrich uranium in return to an end to economic sanctions – an ’embarrassment’.

But the British government backs the deal, and British ministers are understood to have privately pressed the Trump administration to stick with it.

Theresa May and Iranian President Hassan Rouhani sat down for talks at the UN just a day after Donald Trump tore into the Islamic Republic, branding it a ‘murderous’ regime which exports terror

Mr Trump also blasted the Islamic Republic for backing terror group Hezbollah, which has stirred up sectarian violence in Iraq and Syria.

In a remarkably incendiary speech, he said: ‘The Iranian government masks a corrupt dictatorship behind the false guise of a democracy.

‘It has turned a wealthy country with a rich history and culture into an economically depleted rogue state whose chief exports are violence, bloodshed and chaos.

‘The longest suffering victims of Iran’s leaders are, in fact, its own people.

‘Rather than use its resources to improve Iranian lives, its oil profits go to fund Hezbollah and other terrorists that kill innocent Muslims and attack their peaceful Arab and Israeli neighbours.’ 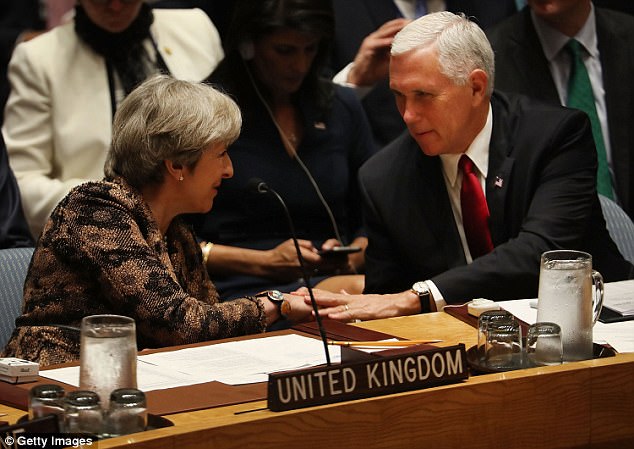 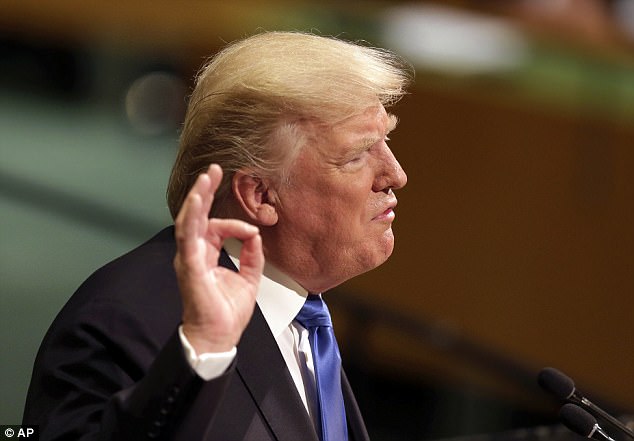 Donald Trump, pictured at the UN yesterday, launched a  furious attack on the Iranians during his fiery speech to the UN general Assembly

He tore into the regime for trying to ‘shore up Bashar al-Assad’s dictatorship’ in Syria and fuelling the civil war in Yemen.

He added: ‘We cannot let a murderous regime continue these destabilizing activities while building dangerous missiles.’

Mr Trump said the Iran nuclear deal ‘was one of the worst and most one-sided transactions the United States has ever entered into’ and suggested it should be scrapped.

But despite the astonishing attack from one of Britain’s closest allies, Mrs May went ahead with sit-down talks with the Iranian President in New York.

Yet despite her chat with the Iranians, Mrs May still appeared to have a very friendly relationship with Mr Trump’s White House.

As she sat down for talks at the UN headquarters, vice President Mike Pence reached out and touched Mrs May’s hand.

It comes after was famously photographed awkwardly holding Mr Trump’s house as she visited the president at the White House in January, soon after he was inaugurated.