May pledges to step up British military training for Nigerian troops

British forces are to step up training of Nigerian troops fighting Boko Haram extremists, it was revealed today.

Theresa May announced that military cooperation is being intensified as she visited the country on the second stop of her African tour.

Hardline Islamist group Boko Haram have causing havoc in west Africa for years, with the effects spreading to Europe.

The question of how to counter the threat was discussed by Mrs May and President Muhammadu Buhari in the capital Abuja this afternoon.

The leaders signed the first UK-Nigeria security and defence partnership.

More equipment and training will be provided to protect Nigerian soldiers from IEDs.

Boko Haram and Islamic State West Africa are said to be responsible for the deaths of over 20,000 people, with almost 2million still forced to live away from their homes in the north east of the country.

The agreement is designed to help stop this regional menace from spreading and posing a direct threat to the UK.

Under the new partnership, Britain will expand its provision of equipment and training on IEDs for the Nigerian military.

The UK has also offered to help Nigeria – for the first time – train full army units before they deploy to the North East. Currently, soldiers are trained individually rather than in their fighting teams.

The plan builds on the UK’s assistance in training more than 30,000 Nigerian troops since 2015. 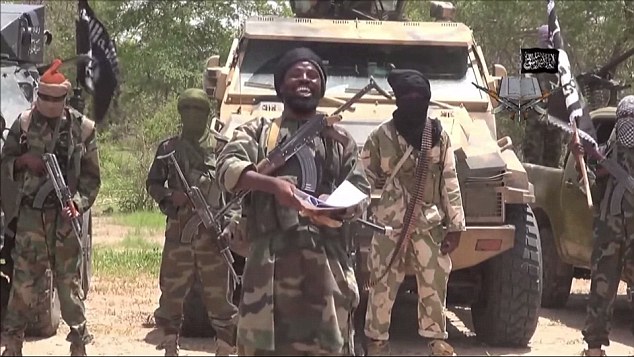 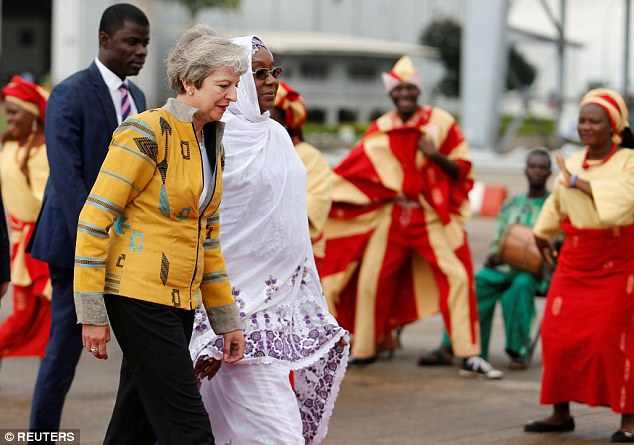 Mrs May said: ‘No-one should live in fear of being targeted by militants or forced from their homes, and no child should lose out on an education because of the threat of terror.

‘Insecurity, violence and extremism destabilise countries and regions and undermine growth – holding back entire generations from reaching their potential.

‘It is only when people are safe and communities stable that nations have the opportunity to thrive.

‘We are determined to work side by side with Nigeria to help them fight terrorism, reduce conflict, and lay the foundations for the future stability and prosperity that will benefit us all.’

Mrs May is heading to Lagos to meet survivors of modern slavery.

UK and French support to help Nigeria and Niger develop their borders to prevent trafficking, and counselling plus training to help 1,700 migrants and victims of modern slavery are among the pledges to be made.