Britain ‘does not and will not’ recognise Catalonia’s declaration of independence, the Prime Minister said today.

Spain stands on the brink of erupting into violence after the region voted to declare itself free from Spanish rule.

But the Spanish Parliament in Madrid responded by voting to reimpose direct rule on the region.

In a statement this afternoon, Mrs May’s official spokesperson made it clear that Britain will not endorse the Catalan vote.

The spokesperson said: ‘The UK does not and will not recognise the Unilateral Declaration of Independence made by the Catalan regional parliament.

Theresa May, pictured in parliament earlier this week, said Britain ‘does not and will not’ recognise Catalonia’s declaration of independence

‘It is based on a vote that was declared illegal by the Spanish courts.

‘We continue to want to see the rule of law upheld, the Spanish Constitution respected, and Spanish unity preserved.’

In Spain, Prime Minister Mariano Rajoy began a meeting with his cabinet at 5pm (BST) to discuss exactly how the national government will take control of the region.

He had told senators direct rule was needed to return ‘law, democracy and stability’ to Catalonia.

During that meeting, article 155 of the country’s constitution will be enacted – meaning the entire Catalan government will be dismissed and replaced by Spanish nominees.

The regional police force will come under national control and public broadcasters will start taking their orders from Madrid.

Spain will also take control of the pro-independence Catalan parliament, preventing it from adopting motions that ‘run counter’ to Madrid’s wishes. 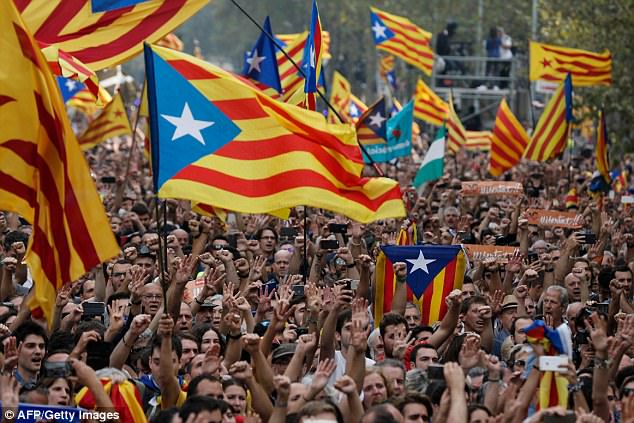 Spain’s top prosecutor has warned those responsible for the vote could face treason charges and up to 25 years in jail, with arrests planned for as early as Monday.

Mr Rajoy said yesterday he intends to call elections in the region within six months of taking control.

The Spanish senate voted to impose direct rule on the region just 40 minutes after the Catalan parliament backed independence.

But before the vote in Barcelona, opposition parties stormed out of parliament in protest – with pro-independence MPs draping their empty seats with Catalan flags.

Reacting to the crisis, President of the European Commission Jean-Claude Juncker warned of ‘more cracks’ emerging in the EU.

She said: ‘I congratulate the Catalan people on gaining their independence through peaceful and democratic means.

‘The Catalan people have insisted on a democratic route to achieving independence through the ballot box. 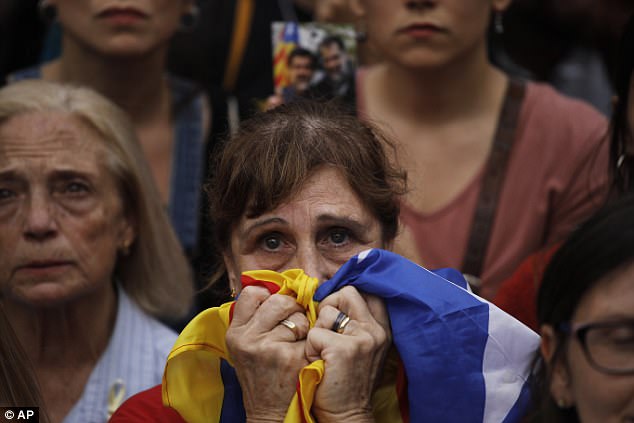 A woman is moved to tears following the historic vote for Catalan independence today. there are growing fears the country will spill over into violence as Madrid attempts to reimpose direct rule on the region

‘They are to be commended for continuing to reject violence  even though they have faced brutality form the Spanish state.

‘Plaid Cymru will be calling for the National Assembly of Wales to recognise the Catalan Republic as an independent country.’

And as British political leaders were split over how to respond to the historic vote, there are concerns Spain will spill over into violence.

Spain’s prosecution office said they will seek treason charges for those responsible for the vote.

That means President Carles Puigdemont and others could face up to 25 years in prison.

After the vote, Mr Puigdemont said: ‘Today our legitimate parliament, that came out of a democratic election, has taken a very important step. The legitimate representative of the citizens have followed the people’s mandate.

‘Now we are facing times when we will need to keep calm and peaceful and always keep dignity, as we’ve always done.

Pro-independence groups have vowed a campaign of civil disobedience to protect public buildings on the event of a crackdown by Madrid, which may involve the feared national riot police and even the army.

Thousands of Catalans gathered outside the parliament.