Theresa May today revealed she will not be watching the BBC’s hit drama Bodyguard.

The Prime Minister suggested the tense programme was too stressful as it mirrors her experience as a former Home Secretary.

The BBC show starring Keeley Hawes and deals with a senior politician’s struggle to respond to a deadly terror threat – as she begins a steamy affair with her close protection officer played by Richard Madden.

Hawes has indicated she drew inspiration for her character from real-life ministers, including researching Amber Rudd – was Home Secretary until resigning earlier this year.

Prior to that Mrs May had been in the high-pressure role since 2010.

Asked by journalists on her tour of Africa whether she would be tuning into the drama, Mrs May said: ‘I watch TV to unwind – I’m not sure a drama about a female Home Secretary is the best way for me to do that.’

It is understood that Mrs May watched part of the first episode before she decided it was not for her.

The PM has previously revealed that she is a fan of US crime drama NCIS.

By contrast, Ms Rudd has praised the Bodyguard and told of her experience living with round-the-clock security.

She has also joked that she wants a starring role in a planned second series – but as a ‘hardcore Bodyguard’ rather than a politician. 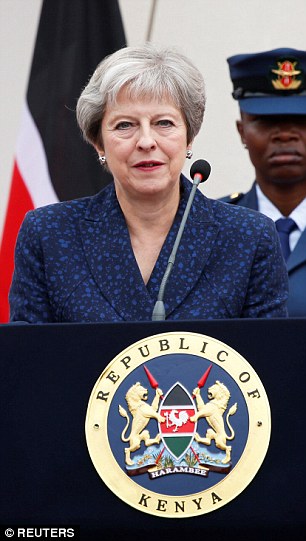 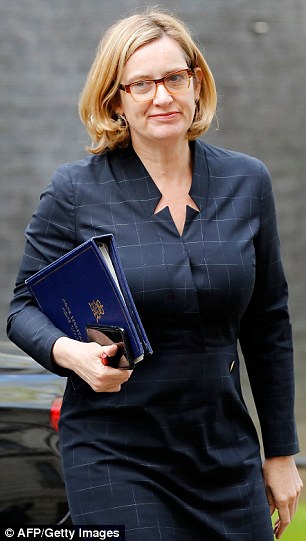 Theresa May (pictured on her Africa tour this week) has said she will not be watching the drama. But Amber Rudd (pictured right) has suggested that she wants to make an appearance in the second series

Speaking about her character Julia Montague earlier this week, Line of Duty star Hawes was asked if she prepared by looking at real-life politicians.

‘I very much did,’ she said. ‘Obviously at the time Amber Rudd was the Home Secretary, so we were aware that there might be those parallels that were going to be drawn.’

She added: ‘We’re very much not playing Amber Rudd. That wasn’t what we were going to do.

‘But, she’s a very good example. She was brilliant for me to research.’