She recently hit back at criticism for wearing racy outfits.

Yet Maya Jama did not look too bothered by her haters as she flashed a peace sign while stepping out in London, shortly after she looked radiant in a sizzling clip shared to Instagram on Wednesday.

The TV presenter, 26, displayed her washboard abs in a white crop top following her latest sizzling post in which she showed off her hourglass curves as she donned a crop top with printed boxers, holding the Ikea Off White phone cover in hand.

Woo! Maya Jama did not look too bothered by her haters as she flashed a peace sign while stepping out in London

During her London outing, Maya was stylish in her blue and white tracksuit.

Earlier on, she styled her brunette locks into loose waves, the former BBC radio host struck a series of playful poses for the camera. Going make-up free in the post, the Celebrity Juice star added to her look with baby blue nail polish.

It comes after Maya defended her penchant for wearing sexy clothing, after facing a barrage of criticism for her racy ensembles onscreen.

Maya has long enjoyed accentuating her curves in figure-hugging and barely-there outfits, but as her fame grew so, too, did the criticism. 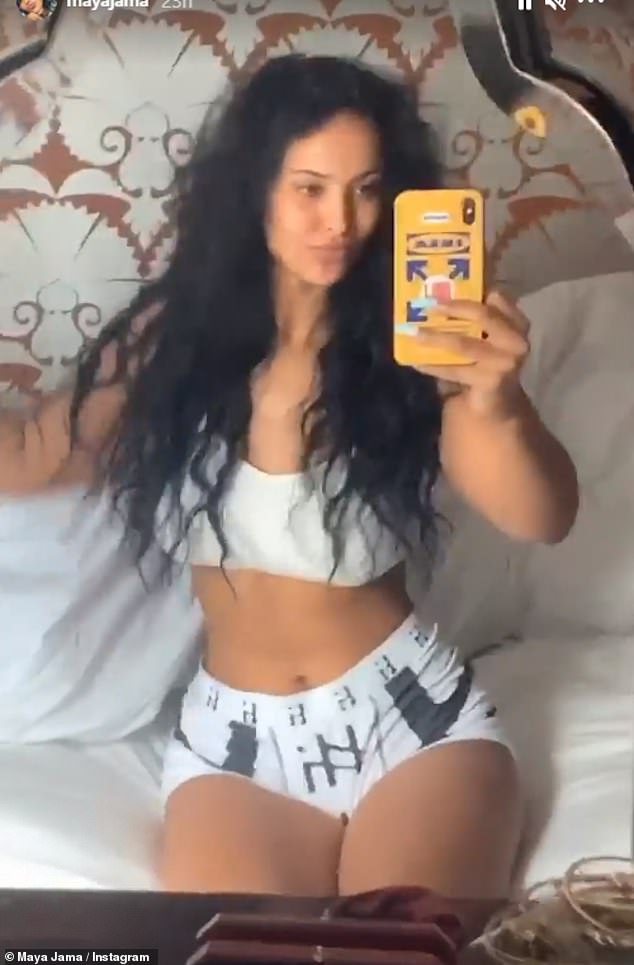 Wow! Earlier on, she looked radiant in a sizzling clip shared to Instagram on Wednesday 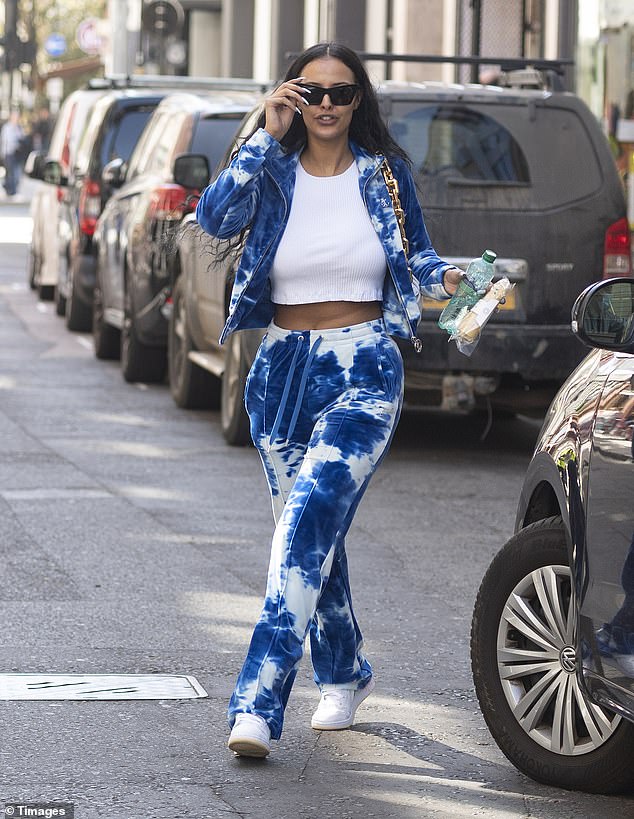 Out and about: She was grabbing lunch during her outing

Speaking about getting before going before cameras again as the new host of BBC Three make-up contest Glow Up, she told The Sun: ‘I can’t bl**dy wait. I’ve already planned my outfits for the first day of release like I’ve been in jail.’

She continued: ‘I’m going to wear what I want, as usual, and that’s how I’m going to stay. To be honest, I’ve always dressed this way. It only became a topic recently, so I’m just going to continue. And that’s that.’

Last year, Maya insisted she will dress how she wants ‘no matter what size I am’ as she hits back about the furore over her revealing outfits on BBC1 series Peter Crouch: Save Our Summer.

She accused critics, some of whom threatened to report her to the BBC, of ‘hyper sexualising’ her body rather than celebrating the fact a woman was fronting a primetime show during a Twitter riposte in June. 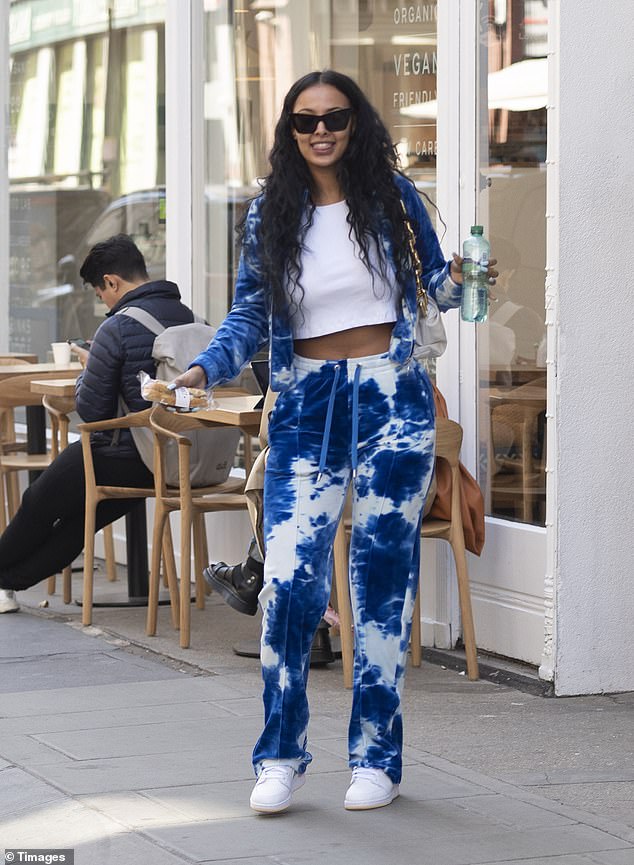 Tie-dye for! During her London outing, Maya was stylish in her blue and white tracksuit 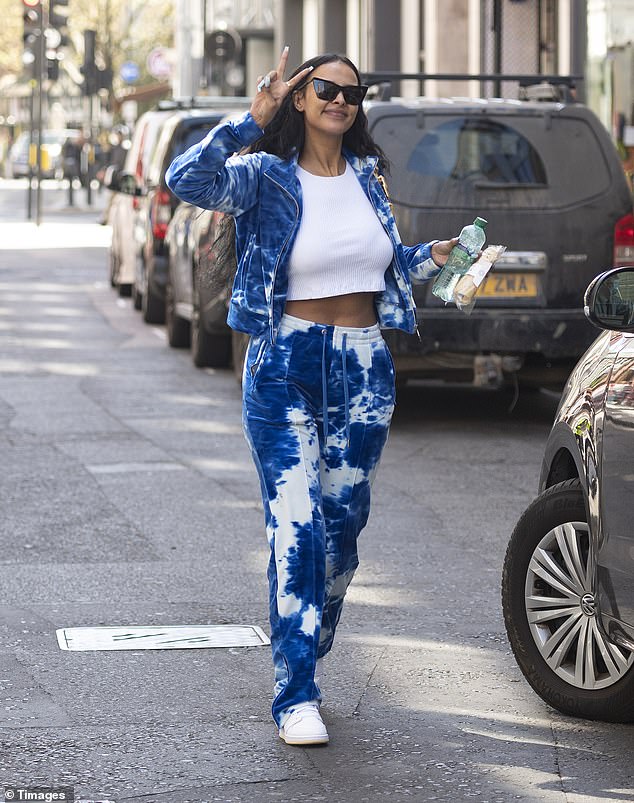 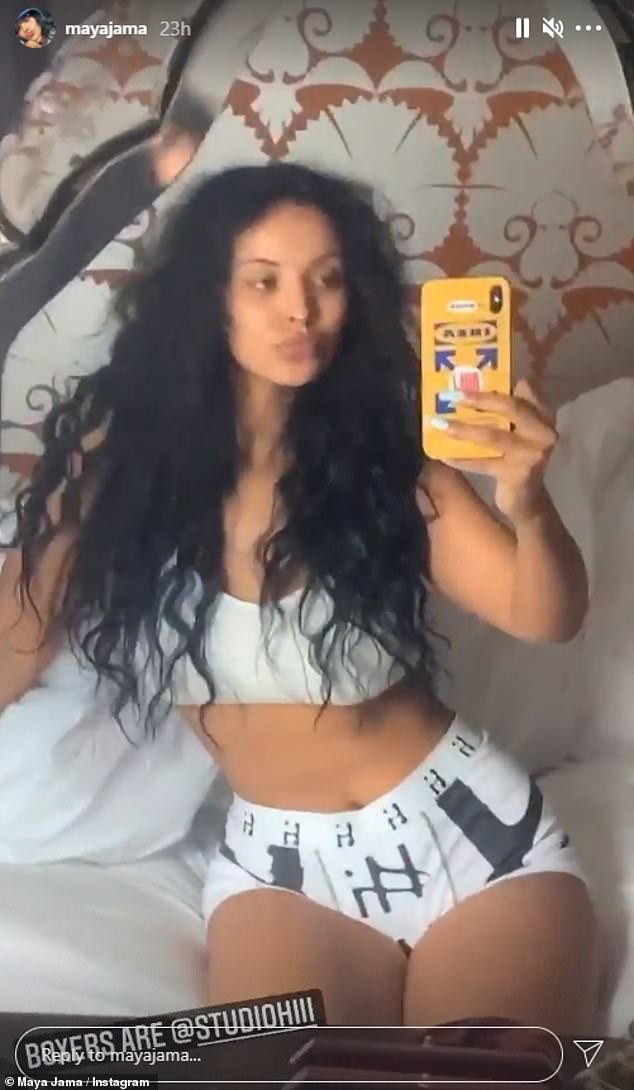 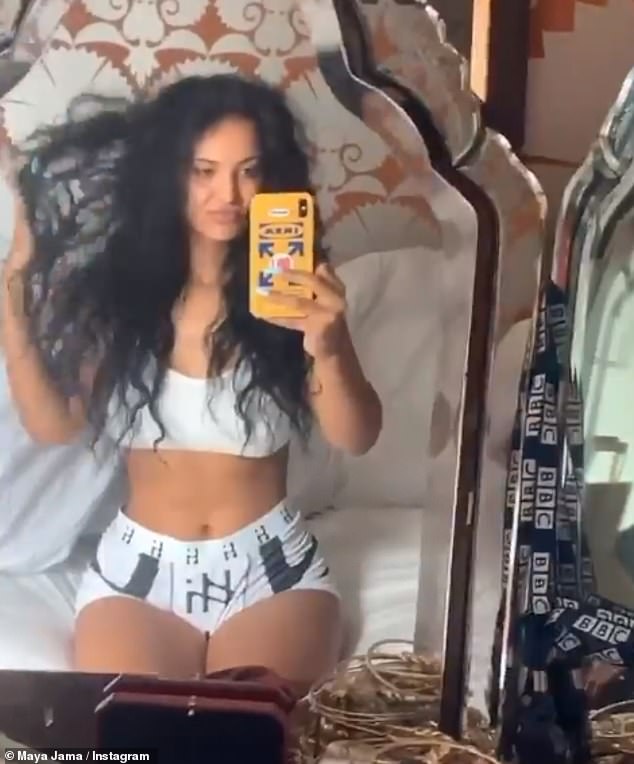 Wow: Styling her brunette locks into loose waves, the former BBC radio host struck a series of playful poses for the camera

Several months on, the former Radio One DJ still finds it ‘weird’ her revealing outfits caused such a stir – and made some people feel ‘awkward’.

In an exclusive interview with MailOnline, Maya said: ‘I’ve always worn the same thing but when I was slimmer nobody commented on it and as soon as you have got a fuller figure people are shocked and insulted by your body, so I found it ridiculous.

‘I’ve been wearing the same outfits, the same cut tops, my entire career and there was never really that many comments on it until I started putting on a bit of weight.

‘I was like “Gosh, if you’re shocked at boobs or even just a bit of cleavage on telly, I don’t know how people cope when they go to the swimming pool or the beach because there’s a lot more boobs on show there”.

‘It’s a woman’s body – I don’t feel like it should cause such outrage. I’m going to continue to dress how I’ve always dressed no matter what size I am.’ 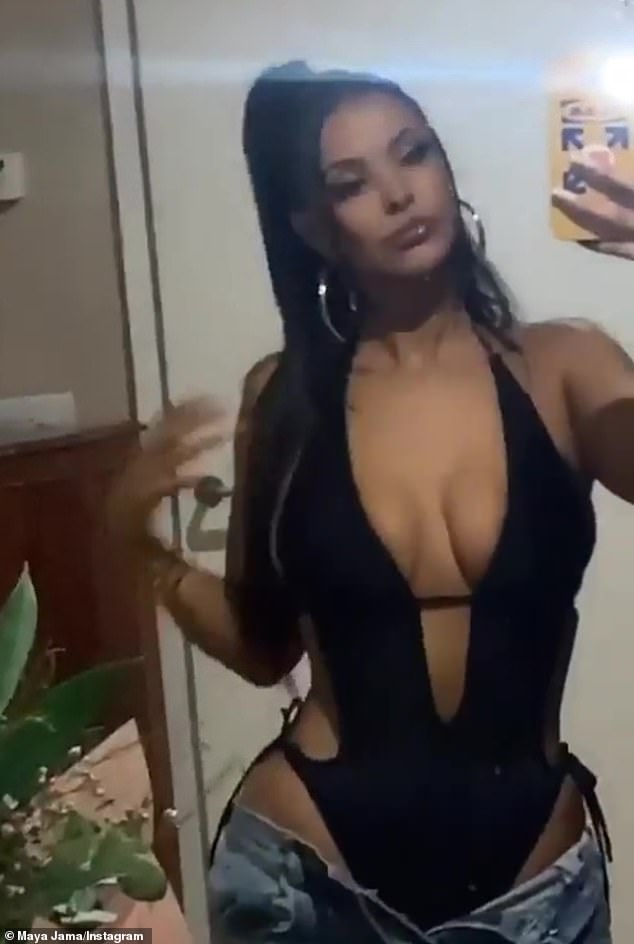 Standing up for herself:  Maya recently defended her penchant for wearing sexy clothing, after facing criticism for her racy ensembles onscreen