A 3,000-years-old Mayan temple has been discovered in Mexico, making it the ancient civilisation’s oldest and largest monument.

The temple site in Tabasco, Mexico, was discovered by archaeologists from the University of Arizona and an international team during an expedition in 2017.

The site, called Aquada Fénix, is 4,600ft long and up to 50ft high, making it larger than pyramids and other more recent buildings.

It was built between 800 BC and 1,000 BC, according to the team behind the discovery.

One of the most remarkable revelations from the find was the complete lack of stone sculptures related to rulers and elites, such as colossal heads and thrones, that are commonly seen in other Mayan temples.

This suggests that the people who built it were part of a more egalitarian society than those associated with later Mayan sites. 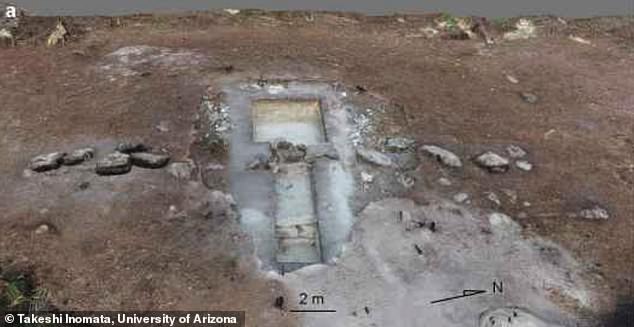 Researchers excavated parts of the massive site and were able to radiocarbon date charcoal and rocks to determine it was up to 3,000 years old

From the ground, it’s impossible to tell that the plateau where this site was discovered hides something extraordinary, the research team said.

However, from the sky, with laser eyes, and beneath the surface, with radiocarbon dating, it became clear just how historically important the location was.

Located in Tabasco, Mexico, near the northwestern border of Guatemala, the newly discovered site of Aguada Fénix lurked beneath the surface.

It had been hidden by its size and low profile until 2017 when Takeshi Inomata and Daniela Triadan from the University of Arizona made their remarkable discovery. 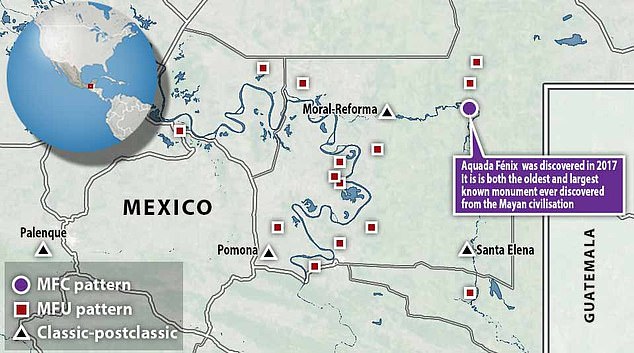 Located in Tabasco, Mexico, near the northwestern border of Guatemala, the newly discovered site of Aguada Fénix lurked beneath the surface

They used lidar – or light detection and ranging – technology, which uses laser-emitting equipment from an airplane to find the site under a tree canopy.

The team then excavated the site and radiocarbon-dated 69 samples of charcoal to determine that it was constructed sometime between 1,000 to 800 B.C.

Until now, the Maya site of Ceibal, built in 950 BC, was the oldest confirmed ceremonial centre dating back to the Mayan period in South America.

‘This area is developed – it’s not the jungle; people live there – but this site was not known because it is so flat and huge. It just looks like a natural landscape. But with lidar, it pops up as a very well-planned shape,’ the team said.

The discovery marks a time of major change in Mesoamerica and has several implications for what we know about the period, Inomata said.

Until now, it was thought that small Maya villages began to appear between 1,000 and 350 BC, what’s known as the Middle Preclassic period.

This coincided with the use of pottery and some maize cultivation.

Second, the site looks similar to the older Olmec civilisation centre of San Lorenzo to the west in the Mexican state of Veracruz – but without the statues dedicated to rulers and the elite found at the Olmec site. 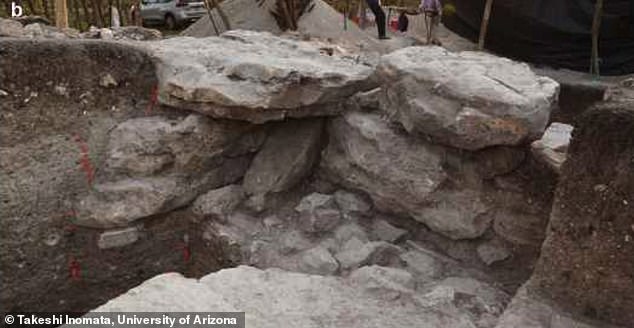 This suggests less social inequality than San Lorenzo and highlights the importance of communal work in the earliest days of the Maya.

‘There has always been debate over whether Olmec civilisation led to the development of the Maya civilisation or if the Maya developed independently,’ Inomata said. ‘So, our study focuses on a key area between the two.’

The period in which Aguada Fénix was constructed marked a gap in power – after the decline of San Lorenzo and before the rise of another Olmec center, La Venta.

During this time, there was an exchange of new ideas, such as construction and architectural styles, among various regions of southern Mesoamerica. 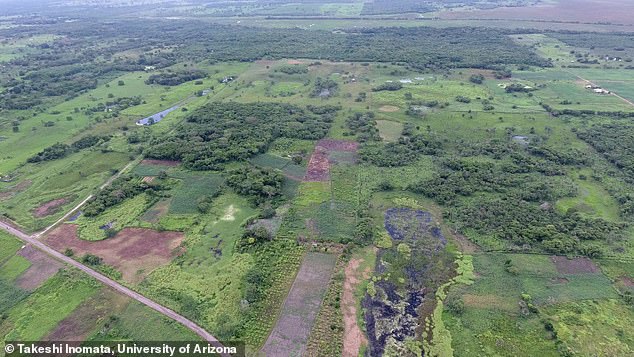 One of the most remarkable revelations from the find was the lack of monuments to the ‘elite’, suggesting it was part of a more equal society than other later Mayan sites

‘During later periods, there were powerful rulers and administrative systems in which the people were ordered to do the work,’ said Inomata.

‘But this site is much earlier, and we don’t see the evidence of the presence of powerful elites. We think that it’s more the result of communal work,’ he said.

The fact that monumental buildings existed earlier than thought and when Maya society had less social inequality makes archaeologists rethink the construction process those sites went through.

‘It’s not just hierarchical social organization with the elite that makes monuments like this possible,’ Inomata said. 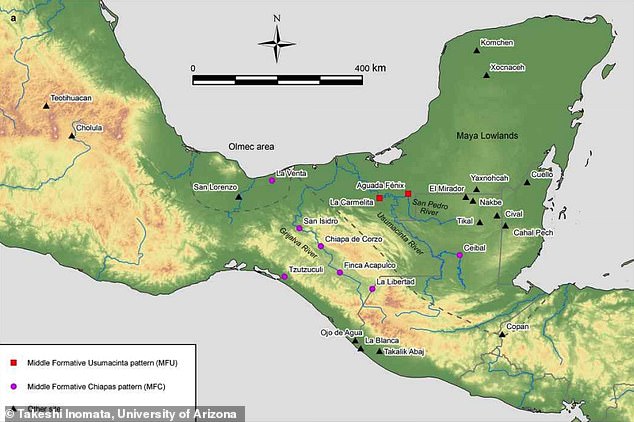 This is a map of Mesoamerica – the new site can be seen in the middle towards the top of the map.  The period in which Aguada Fénix was constructed marked a gap in power – after the decline of San Lorenzo and before the rise of another Olmec center, La Venta

‘This kind of understanding gives us important implications about human capability, and the potential of human groups.

‘You may not necessarily need a well-organized government to carry out these kinds of huge projects. People can work together to achieve amazing results.’

Inomata and his team will continue to work at Aguada Fénix and do a broader lidar analysis of the area to find out more about the ancient site.

They want to gather information about surrounding sites to understand how they interacted with the Olmec and the Maya.

They also wants to focus on the residential areas around Aguada Fénix.

‘We have substantial information about ceremonial construction,’ Inomata said, ‘but we want to see how people lived during this period and what kind of changes in lifestyle were happening around this time.’

The team’s findings have been published in the journal Nature

WHO WERE THE MAYANS? A POPULATION NOTED FOR ITS WRITTEN LANGUAGE, AGRICULTURAL AND CALENDARS