Mayor Bill de Blasio announced he would be closing streets in four boroughs across New York City on Thursday, allowing pedestrians and cyclist to have access to certain roadways to alleviate some of the issues people have had with social distancing in the city.

The mayor announced that two miles of street will be opened, adding to the seven miles of car-free streets that opened last weekend.

More than 9 miles have been designated as part of the Open Streets initiative designed to ‘provide greater social distancing among New Yorkers.’

More than 1.5 miles of those streets – located across three boroughs – will be managed by the Business Improvement Districts (DIT). Open Streets will resume on the 34th Avenue in Jackson Height, Queens.

Mayor Bill de Blasio announced on Wednesday that two miles of street will be closed to cars, adding to the seven miles designated last weekend 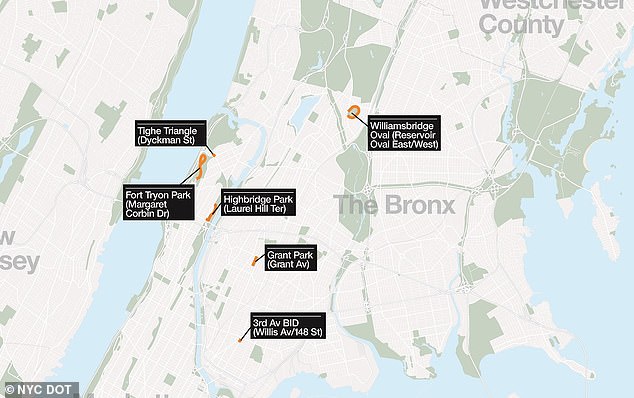 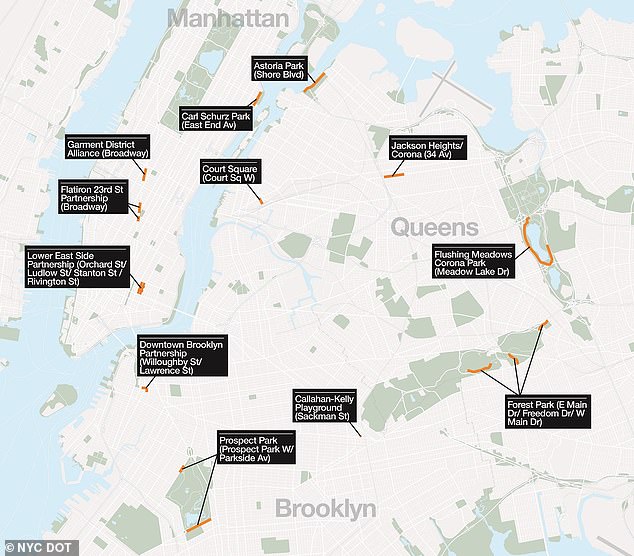 More than 1.5miles of those streets – located across three boroughs – will be managed by the Business Improvement Districts (DIT). Open Streets will resume on the 34th Avenue in Jackson Height, Queens 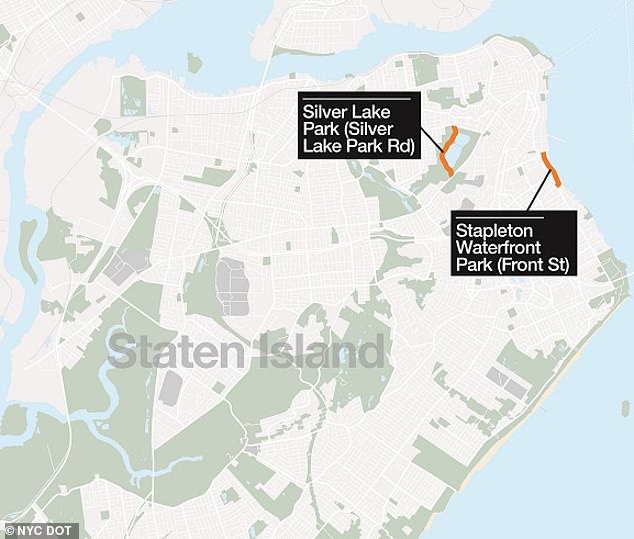 ‘As the weather gets warmer, New Yorkers will need options to safely enjoy the sunshine – and we’re excited to give them even more options to do so,’ Mayor de Blasio said in a press release.

‘We thank our partners at local BIDs, which play an essential role in making commercial areas safe places to social distance. We want New Yorkers to enjoy these streets and continue all best practices to stay safe from COVID-19.’

In the Bronx, areas include 3rd Ave BID, Grant Park and Williamsbridge. Brooklyn has the Downtown Brooklyn Partnership, Prospect Park and Callahan-Kelly Playground.

‘I applaud all of the BIDs who are stepping up in this crisis and working with the City on creating these Open Streets for New Yorkers to practice safe social distancing,’ said Deputy Mayor Laura Anglin. ‘Last weekend our City partners sprang into action with the first wave of these Open Streets and initial reports have been encouraging. As we continue to roll out additional Open Streets we need to New Yorkers to continue to be vigilant about social distancing and utilize these streets to do so.’

The Mayor and the Council announced that 40 miles across the city will reopen over the course of May.

Open Streets allows pedestrians and cyclist to use the roadbed of the street while no through traffic is allowed. Only local deliveries, city service, utility and emergency vehicles are permitted on the street but have to drive at five miles per hour.

More than 13,000 people have been confirmed to have died from COVID-19 in New York City

More than 171,000 people have tested positive for the virus in New York City

During his Wednesday press briefing, de Blasio sounded off on a potential crisis that could hit and cause for the furlough and layoff of municipal employees.

‘I’ve been talking to mayors all over the country,’ de Blasio said, according to the New York Daily News.

‘Republican and Democrat both, some of them already announced layoffs, some of them announced furloughs or are planning to. Every one of us has to start looking at that possibility if we don’t have any money.

‘We have a budget coming up in June. I’m not here to project anything while we’re in the middle of fighting for stimulus funding, because that’s what would get us out of this mess. That’s what New York City deserves,’ De Blasio said.

Even frontline workers could be at risk. 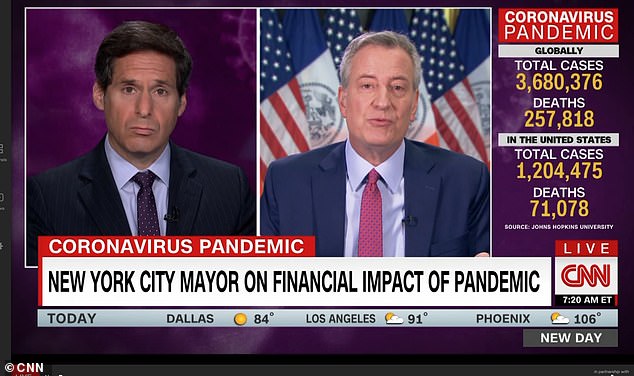 During his Wednesday press briefing, de Blasio sounded off on a potential crisis that could hit and cause for the furlough and layoff of municipal employees. He even expressed on CNN that frontline workers could be impacted

Freddi Goldstein, a City Hall spokeswoman, stressed that it was ‘too soon’ to get into the specifics about which agencies would not reopen.

De Blasio said Wednesday that 10 advisory councils on small business, the arts and culture, faith-based institutions and other sectors are being set up to help guide the city´s eventual reopening. The councils will have 20 to 40 members each and will be led by deputy mayors, he said.

The mayor cautioned that the city is a long way from being able to end restrictions intended to contain the virus, and he said the rest of the country should not reopen too quickly either.

‘Thank God things are getting better in New York City but we still have a long way to go,’ de Blasio said.

A City Hall spokeswoman, Freddi Goldstein, said it was “too soon” to get into the specifics of which agencies and positions would be first on the chopping block.