Those of us who were there will never forget watching a government in its death throes.

I was in the Commons press gallery on the night of March 28, 1979, when James Callaghan’s Labour government collapsed as it lost a no confidence vote called by Margaret Thatcher’s Tories.

Amid riotous scenes, thrilling history was being made.

Callaghan lost by one vote. I thought of these events 40 years ago as I watched last night’s vote. Callaghan, after presiding over the Winter of Discontent, was booted out and a decade of Thatcherism ushered in.

I was in the Commons press gallery on the night of March 28, 1979, when James Callaghan’s Labour government collapsed as it lost a no confidence vote called by Margaret Thatcher’s Tories (Margaret Thatcher sits at left while Prime Minister James Callaghan is engaged in conservation with Sir Harold Wilson, 1978)

Such nights of drama are very rare. A Commons defeat of more than 100 has happened to a government only three times since 1918.

Four months later, it was defeated again, twice – by 166 and 161 votes. This over a decision to drop criminal proceedings against the editor of the Communist newspaper Workers Weekly.

A few weeks afterwards, a general election was held following a motion of no confidence in the government. The Tories were victorious and Stanley Baldwin returned to power.

Last night’s vote was the culmination of another such day of high drama. Back in 1979, moments before the result was announced, a Labour whip walked towards the Speaker’s chair.

His tally of votes were in his hand and he raised his arm aloft to fellow Labour MPs who leapt to the air in jubilation in the belief that they had won.

Confusingly, seconds later, the Tory whips entered the chamber and did likewise to their own side, to yelps of Conservative joy. 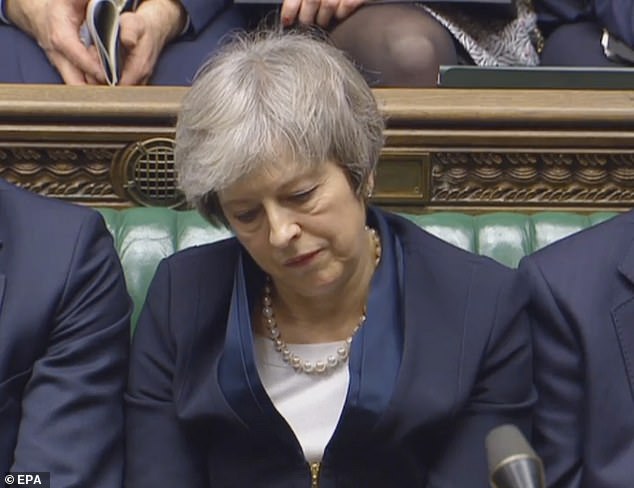 Last night’s defeat for Mrs May will have a profound effect on Britain’s political landscape, too, writes SIMON WALTERS

The Iron Lady changed Britain for ever and consigned Labour into the wilderness for 18 years.

Last night’s defeat for Mrs May will have a profound effect on Britain’s political landscape, too.

It is no exaggeration to say that either a no deal or no Brexit, would have a greater impact on our way of life than that effected by the Thatcher revolution.

No deal could, in the short term at least, result in similar chaos to that seen during the 1978-79 Winter of Discontent. If Brexit doesn’t happen, there could be widespread civil unrest because those who voted Leave would feel betrayed.

Despite last night’s humiliation, the Government hasn’t fallen. But for those of us who witnessed that March night 40 years ago, the feeling is that we are experiencing another epochal moment.