PC Sharon Houfe, a community cohesion officer for Humberside Police, forged strong relationships with minority groups in Hull and played a central role in tackling hate crime. She is seen in an undated photo

A police officer who got an MBE for her work with LGBT groups was seen four times by mental health medics before she killed herself, an inquest heard yesterday.

The hugely popular officer’s tireless work was recognised in the 2014 New Year’s honours list with the award of an MBE.

However, she was hampered by underlying health problems, including fibromyalgia, which led her to being off work for a few months.

Her mental health began to deteriorate in the weeks before she was found hanged on April 29, 2016.

An inquest is being held into her death, which began on Monday.

On Tuesday, the court heard how there were potentially several opportunities to carry out a Mental Health Act assessment to determine whether she should have been sectioned.

She said: ‘I contacted the crisis team as I was concerned with her behaviour towards the end of the assessment after mentioning she might kill herself that night.

‘But they told me there was no basis for any home-based treatment and that counselling would be the best way forward.’

Richard Baker, representing PC Houfe’s family, asked Ms Copeland whether she was concerned by the amount of planning PC Houfe had thought about over her taking her own life. 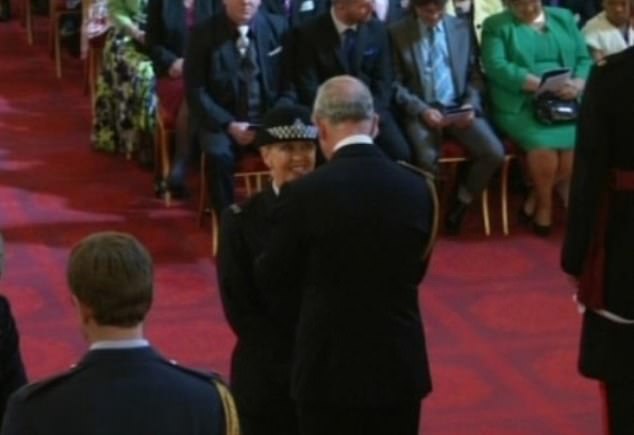 Ms Copeland said: ‘She talked about electrocuting herself but she never discussed how she would do it and she said she would not act on it.

‘She talked about her bad haircut, having had £600 extensions put in, which was affecting her self-esteem but the issues were wider than this.

‘She was suffering from fibromyalgia and had family issues which were triggers.’

Senior coroner professor Paul Marks put it to Ms Copeland that the fact PC Houfe was a serving police officer, who had talked about electrocuting herself and had fixated on something inconsequential regarding her hair, made her a special case with a number of red flags.

But Ms Copeland said: ‘I feel the decision I made at that point was right and I feel the verbal assessment was adequate. However, I accept the documentation could have been improved.’

PC Houfe was referred to the trust once more on the Monday by PC Houfe’s GP for assessment.

Mental health nurse Christopher Hogg spoke to PC Houfe on the phone for 40 minutes that evening and admits he had grave concerns for her welfare.

He said: ‘While speaking to her I thought she was risky and acutely ill. It felt to me the severity of her symptoms had not been getting through to other people she had seen.

‘She felt she had been over egging her symptoms when, in fact, I think she was under egging them. She was berating herself.

‘She talked about jumping off the Humber Bridge. It was the way she said things rather than what she said.

‘She talked about wanting to go to hospital and be sectioned but then she would feel ashamed, saying she would normally be assisting others in this situation rather than be in it herself.

‘The issues over her hair were a sign of her mental health disorder rather than a cause.’

Despite his deep concerns, Mr Hogg said a Mental Health Act assessment still was not required, but rather an urgent referral which could be within five days.

He was unable to find a suitable staff member for the following day and organised for a practice development nurse, Mark Fratson, to undertake the assessment. 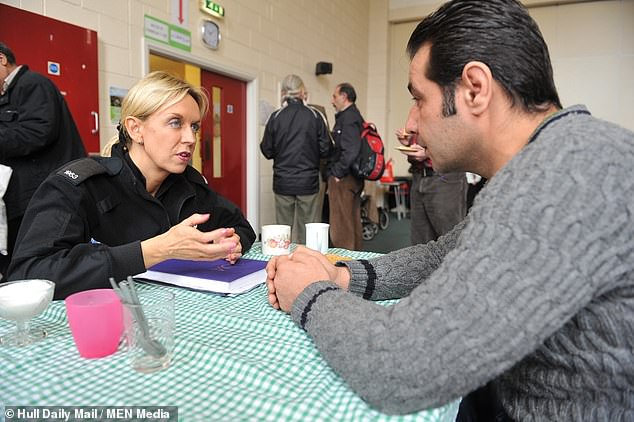 The inquest into PC Houfe’s death began on Monday. She is seen in this undated photo speaking with a member of the public at a community event

This was despite the fact the nurse was only shadowing the team at Miranda House while undergoing a ‘return to work and competency’ assessment having been off work long-term.

Mr Hogg said: ‘There had been some issues with Mr Fratson’s performance and he had been off with ill health. He was placed with us to shadow what we did.

‘I struggled to find a suitable person to carry out the assessment and I felt it needed to be carried out as quickly as possible. Mr Fratson was the least worst option.

‘I understand he did not complete a full assessment and believed it was not required. He felt I was unaware there has already been an assessment on the Saturday.

‘While [he] was capable of carrying out assessments on his own, with hindsight, I would not have referred Sharon to him.’

The day before the assessment carried out by Mr Fratson, paramedics took PC Houfe to A&E by ambulance, after she suffered a panic attack.

This time she was assessed by specialist liaison practitioner, Rebecca Mason, and another colleague.

Again, no consultant psychiatrist was brought in to carry out a Mental Health Act assessment despite reports she had demanded to be sectioned.

Ms Mason said: ‘A full mental health assessment was not performed. Sharon seemed keen to attend her appointment the next day and she seemed confident in answering our questions.

‘She talked about her bad haircut and the embarrassment of someone in her profession being in such a position.

‘She did express suicidal thoughts but said she would not act upon it because of her family and the fact her father was ill and she wanted to be there for him.’ 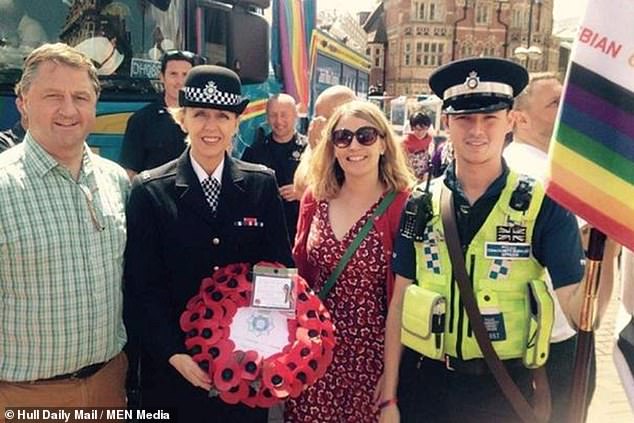 PC Houfe was accessed by mental health nurses four times before she killed herself, the inquest heard. She is pictured in this undated photo at an event with the LGBT community

Ms Mason said: ‘In hindsight, there were some alarm bells but her presentation did not make me believe we had to act on anything at that point.

‘If I had all the information I now know then maybe we would have carried out a full assessment.

‘But she showed good mental capacity and she seemed keen to attend the appointment the next day.

‘She wanted a community psychiatric nurse to visit her at home daily but I explained this service was not possible and explained what was available to her.’

Hundreds attended PC Houfe’s funeral at Chanterlands Crematorium and she was given a police guard of honour.