John McCain called on America to fight conspiracy theories and isolationism in a Trump-baiting speech to the US Naval Academy on Monday.

‘We have to fight against propaganda and crackpot conspiracy theories,’ McCain told the Brigade of Midshipmen. ‘We have to fight isolationism, protectionism, and nativism. We have to defeat those who would worsen our divisions.’

He added that ‘we have to remind our sons and daughters that we became the most powerful nation on earth by tearing down walls, not building them,’ The Hill reported.

John McCain warned against conspiracy theories and echo chambers of opinion in a speech to the Brigade of Midshipmen on Monday. He also warned against isolationism and nativism

McCain, 81, told the Annapolis, Maryland academy – which is also his alma mater – that ‘We are asleep to the necessity of our leadership, and to the opportunities and real dangers of this world.

‘We are asleep in our echo chambers, where our views are always affirmed and information that contradicts them is always fake.’

He didn’t name Trump directly, but did invoke his ‘America First’ phrase, saying it ultimately led to the Second World War

‘Our failure to remain engaged in Europe and enforce the hard-won peace of 1918 had made that clear,’ he said.

‘There could be no more isolationism, no more tired resignation – no more “America First.”‘

McCain, a six-term Arizona senator and former Navy pilot who is now battling brain cancer, described himself as an ‘undistinguished member of the class of 1958’ who now stands as the ‘luckiest guy you’ll ever know.’ 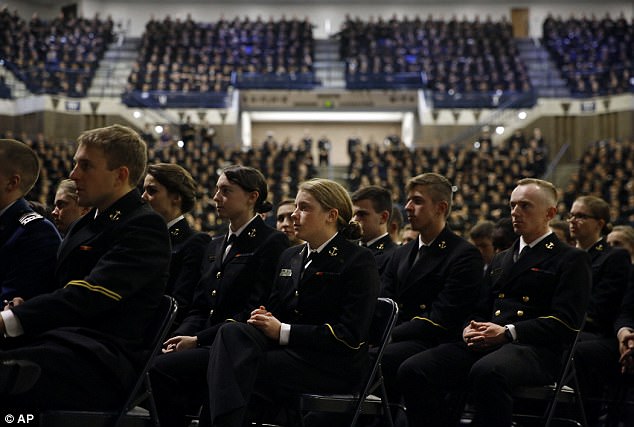 McCain told the crowd that an isolationist ‘America first’ attitude had allowed the rise of Hitler – referencing Trump’s use of the phrase. He also advised against building walls

McCain described his regret from the 2000 presidential campaign, when he yielded to polling data and said the people of South Carolina should decide whether the Confederate flag should fly over their state.

His message to the midshipmen: ‘Do the right thing, thanks or no thanks.’

Questioned about the Russia probe, McCain, the chairman of the Senate Armed Services Committee, said he had not seen evidence that the meddling by Moscow affected the outcome of the presidential election.

He added, however, that he has seen these scandals before and ‘every day, another shoe drops.’

The senator shrugged off the criticism, saying he had faced tougher adversaries. The GOP senator stunned the White House this past summer when he was the decisive vote against a Republican plan to dismantle Barack Obama’s Affordable Care Act.

Given a chance Monday night to answer additional questions, McCain joked, ‘as many questions as you want, since we’re not doing anything in the Senate.’

McCain underwent surgery in mid-July to remove a 2-inch (51-millimeter) blood clot in his brain after being diagnosed with an aggressive tumor called a glioblastoma. 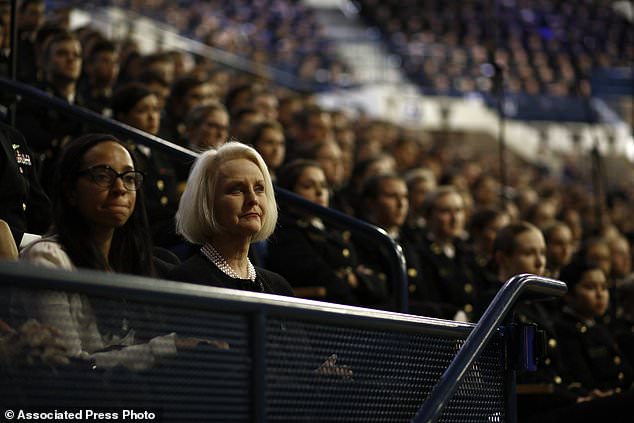 Cindy McCain, second from right, is seen in the crowd during the speech. McCain called himself an ‘undistinguished’ Naval graduate and the luckiest man in the room