Senator John McCain appears in an upcoming documentary filmed before his death warning the United States about president Donald Trump and his ties to Russia.

The documentary debuts in theaters on August 31, less than a week after McCain died from brain cancer.

‘The fact that there was an attack on the fundamental—the absolute fundamental—a free and fair election, should alarm all of us,’ McCain says in a clip obtained by The Daily Beast.

Senator John McCain  warns about president Donald Trump and Russia in an upcoming documentary called Active Measures. The film will be released on August 31, nearly a week after McCain (pictured) died from brain cancer

McCain is referring to numerous reports alleging that the Russian government meddled in the 2016 election, something Putin denies. Special counsel Robert Mueller has spent the past few months investigating the alleged collusion.

Isikoff appears in the film saying that possible Russian involvement ‘spooked officials in the White House’.

‘And that’s the moment, I think, that the enormity of the Russian influence campaign really started to hit home,’ he added.

Clinton added: ‘People were seeing this dangerous, troubling activity coming from the Russians that was actually in our electoral system.’

During the two-hour documentary, Bryan argues that Russia has been cultivating Trump long before he was a presidential candidate. Rhode Island senator Sheldon Whitehouse explains that the Russians ‘have a particular type of mark who they go after’ and Trump fits the bill.

‘They go after someone who has business resources, perhaps some shady morals so they are amenable to bribery. Or perhaps they’re in a difficult financial situation or has either political connections or aspirations,’ he said, adding: ‘I’ve just described Donald Trump.’ 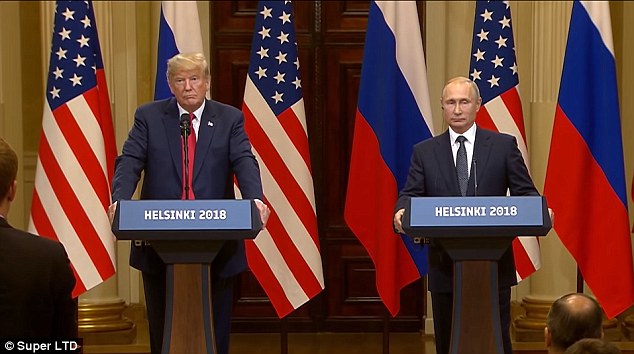 ‘It should alarm us all,’ McCain says of possible Russia collusion. Putin, pictured with Trump during their meeting in Helsinki, denied the allegations

Bryan also lays out multiple connections between the president and Putin allies. At one point in the film, McCain says Putin ‘has no moral standards’ and ‘poses a threat to the world’.

Bryan said he wanted to include McCain in his documentary because of how vocal the senator was about alleged Russian meddling and the president’s seemingly close bond with Putin.

‘(McCain) was the most forceful voice in Congress at speaking out against Russian aggression and standing up for democracy worldwide,’ Bryan told the Daily Beast.

‘In 2004 when Putin tried to rig an election in Ukraine, John McCain stood with the Ukrainian people. In 2016 when Putin tried to do the same thing in America, he was one of the few voices in his party who refused to remain silent,’ Bryan added. ‘He and Hillary Clinton were Vladimir Putin’s greatest adversaries in the United States, and without their voices it would be impossible to understand how and why our country arrived at this point.’