McDonald’s is celebrating the 50th anniversary of its beloved Egg McMuffin by offering it for just 63¢ — the same price it was sold at when it debuted in 1971.

Customers can order their bargain breakfast exclusively on the McDonald’s app on Thursday, November 18 from 6 am to 10:30 am.

And to further give the Egg McMuffin its due in the spotlight, McDonald’s has also shared some fan-favorite menu hacks for upgrading the breakfast sandwich with add-ons like has browns, a McChicken patty, and sauces like syrup and jelly.

McDonald’s will sell Egg McMuffins for just 63¢ exclusively on the McDonald’s app on Thursday, November 18 from 6 am to 10:30 am 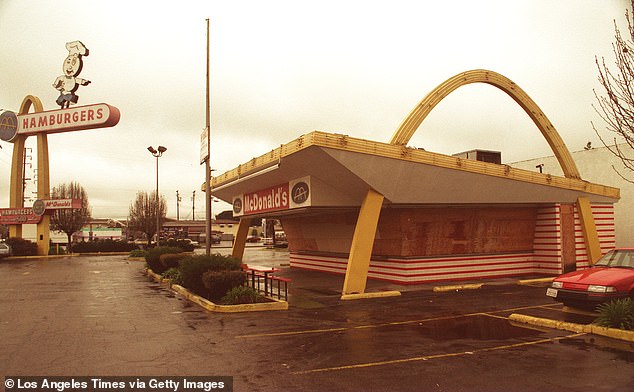 That was the price that it sold out when it debuted in a single store in California in 1971, before it was rolled out nationally over the next few years (pictured: one of the original McDonald’s)

The Egg McMuffin made its debut at a single McDonald’s location in Santa Barbara, California 1972, the brainchild of franchise owner Herb Peterson.

It would soon be rolled out nationally after the company’s owner Ray Kroc, paid the Santa Barbara location a visit — and tried the breakfast sandwich despite his skepticism.

According to McDonald’s, fans have found ways to customize the Egg McMuffin over the years, and now they’re sharing some of the best ‘hacks’ to try.

‘The Egg McMuffin, the first-ever quick service restaurant breakfast sandwich, joined the McDonald’s menu in 1971 in Santa Barbara, California, and customers have been getting creative with it ever since,’ said Molly McKenna, McDonald’s Senior Director of Brand Communications,’ said in a press release. 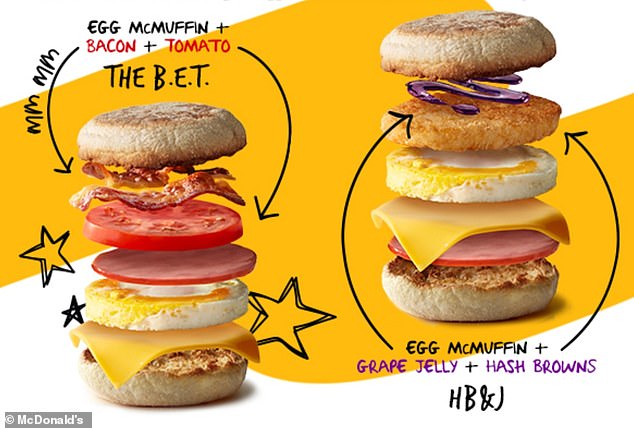 The chain has also shared several ‘hacks’ for upgrading the sandwich, like adding hash browns, bacon, tomato, and sauces 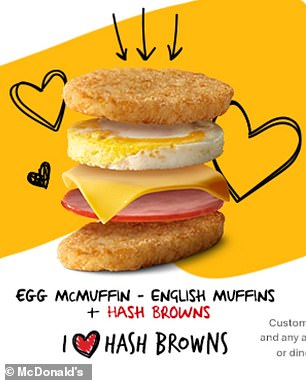 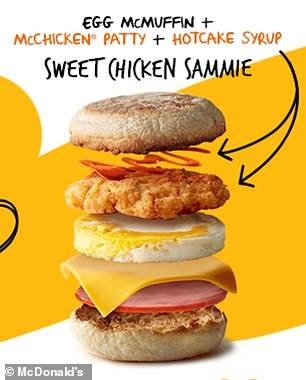 Customers can do away with the English muffins and add two hash browns (left), while adding a McChicken patty and hot sauce makes a ‘Sweet Chicken Sammie’ (right)

‘It‘s been fun to see all the ways they’ve made it their own — whether it’s adding some heat with salsa or sweetness with jam or combining it with the Sausage McMuffin, they’re always innovating. I personally love to add a little heat to my Egg McMuffin.’

The ‘hack’ recipes include adding bacon and tomato to create the ‘B.E.T,’ or bacon, egg, and tomato McMuffin.

Or customers can do away with the English muffins altogether and sandwich the egg, Canadian bacon, and cheese between two hash browns. 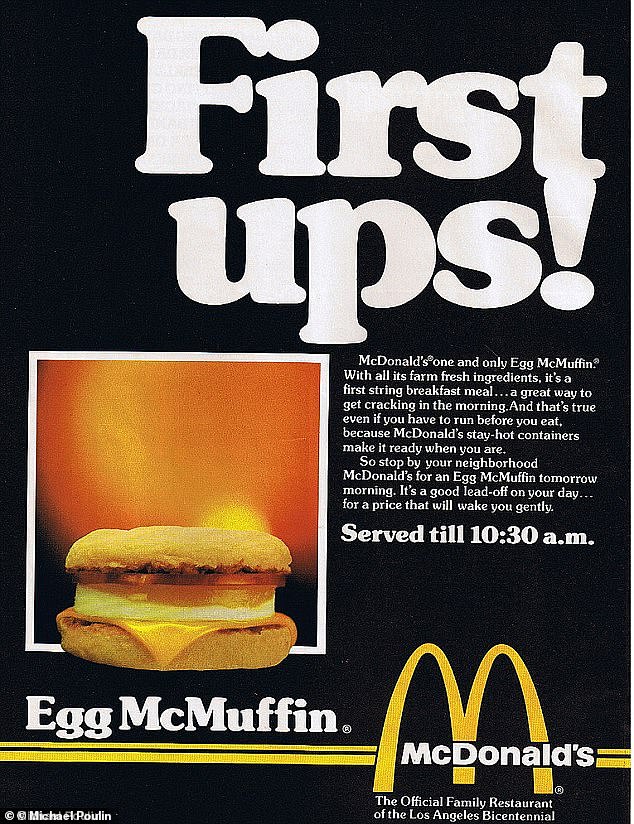 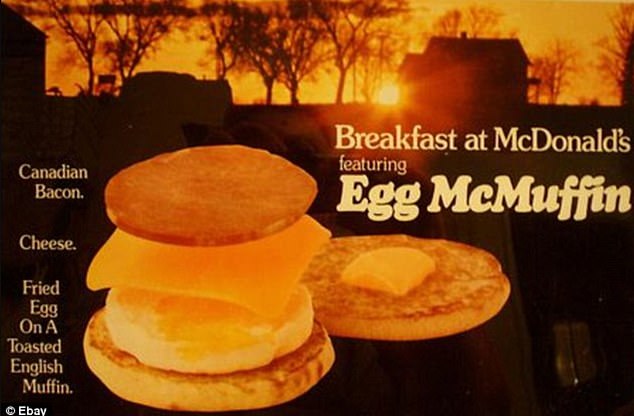 When Ray Kroc, then the company’s owner, visited in 1972, Peterson made him try the sandwich – and he loved it, rolling it out nationwide

The Egg McMuffin is certainly one of the chain’s more popular orderings, with breakfast sales making up about a quarter of their overall sales — and its addition to the menu almost didn’t happen.

Peterson, the Southern California franchise owner, wanted a reason to open his restaurant before noon.

He liked eggs Benedict and wanted to make something similar, but found Hollandaise sauce to be too messy — and realized that pre-packaged sauce didn’t ‘do the trick.’

Instead, he swapped it out for cheese and butter. He also developed Teflon rings to shape the eggs into circles as they cooked, debuting the sandwich in his store in 1971.

But Peterson was just a franchise owner — and he had to get Kroc, then owner of the whole company, to see what a great idea it was. 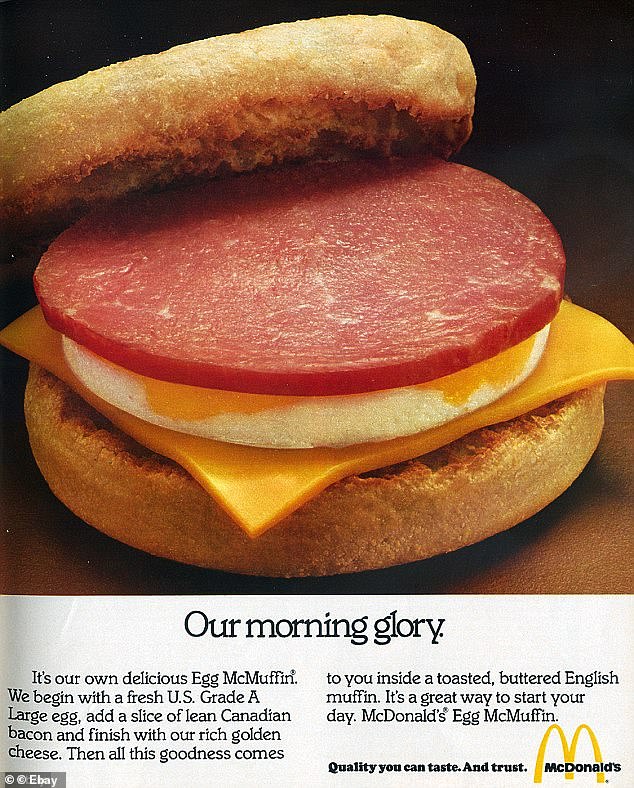 That name was dreamt up by Patty Turner, the wife of a McDonald’s executive

Kroc revealed how he got on board in his autobiography, Grinding it Out: The Making of McDonald’s. 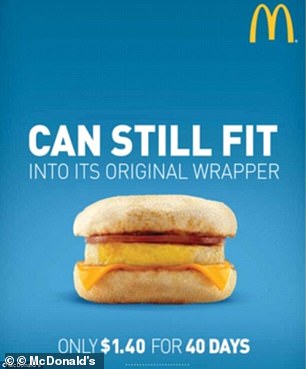 At the time, fast food restaurants weren’t really offering breakfast, so the McMuffin changed the business

Peterson, the Southern California franchise owner, had been selling breakfast sandwiches at his store since 1971. In 1972, Kroc paid him a visit — and Peterson insisted that he look at something without saying what it was.

‘He didn’t want me to reject it out of hand, which I might have done, because it was a crazy idea — a breakfast sandwich,’ he wrote, according to Time.

‘It consisted of an egg that had been formed in a Teflon circle, with the yolk broken, and was dressed with a slice of cheese and a slice of grilled Canadian bacon. This was served open-faced on a toasted and buttered English muffin. I boggled a bit at the presentation. But then I tasted it, and I was sold. Wow!’

At that point, it wasn’t yet called an Egg McMuffin — that name was dreamt up by Patty Turner, the wife of a McDonald’s executive. 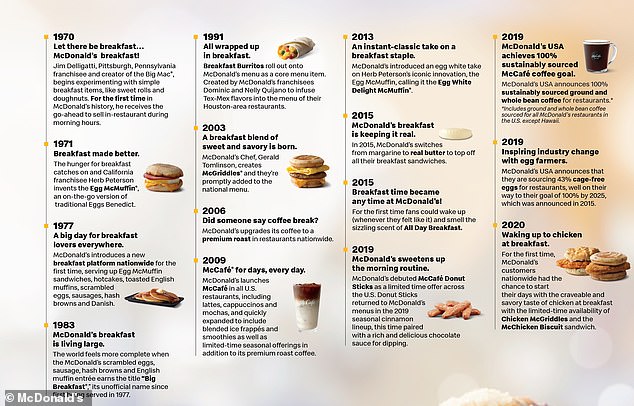 The Egg McMuffin began in test markets that same year, and over the next three years, the company worked to get them into all McDonald’s locations at the low, low price of 63¢.

At the time, fast food restaurants weren’t really offering breakfast, so the McMuffin changed the business.

‘The Egg McMuffin was introduced at a time when going to a fast food restaurant for breakfast was a new thing,’ Professor Jordan LeBel, who teaches food marketing at Montreal’s Concordia University, told Ad Week.