While there are loads of Yelp reviews on just about everything some of the funniest and most outrageous comments are the ones rating different chains of McDonald’s.

The reviews from different customers across the U.S. aren’t just about the food as people also touch base on everything from the crowd to the decor and a few diners even wrote their reviews in the form of poems.

Yelp reviews: While there are loads of Yelp reviews on just about everything some of the funniest and most outrageous comments are the ones rating different chains of McDonald’s

Haiku: In one hilarious comment a man gave a one-star review of an NYC location and wrote his evaluation in the form of a poem 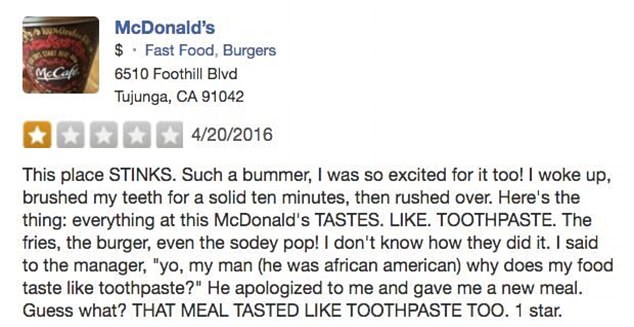 Banned from Yelp: Chris Stephens, a serial Yelp reviewer, was actually kicked off the site because of this review of a Tujunga, California chain

Food poisoning: Nathan got sick from one of the NYC chains and couldn’t stop vomiting after eating the food 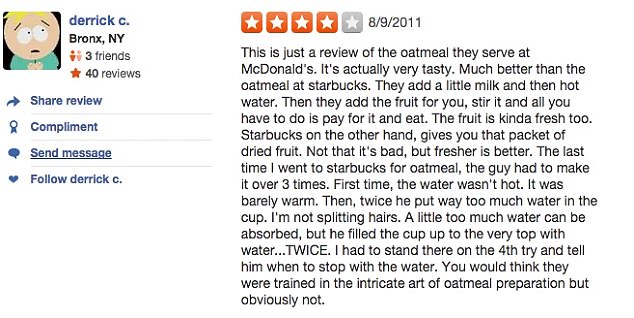 Too much water: This guy gave a detailed review about the oatmeal having too much water in it

Star Wars: One user got a little carried away and reviewed a Houston McDonald’s as if it was the Millennium Falcon from Star Wars

Music choices: This guy only gave McD’s three stars because they played Sir Mix A Lot’s song I Like Big Butts while he waited for a burger

In one hilarious comment a man gave a one-star review of a New York City location and wrote his evaluation in the form of a poem.

‘Haiku: Swore I’d stop going I eat away my sorrows Don’t f***ing go here. To eat or not to eat? Quote the raven nevermore!’ he wrote.

Chris Stephens gave a review of a Tujunga, California chain saying, ‘This place STINKS. Such a bummer, I was so excited for it too! I woke up, brushed my teeth for a solid ten minutes, then rushed over,’ Chris wrote.

‘Here’s the thing: everything at this McDonald’s TASTES. LIKE. TOOTHPASTE. The fries, the burger, even the sodey pop! I don’t know how they did it.

‘I said to the manager, “yo, my man… why does my food taste like toothpaste?” He apologized to me and gave me a new meal.

‘Guess what? THAT MEAL TASTED LIKE TOOTHPASTE TOO. One star,’ he concluded his rant which ultimately got him kicked off Yelp.

After posting bizarre reviews about different fast food restaurants such as McD’s, Olive Garden and Jamba Juice – Yelp shut down his account because his comments made no sense and were not relevant to the restaurants at all.

One instance involved an ice cream shortage and an unhappy customer wrote, ‘How you gonna call yourself a McD’s if you aint got no ice cream?

‘Don’t you know I’m a mad moody emotional woman with effed up ovaries who needs me a McFlurry? Why you gotta go and do this to me?’

‘Thank you for helping me maintain my weight,’ a sarcastic customer commented.

Meanwhile another customer had a bad experience when a McD’s employee gave their meal to someone else.

‘They gave my nuggets to somebody else and I am very offended because I am unearthly beautiful and could not be confused with any mortal,’ he wrote.

Entertaining crowd: One woman commented on the bizarre crowd at her McDonald’s and how she had to educate ‘homeless drunks’ about transsexuals

Catchy song: Jenny wrote out all of the words to nursery rhyme Old MacDonald Had a Farm before saying she likes the new McD’s phone app 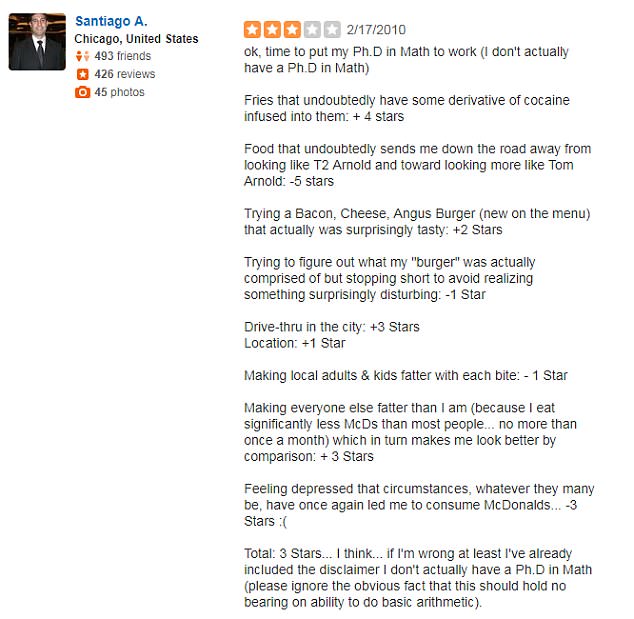 Ph.D lesson: In yet another extremely long rant, one guy joked that he had a Ph.D in Math before rating different situations individually

Not helping: One sarcastic reviewer thanked McDonald’s for helping them remain their size and not lose weight

In a quite detailed assessment someone broke down their experience saying, ‘On the monthly occasion I feel like taking out life’s pain and suffering on my own body I head here for delicious, disgustingly bad for me food.

‘I want it to taste like McDonald’s food. A McDonald’s hamburger is not a ‘hamburger’ just as McDonald’s McNuggets are not ‘chicken fingers.’ When you come to McDonald’s you’re here for their hamburger and nuggets.

‘That said, they also have an amazing dollar value menu and only $5 for 20 f’ing McNuggets. TWENTY. MCNUGGETS. $5.

‘I have to throw out eight of them or keep them for the next day to avoid eating them all by myself. I like the hot mustard sauce myself,’ he continued.

He concluded his long rant saying, ‘Finally a good trick which they’re supposed to charge 25 cents for but don’t is to get two double cheeseburgers for $1.29 each and then ask for Big Mac sauce on them and you get more food for less money. Four stars!’

In yet another extremely long rant, one guy joked, ‘Ok, time to put my Ph.D in Math to work (I don’t actually have a Ph.D in math),’ before he started rating different situations individually, almost taking up the entire web page.

For example his first rating read, ‘Fries that undoubtedly have some derivative of cocaine infused into them: plus four stars.’

While his second stated, ‘Food that undoubtedly sends me down the road away from looking like Terminator Two Arnold and toward looking more like Tom Arnold: negative five.’

Poopy food: One of the most absurdly detailed reviews came from Andrew G. rating a San Francisco chain saying McD’s is great for ‘poopy food’

Wrong order: After one of the McD’s employees gave away someone’s McNuggets order Michael was devastated

Stock exchange: This guy compared McDonald’s to the NYSE and rated the staff on their shouting skills

Confusing: Customer Nikki wrote a poem to one of the chains and it doesn’t make too much sense

Drug the fries: Thomas gave a raving review about a Chicago chain and even said they must put dopamine in the fries because they’re addicting

Parfaits: This guy is so obsessed with the parfaits at McD’s that he joked he wouldn’t care if they were made out of babies

While most of the hundreds of ratings on the different chains were short and stern such as: ‘Bad. Don’t come here,’ there were also a lot of lengthy replies.

One of the most absurdly detailed reviews came from Andrew G. rating a San Francisco chain.

‘When you go to McDonald’s you basically have hit rock bottom and it’s amazing,’ he started out his hilariously disturbing report.

‘I don’t understand why people complain about stomach aches and finding hair in their food.

‘Typically I only eat McDonald’s when I really can’t feel any worse so even if I found a turd in my fries I’d probably still eat it because this place is great for poopy food when you’re feeling like a turd.

‘I’d probably even eat a burger if they spit in it. Whatever, still so good and it’s gonna make me have explosive diarrhea no matter what.

‘All for only eight bucks! I highly recommend this restaurant for anyone feeling like a brown log, wants to feel great up until the instant you finish the food and then has a great book to read on the toilet cause you’re gonna need it. Also a hot date spot,’ he concluded.

Considering McDonald’s has been around forever and they’re all over the place there are many different chains on Yelp that people have reviewed and it’s quite entertaining.