Controversial former champion Margaret Court was set to receive an accolade before tonight’s fourth round match between Nick Kyrgios and Rafael Nadal – but she still received a serve from John McEnroe about her outspoken views.

It is the 50th anniversary of 77 year-old Court achieving the Grand Slam – winning all four Majors in one year – but her uncompromising opinions as a Christian preacher about LGBT matters have made her a polarising figure.

The fiery American became the latest high profile figure in the game to attack her, coinciding with the on court presentation. 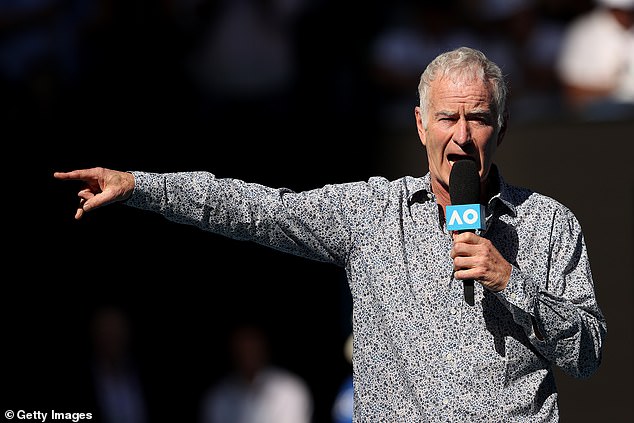 ‘There’s only one thing longer than the list of Margaret Court’s tennis achievements: it’s her list of offensive and homophobic statements.,’ said McEnroe in his Commissioner of Tennis spot on Eurosport.

‘About transgender children and LGBTIQ – it’s all the work of the devil…tennis is full of lesbians…it is sad for children to be exposed to homosexuality. Serena, do me a favour; get two more Grand Slams this year and get to 25, so we can leave Margaret Court and her offensive views in the past, where they both belong.’

McEnroe, an East Coast liberal, also alleged that Court made favourable comments about the apartheid regime in South Africa was never likely to be a natural ally of a conservative West Australian. 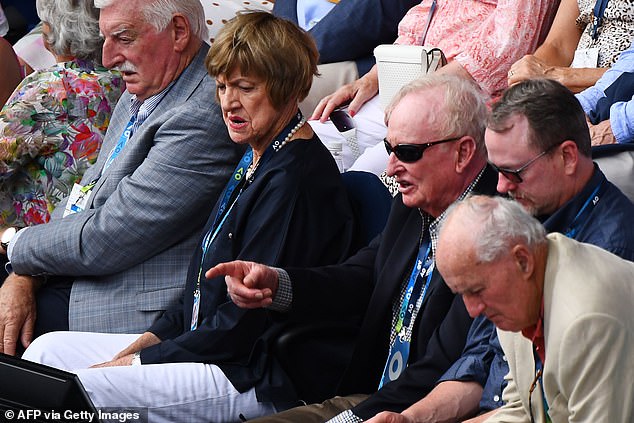 Court (second-left) at the Australian Open, sitting next to compatriot and ex-player Rod Laver

Court has always maintained that she does not hate anyone, and Tennis Australia has faced a delicate line to walk, given that she has some public support in Australia, and that they honoured Rod Laver’s Grand Slam achievement a year ago.

Trying to keep her visits to the Open as low profile as possible, they had long planned to do something before the fourth round match on the second Monday.

Ironically, this turned out to be just before the highest profile match of the tournament to date, with an enormous TV audience expected to tune in.

Andy Murray’s father-in-law Nigel Sears had reason to celebrate at a venue that has very much mixed memories for him.

Veteran coach Sears is guiding the career of Estonia’s number 28 seed Anett Kontaveit, who reached her first Grand Slam quarter-final when she came back to beat rising Polish star Iga Swiatek 6-7 7-5 7-5 in the fourth round. 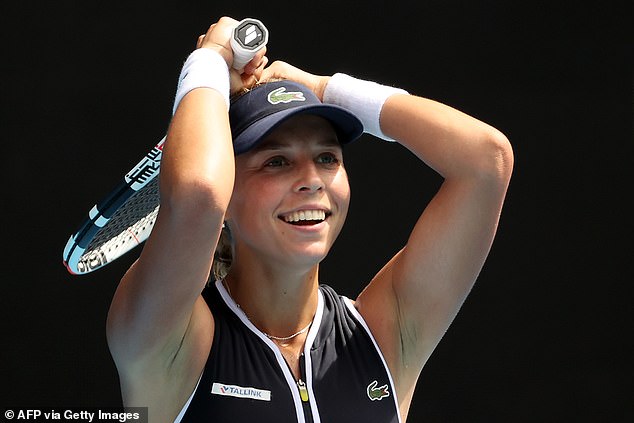 Sears dramatically collapsed inside the Rod Laver Arena four years ago during a match of his then player Ana Ivanovic while his son-in-law was playing on the next door Margaret Court Arena.

While a heart attack was suspected at the time it turned out to be a severe case of food poisoning. In the last eight Kontaveit now plays Wimbledon champion Simona Halep, who beat Elise Mertens 6-4 6-4.

GB’s last singles survivor in the junior singles, London’s Arthur Fery, reached the third round when he beat the number 14 seed from China Hanwen Li 6-3 4-6 7-5.

Tennis players were queuing up to pay tribute to basketball legend Kobe Bryant, who was well-known in the sport and wrote a children’s book about tennis last year. 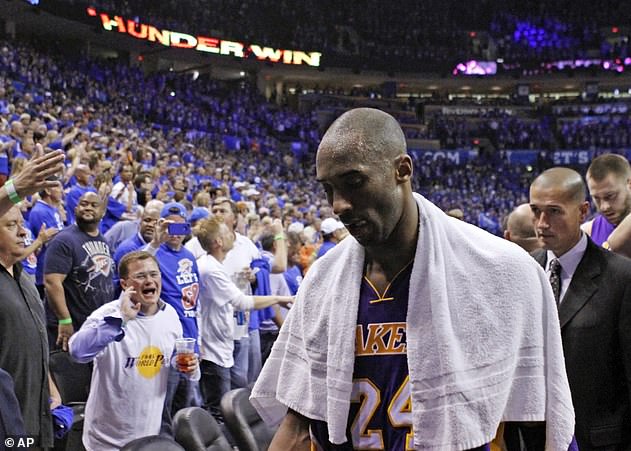 He was a regular visitor to tournaments and spent several days at the US Open in September. ‘My heart truly mourns over the news today,’ said Novak Djokovic.

‘Kobe was a great mentor and friend. There are not enough words to express my deepest sympathies to the Bryants and every family suffering from this tragedy.’

‘Woke up this morning with the horrible news of the tragic death of one of the greatest sportsmen in the world,’ wrote Rafael Nadal via his social media. ‘

My heart truly mourns over the news today. Kobe was a great mentor and friend to me. You and your daughter will live forever in our hearts. There are not enough words to express my deepest sympathies to the Bryants and every family suffering from this tragedy. RIP my friend pic.twitter.com/VRmgaOaITT

Kobe Bryant, his daughter Gianna and other passengers. My condolences to his wife and families. I am in shock.’

Coco Gauff described him as ‘the definition of intensity’. Maria Sharapova tweeted: ‘I will never forget your generosity, and the time you set aside in some of my most difficult moments.’

Perennial nearly man Gael Monfils disappointed again when he was beaten 6-2 6-4 6-4 by Dominic Thiem, who will face the winner of the Kyrgios versus Nadal match.