McFly star Tom Fletcher has joked his ‘competitive’ band mate Harry Judd is ‘secretly’ giving him poor advice ahead of his Strictly debut – 10 years after he won the Glitter Ball trophy.

The musician, 36, confessed he wanted to do the BBC show before he gets ‘too old’ and Harry, 35, was in ‘much better shape’ than he is now when he competed in 2011.

Tom, who shares children Buzz, 7, Buddy, 5, and Max, 3, with wife and I’m A Celeb winner Giovanna, 36, admitted he feels under ‘pressure’ to perform – and hopes by the end of the competition he’ll at least be able to touch his toes.

‘I don’t know if I should trust him’: McFly star Tom Fletcher has joked his ‘competitive’ band mate Harry Judd is ‘secretly’ giving him poor advice ahead of his Strictly debut

He said: ‘I can’t shut Harry up about Strictly, he’s been talking about the show for 10 years.

‘I don’t know whether I should trust his advice or if he’s trying to secretly steer me in the wrong direction because he’s quite competitive.

‘I’ve always felt if I do it there would be pressure because Strictly has been a part of McFly’s life and our history, it was an amazing time for our band when he won Strictly so, it has been his thing for a while. 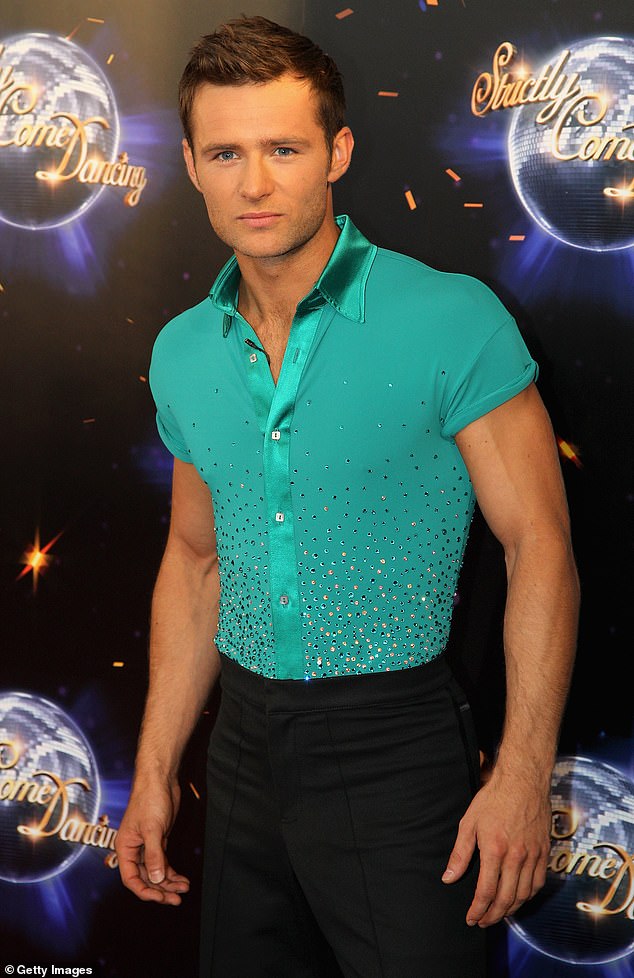 ‘Pressure’: The musician, 36, confessed he wanted to do the BBC show before he gets ‘too old’ and Harry, 35, (pictured) was in ‘much better shape’ than he is now when he competed in 2011 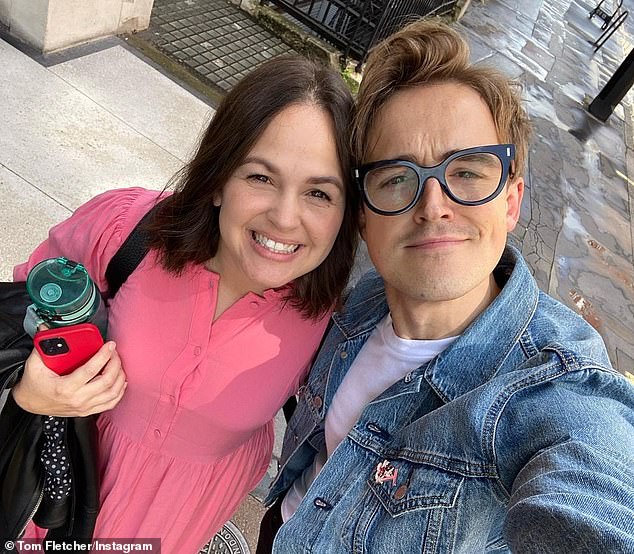 ‘I wanted to do it before I get too old’: Tom, who’s married to I’m A Celeb winner Giovanna (pictured), hopes by the end of the competition he’ll be able to touch his toes

‘Personally, I wanted to do it before I get too old. I already can’t touch my toes and Harry has 10 years on me and he was in much better shape.’

Despite having good intentions after signing up to the show earlier this year, Tom admitted his diet and fitness ‘went out the window’ and it’s ‘too late’ for him to improve his physicality.

He said: ‘When I signed up for Strictly at the beginning of the year I thought, I’ll get in shape and do yoga and Pilates and eat well and it just went out the window.

‘I literally tried to touch my toes and do some stretching this morning, knowing full well it’s way too late and that ship has sailed. 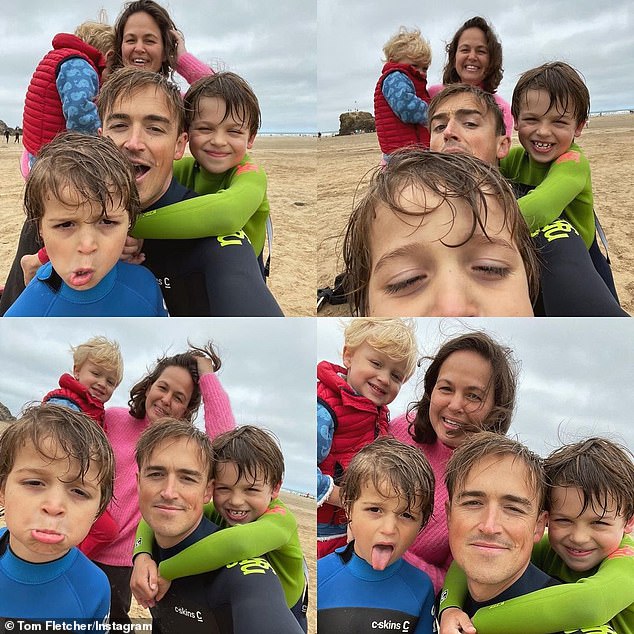 ‘I want to have the best time’: Tom shares children Buzz, 7, Buddy, 5, and Max, 3, with wife Giovanna (pictured), who are all excited to see him take part in the Strictly experience 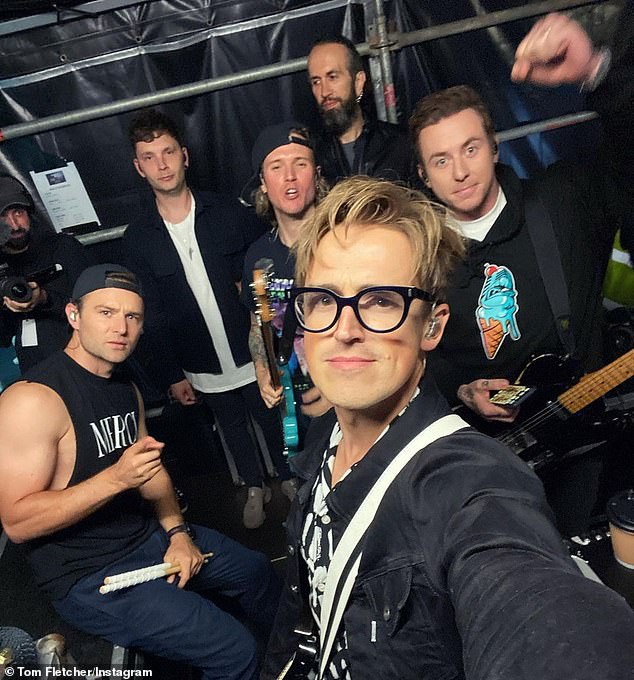 ‘Terrifying’: Tom said he doesn’t know how he will ‘cope’ with the nerves ahead of the Strictly shows, and being without band mates, Harry, Danny and Dougie will leave him feeling exposed

While he’s used to performing, Tom said he doesn’t know how he will ‘cope’ with the nerves ahead of the Strictly live shows, and being without band mates, Harry, Danny and Dougie, as well as his guitar, will leave him feeling exposed.

He explained: ‘On stage, I have my three band mates and my guitar in front of me, and mic stand and that’s like your shield – it’s genuinely amazing what having an instrument does for you, it’s like your safety blanket, taking that away is really weird.

‘Even at a McFly show, if I don’t have a guitar for a few minutes… and suddenly being on my own, without my band mates and on the dance floor with no instrument and not singing, it will be absolutely terrifying.

‘Now, I’ll be performing without the band on live TV and it’s going to be terrifying and hard. I don’t know what I’ll do to cope; you just, you know get your head down and get through it.’

STRICTLY COME DANCING 2021: WHO ARE THE CONTESTANTS?

Tilly says: ’I’m going to put my heart and soul into this and can’t wait to get my dancing shoes on!’

Nina says: ‘I think I should do this before I’m too old and can’t walk anymore. I just want to grab life by the horns and just enjoy it.’

Fun fact: Nina is a JDRF Ambassador and was awarded an OBE in the 2021 New Year’s Honours List.

Adam says: ‘I’m really looking forward to doing something totally different and challenging myself away from the pool.’

Ugo says: ‘What a dream come true! Strictly is the biggest entertainment show on TV and I can’t wait to show everyone I’ve got more than just dad dancing moves.

Fun fact: Beginning his rugby career at Harlequins in 2002, Ugo went on to make 241 appearances for the club where he scored 89 tries, won a Premiership and made his England debut in 2008.

Fun Fact: Apocalypse Wow hosts AJ has featured on a whopping 14 TV shows this year, competing in the likes oF Cooking With The Stars and Celebrity Karaoke Club. She has appeared as a panelist on Strictly Come Dancing: It Takes Two in the past, too.

Fun Fact: John is set tp be part of the first ever all-male partnering – the first in 17 years of the show.

Fun fact: Sara was the youngest ever dragon on BBC show Dragons’ Den.

Fun fact: Dan recently quit Football Focus after 12 years at the helm and has been covering Tokyo Olympics.

Greg says: ‘It’s about being out there and exposing yourself as someone who can’t dance, and learning.’

Fun fact: Greg is married to the actress Emma Thompson who he met while filming Sense and Sensibility.

Rose says: ‘I hope I will do the deaf community proud and break down more barriers. I am also very excited to learn an incredible new skill.’

Judi says: ‘I’m truly looking forward to pushing myself in something that I could have only dreamed of doing and now it’s actually coming true!’

Fun fact: Judi began comedy when she performed a set in front of her class for a degree module.