McGregor opens as a HEAVY favorite in an MMA match vs. Mayweather

It goes without saying that 41-year-old retired pugilist Floyd Mayweather Jr. would be a heavy underdog in a theoretical mixed martial arts match against UFC lightweight champion Conor McGregor. But now that Mayweather has publicly expressed his interest making his MMA debut, one Las Vegas sportsbook considers the undefeated, five-weight division boxing champion to be slightly less of an underdog than McGregor was when the two announced their August bout in February of 2017.

Should Mayweather face the 29-year-old McGregor in the octagon he would be a +650 underdog, according to the line put out by the Westgate SuperBook, meaning gamblers would win $650 with a $100 bet.

Betting is limited to $2,000 at the Westgate, which mandated the the fight must be MMA only and take place before September of 2019 or the bet is off. 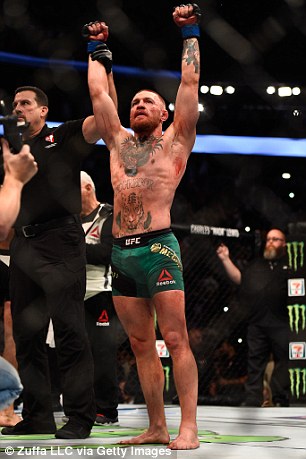 Floyd Mayweather Jr. moved his record to a perfect 50-0 with his 10th-round stoppage victory over boxing novice Conor McGregor (right). However, he would be considered a major underdog if he were to face the Dublin native in the Octogon

When Westgate initially made a line for the fight, Mayweather was an astounding -2500 favorite against McGregor, who was a +1100 underdog in his first professional boxing match

Their previous meeting – which Mayweather easily won with a 10th-round stoppage – generated an estimated $65 million in bets, which is the most ever for a boxing match, Nevada officials told ESPN.

Betting closed with Mayweather as a +500 favorite, although that likely had a lot to do with all of the Irish tourists betting heavily on McGregor that weekend.

However, when Westgate initially made a line for the fight, Mayweather (50-0, 27 KOs) was an astounding -2500 favorite against McGregor, who was a +1100 underdog in his first professional boxing match.

Despite the incredible disparity between the boxing ability of Mayweather and McGregor, the fight did generate a reported $370 million and the former is said to have earned a nine-figure purse while the latter pocketed $30 million.

Of course, there is no guarantee Mayweather and McGregor would fight if and when the Michigan native and former U.S. Olympian moves to MMA. The problem is, if he were to lose before facing McGregor, he would likely diminish the interest in an MMA bout between his former boxing rival. Since retiring (again) from boxing, Mayweather has become a successful promoter

Mayweather, who is supposedly retired, previously told TMZ Sports that he has been in contact with UFC welterweight champion Tyron Woodley, who could train the five-weight division champion-turned promoter.

‘I’m gonna start soon,’ said Mayweather, who once boasted he could make $1 billion in the UFC. ‘We’ve been texting back and forth. We talked a couple times, so we gonna start working out real soon.’

UFC president Dana White told ESPN that the mixed martial arts promotion was negotiating a deal with Mayweather, who says he would need a six- to eight-month training period to prepare for a move to MMA. 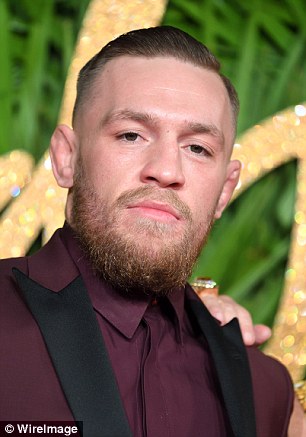 McGregor is 0-1 as a boxer, but did pocket a reported $30 million purse for his efforts

The two had discussed boxing against each other for years before they met in Mayweather’s final and McGregor’s first boxing match back in August. The fight somehow lasted 10 rounds before a stoppage, but it is generally believed that Mayweather was never in any danger against McGregor, who, according to his sparring partners, never stood a chance.

Retired welterweight Paulie Malignaggi (36-8) found McGregor to be a poor challenge, and he wasn’t even in fighting shape when the two sparred.

‘Just figure it this way,’ Malignaggi explained. ‘If I can show up in 20, 30 percent shape, less than 24 hours [after] a cross-country flight and go 12 rounds with you and get the better of you for most of the 12 rounds, you got a problem if you’re going up against Floyd Mayweather.’

‘My son is so great he hardly trained and still beat that man easily,’ Mayweather Sr. told the Philadelphia Voice.

During McGegor’s training camp, the MMA star’s team put pictures of him ostensibly dominating Malignaggi on social media. However the Brooklyn-born Malignaggi insists he was shoved to the canvas and that the pictures were misleading and intended to give fans confidence that McGregor had a chance to beat Mayweather.

‘People choose to be deceived,’ Malignaggi said of the throngs of McGregor supporters who bought tickets and bet on the fighter. ‘They wanted to be deceived, but the writing was on the wall.’

Another sparring partner, South African welterweight Chris Van Heerden, said he didn’t ‘give [McGregor] any chance’ when asked about the fight in February of 2017.

Despite the incredible disparity between the boxing ability of Mayweather and McGregor, the fight did generate a reported $370 million and Mayweather is said to have earned a nine-figure purse.

Naturally, the man known as ‘Money’ will have his paycheck on his mind if he makes a move to MMA.

‘I haven’t even started training yet,’ Mayweather told TMZ. ‘I’m in [Los Angeles], moving around a little bit. … It’s all about presenting the right numbers. Of course, they gonna present the right numbers and we’re going to make it happen.’ 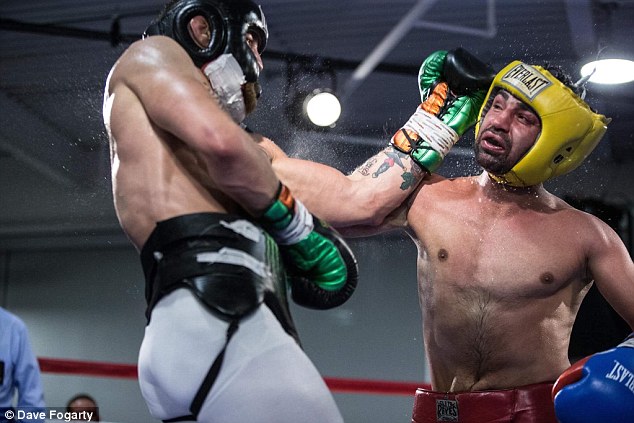 Sparring partner Paulie Malignaggi (right) said he out-boxed McGregor (left) even though he was out of shape and had just gotten off a cross-country flight. In other words, Malignaggi explained, McGregor never really stood a chance of beating a legend like Mayweather