ME & MY OPERATION: Beads for an enlarged prostate can spare a man’s sex life

About four years ago, I began waking in the night needing the loo but often struggled to urinate.

I looked up my symptoms and read that urine flow can be affected by an enlarged prostate.

I went to see my GP, who examined me and confirmed that this was, in fact, the case. I also had a blood test to check my PSA (a protein made in the prostate gland) level, to see if I might have prostate cancer, and this came back as 12.4 — a very high score.

I was referred to a urologist and he diagnosed prostatitis, which is inflammation of the prostate gland. The prostate sits around the urethra, which removes urine from the body, and that is why my urine flow had been affected.

I was told I didn’t need treatment and was relieved it wasn’t cancer. I was still getting up in the night now and then, but I could live with it.

Then, one morning in March last year, I felt the urge to go to the loo, but couldn’t. I kept trying, but nothing. So I panicked. I called my GP, who told me to come in.

The GP inserted a catheter as a temporary fix — which emptied into a bag strapped to my leg. She also referred me back to hospital.

Wearing the catheter was painful and I was constantly conscious of how I moved, worrying about leaks. I avoided socialising and needed time off work.

At my urology appointment a few weeks later, it was confirmed I had benign prostatic hyperplasia (BPH) — where the prostate enlarges. I was advised I might need surgery, but there was a year-long wait.

Researching my options, I came across prostate artery embolisation (PAE), a less invasive technique, where tiny beads are used to block the blood supply to the prostate, shrinking it.

I had read of men left incontinent or impotent after traditional surgery, and PAE appeared to have fewer side-effects. I asked my specialist and he said he could fit me in for PAE within three weeks. 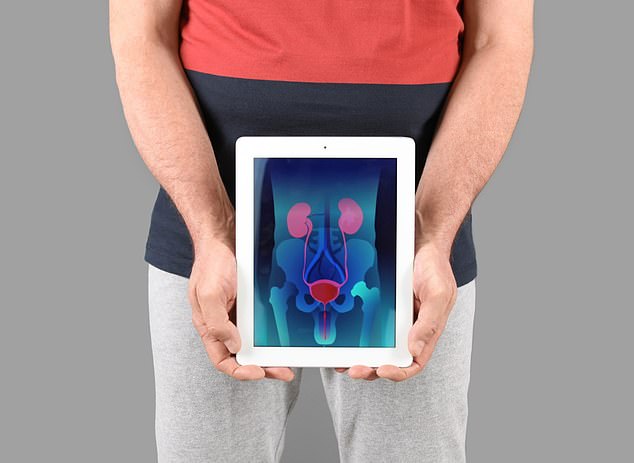 Did you know? The prostate is a walnut-sized gland that lies under the bladder and surrounds the urethra, the tube that passes urine

During the procedure, at the Churchill Hospital in Oxford, gel beads were inserted into the arteries that supply the prostate through a wire in my right groin. It is usually done under local anaesthetic, but I didn’t want to be awake for it, so I asked for a general anaesthetic.

I left the hospital a couple of hours later with a catheter fitted.

I felt some discomfort on the first night, so I took painkillers, but a day later I didn’t need to take any more drugs. After two weeks, the catheter was removed and I could urinate normally as the inflammation had reduced so much.

I am delighted with the results — I can live a normal life again.

BPH can be down to a family history or hormonal imbalance. Risk factors include obesity, heart disease and diabetes.

Like many men I see, John had done a lot of research, and had discovered prostate artery embolisation. This is a non-surgical way of blocking the arteries supplying blood to the prostate, which carries the hormones which encourage the excess growth.

From 2014, I have been involved in trials of the procedure, with great success. Approximately 80 per cent of patients found relief, with minimal side-effects.

SOME men experience post-embolisation syndrome after surgery, which leaves them feeling lethargic for a few days. It does pass on its own.

THE beads, or particles, may end up in the wrong blood vessels, but this is very rare.

‘PROSTATE artery embolisation treats the underlying cause of benign prostatic hyperplasia,’ says Dr Nigel Hacking, a consultant in interventional radiology at University Hospital Southampton NHS Foundation Trust. PAE is very safe. Only a few cases of the beads going to the wrong place have been reported, and none led to serious consequences.’

In April last year, NICE advised that PAE is safe and effective.

An operation called transurethral resection of the prostate (TURP) is the standard treatment for BPH. This involves cutting away part of the prostate. But it carries a risk of damage to the muscles or nerves surrounding the bladder, leading to incontinence or impotence.

PAE is usually done under local anaesthetic. We inject dye to see the arteries supplying the prostate with an X-ray camera.

The hundreds of microscopic gel beads we use come mixed in 12ml of fluid in a syringe. We feed in a catheter (a long, thin tube) via an artery at the top of the right leg, all the way to the prostate arteries, then inject the beads through the catheter to block the arteries.

A CT scanner hooked to a screen helps us see the beads have gone to the right place. The procedure takes an hour to an hour-and-a-half, and men can go home the same day. In the following weeks, the prostate shrinks back to a normal size. The beads remain there for life.

Almost five years of evidence points towards this being the safest way to shrink enlarged prostates, and I believe the long-term results will be good.