ME & MY OPERATION: Keyhole op for a faulty heart slashes recovery times

Working with children and having seven grandchildren, I’ve always been very energetic. But two years ago, I started having dizzy spells and heart palpitations.

I thought it was anxiety and I had to sit down to wait for it to pass.

Then, in August 2017, I had two episodes minutes apart, so I called 111 and the operator sent an ambulance to take me to Blackpool Victoria Hospital. This was alarming as I hadn’t thought anything was seriously wrong.

The doctors ran many tests, including ECGs (electrocardiograms) to trace my heart’s electrical pattern. After two weeks in hospital, they diagnosed hypertrophic obstructive cardiomyopathy, a thickening of the wall (septum) that separates the two sides of the heart.

Pioneer: Yvonne Sutcliffe, 52, from Blackpool, was the first in the UK to have a keyhole op FOR abnormal thickening of the heart muscle

The thickened wall was bulging into my lower pumping chamber, so there was less room for oxygenated blood. It was also partly blocking the aorta, the main artery which pumps oxygenated blood around the body. Instead, this blood was being forced backwards into the upper chamber.

My dizziness was due to a lack of oxygenated blood to my brain, and the palpitations were due to my heart working overtime.

The doctors said the problem could get worse and I could suffer heart failure or a heart attack, which was terrifying.

I was told I would ultimately need surgery to shave away the bulge, but in the meantime I was prescribed a beta blocker to slow my heart rate. However, it only added to my dizziness and I felt constantly exhausted.

Over the next year, I was too tired to play with my grandchildren and always needed time off work — it was miserable.

Finally, in July last year, I was told I should go ahead with open chest surgery — a major undertaking where they would saw through my breastbone, and recovery could take up to three months.

It sounded frightening, but then the surgeon explained he could try a moderated version, operating through a small ‘keyhole’ incision, which would mean a quicker recovery; I could be back at work in six weeks.

I’d be the first UK patient to have it, which was daunting, but it sounded worth it.

I had the operation under general anaesthetic in August 2018, spent two nights in intensive care and stayed in hospital for a week.

The incision site was sore, but after the surgery I felt more energetic immediately.

I still take a low dose of bisoprolol to take the strain off my heart, but I can work and play with my grandchildren again. I feel fantastic!

Hypertrophic obstructive cardiomyopathy is an abnormal thickening of the wall that divides the heart. It’s congenital, so lifestyle makes little difference and often it has no symptoms until the wall bulges more with age.

This bulging creates less room for oxygenated blood in the left ventricle, or lower pumping chamber, and the outflow of blood from the heart can end up being blocked, too, so patients become tired and breathless. 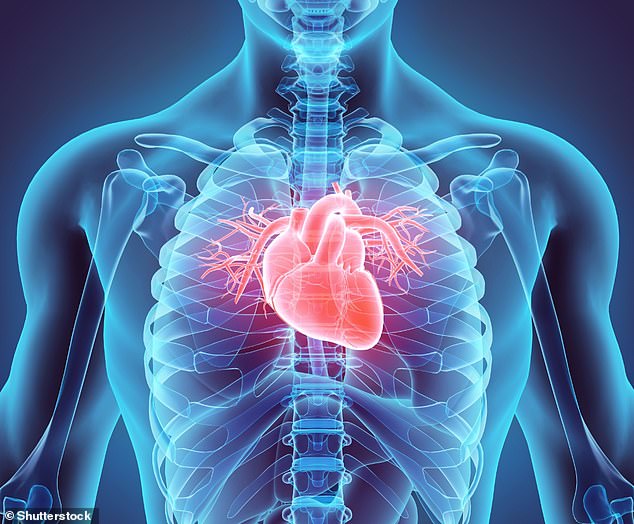 Did you know? One in 500 has a dangerous thickening of the heart, treated with open surgery

There is a small risk of damaging the electrical signal pathways within the heart, meaning the patient would need a pacemaker.

There is also a risk of removing too much muscle and leaving a hole, or too little, which would mean performing a second open chest operation.

‘Doing this endoscopically is very new,’ says Professor David Hildick-Smith, a consultant cardiologist at Brighton and Sussex University Hospital NHS Trust. ‘But for a patient with symptoms where nothing else has worked, it is an interesting addition to the treatment pathway.’

Doctors can prescribe beta blockers, which slow the heart and give the left ventricle more time to fill with blood, while patients are on a waiting list for surgery. This is usually open chest surgery, involving a 12cm to 15cm incision to reach the heart. We then shave the abnormal thickening using a scalpel.

But not all patients are fit enough for this, so instead we might inject alcohol into the septal wall to shrink the tissue. This is done at only a few specialist centres and tends to be less effective than surgery.

However, at Blackpool we have now treated three patients endoscopically, working through a keyhole to remove part of the thickened muscle. Recovery takes around half the time.

The operation takes four to five hours and I work with my colleague, Gregor Laskawski: one of us operates, the other observes and learns.

We put the patient on a heart bypass machine so the heart is not full of blood during the procedure, then we put a camera probe down the patient’s throat and thread it to the heart, where it can send images to a screen.

I make a 5cm incision near the right nipple to reach the heart’s upper left chamber, which I open using tiny retractors. Then I go through a valve into the left ventricle, where, using tiny scalpels and scissors, I cut away thickened muscle on the septal wall.

When we’re sure all is working normally, we close up the chest. Most patients feel significantly better within a day.