ME & MY OPERATION: New implant beat my back pain in an instant

While I was working as a roof tiler on a building site in 2007, a freak gust of wind blew me forwards and back again. My head hit my ankle, sending searing pain down my back and through my right knee.

I carried on hobbling to work, but couldn’t sleep through the pain. My GP suggested paracetamol. It didn’t work.

Four months later, and still in agony, I went back to my GP. This time, he referred me for a scan, which showed a tear to the anterior cruciate ligament in my knee.

I had an operation to fix it, but the pain in my back was ten times worse. An MRI scan showed damage to a disc in my back, a chipped vertebra and nerve damage around the spine. I was told the damage was too complex for surgery.

Pain: Dean Walker, 42, a swimming club adviser, from Chelmsford, Essex, suffered years of discomfort after working as a roof tiler on a building site in 2007

Over the next year, I was given painkilling injections, morphine-based medication and a TENS machine, which I held to my back to mask the pain with a fuzzy feeling. But none of it really worked.

I had to give up work. Before the accident, I’d also played water polo nationally and always loved walking — now I could barely put one foot in front of the other.

In autumn 2010, I saw Dr Adnan Al‑Kaisy at St Thomas’ Hospital in London and he told me about a trial, where a device called the Senza would be implanted in my back to block pain messages to the brain.

I would need electrodes in the epidural space — the gap around the spinal canal and surrounding nerves — which would be connected to wires leading to a generator containing a rechargeable battery.

The size of a large matchbox, it would initially sit outside the body and send impulses to the electrodes to block the pain.

In May 2012, I had the electrodes inserted under sedation. Straight away, the pain I’d had for years disappeared. It was amazing.

After around ten days, I accidentally yanked out the wires — and the stabbing pain was back. 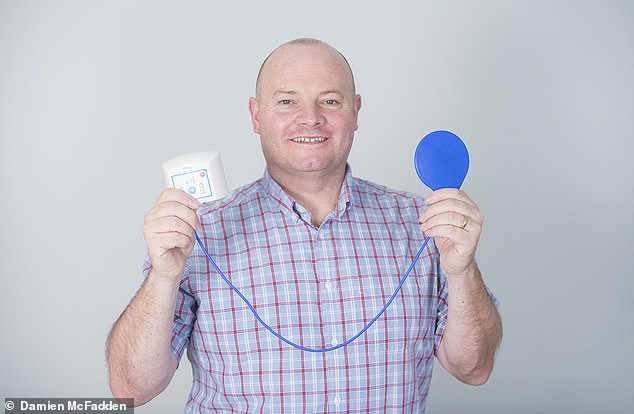 Breakthrough: In autumn 2010, he saw Dr Adnan Al‑Kaisy at St Thomas’ Hospital in London, who told him about a trial where a device called the Senza would be implanted in his back

But Dr Al-Kaisy said that, since this showed the system had worked for me, I was suitable to have the whole device implanted. So I had another 45-minute operation to implant the generator just above my hip.

Later that day, I felt well enough to go out for a milkshake.

I have a small scar on my back and the battery juts out slightly and sometimes catches on my belt. I recharge it every night through the skin, simply holding a recharging pad over the area for 90 minutes.

I have a remote control and can turn up the impulses if I get a twinge of pain.

It has been life-changing. The pain has gone and I now have a new job travelling round the country, advising swimming clubs. The device constantly runs to keep the pain at bay.

Sometimes, if I accidentally switch it off, the pain surges back. But doctors hope that new nerves will grow around the damaged site so, eventually, the pain will naturally fade. Now I can work and play with my three daughters. This has helped me live a full life again.

Dr Adnan Al-Kaisy is a consultant in pain medicine at Guy’s and St Thomas’ NHS Foundation Trust in London.

Around two million Britons have back pain and, in 20 per cent of cases, this is due to nerves that have become over-sensitised (often as a result of falling awkwardly) and bombard the brain with pain messages.

Patients often cannot work or sleep and it costs the country £6 billion annually.

Doctors can offer painkillers, including opioids, but patients build up a tolerance to these after three months. We can also encourage gentle exercise, such as yoga and Pilates, and offer painkilling steroid injections. 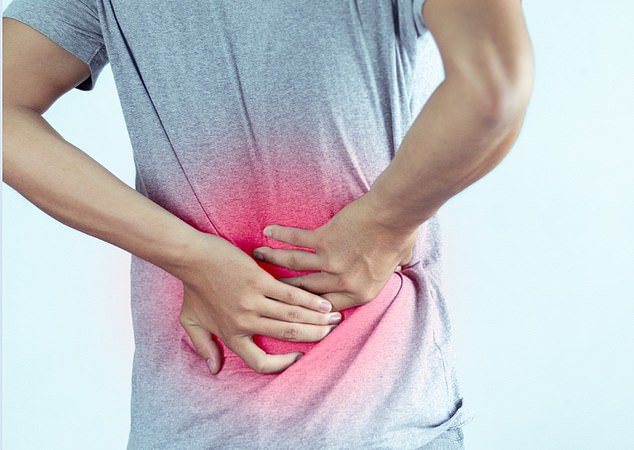 Did you know? Around two million Britons have back pain and, in 20 per cent of cases, this is due to nerves that have become over-sensitised

Neuromodulation — blocking pain signals using electrical stimulation — has been around for decades.

The stimulator sends electrical impulses to overactive nerves to block pain messages from reaching the brain.

It has been effective, but had limitations: patients felt buzzing from the impulses and had to switch the device off to sleep or drive, as it could distract them.

At Guy’s and St Thomas’, we were one of the first to use the Senza device, which uses stimulation 20 times faster, so the patient cannot feel the impulses and can leave the stimulator on all the time.

There is a 4 per cent risk of infection, so patients have antibiotics before, during and after the procedure.

There is a 2 to 3 per cent chance the wires will migrate, meaning the patient would need another procedure.

Some 4 per cent of patients feel temporary pain around the battery implant site. Dr Ganesan Baranidharan, a consultant in pain medicine at Leeds Teaching Hospitals NHS Trust and Spire Leeds Hospital, says: ‘We can take it out — and one in ten find the battery annoying.

‘However, Senza is reversible. I’m a big proponent of this technology, which changes people’s lives. We do hundreds each year.’

The Senza system comprises two long wires with eight 3mm electrodes on the end of each, placed in the epidural space in the spine and connected via a generator containing a battery, which sends impulses to block the pain. Implanting it takes 30 to 45 minutes under local anaesthetic and sedation.

First, we make a 5cm incision in the lower back and feed each wire into the epidural space using a hollow needle. We anchor the wires to ligaments using silk sutures and connect them to extension leads that connect to an external battery.

If the pain decreases by more than 50 per cent over the next two weeks, the patient has a second 45-minute operation to implant the battery.

We make a 4cm incision above the buttock and create a pocket under the skin, tunnelling the wires from the electrodes under the skin and connecting them up. We can do this using local anaesthetic and the patient leaves hospital the same day.

The battery should last ten years before it needs to be changed. This device pays for itself in four to five years, since patients will no longer need medication or repeated GP visits and can go back to work.

We have been using Senza as part of an ongoing trial called Modulate for patients who had not had surgery, and saw that 75 per cent returned to work; without this device, most of them wouldn’t work again.

An earlier, smaller study in 2014 involving 21 patients found that, using this device, pain was reduced in 80 per cent of cases and 75 per cent returned to work (in some instances, they had been off for up to three years).

Chronic pain is a huge problem, which is why the decision by NICE last month to approve Senza for chronic back and leg pain is a great step forward.

We want to recruit more patients to the Modulate trial and hope to show that this could work for other kinds of chronic pain, too. This could help thousands more.