Donald Trump tried to grab the steering wheel of his presidential vehicle on January 6 and lunged at a Secret Service agent when he was ‘furious’ they would not take him to the US Capitol, said Cassidy Hutchinson, the former assistant to Mark Meadows.

She also claimed her former boss, along with Trump lawyer Rudy Giuliani, sought pardons from the former president linked to their efforts on January 6.

Among the more explosive points of the former staffer’s testimony include Trump’s alleged insistence on joining his supporters at the Capitol – who he was told in advance were armed.

‘I’m the effing president, take me to the Capitol now,’ she said he ordered.

When Secret Service refused, Hutchinson said agents told her that he lunged at the steering wheel of his car – known as The Beast.

‘Sir, you need to take your hand off the steering wheel. We’re going back to the West Wing, we’re not going to the Capitol,’ Hutchinson was told Secret Service agent Richard Engel said.

Former Deputy Chief of Staff Tony Ornato ‘motioned toward his clavicle,’ she added, as a sign the president went for his security detail’s throat.

Other evidence of Trump’s explosive temper came when Hutchinson testified that the former president was so angry that his then-Attorney General Bill Barr told the Associated Press that there was no widespread election fraud that he threw food at the wall.

Hutchinson said she ‘first noticed there was ketchup dripping down the wall, and there was a shattered porcelain plate.’

‘The valet had articulated that the president was extremely angry at the attorney general’s AP interview and had thrown his lunch against the wall, which was causing them to have to clean up, so I grabbed a towel and started wiping the ketchup off the wall to help the valet out,’ she said.

Her testimony – and the hearing as a whole – also paints a picture of Trump having to be dissuaded from marching to the Capitol with his supporters that day – despite Meadows claiming in his book that the former president was not serious when he told his supporters he’d do so.

Other damning allegations from Hutchinson during her appearance in front of the January 6 committee on Tuesday included: 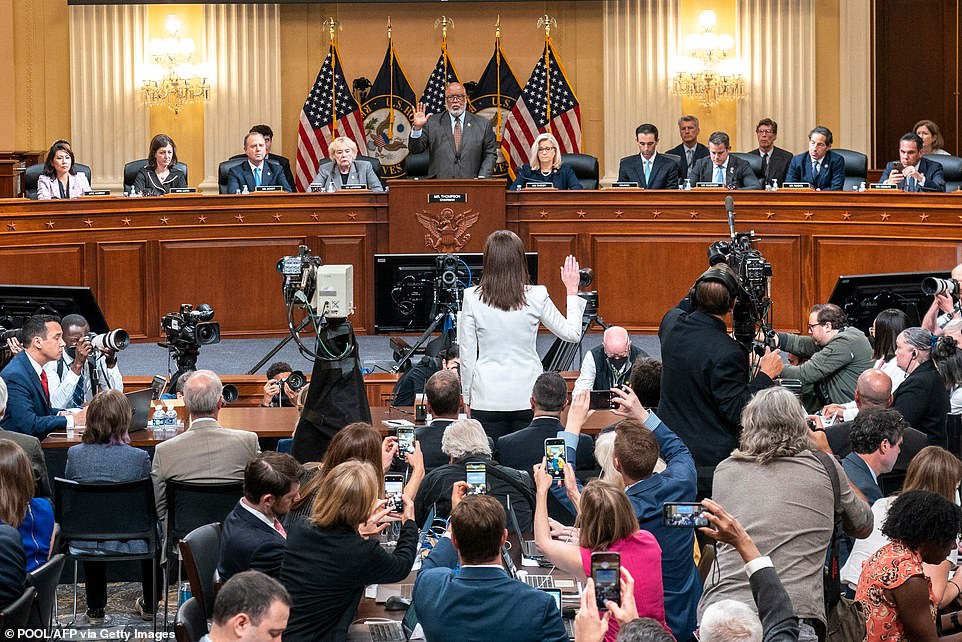 ‘I was aware of a desire of the president to potentially march to the or accompany rally attendees to the Capitol,’ former Trump aide Nick Luna testified in a videotaped deposition shown on Tuesday.

A National Security Council chat log shown by the committee suggests he was hell-bent on going with supporters and staffers were ‘begging him to reconsider.’

During her live testimony, Hutchinson recalled a conversation with House GOP Leader Kevin McCarthy during which he allegedly begged her to dissuade Trump from going to the Capitol.

She said McCarthy was ‘frustrated and angry.’ Hutchinson told him she was not aware of Trump’s plan to go to the Capitol at the time.

‘He just said it on stage, Cassidy, figure it out,’  McCarthy apparently told her.

Former White House Counsel Pat Cipollone told her ‘we’re going to get charged with every crime imaginable’ if Trump is allowed to march to the Capitol.

Hutchinson also told the January 6 committee that Trump was ‘furious’ that some of his supporters, who were armed, could not get into the official grounds of his Stop the Steal rally near the White House that directly preceded the riot.

He was apparently angry that the size of the crowd coming to hear him speak did not appear as big as he wanted it to – due to his armed supporters not getting past the security magnetometers.

‘Take the effing mags away,’ she said Trump ordered, referring to the metal detectors attendees had to go through.

‘Who cares if they have weapons, they’re not here to hurt me.’

The committee then played a clip of Trump’s comments at the rally urging his supporters to march to the Capitol – words that appeared stark in the context of testimony claiming he knew they presented a security risk.

Hutchinson admitted to being the White House staffer behind a note written on executive office stationary on January 6 that stated: ‘Anyone who entered the Capitol illegally without proper authority should leave immediately.’

‘Illegally’ had been scribbled out.’

The note, she said, was a draft statement dictated by Meadows and former White House lawyer Eric Herschmann.

Toward the end of the first half of the hearing, Trump took to his app Truth Social to say he ‘hardly knows’ Hutchinson.

‘I hardly know who this person, Cassidy Hutchinson, is, other than I heard very negative things about her (a total phony and a “leaker”), and when she requested to go with certain others of the team to Florida after my having served a full term in office, I personally turned her request now,’ he said.

Hutchinson’s exit before a 10-minute recess was met with applause by progressive Arizona Rep. Ruben Gallego, who attended the hearing as a viewer.

The second half began with a short clip of the committee’s interview with disgraced former general and Trump adviser Michael Flynn.

Flynn pleaded the Fifth Amendment when Cheney asked him whether he believed in a peaceful transfer of power.

Hutchinson also confirmed reports from the time of the riot that Trump’s Cabinet was considering invoking the 25th Amendment to remove the then-president from office – and that it was former Secretary of State Mike Pompeo who brought it to her boss’s attention.

‘Mr. Pompeo reached out to have the conversation with Mr. Meadows in case he hadn’t heard the discussions amongst the Cabinet secretaries. And from what I understand, it was more of this is what I’m hearing, I want you to be aware of it,’ she testified. 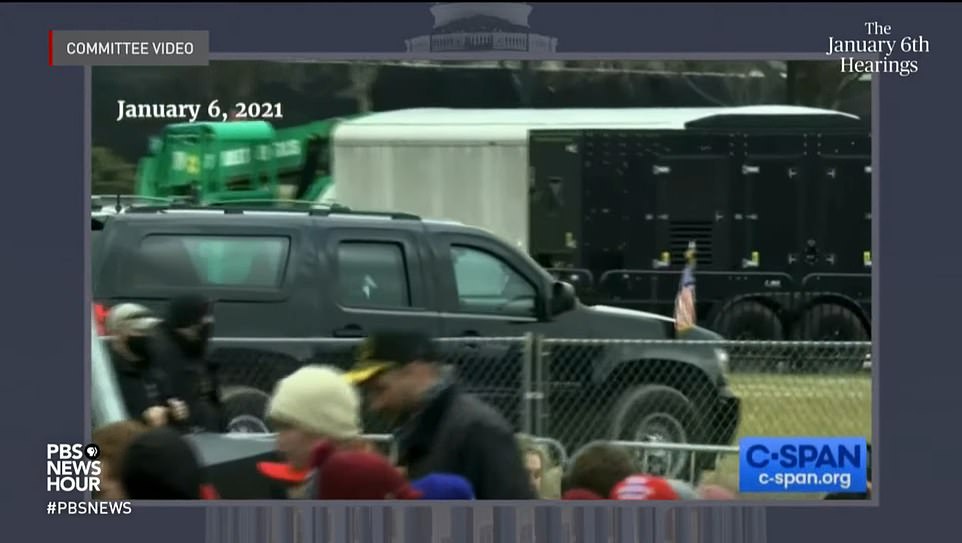 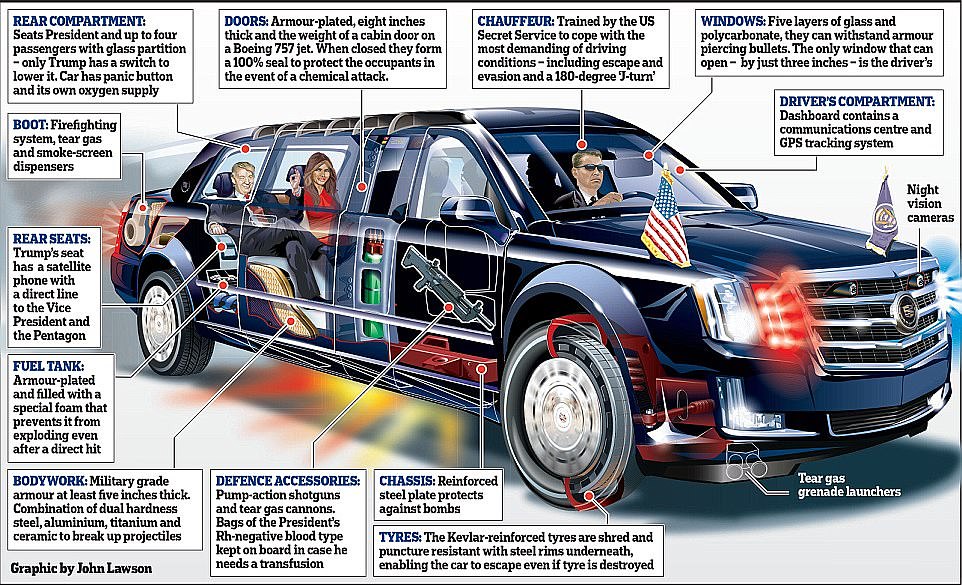 The president’s vehicle is a heavily-armored car known as ‘The Beast,’ driven by Secret Service agents. This graphic shows another similar model of The Beast to the SUV version Trump was in on January 6 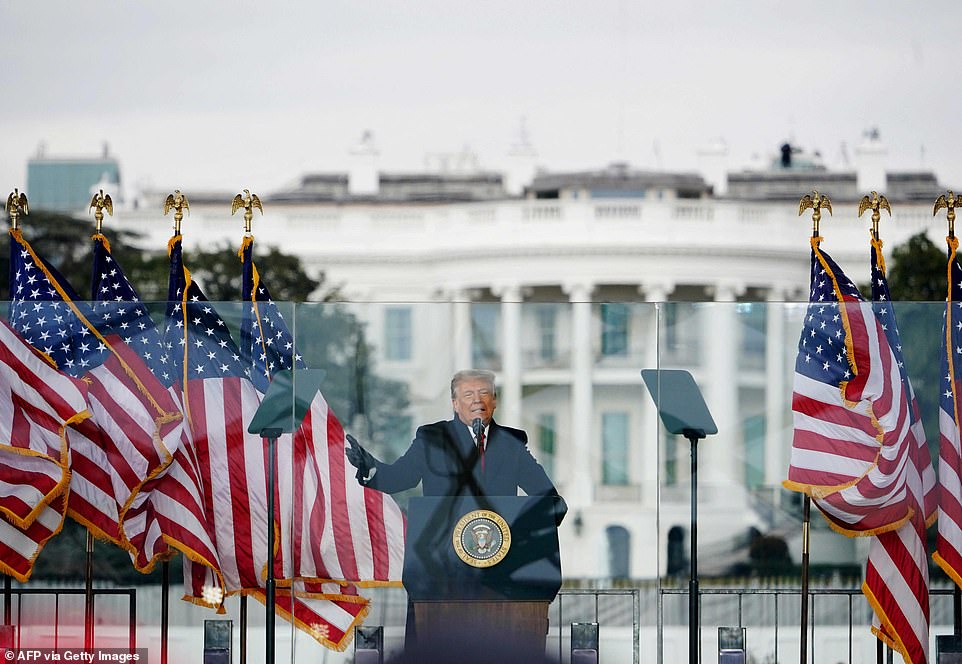 The former senior White House aide testified that Trump was aware that some of his supporters could not get into his Stop the Steal rally because they were armed – and that he was reportedly ‘furious’ about it.

The ex-White House staffer was revealed to be the January 6 committee’s surprise witness late on Monday night for the hastily-announced hearing.

She told lawmakers in her first public testimony of the investigation that Trump’s former lawyer Rudy Giuliani told her January 6 would be a ‘great day’ as she escorted him out of a White House meeting earlier that month.

‘He looked at me and said something to the effect of, “Cass are you excited? The 6th is going to be a great day”,’ Hutchinson recalled.

Referring to her boss, he encouraged her to ‘talk to the chief about it’ because ‘he knows about it.’

Hutchinson testified that she went straight to Meadows and told him about her ‘interesting’ conversation with the disbarred attorney.

‘There’s a lot going on, Cass. I don’t know, things could get real, real bad on January 6th,’ she recalled Meadows saying.

She shared her own perspective, adding: ‘That evening was the first moment I remembered feeling scared and wondering what could happen on January 6.’

The 25-year-old has firsthand knowledge of conversations between Trump and his allies in the lead-up to the 2020 election and after it.

At the outset of the hearing, Vice Chair Liz Cheney said the panel would be ‘departing’ from its normal format to accommodate the ‘important and cross-cutting topics’ in Hutchinson’s wide-ranging testimony. 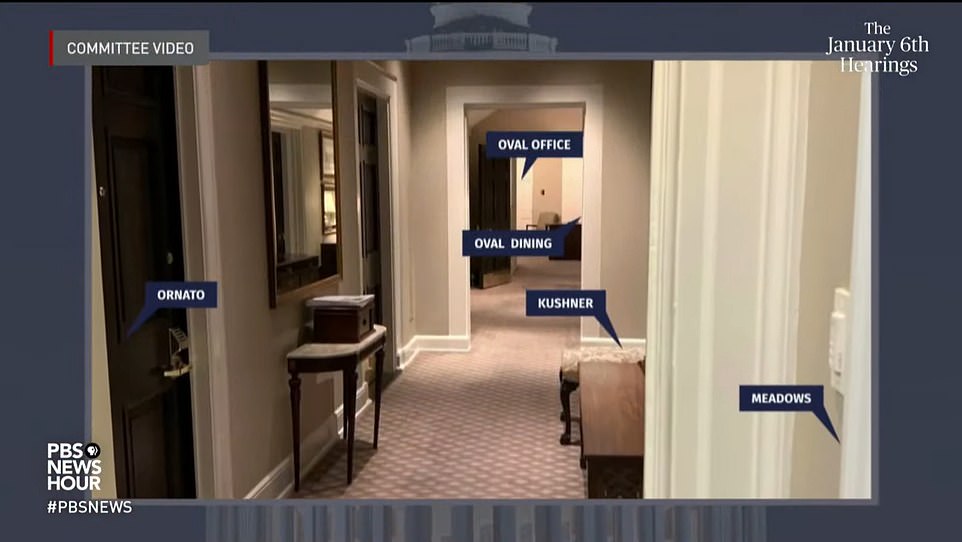 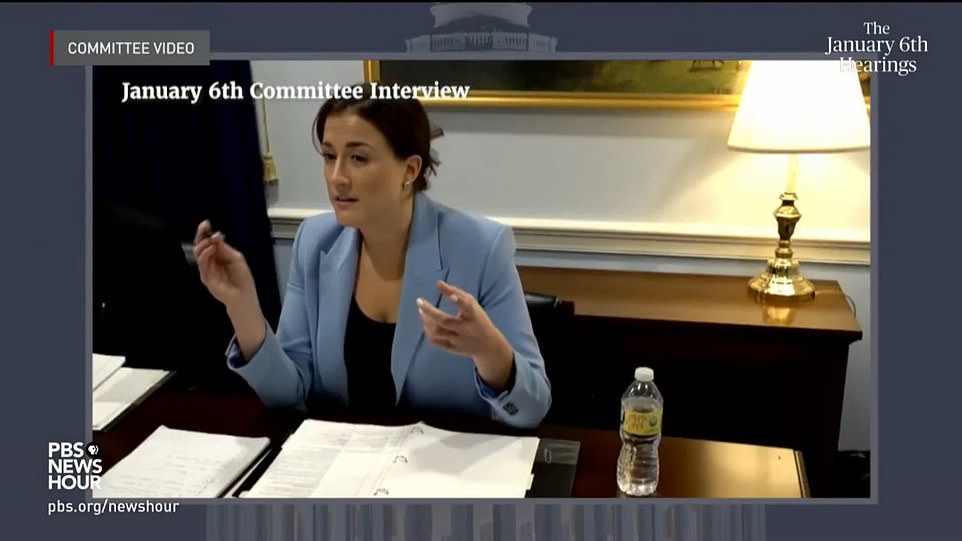 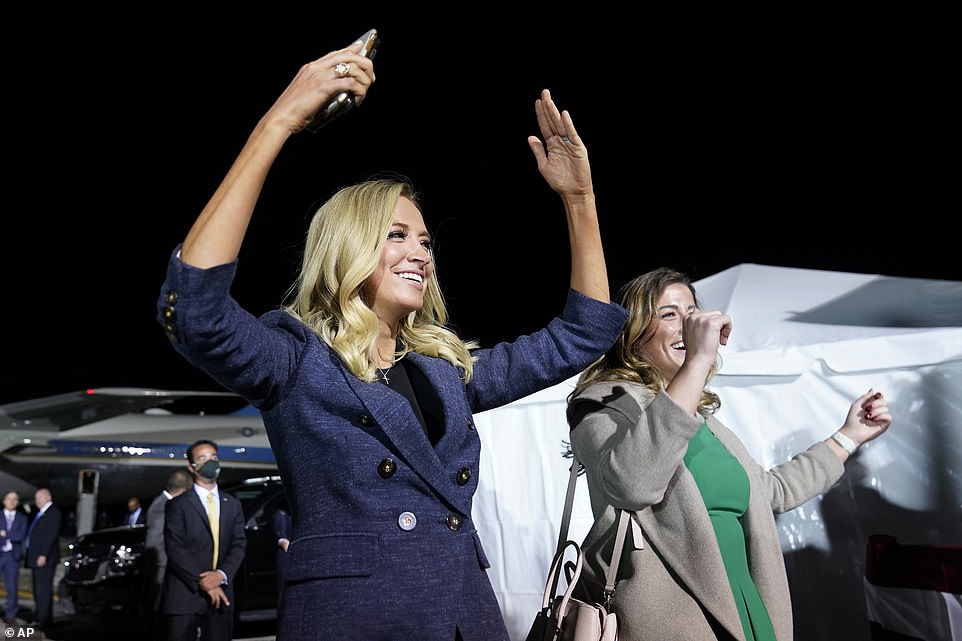 Thompson opened his line of questioning asking Hutchinson about her relatively short resume compared to other senior White House staffers, before displaying diagrams reflecting the physical proximity her office had to Trump in the Oval Office.

Tuesday’s hearing was revealed in an announcement roughly 24 hours before it was set to occur. The surprise event came after Thompson told reporters last week that his committee’s final two presentations would be delayed until July.

In an unusual move, the panel gave no additional details in its announcement but said it would ‘present recently obtained evidence and receive witness testimony.’

Hutchinson has been deposed by the committee at least three times behind closed doors for a combined nearly 20 hours.

She’s previously told lawmakers that Trump showed support for rioters in the US Capitol who were chanting ‘Hang Mike Pence’ and that she saw the president’s former chief of staff burn pages in his office after a meeting with GOP Rep. Scott Perry.

Hutchinson told lawmakers on Tuesday that she was ‘disgusted’ by Trump tweeting that Pence ‘lacked courage’ after the former vice president rejected his boss’s plot to overturn President Joe Biden’s electoral victory.

‘It was unpatriotic, un-American, and we were watching the Capitol being defaced because of a lie,’ Hutchinson testified.

Her boss, however, suggested Trump said he ‘deserves’ it, according to the aide’s testimony.

Hutchinson recalled a conversation between Cipollone and Meadows that day as rioters chanted for Pence to be hanged.

‘Mark we need to do something more. They’re literally calling for the VP to be f***ing hung,’ Cipollone said according to Hutchinson.

‘Mark had responded something to the effect of, “You heard him, Pat, he thinks Mike deserves it. He doesn’t think they’re doing anything wrong”.’

The January 6 committee is also looking into phone calls reportedly made among Trump’s adult children and his top aides discussing election strategy in September 2020, the Guardian reported on Tuesday.

The calls were made at a private event and were captured on video by British documentary filmmaker Alex Holder. Holder’s first-hand footage and interviews of Trump, his family and Vice President Mike Pence in the weeks leading up to the November presidential race have become a focal point for the committee as it hones in on Trump’s plan to undermine American democracy.

Lawmakers are focused on whether the former president and his children were involved in a plot to send in fake electors to upend Joe Biden’s Electoral College victory. The Justice Department has separately subpoenaed at least nine people linked to the scheme.