Meals on Wheel staff could get OAPs exercising

Meals on Wheels staff should be trained to help pensioners to exercise, experts say.

The UK Active organisation last night called for the creation of a ‘national activity therapy service’ – to train pharmacists, Meals and Wheels staff and care home workers to help elderly people get active.

But the authors say exercise is a ‘miracle cure’ which lengthens lives and keeps people feeling younger for longer.

Meals on Wheels staff should be trained to help pensioners to exercise, experts say (file photo)

With one in five Britons due to be aged over 65 by 2025 and social care currently costing the country £100billion a year, the authors warn that failure to promote regular physical activity among older adults could prove ‘catastrophic’.

The report authors say if each of the health professionals, volunteers and care workers making these visits spent a few minutes talking about exercise, it would be a very cheap way of improving pensioners’ health.

They say all carers and other staff should be trained to talk about the benefits of exercise, and to point people to local exercise classes and groups.

The report says if all pensioners met the guidelines it would save the NHS £12billion in treatment costs and prevent 600,000 major diseases such as heart disease, dementia, type two diabetes and cancer over the next decade. 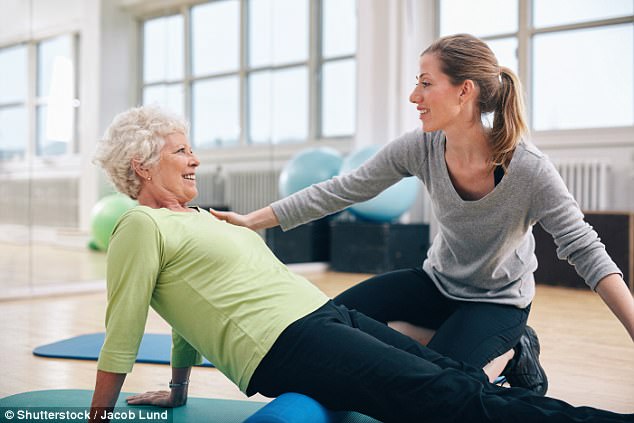 Report warns that over-65s are increasingly inactive, a problem which hastens declining physical and mental health. But the authors say exercise is a ‘miracle cure’ (file photo)

Steven Ward, chief executive of UK Active, said: ‘We need to make physical activity the natural choice from cradle to grave and that means putting exercise – the miracle cure – at the heart of our health and social care systems, especially for older adults.

‘This will enable husbands, wives, parents and grandparents to live later life in full colour, spending longer with their loved ones, while also largely negating the need for expensive health treatments associated with long-term conditions and subsequent social care.’

Professor Sir Muir Gray CBE, chief knowledge officer to the NHS, said: ‘There’s an answer to ageing and it’s called physical activity. By maintaining good fitness levels throughout our later years, we can protect ourselves against many of the diseases commonly associated with old age – such as heart disease, type two diabetes and dementia – to live ably and independently at home.’