RAPESEED could replace soy as a source of protein in vegan burgers and sausages as it’s more filling and has a savoury ‘mustard tang’, study claims

Vegans could soon be eating meat-free burgers made of rapeseed — a yellow crop with a mustard tang — rather than their typical soy fare, a study has proposed.

Researchers from Germany found that rapeseed, which is a member of the cabbage family, was just as nutritious as soy but left people feeling satiated for longer.

Its mustard flavour means that the plant is perfect for making savoury meat substitutes such as vegan and vegetarian burgers and sausages.

Vegans could soon be eating meat-free burgers made of rapeseed — a yellow crop with a mustard tang — rather than their typical soy-based fare, pictured, a study has proposed

‘Rapeseed protein, in contrast to soy protein, has a mustard flavour,’ said paper author and nutritionist Christin Volk of the Martin-Luther-University in Germany.

‘Therefore, rapeseed is more suitable for the production of savoury foods rather than sweet foods,’ he added.

Humans need protein for a balanced and healthy diet, with meat and fish examples of high-quality sources for such.

‘It contains essential amino acids which can not be synthesised in the body,’ added paper author and nutritionist Gabriele Stangl, also of the Martin-Luther-University.

‘Soy is generally considered the best source of plant protein as it contains a particularly beneficial composition of amino acids.’

In their study into the potential of rapeseed-based meat alternatives, the team found that the plant has just a beneficial composition of amino acids as soy does.

‘So far, only a few data on the effect of rapeseed protein intake in humans had been available,’ said Professor Stangl.

The team found that consuming rapeseed protein has similar beneficial effects for the human metabolism as soy protein — but its impact on glucose metabolism and satiety were even better. 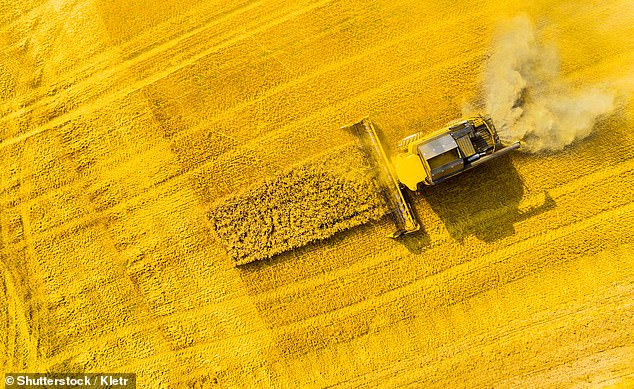 Researchers from Germany found that rapeseed, pictured being harvested, which is a member of the cabbage family, was just as nutritious as soy but left people feeling satiated for longer

Another advantage of rapeseed is that the crop is already being cultivated in Europe for its oil — and the protein-rich by-products of this process could easily be used for food, rather than the manufacture of animal feed as they are now.

In their study, the team recruited 20 participants to explore the effect of ingesting rapeseed and soy proteins on the human metabolism.

Each test document their diets for a few days prior to the experiment, during which they were invited — on three separate days — to eat specially prepared meals.

These comprised noodles with tomato sauce — which either contained no added protein, or an enrichment of either soy or rapeseed.

After each meal, the researchers took blood samples from the participants regularly over a six-hour period.

‘By using this study design, we were able to assess the acute metabolic response of each study participants to the dietary treatments,’ said Professor Stangl.

The researchers also reported that the study participants felt full up or satisfied for longer after eating the rapeseed protein than the soy-derived alternative.

‘Rapeseed even produced a slightly more beneficial insulin response in the body. To conclude, rapeseed appears to be a valuable alternative to soy in the human diet.‘

The full findings of the study were published in the journal Nutrients.

HOW DOES EATING MEAT AND DAIRY PRODUCTS HURT THE ENVIRONMENT

Cows, pigs and other farm animals release huge amounts of methane into the atmosphere. While there is less methane in the atmosphere than other greenhouse gases, it is around 25 times more effective than carbon dioxide at trapping heat.

Raising livestock also means converting forests into agricultural land, meaning CO2-absorbing trees are being cut down, further adding to climate change. More trees are cut down to convert land for crop growing, as around a third of all grain produced in the world is used to feed animals raised for human consumption.

As well as this, the nitrogen-based fertiliser used on crops adds to nitrous oxide emissions. Nitrous oxide is around 300 times more effective at trapping heat in the atmosphere. These fertilisers can also end up in rivers, further adding to pollution.

Overall, studies have shown that going vegetarian can reduce your carbon emissions from food by half. Going vegan can reduce this further still.