Mechanic, 26, pops the question to his girlfriend over a Greggs Festive Bake

A mechanic popped the question with ‘the most Geordie proposal ever’ after taking his new fiancee to Greggs.

Tony Brown went down on one knee in front of Rebecca English in Newcastle city centre, as the couple’s two children watched on.

And after Rebecca, 25, said yes, the couple celebrated by visiting the city’s nearest Greggs bakery, near the Fenwick department store.

Tony, 26, says the decision to go to Greggs was an impulsive idea as he was ‘hyper and starving’, and the pair enjoyed a Festive Bake.

Tony Brown went down on one knee in front of Rebecca English in Newcastle city centre, as the couple’s two children watched on 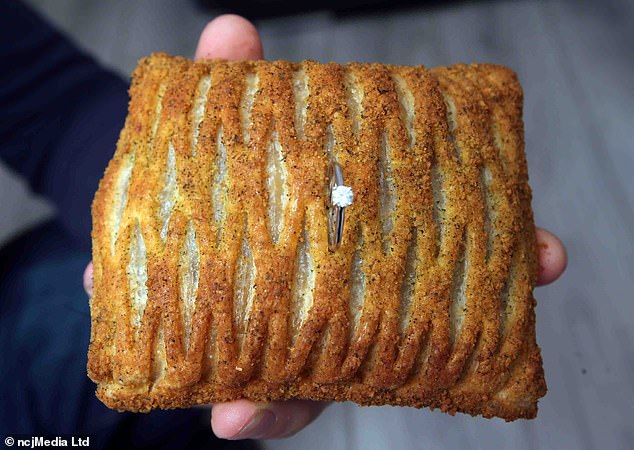 He added: ‘It had everything, Fenwicks, Greggs; unless Alan Shearer was there or something it couldn’t have got more Geordie.’

But he said he needed something to line his stomach after getting proposal butterflies and decided to go for a bake at Greggs.

‘I was hyper and I was starving, and when I turned around there it was – Greggs.’

But after plotting the perfect proposal for the last couple of years, he finally picked up the courage on a packed Northumberland Street last Wednesday.

As the family gazed at ‘The Snowman’ theme, Rebecca turned around and caught her partner on his knee.

‘Everyone was clapping and Daizy didn’t know what was going on – she thought they were clapping her!’ recalled Rebecca. 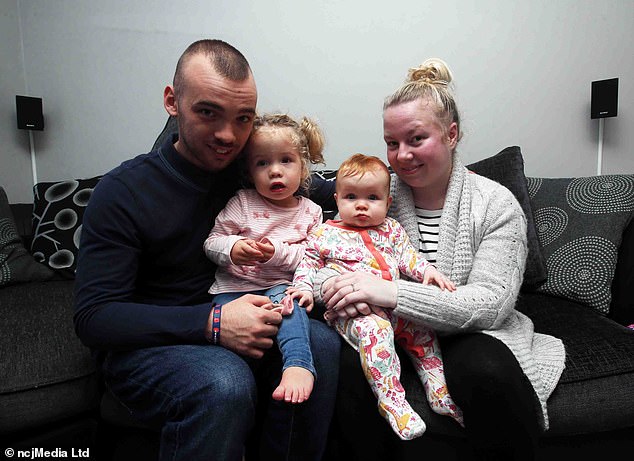 The couple, from Hebburn in South Tyneside, is pictured with their two daughters Daizy, left, and Molly

Pasty shenanigans included, she said it was the perfect proposal – although her other half only decided on the day.

‘We are going to Seaham Hall later this month, and he was planning on proposing there,’ she said.

‘I don’t know what exactly happened but he spoke to his barber that morning and he just suddenly decided today was the day.

‘And the festive bake was totally typical of him – but I was expecting more than a Greggs afterwards, put it that way.’

However, while Tony claims he was just hungry, Rebecca believes the pastry-proposal may have been influenced by a rather controversial marketing move.

Greggs has been accused of hijacking the iconic window this year by displaying their sign backwards – so anybody looking at the winter scene can read its name.

Tony’s mother, Leigh, contacted the radio show to break the news and now the Hebburn couple, who met through mutual friends, are planning a wedding. 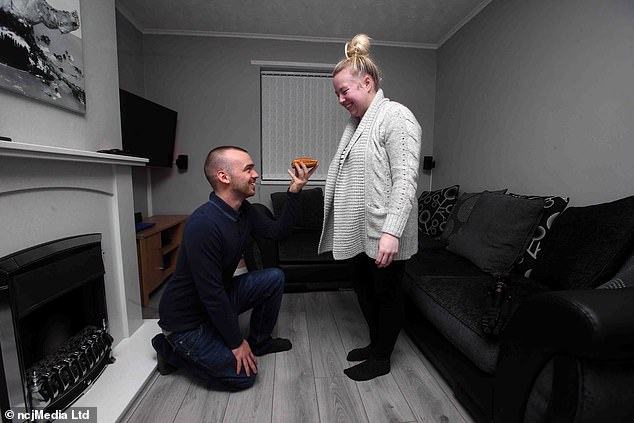 Tony, 26, says the decision to go to Greggs was an impulsive idea as he was ‘hyper and starving’