Medic, 21, has joints which dislocate every day and has to be fed through a tube

A medic with a rare genetic condition has to cope with her joints dislocating every day and be fed through a tube because her digestive system doesn’t work.

Amy Fisher, from Manchester and living in Perth, Australia, has Ehlers-Danlos syndrome which affects the connective tissue in joints and organs.

The phlebotomist – someone trained to take blood – was always told her joint problems were growing pains until she grew older and they continued to hurt.

She now has to wear various braces to hold her limbs in place, relies on a wheelchair when she has flare-ups, and has a host of other problems with her digestive system.

Among those is gastroparesis, which paralyses the stomach and prevents her from being able to digest normal food and sometimes even her own bile.

Although Miss Fisher says her illness is ‘isolating’ she finds friends in support groups online and among her 33,000 Instagram followers.

Amy Fisher, from Manchester, has Ehlers-Danlos syndrome which affects the connective tissue in her joints and organs which causes her limbs to dislocate regularly

Miss Fisher was diagnosed with the rare genetic condition, Ehlers-Danlos syndrome (EDS), when she was 19 after her symptoms progressively got worse.

After dismissing her ‘growing pains’ throughout her teens, she found her joints felt increasingly loose after exercise and she would injure easily.

By the time she was 17 the problem had become unbearable and she was first admitted to hospital.

Now, she has to have regular visits to doctors and has already been admitted to hospital 12 times this year for treatment.

‘When I look back I had symptoms from being very young,’ she said.

‘I would get a lot of joint pain and I was always told it was just ‘growing pains’ until one day I got too old for it to be growing pains and things gradually got worse.

‘It wasn’t until around 17 that things started to rapidly decline and I was admitted to the hospital with various issues that I later found out were related to EDS.

‘In daily life I have difficulty walking and I have to use ankle braces, finger splints, wrist and thumb braces, knee braces, and hip braces to hold my joints in place or to prevent them from dislocating. 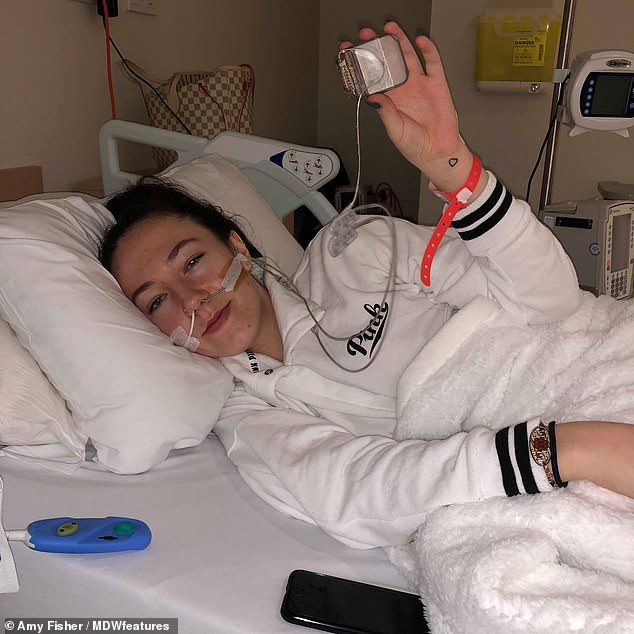 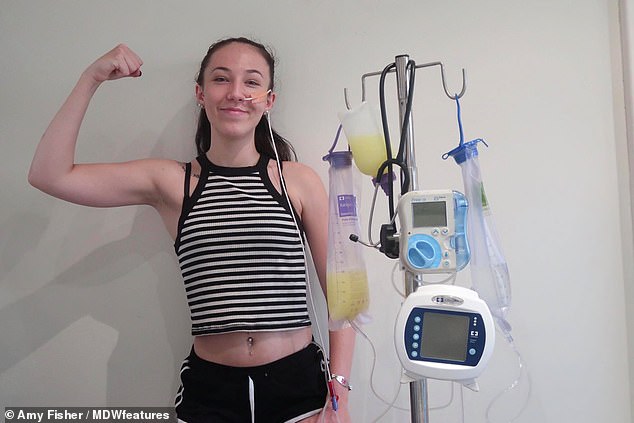 Miss Fisher has various illnesses as well as Ehlers-Danlos syndreome, including gastroparesis which paralyses the stomach and mast cell activation disorder, which can cause the immune system to attack the body with allergic reactions

‘I use a wheelchair on bad days and have fatigue, heart palpitations, dizziness, fainting, nausea and urinary incontinence or retention, which is why I self-catheterise when I go to the toilet.’

As well as her crippling EDS, Miss Fisher also has various problems with her digestive system including a gastroparesis, which paralyses the stomach.

She also has mast cell activation disorder (MCAD) which can cause the immune system to suddenly attack the body. 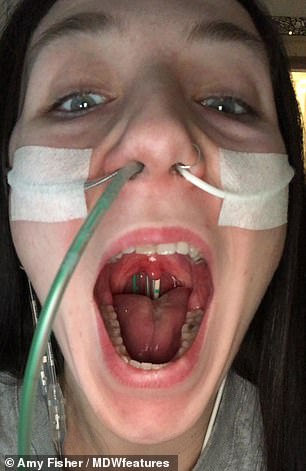 EDS makes Miss Fisher feel isolated from society but she has met some of her closest friends through the condition via online support groups and her Instagram profile, @chronically.ams.

She said: ‘I am connected to a feeding tube 24/7 and to drainage tubes when I can’t digest my own bile.

‘MCAD causes unexpected and random allergic reactions, even to things I’ve been exposed to a thousand times before. I always carry rescue medications, inhalers and epi-pens where ever I go.

‘Mentally I struggle a lot, but I have an amazing support system. Being physically ill puts a lot of strain on you mentally and some days are really rough.

‘However, I do my best to look on the brighter side of things because I know for every bad day I have there will be another good day.

‘I also know that this isn’t forever, and I have big plans for my future.

‘Even if it takes me a little longer to reach my goals, I’m determined to live my life to the fullest no matter how much my physical heath holds me back.’

There is no specific treatment for EDS but with support and advice, symptoms are usually manageable.

Miss Fisher keeps her EDS under control with weekly doctors’ appointments and hospital appointments every fortnight. 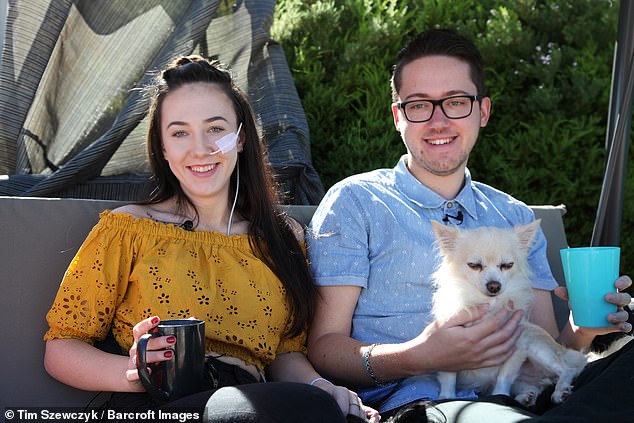 Miss Fisher, pictured with her partner Tom, says being so ill can be isolating but the biggest help for her is all the support she gets from her friends and family 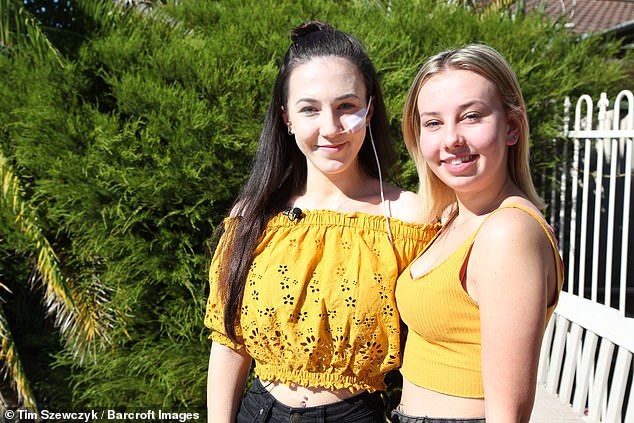 Pictured with her sister, Ellie, Miss Fisher has been seriously ill since she was 17 years old after thinking she just had ‘growing pains’ during her early teens

‘If I could take one condition away it would be digestive tract paralysis and gastroparesis,’ Miss Fisher added.

‘I miss food so much it’s just not the same and until it’s gone I don’t think people realise how much of a role food plays in our lives.

It is believed to be caused due to damage to nerves which control stomach muscles.

‘Not just to fuel our body with nutrition but it’s such a social event and activity.

‘Sometimes having EDS makes me feel so alone and isolated, sometimes I feel like I’m trapped inside someone else’s body and I’ll wake up one day and be me again.

‘It’s hard, but at the same time I’ve met so many amazing people and some of my best friends who all suffer with EDS I met most of them online and through support groups.

‘Although this illness is probably the hardest thing I’ve ever had to deal with, I don’t think I would change a thing because if I hadn’t had EDS I wouldn’t be who I am today.

Despite being ill, Miss Fisher says she manages to stay positive even in her darkest days and shared her words of advice to other sufferers.

‘Staying positive is something that no matter the situation or how I’m feeling I always try and see the light or the positive to the negative,’ Miss Fisher said.

‘No matter how glum or dark a situation there is always a positive, you just have to look hard enough to find it.

‘One of the biggest things that helps me stay positive is my huge support system, so that includes my family, partner, friends and of course my Instagram and YouTube family.

‘The support I receive online from my second family, that’s what I refer to them as, is always so overwhelming and they inspire me every day to keep on fighting and find the good in the bad.

‘If I had to give advice to myself back when things started to get bad for me or someone else in the same situation, I would say no matter how bad it gets I promise you it gets better and there’s always another way around. 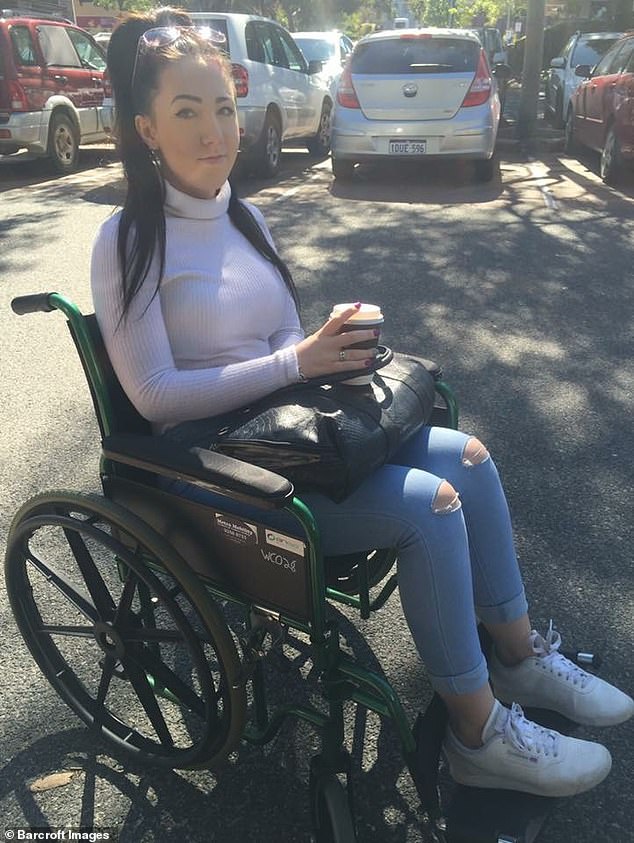 Miss Fisher relies on a wheelchair to get around when she has flare-ups or particularly bad days, because EDS makes her limbs painful and prone to dislocating 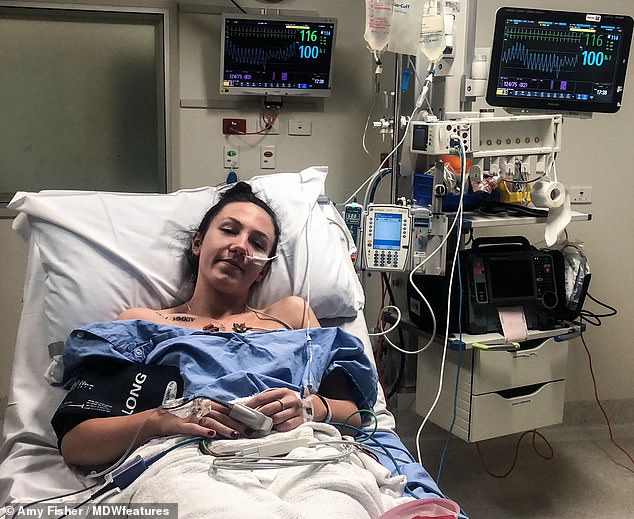 Miss Fisher had to give up on her dream of becoming a paramedic when she became so ill, but says she still has ‘big dreams’ for the future and is committed to finding a way around her problems

‘I found myself in a very bad place, I thought all my dreams were crushed I thought I could never achieve my goals, that this illness had taken everything from me.

‘But I stayed positive and kept on pushing. Although I couldn’t be a paramedic – my dream job – and although I had to drop out of university, I found another way.

‘I found another pathway that I still enjoyed what I could physically do and that I was still in the medical field.

‘Although I can’t play basketball anymore or really do any sport at all, I find enjoyment in going to the games and watching my favourite team play.

‘I just needed a reminder and maybe that’s all anyone needs, is reassurance, to know that they’re not alone and there’s always another path, your goals are reachable. I promise.’