Medical student looks at his own SPERM under a microscope

A medical student looked at his own sperm under a microscope and filmed the fascinating close-ups on his iPhone.

Martin Kristiansen shot the footage of his semen, magnified up to 1,000 times, to give an insight into the world of reproductive cells.

His recording, made in the comfort of his home, shows thousands of the tiny cells darting back and forth full of life.

The biomedicine student at Aalborg University in Denmark was shocked to see just how lively his semen was.

Martin Kristiansen shot footage of his semen up close, back in September, to give an insight into the world of reproductive cells

He told MailOnline: ‘When I first looked at the sample I was blown away by the enormous amount of cells, and how lively they were.

‘I actually had to dilute the sample a bit to be able to see the individual cells and not just a big blur of moving cells. I knew what the sample should look like, but it was an entirely different thing to see it for myself.’

Mr Kristiansen posted the video on his YouTube channel, My Microscopic World, alongside a series of similar videos showing wonders of micoorganisms in our every day life.

The magnified reproductive cells underneath the microscope, highlighted in Mr Kristiansen’s video, give an insight into sperm’s quest.

Sperm cells are streamlined for maximum speed and efficiency, tasked only to fertilise an egg.

They are competitive in their mission, but in the end, only around 15 out of a 55million sperm count that set out to fertilise the egg are able to make it through the reproductive tract in the female.

Researchers at York University found in March that healthy sperm have better capabilities due to a reinforced outer-layer which coats their tails.

It gives them the strength to make the powerful rhythmic strokes needed to break through the cervical mucus barrier. 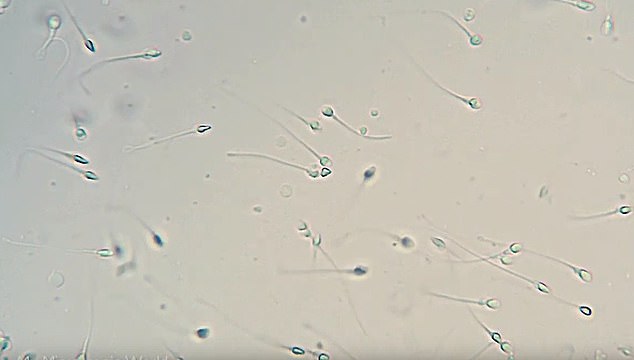 There are millions of sperm, medically called spermatozoa, in the semen, the white or grey liquid that is ejaculated from the penis.

But there is a large variation in men’s sperm count, due to factors such as stress, obesity, drug and alcohol use – and exposure to high levels of pollution, according to emerging evidence.

A healthy, normal sperm count will have a concentration of at least 20million sperm per ml of semen, according to The World Health Organisation.

At least 25 per cent should be swimming with rapid movement, and a further 50 per cent be moving, even if slowly.

A low sperm count, also called oligozoospermia, is where a man has fewer than 15 million sperm per millilitre of semen, which could affect fertility.

Lifestyle changes can improve a man’s chances of becoming a father, and the NHS recommends keeping active, keeping the testicles cool, and reducing stress, drugs and alcohol intake.

HOW DO SPERM MOVE?

Sperm are vital in human reproduction and the motility of the male cells is crucial.

In order to help the sperm cells move, they evolved a ‘tail’ which is called  a flagellum.

Sperms’ tails play a critical role in their ability to swim and consequently fertilise an egg.

Sperm are vital in human reproduction and the motility of the male cells is crucial. Sperms’ tails play a critical role in their ability to swim and consequently fertilise an egg

Sperm tails consist of around 1,000 building blocks, including structures known as tubulins, which form long tubes.

Attached to these tubes are moving molecules called motorproteins.

These pull and bend sperm tails, enabling them to swim.

The movement of the tail is powered by a mitochondria, the powerhouse of a cell, which produces energy.