A doctor has warned parents against the potentially fatal effects of a craze involving small magnetic balls, which has left at least four children needing surgery.

The trend involves youngsters placing the balls inside their mouth to mimic face piercings, with many unaware of the risks they could face if they are swallowed.

A Stockport doctor has written a letter which has been circulated to primary schools in the area, urging parents not to buy the balls for their children.

A doctor has warned against the dangers of youngsters accidentally swallowing magnetic balls and cited the case of Libbie Walker, 6, pictured, who suffered a perforated bowel

It warns parents that if the ‘highly magnetic’ balls are swallowed they can cause ‘severe damage’ to the digestive system and bowel.

At least four children in the Stockport area needed abdominal surgery after swallowing the magnets, which have already been made illegal in some countries.

In 2019, a six-year-old girl suffered a perforated bowel after she accidentally swallowed a magnetic ball bearing.

Libbie Walker needed major surgery and was left with a seven-inch scar, which runs from her belly button to her hip. 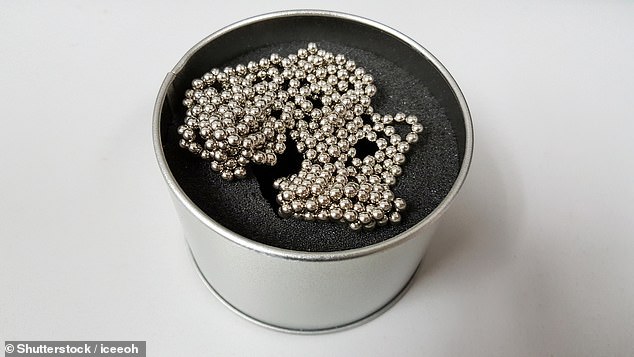 In the letter, the doctor stated: ‘I would like to highlight the dangers of these highly magnetic balls.

‘These very small (usually 3 to 5mm) balls are widely available to buy in the UK and are sold as a ‘creative toy.’

‘I cannot emphasise how dangerous these can be if swallowed. These balls have already been banned in other countries because of their risk to children.

‘You may wonder why a child would swallow these or you may think ‘my child wouldn’t swallow them’, but I plead with you to not take the risk.

‘Apparently, some children have been creating a larger ball using numerous balls and putting them in their mouth, then placing other balls on the outside of their face.

‘They then use their tongue to move the larger ball in their mouth to make the balls on their face move, which understandably kids find amusing.

‘However, some of the individual balls in their mouth can come away and be accidentally swallowed.

‘The balls are highly magnetic and can cause severe damage to the digestive tract. 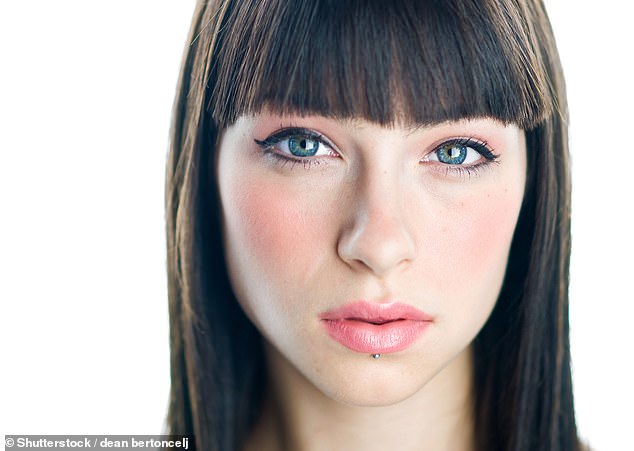 Youngsters are holding magnetic balls in their mouths, before placing balls on the outside of their face to make it seem like they have a facial piercing (file pic)

‘As the balls move through the bowel, they can magnetise together even when in different parts of the bowel.

‘The pressure applied to the bowel tissue lying between the two magnets is so strong that it causes a perforation in the bowel.’

In 2018, a 12-year-old boy had to have part of his bowel removed after swallowing one of the magnetic balls.

Freddie Webster, was taken to Hull Royal Infirmary, after a 3mm ball ripped a hole in the wall of his stomach.

The doctor added: ‘This is extremely serious and can be fatal if not identified and promptly fixed by abdominal surgery.

‘There has been a case locally in which a young child needed abdominal surgery and within Stockport, I am aware of at least another three cases.

‘Please do not buy these for your children and if you already have them consider removing them.’

Magnets have become a craze among kids who use them as pretend piercings, but don’t think of the dangers.

They put them in their noses, and even in their eyelids. Some put them inside their mouth and put the corresponding magnet outside it.

The magnets continue to work even inside the body, because the force that draws them together is not disrupted by the thin, porous tissue in the body.

Obviously, this can cause problems. Organ is soft and can be easily torn by the magnetic force of the bearings.

This sort of damage can quickly lead to internal bleeding and sepsis, and can easily be fatal if not treated quickly and the source of the damage removed.