Prince Philip could face weeks more in hospital after being transferred to an NHS trust for a pre-existing heart condition, medics warned today.

Buckingham Palace revealed The Duke of Edinburgh had been moved from the private King Edward VII Hospital to St Bartholomew’s – commonly known as Barts – this morning for ‘testing and observation’ for an undisclosed, underlying heart issue.

The Prince, 99, had spent two weeks at the private facility with a mystery infection, having initially been admitted for a ‘few days’ on February 16 after feeling unwell. His infection is not related to coronavirus and it’s not clear whether it is linked to his heart condition.

NHS cardiologist Dr Aseem Malhotra told MailOnline the Prince could be in hospital for ‘four to six weeks’ and given intravenous antibiotics if it transpires that he has a heart infection.

But Dr Malhotra added: ‘It’s more likely he had an infection elsewhere – it could’ve been in the urinary tract or a chest infection – and the stress on his body put strain on his heart.

‘Therefore he had to be taken to a specialist cardiac centre to make sure heart is functioning while he is treated for the infection. What makes it more likely is his underlying heart issues.’

Buckingham Palace suggested the Duke could be discharged by the end of the week and insiders said it was ‘good news’ he’d been moved to a second hospital.

Despite enjoying an active lifestyle and carrying out Royal engagements until 2017, Prince Philip has suffered with an undisclosed heart condition for 30 years, which was only made public in 2007.

The Duke – patron of the British Heart Foundation – also had a stent inserted during surgery for a blocked artery in 2011 after experiencing chest pains. The following year he developed a urinary infection and in 2013 he underwent abdominal surgery for an undisclosed condition.

More recently, he was admitted for an infection ‘arising from a pre-existing condition’ in June 2018 and again in December 2019 due to complications from an underlying problem.

Dr Malhotra told MailOnline it was ‘difficult to draw conclusions’ about the Prince’s current condition with the ‘limited information’.

Prince Philip (pictured last July) could face weeks more in hospital after being transferred to an NHS trust for a pre-existing heart condition, medics warned today 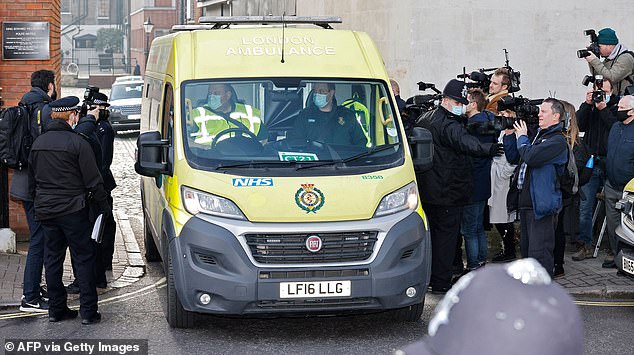 The Duke of Edinburgh was today moved from the private King Edward VII Hospital to St Bartholomew’s – commonly known as Barts – for ‘testing and observation’ for an undisclosed, underlying heart issue (pictured being transferred) 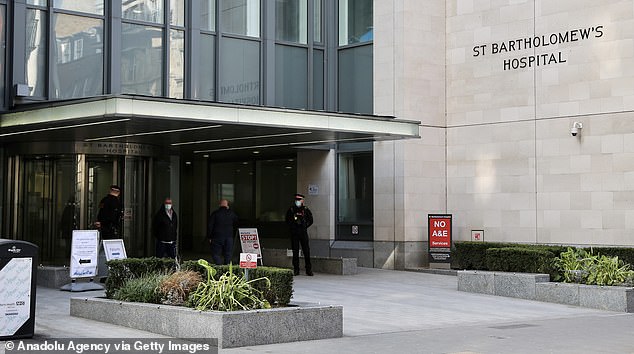 From a blocked coronary artery to a urinary infection, Prince Philip’s ailments in past 10 years

Prince Philip has enjoyed excellent health for a 99-year-old and still enjoys an active lifestyle. But in recent years he has struggled a little more with illness, suffering from a number of ailments over the past decade, including:

Dr Malhotra added: ‘This is all speculation, it’s difficult to draw conclusions with the limited information.

‘He’s far healthier than the average person of his age and is clearly a very robust and resilient man. I wish him very well and hope he gets better soon.’

Barts describes itself as an ‘internationally renowned hospital’ and a ‘centre of excellence for both cardiac and cancer care’, located in the City of London near St Paul’s Cathedral.

The site includes Europe’s largest specialised cardiovascular service at Barts Health Centre, while Barts Cancer Centre has a ‘global reputation for treating common and rare cancers’, according to the hospital. The clinic offers both private and NHS treatment.

The NHS said the centre aspires to perform more heart surgery, MRI and CT scans than any other service in the world.

A specialist heart attack centre delivers emergency care 24 hours a day, with rapid access to a team with specialist expertise and equipment.

In January 2020 the service was rated number one for cardiac arrest survival rates in London, the NHS said, and the hospital will celebrate its 900th birthday in 2023

A Buckingham Palace spokesman said today: ‘The Duke of Edinburgh was today transferred from King Edward VII’s Hospital to St Bartholomew’s Hospital where doctors will continue to treat him for an infection, as well as undertake testing and observation for a pre-existing heart condition.

‘The Duke remains comfortable and is responding to treatment but is expected to remain in hospital until at least the end of the week.’

Shortly after 11am today, a patient was taken away from King Edward VII Hospital in an ambulance, but umbrellas screened them from press and broadcast cameras as they were leaving the hospital and entering an ambulance.

A marked police van blocked the side street at the the exclusive private hospital on Beaumont Street in Marylebone, and there was also a police presence ensuring the road was clear.

Uniformed officers also stood along the street beside the hospital to keep traffic and passers by moving. At a rear entrance, umbrellas were used to shield the gap between the hospital and the NHS ambulance.

While Buckingham Palace has not officially confirmed whether the ambulance was for the Duke, ITV royal correspondent Chris Ship tweeted: ‘We can only imagine – although we don’t know – this was for Prince Philip.’

The Duke was admitted to King Edward VII Hospital last month as a precautionary measure after feeling unwell and walked in unaided. Buckingham Palace said last Wednesday he was ‘comfortable’ and responding to treatment.

Both Philip and the Queen have received Covid-19 vaccinations and his infection is not related to coronavirus. On February 20, Prince Charles made a 200-mile round trip from his Highgrove home in Gloucestershire to see him.

The Queen’s former press secretary Dickie Arbiter previously said Philip was likely to have ‘requested’ his eldest son’s presence to discuss the future of the Royal Family, given recent developments with the Duke and Duchess of Sussex confirming they would not be returning as senior royals.

The Duke, who is three months away from his 100th birthday, has also spoken to other members of the Royal Family on the phone. The Queen has remained at Windsor Castle where Philip had previously been staying.

Last Tuesday, the Earl of Wessex said Philip was ‘a lot better’ when it was announced the Duke would spend several more days in hospital being treated for the infection.

Prince Edward told Sky News: ‘He’s a lot better, thank you very much indeed, and he’s looking forward to getting out, which is the most positive thing, so we keep our fingers crossed.’

Here is the timeline of the Duke of Edinburgh’s stay in hospital since his admission two weeks ago: