A lead actor in a medieval re-enactment society used performances as a front for molesting women, a court heard.

Trevor Pilling, 78, of Chesham, Buckinghamshire, allegedly used his costume cloak to wrap himself around women and then grope them.

The pensioner, described as the driving force behind the Lion Rampant Medieval Display Society, is accused of preying on vulnerable women while a member of the Buckinghamshire-based re-enactment society during rehearsals, in hotels and even in their own homes.

He is accused of a dozen sexual assaults on eight women over a period of 25 years.

While a member of the Buckinghamshire-based Lion Rampant Medieval Display Society, Trevor Pilling, 78 (pictured outside Aylesbury Crown Court), allegedly used his costume cloak to wrap himself around women and then grope them

Kim Preston, prosecuting, said that Pilling had been regarded as a ‘pillar of the community’ until his secret persona was exposed when some of the victims decided to speak up.

The jury heard that on one occasion during a pantomime rehearsal, Pilling stood behind one woman and groped her breasts.

Ms Preston said the victim was left frozen and shocked by the defendant, a man she had come to respect.

The jury was told that Pilling ‘encircled’ women with his large medieval cloak during medieval re-enactments so he could cup their breasts and then carried on as if nothing had happened.

‘It is something he later did quite regularly and it had even been known as “encircling”,’ said Ms Preston.

She told the court that Pilling had created such a reputation by the mid-1990s that other women had warned each other not to be left alone with him or be encircled by his cloak.

The jury also heard that one of the assaults involved him performing oral sex on a teenage girl in an empty hotel lounge.

Ms Preston suggested to the jury the victim was ‘no doubt shocked’ and ‘frozen’ by Pilling’s sexual advances.

She said that the defendant sat up and kissed her and took her by the hand to get her to perform a sex act on him.

Ms Preston said that Pilling had been a ‘significant member’ of The Lion Rampant Medieval Display Society.

‘The defendant was a man that was held in quite high regard in his community.

‘He was much-respected by those he met – and those involved – as being a leading light in that society. He used his position and used that charismatic trusted role, in different ways on a number of different women over the years.

‘He took advantage of the circumstances to take advantage of particular types of women – particularly those that were in a vulnerable part of their life, or physically vulnerable,’ added the prosecutor.

Another alleged victim, who was aged in her 20s at the time, claimed she stayed over at his house one weekend, only to wake up one morning to see Pilling standing at the end of her bed wearing just his dressing gown.

Ms Preston said: ‘He laid himself down alongside her. His body was extremely close to hers and then he started to rub himself up against her, facing her. She said, “What are you doing?”. The defendant simply got up and left.’

And on one occasion, he placed his hand on the back of a woman who had recently had an operation and told her he had ‘healing hands’ and that he could see a shadow on her back. 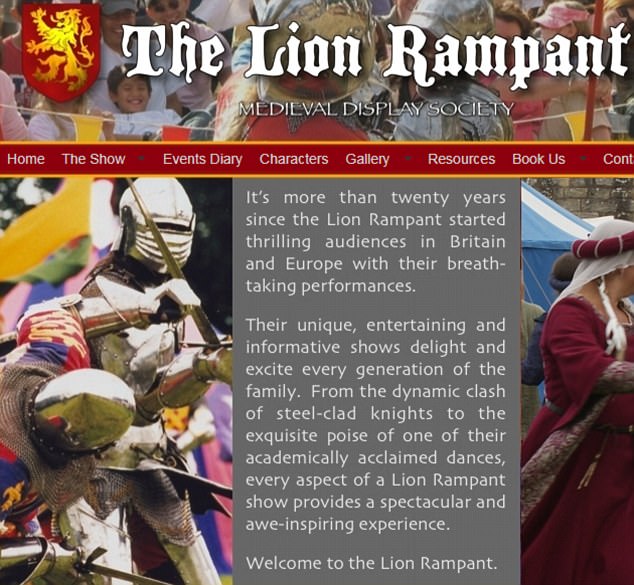 A promotional picture of the Lion Rampant Medieval Display Society. (There is no suggestion that anyone pictured is involved in the Tilling case)

Ms Preston said the victim thought it was preposterous and silly and declined the offer.

‘On another occasion, he slid his hand down on her back and bottom and pinched her buttocks,’ said the prosecutor.

‘She said he was crossing a line she didn’t want him to cross and she felt uncomfortable. She was lacking in confidence of speaking out against him, but she moved away and gave him a rather wide berth.’

It was claimed Pilling would also carry out ‘crystal healing treatments’ at his house – while his wife was present – on women in order to sexually assault them.

The court heard that one of the victims telephoned Pilling to berate him about his ‘squalid’ and ‘opportunistic’ behaviour – telling him, ‘if you ever touch me again there will be consequences’.

Pilling’s daughter was so sickened by her father’s behaviour that when the women told her of his crimes, she reported him to the police, the court heard.

When interviewed by officers, Pilling said, in a prepared statement, that the accusations were untrue but refused to answer any other questions.

‘These offences spanning a 25-year period from the early 1980s to 2007 show this defendant as a sexual menace,’ said Ms Preston.

‘He has been indecently assaulting both young and older women, as well as women he has come into contact with. Then with these treatments – I don’t want to call them bogus as he might have spiritual talents – with women aged in their 40s, 50s and even approaching their 60s.’

Pilling, of Chesham, Buckinghamshire, denies a total of 12 counts of indecent and sexual assaults on eight women between 1982 and 2007.

The trial, which is expected to last three weeks, continues.