Rapper Meek Mill has split with his girlfriend Milan Harris.

The news comes days after Kanye West revealed the 33-year-old rapper, real name Robert Rihmeek Williams, had met with his wife Kim Kardashian West, and that Kanye had been ‘trying to get a divorce’ from her ever since.

Meek and fashion designer Milan welcomed a baby boy on May 7 this year, which also happened to be Meek’s birthday, and he played down any signs of tension when tweeting about the split on Sunday.

End of the road: Meek Mill splits with girlfriend Milan Harris (pictured above in January) days after Kanye West got upset over rapper’s hotel meeting with Kim Kardashian

The rapper tweeted: ‘We me and Milano decided to remain friends and build our child as separate parents … we still have mad love for each other but we both came to a understanding! – meek.’

Meek had got himself caught up in Kanye’s controversial twitter outbursts earlier this week, which Kanye, 43, has since apologized for.

However, Meek also caused controversy this week by posting a shady comment under ex his Nicki Minaj’s Instagram post announcing her pregnancy news. Nicki and Meek split in 2017 after two years of dating.

Meek posted a series of ‘no words’ emojis and laughing faces under one of Nicki’s baby snaps, which reportedly caused the rapper to turn the comments off the post. 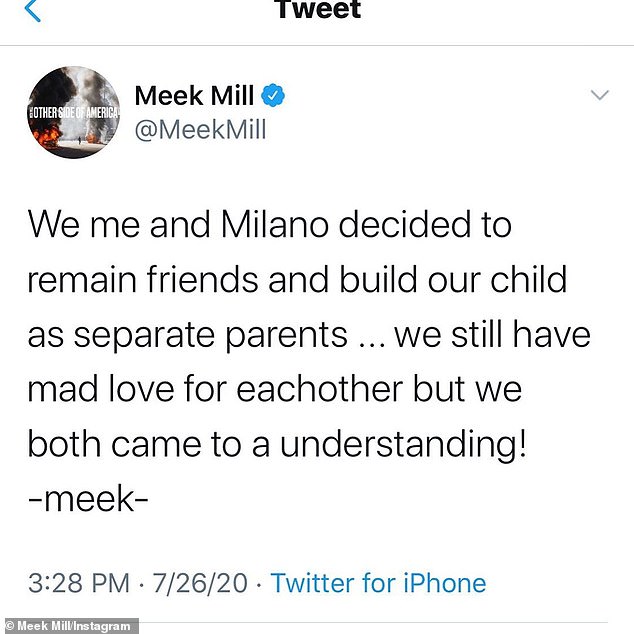 Split: Rapper Meek took to Twitter on Sunday to reveal the news

Meanwhile, Kanye – who suffers from bipolar disorder – tweeted on Saturday: ‘I would like to apologize to my wife Kim for going public with something that was a private matter.

‘I did not cover her like she has covered me. To Kim I want to say I know I hurt you. Please forgive me. Thank you for always being there for me.’

However, Kanye had earlier claimed that he’d been ‘trying to get divorced’ from Kim ever since her alleged meet-up with Meek at the Waldorf in Beverly Hills, suggesting something untoward took place and she was ‘out of line’.

But in a photo of the 2018 event revealed last week, it clearly shows Kim, 39, and Meek meeting in a professional capacity. 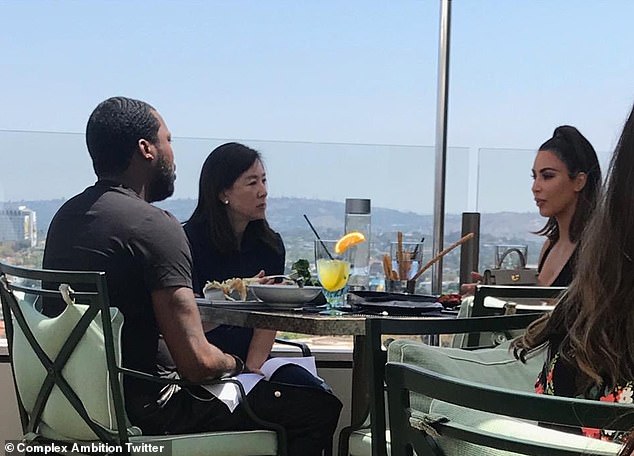 Pictured: A picture of Kim Kardashian meeting with rapper Meek Mill to discuss prison reform back in 2018 at a hotel in Los Angeles has emerged via Twitter on Thursday

The duo are joined by philanthropist Clara Wu at a rooftop restaurant, where they are believed to have discussed prison reform.

Mill was clear in his denial that nothing untoward happened between himself and Kim, writing earlier this week: ‘Sh** is cappp cmon’, which is slang for lies.

After the photo emerged, the rapper took to his Twitter account on Thursday to tweet: ‘Being around the wrong environment and wrong people will make you forget your worth! Stay focused.’ 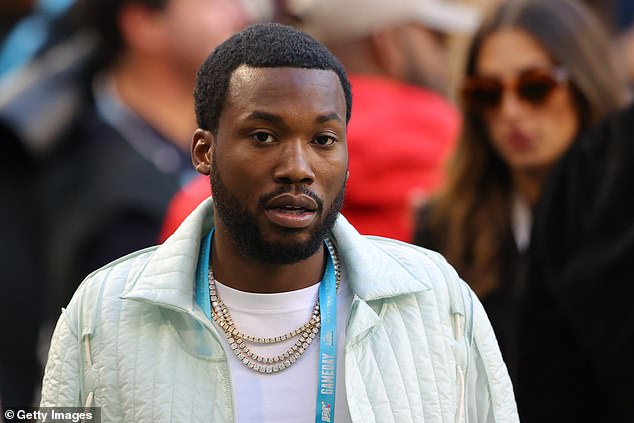 Denial: Mill was clear in his denial that nothing untoward happened between himself and Kim, writing earlier this week: ‘Sh** is cappp cmon’, which is slang for lies (pictured in February)

Kim earned glowing praise from Mill last year, when the rapper called her a ‘friend’ and hailed her for ‘doing a lot of good work’ on prison reform.

On Tuesday, in a string of now-deleted shocking tweets, Kanye claimed: ‘I’ve been trying to get divorced since Kim met with Meek at the Warldolf for ‘prison reform.’

He added: ‘Meek is my man and was respectful That’s my dog Kim was out of line I’m worth 5 billion dollars and more than that through Christ But ya’ll ain’t listen to MJ and now ya’ll believe them???’ 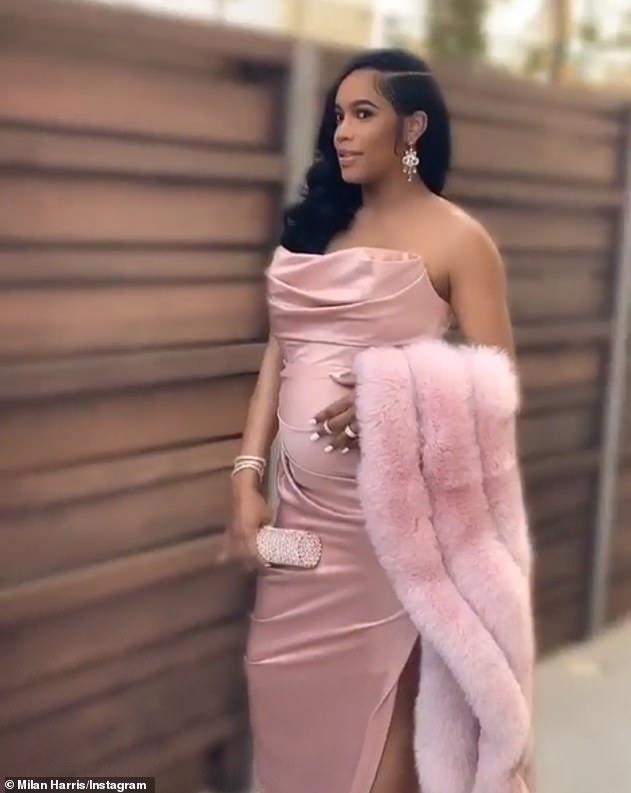 However, he later deleted the tweets and his wife Kim has been supporting him through his struggle with bipolar disorder, she said earlier this week in a statement that ‘his words sometimes do not align with his intentions’.

Sharing three pages to her Instagram story on Wednesday morning, Kim said: ‘Those that understand mental illness or even compulsive behavior know that the family is powerless unless the member is a minor.’

She continued to her 180 million followers: ‘I understand Kanye is subject to criticism because he is a public figure and his actions at times can cause strong opinions and emotions.

‘Those who are close with Kanye know his heart and understand his words some times do not align with his intentions.