A young cricket fan has been dubbed the ‘flossing king’ after repeatedly doing the wildly popular internet dance.

During Fox Sports’ broadcast of the derby, the camera kept cutting to the young man, who was doing the ‘floss’ every time.

Cricket Australia also noticed the young fan, well, sharing a clip of his dance to their social media with the caption: ‘When it’s Christmas Eve and your @BBL team is about to win.’

With the camera locked in on the young man, coming back to him after multiple ad breaks to catch him doing the dance.

Clad in his Sydney Thunder gear and a Santa hat, the child moves his arms to either side of his body and thrusts his hips against them – as popularised in the video game Fortnite.

The dance is becoming commonplace in sports across Australia, with the AFL, cricket and soccer encouraging young fans to dance on camera during breaks in play. 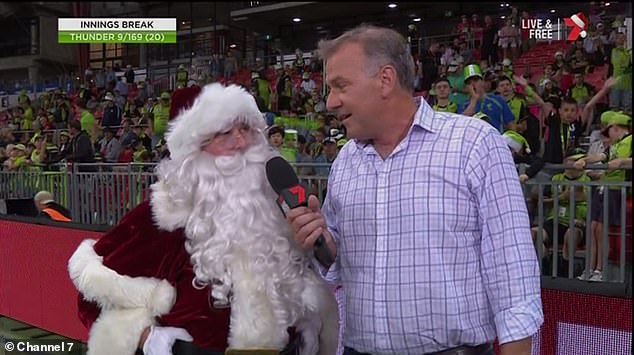 Carol singers lauded the ‘furiously’ dancing child, imploring organisers to get him on stage

The young cricket fan wasn’t the only one breaking out the dance moves on national television Monday night, with a child breaking the internet with his moves at Melbourne’s Carols by Candlelight.

Dressed as a Christmas tree, the child flossed to Darlene Love’s Christmas (Baby Please Come Home), with carolers taking to Twitter to laud the young man.

‘Shoutout to that kid FURIOUSLY flossing while wearing a shristmas (sic) tree costume,’ one fan wrote.

‘That flossing Christmas tree child is the best thing we’ll see all night. Chuck him on stage.’