Meet the tallest and smallest horses in the world.

Big Jake towers at 6ft 9in and was crowned the tallest horse in the world by the Guinness World Records in 2012.

While Big Jake is the biggest, Thumbelina is the tiniest measuring just 1ft 5in.

Big Jake, a Belgian horse, now 17, was purchased when he was just a foal by a Wisconsin farm. 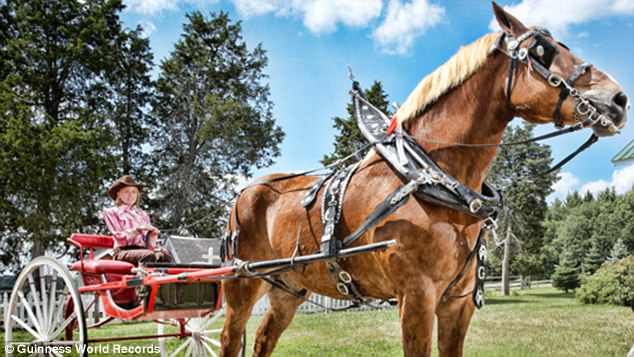 Big friendly giant: The Belgian horse weighed about 240lbs at birth and now weighs about 2,600lbs 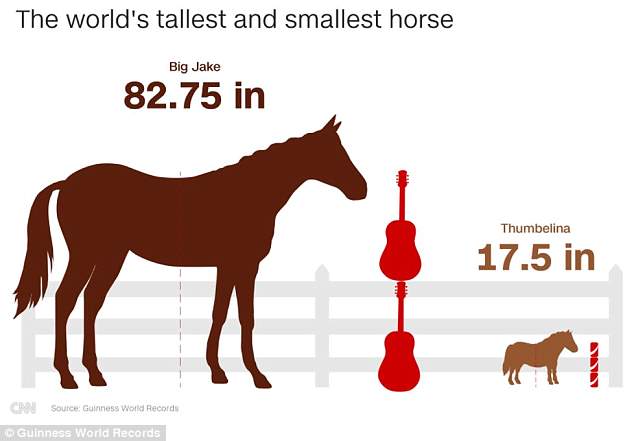 World record: When they stand side by side there’s nearly a five foot difference between them 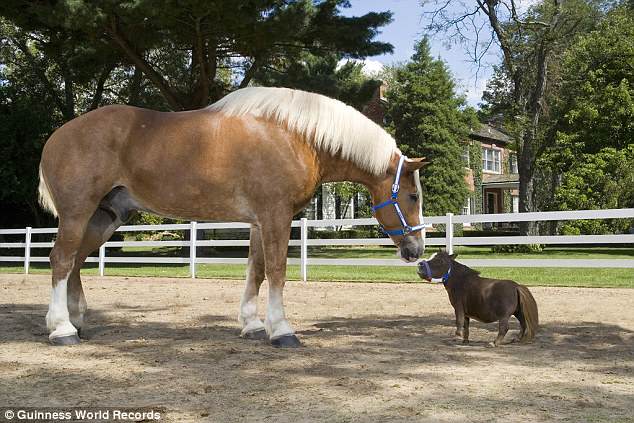 Big and little! Thumbelina pictured above with Radar, the former tallest horse in the world

‘He was purchased as a foal – he was probably three – from a relative of mine and he just grew too big for them,’ Jerry Gilbert said to CNN.

The family says they knew from the first time they laid eyes on the giant animal that he was one of the biggest horses they had ever seen.

‘He was a large foal when he was born, he weighed around 240 pounds but he had good genetics – that’s what we look for in breeding draft horses – we’re looking for good conformation and weight,’ he said.

The family contacted Guinness World Records in 2010 when Jake was around nine, as they retired the horse from competitions.

When Guinness arrived to measure the horse they were stunned to learn Jake measured 20 hands, 2.75 inches (82.75inches).

Jake is a Belgian horse which usually measure 16 to 17 hands tall.

He was officially named the tallest living horse.

‘I’ve always been interested in the Guinness book of records ever since I was a kid. I just never dreamed I’d actually own a horse that would be in there,’ Gilbert said.

‘He’s just like a family member – he’s not just an animal, he’s part of our family,’ he said.

‘He’s got a lot of strength, but he’s very docile and he just loves the attention all day long. He wants you to rub him, bathe him, spend a lot of time with him,’ he added. 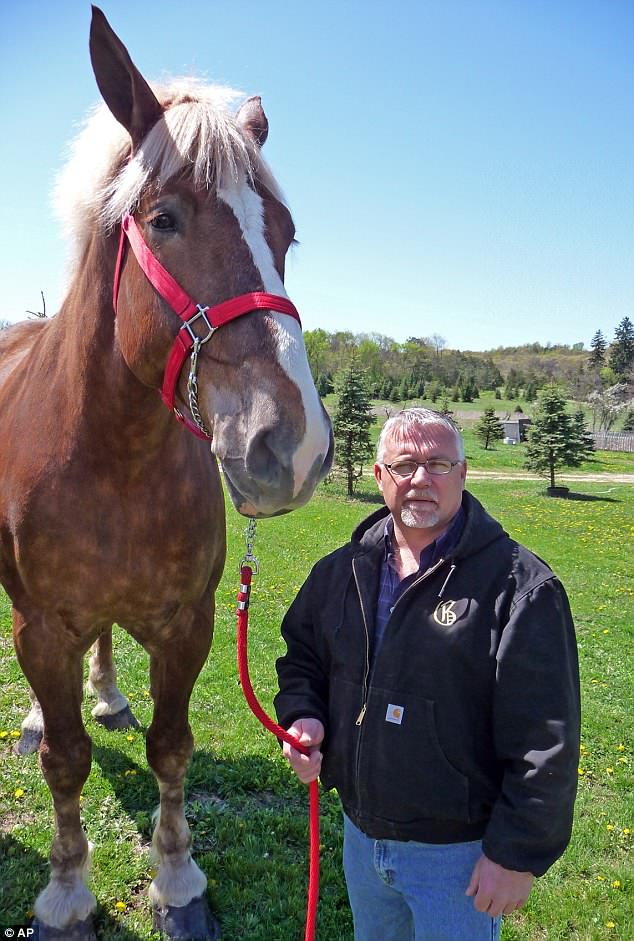 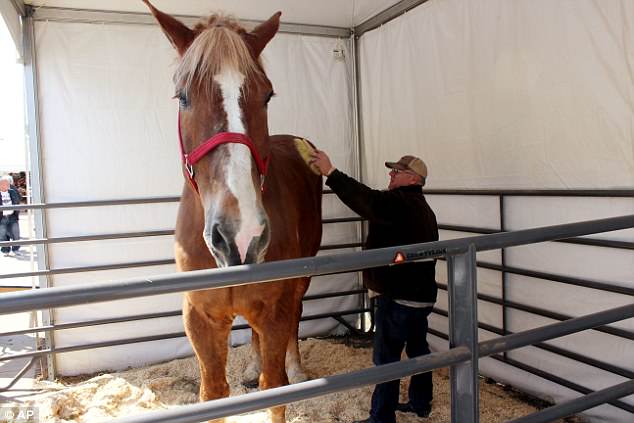 The giant horse pictured above on his farm in Madison, Wisconsin, weighs about 2,600lbs

Jake is even a celebrity in his home state.

‘He’s really taken the state of Wisconsin, people know Jake and they really like him a lot. He’s got a great disposition and he’s really friendly with the crowds that come through here,’ Gilbert said about his prize horse.

Given his size, the horse eats double the amount of food a normal sized horse would.

‘We try to ration everything so we’ll give him three grain buckets a day – morning, noon and night. Well give him 24 quarts of oats, vitamins, minerals, different things like that and then he’ll eat about approximately a bail a day,’ he said.

While Jake wins the title for the world’s tallest horse, tiny Thumbelina holds the record for being the world’s smallest, measuring just 17.5inches.

The miniature sorrel brown mare made the record in 2002.

The tiny horse was born with dwarfism at Goose Creek Farm in St Louis, Missouri and weighs just 58lbs.

‘When she was born she literally was 6 inches tall,’ her handler Michael Goessling said to CNN. 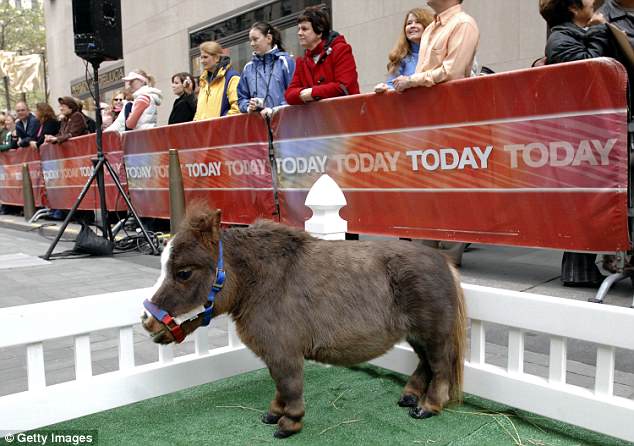 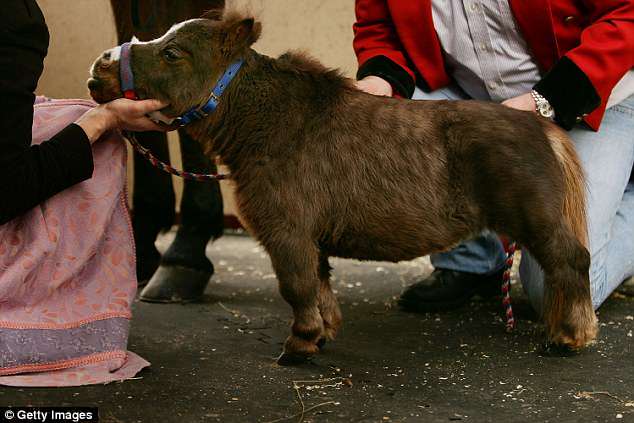 Thumbelina, also 17, is a miniature sorrel brown born with dwarfism, pictured above in 2006 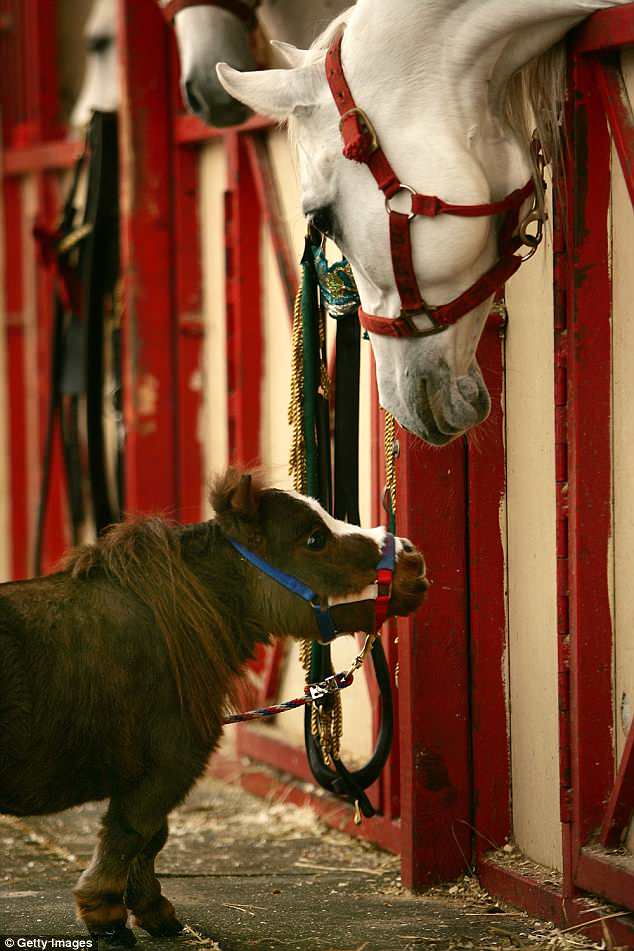 The tiny horse formerly worked as a therapy animal and now resides on her St. Louis farm

‘I thought there was a possum in the stall – it was just so tiny and then all of a sudden she stood up and I couldn’t believe what I was seeing,’ he added.

Most miniature foals average 19 to 20 inches in height, but Thumbelina never reached that height.

At first the tiny horse caused concern for her owners Kay and Paul Goessling as she was born with dwarfism.

However she hasn’t had any health complications.

Goessling adds that Thumbelina seems blissfully unaware of how tiny she is.

‘From day one she never really came to have the full appreciation of how tiny she actually is. She’s been absolutely fearless,’ he said.

Even during a photo shoot with the tallest horse in the world at the time, named Radar, Thumbelina challenged him.

‘We brought Thumbelina out on a lead and they had Radar – the tallest horse – there and Thumbelina all of a sudden reared up, bit him right on the nose and Radar started running away!’ Goessling said. 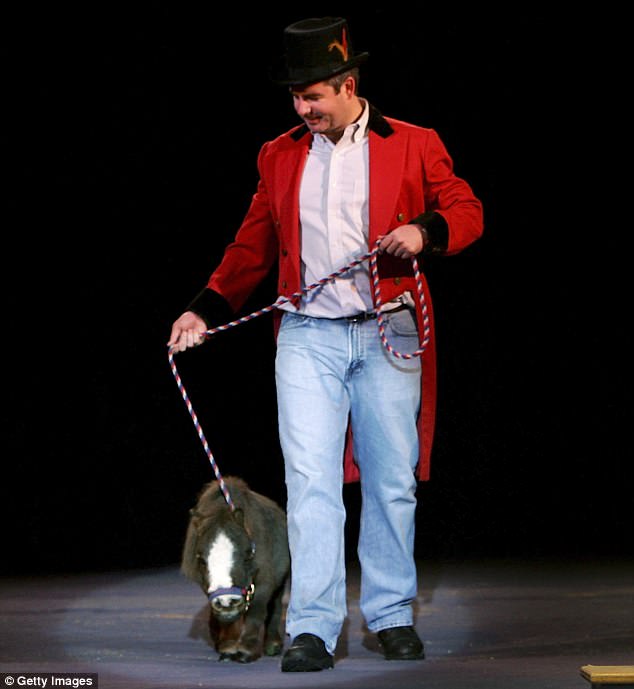 The tiny horse weighs just 58lbs, pictured above with handler Michael Goessling in 2006 Speaking on the horse’s therapy days, her owner said: ‘I had more parents come up to me with tears in their eyes saying it was literally the happiest moment of their child’s life’

‘She stands her ground and she doesn’t take anything from other horses but at the same time she’s always been so sweet and calm and tender with kids,’ he added.

‘She visited cancer patients, burn patients, they were kids that were really struggling – sometimes emotionally – and they’d have that moment with Thumbelina. I had more parents come up to me with tears in their eyes saying it was literally the happiest moment of their child’s life,’ Goessling said.

‘(Thumbelina) seems to have this ability to know the situation because these kids they’ll hug her and pull on her and rub her ears and she just sits there and takes it and she’ll nuzzle them,’ he added.

Now she spends her days on her quiet farm, sleeping in the dog house.

‘She comes and goes as she likes and she just lives in her own little Thumbelina world that has been created for her over the years,’ he said.