Holly Willoughby has become a high-street fashion powerhouse, whose every sartorial choice is a sellout. This woman is the reason why. Amy E Williams catches up with super-stylist Angie Smith

Holly Willoughby can cause clothes to sell out in minutes – from Topshop’s polka-dot dress to Anthropologie’s rainbow sequined skirt. It’s a sartorial superpower that makes her one of the few things that can shift high-street clothes right now. But she doesn’t work alone.

You may not have heard of Angie Smith, but the 37-year-old stylist from Bedfordshire is credited with transforming Holly from a beloved TV star into a bona fide fashion icon. Not so long ago the presenter and former model, also 37, was stuck in a style rut, always looking nice enough but, in hindsight, drifting dangerously close to dull, possibly even dowdy territory.

Angie Smith, a 37-year-old stylist from Bedfordshire is credited with transforming Holly Willoughby from a beloved TV star into a bona fide fashion icon

‘Holly was open to new ideas,’ Angie tells me of their fateful first meeting almost three years ago, which involved her turning up on Holly’s doorstop with a rail of clothes. ‘The main thing I wanted to do was get her into more colour – so we tried everything on and went from there. I remember her saying, “I’ve had my kids. I just need to change it up.”’

The looks Holly began wearing for her day job on This Morning – and religiously posting on her Instagram account – quickly developed a fanbase all of their own, and it has become perfectly usual for an item that Holly has tagged to sell out instantly, with brands reporting the sort of web traffic normally reserved for items worn by a certain two duchesses. The bosses at Marks & Spencer cottoned on to a very good thing, and this season hired Holly as an ambassador and the face of their Christmas campaign.

Holly’s edit of the M&S fashion collection – ‘Holly’s must-haves’, which Angie was closely involved with behind the scenes – barely had time to get comfortable on the hangers before it was flying out of the door.

And Holly, it seems, now won’t make a move without Angie. We speak the day before she’ll join Holly on the set of I’m A Celebrity to supervise all her wardrobe choices while hosting the show.

The pair were introduced through Davina McCall, a fellow TV presenter on Angie’s starry roster, which also includes TV and radio host Rochelle Humes, Geri Horner, Emma Bunton and her first client Christine Lampard. ‘When I met Holly in the flesh I remember being bowled over by how lovely and pretty she is,’ says Angie. ‘All I was doing was bringing a fresh pair of eyes. Nothing we do is too crazy – when I work with people I just want them to be a better version of themselves.’ Davina McCall told me that she now tries on everything Angie suggests, ‘Because sometimes I look at something and think, “yuck!” But then I put it on and think, “wow!”’

With Holly it was about suggesting elevated high-street options, such as Hobbs and LK Bennett, and encouraging her to mix labels, teaming, say, a Miss Selfridge blouse with a high-end Ganni skirt, or an H&M dress with a cashmere jumper. Angie describes what she has created for Holly as a ‘working wardrobe’ – effectively a uniform in disguise. The colours, fabrics and brands may change, but the shapes will repeat. ‘Holly looks best in pencil skirts and shorter A-line skirts, so that’s what we often go for. She has amazing legs – I remember saying to her early on, “We have to get your legs out!”’

Angie also wanted to steer Holly away from anything low-cut. ‘The only outfit I could recall seeing her in was that plunging white gown,’ she says, referring to a dress Holly wore presenting ITV’s Dancing on Ice that led her Celebrity Juice co-star Keith Lemon to nickname her ‘Holly Willough-boobie’. There was also, with Holly, the art of less is more. ‘I think this is true for everybody. Sometimes you need another layer or accessories, but more often you have to look at what you’re wearing – say a dress and a pair of nude heels – and know that it’s all you need.’

I wonder if Angie is ever too nice to tell her famous clients when they get a look wrong? ‘You have to be honest. I’m not very good at hiding what I think,’ she says. ‘But if someone really wants to wear something I’ll try to make it work.

‘I remember dressing a young British actress for a red-carpet event in the States. We were choosing dresses and she said, “I want to feel as though I’ve just got off the beach and still have sand between my toes.” When she said it I knew the dress for her. It made me realise that as soon as you focus on how people want to feel, not just what they want to look like, you’ll get it right.’

According to Davina, she never gets it wrong. ‘Angie always makes me feel amazing. In fact, now when I have a red-carpet do, she just turns up with three choices for me and always nails it.’

Born in Chester, Angie puts her ability to adapt to different people and work anywhere down to the fact that she moved schools and countries five times as a child, the highlight of which was five years living on a British airbase in Cyprus. Her father, Ray, was in the RAF and spent most of his career being posted around the globe. Her mother, Laura, would pick up secretarial jobs wherever they were. ‘I have my mum to thank for my love of a fashion find. She has always adored charity shops.’

When Angie was a teenager, the family settled in Bedfordshire, where Angie soon introduced her friends to the thrill of a car-boot sale. ‘We were really into those,’ she says, ‘but I did buy high-street fashion. I remember seeing a denim skirt in Miss Selfridge that I had to have. My mum said that if I wanted it I’d have to buy it myself, so she got me a job cleaning her friend’s house and I bought the skirt. In fact I have a similar one today, so I should have hung on to it!’ 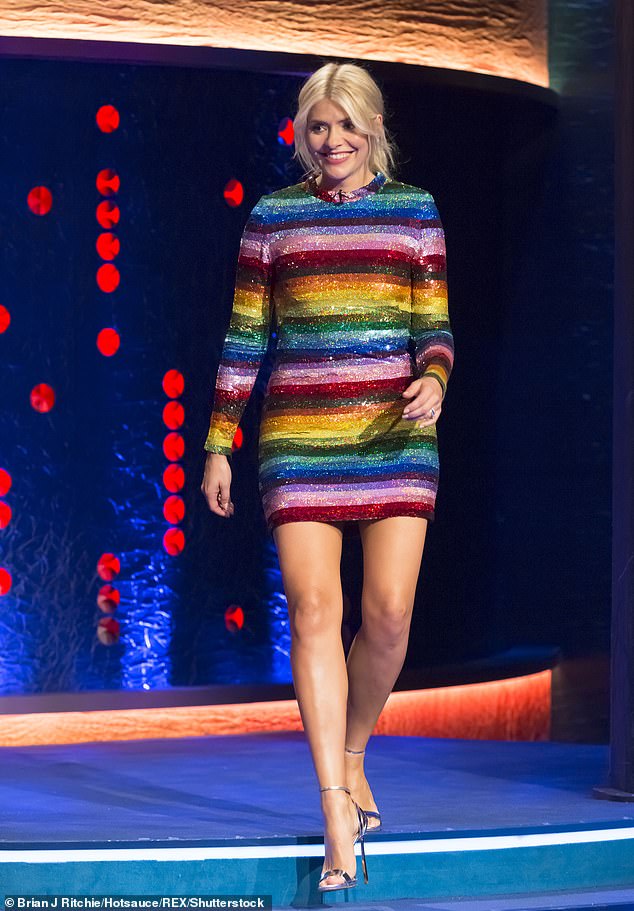 Angie styled Holly in this Ashish rainbow dress for an appearance on The Jonathan Ross Show. Retailing at £1,400, it still sold out within 30 minutes of the show being screened. Her influence didn’t stop there: soon after, high-street brand Littlewoods rushed out an affordable copy

The Pinterest-friendly London flat Angie shares with her fiancé Gavin reflects her visual flair, but her gift for great style is matched by her willingness to work hard. Angie’s big break came about thanks to a few chocolate muffins. While studying for a fashion promotion degree in Southampton she applied for summer internships on magazines by sending her CV and a muffin in a bag to fashion editors, with a note saying ‘Enjoy your breakfast’. And it worked. ‘I got a placement at [the men’s magazine] FHM; that’s the first time I realised that being a stylist is a job. I loved every second of it – from steaming the clothes to travelling to LA for a cover shoot. Eventually they offered me a job as a fashion assistant – with pay! I couldn’t believe it.’ Meanwhile she continued to do her degree part-time, and got a first.

Following FHM, Angie moved into celebrity styling after realising that she liked working with real people rather than models. ‘I love personalities with their own style and opinions.’ In 2010 she got a call to say that Dannii Minogue was looking for help with her wardrobe for The X Factor. Angie’s edit of elegant outfits went down so well that she was soon fielding calls from other TV stars seeking the same treatment, and in 2011 Glamour magazine named her as one of its most influential women under 35, an accolade that still leaves her open-mouthed.

Angie’s own fangirl moment came last month, when she styled the newly reformed Spice Girls for the promotional shots for their tour. ‘As a 90s teenager, that was a big pinch-yourself moment!’

Next on Angie’s list is sourcing Holly’s gowns for the new series of Dancing on Ice, which starts in January – all of which will be Instagrammed as demanded now by her followers. What does she think is the secret to Holly’s appeal? ‘What I admire is her discipline. Every day she will take a photo of what she is wearing and tag each element. Then people message her saying things like, “I bought this dress for my sister’s wedding”, or “I love these trousers”. She gets such an incredible response – sometimes it feels as though we are styling the nation!’ Angie pauses, not wanting to oversell herself. ‘Well, I mean of course we’re not, but…’