Arachnophobia is up there with one of the most common fears in the world, with one in every three women, and one in every four men petrified of spiders.

But Smuk the green bellied huntsman is nothing to be afraid of, according to her Queensland-based owner, Lisa Donovan.

In terrifying footage Smuk can be seen crawling up and around Ms Donovan’s hand, before making her way up the arm.

In terrifying footage for everybody with a phobia of spiders, Smuk can be seen crawling up and around Ms Donovan’s hand, before making her way up the arm

Ms Donovan shares videos online of her beloved pet, who is already the size of her hand and not yet fully grown.

‘I know those legs are what creep most people out, but that’s my favourite part!,’ she wrote on an Instagram post.

‘I know the Golden Huntsman (Beregama Aires) is supposed to be the largest species in Australia, but I swear she looks bigger already than the two Golden adult females I have, and I believe she is only sub-adult.’

Users were quick to share their opinions on the platform, with some calling the spider ‘beautiful’, and others expressing their fears. 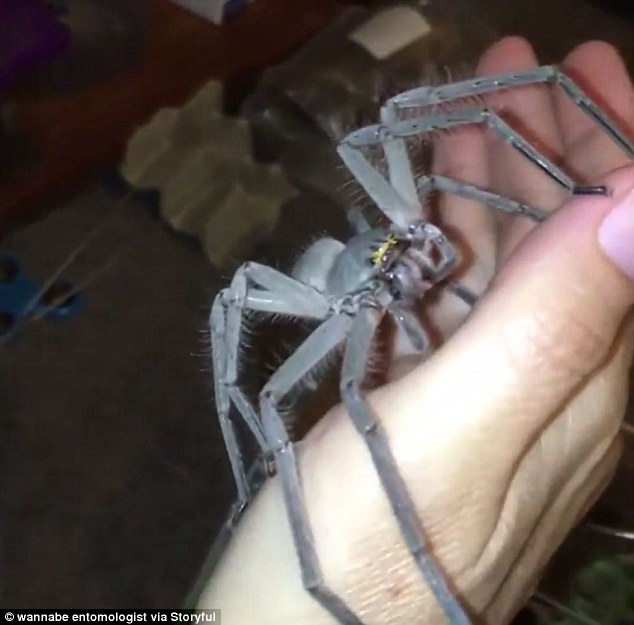 Ms Donovan shares videos online with her beloved pet, who is already the size of her hand and not yet fully grown

‘It’s those big nippers that scare me, and how fast they can be,’ one user wrote.

‘She’s so pretty! It looks like she has a lavender tint.’

‘I wish my huntsman would let me hold her like that!,’ another wrote.

Smuk is just one of many creatures Ms Donovan dotes on, sharing a range of colourful and terrifying species on her social media platform.

But Smuk is one of the largest, and tamest spiders she owns, often spending her days on her owner’s hand and arm.

The species is known to have a lifespan of up to two years.

A green bellied huntsman’s bites can be painful to humans, but symptoms are normally only localised pain and swelling. It can occasionally cause mild nausea and headaches.