Meet the children with more savings than mum and dad

Olivia Pratt may only be nine years old, but by squirrelling away birthday and Christmas gifts she has already amassed around £4,500 in savings.

By contrast, after an expensive year renovating their house, her parents, Claire and Damien, have just £900 set aside for a rainy day.

It may seem unusual for children to have more in savings than their parents, but experts say it’s a growing trend.

Money matters: Olivia Pratt, pictured with her mother Claire, is buying her own bed from her savings

Nearly four in ten parents told researchers at Coventry Building Society that they have less in savings than their children.

Meanwhile, pocket money app RoosterMoney found that children aged four to 14 receive £273 a year on average, and stash 38 per cent of this in a savings account.

Claire, 41, a financial assistant, from Huddersfield, says Olivia seldom touches her savings, and is not really aware of how much money she has in her Yorkshire Building Society account, which her parents opened for her when she was born.

But Olivia is starting to realise that there are perks to having your own reserves.

Her parents are currently redecorating her bedroom and Olivia has her heart set on a £100 second-hand bunk bed with built-in wardrobe and chest of drawers.

However, Claire says: ‘Things are a bit lean at the moment and we cannot afford to get it for her now.

‘But she really wants it and has offered to buy it herself. It makes us feel a bit mean as parents, as we should be the ones paying for it, but we are spending more than we can afford at the moment.

‘Olivia will continue to get gifts from the family — and I think being able to buy the bed gives her a sense of responsibility.

‘She really cannot wait, and the fact that she is paying for it has made her even more excited.’ 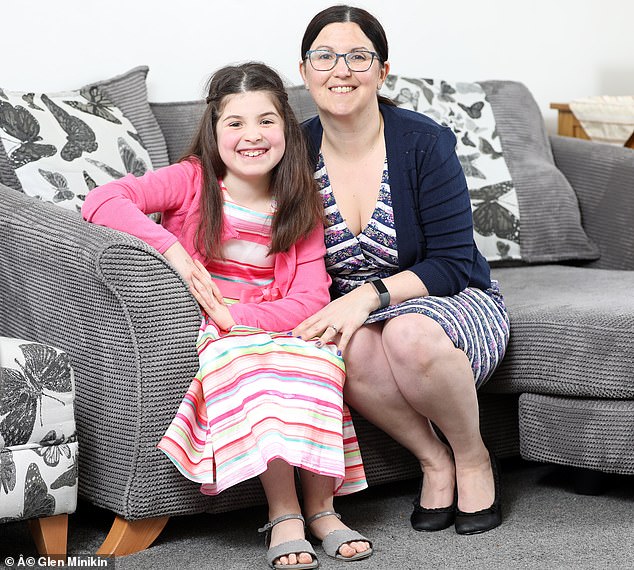 Claire, 41, a financial assistant, from Huddersfield, says Olivia seldom touches her savings, and is not really aware of how much money she has in her account

Keen to teach Olivia the value of money and how to budget, the Pratts have also decided to start paying Olivia a small amount of pocket money each week.

She will get £2 a week plus £2.50 for daily chores, such as making her bed, unloading the dishwasher and feeding their cat, Spice.

The pocket money will be paid into a GoHenry account, which they can control via a smartphone app. Olivia will then get a pre-paid card that they can load up with cash for her.

Claire says: ‘I think it’s great that Olivia has been building up her savings — and will continue to do so as she gets older.

‘At some point we will need to sit down and talk to her about the money she has — but I do not know when the right time would be.’

Stay-at-home-mum Amanda Levelle, 49, says she has around £400 to £500 in savings, although this can fluctuate depending on her husband’s work as a gas engineer.

Meanwhile, her 16-year-old son Shae has built up a savings pot of £1,400. For the past ten years, he has been getting around £10 to £15 pocket money each week from his parents, which goes straight into a savings account — as does any cash he receives as a present.

Now Shae is in full-time college studying electrical engineering, his parents give him another £20 a week for food and travel. And by being frugal, he often has money left over, which he saves.

Amanda manages his passbook, but allows him to take out his money to pay for college trips and excursions with the Air Cadets. 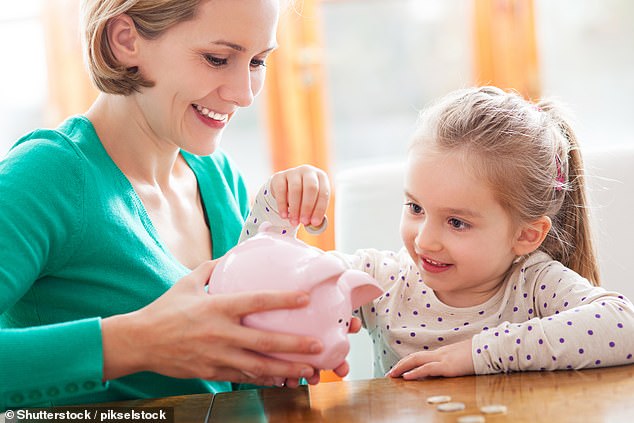 Parents can find it hard to save – the average couple spends £74,333 raising a child until they are 18, according to the Child Poverty Action Group

When the family goes on holiday, Shae also dips into his savings for spending money.

Amanda, who lives in the South Lakes, Cumbria, says Shae understands the value of money, but still has lessons to learn.

‘Before Christmas he withdrew £140 from his savings to go on a college trip to the Old Trafford shopping centre in Manchester, and came home with an £80 limited edition Parker pen, which had been reduced in the sale,’ she says.

‘We explained to him that there was no need to be so extravagant; that he could buy a pen for £1.’

Now that Shae has a card linked to his account, Amanda has instructed him to always check his balance before buying anything.

She says: ‘We want him to enjoy his childhood, but also watch what he spends.

‘He is looking for a part-time job and we’ve told him to do anything — from cleaning toilets to working in a kitchen — to teach him the value of money.’

Last year, the Mail revealed how half of adults in the UK do not put aside any money after they are paid each month.

Parents can find it even harder to save — the average couple spends £74,333 raising a child until they are 18, according to the Child Poverty Action Group.

Jeremy Cox, head of strategy at Coventry Building Society, says: ‘Data suggests that a lot of people in their 20s, 30s and 40s are saving less than their parent’s generation.

However, we’ve had historically low interest rates for over a decade, which has had the dual effect of making borrowing cheaper and saving less appealing.’

Will Carmichael, chief executive of RoosterMoney, says: ‘Many parents may prioritise their children’s finances over their own to ensure they get the best start in life.

Teaching kids how to engage with money and developing a savings habit can also change the way parents view their own finances, and could encourage them to also put money away.’