Princess Charlotte waves to crowds as she visits her mother in hospital. Her adorable £45 blue dress was made by the Duchess of Cambridge’s friend and sold out within hours

Only the Duchess of Cambridge could make a fashion statement within hours of giving birth, walking onto the hospital steps looking immaculate in a bespoke Jenny Packham dress.

Her poised style is the reason she’s been named one of the best-dressed women on the planet by Vogue — and everything she wears tends to sell out in hours.

The so-called ‘Kate Effect’ was in evidence again this week when the adorable £45 blue dress Princess Charlotte was dressed in to visit the Duchess of Cambridge in hospital sold out within hours.

But Kate’s choice of outfit for her daughter had a hidden provenance: it was made by Kate’s school friend Alice Avenel, who runs a tiny clothing company, Little Alice London.

She’s not the only friend who works in the fashion industry who canny Kate has kept in her circle — and who she relies on for advice to keep her looking her stylish best.

In return? Whenever Kate wears ones of her friends’ pieces, it instantly sells out.

Here, from her jewellery designing pals to her secret stylist, we reveal Kate’s very fashionable friends (and the ones who owe a large slice of their success to her) . . .

FROM GLOSSY POSSE TO SMOCK QUEEN

At Marlborough College, blonde Alice Avenel grew close to Kate when they played on the tennis team together.

She was also on the hockey team with Pippa, and at Edinburgh University with her too, where Alice — who friends say is bubbly and fun — read French and Spanish.

The daughter of an army officer turned businessman, she was also, coincidentally, a teenage friend of Prince William and a peripheral member of the ‘Glossy Posse’ — William’s Gloucestershire friends who used to hang out at Highgrove. 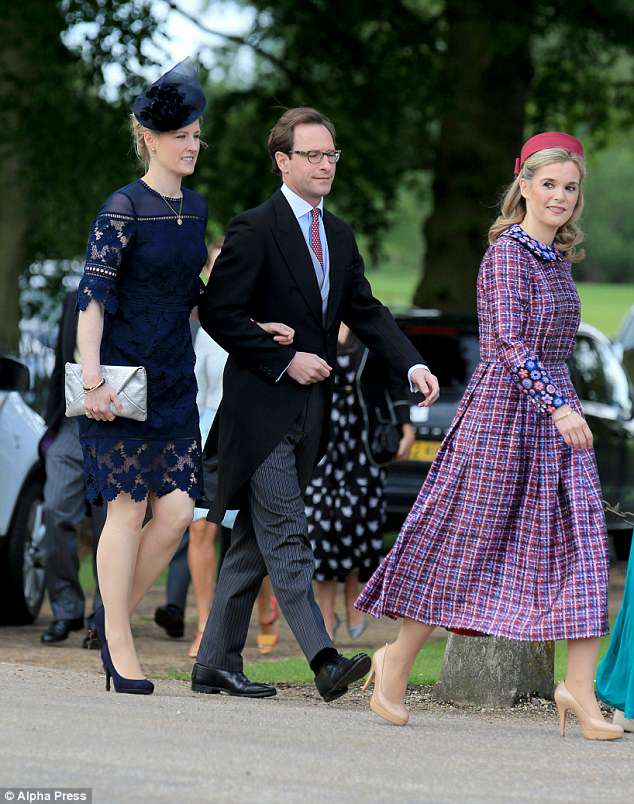 Alice Avenel (left in blue) grew close to Kate when they played on the tennis team together at Marlborough College. Her brand came up with the Periwinkle dress worn by Princess Charlotte

In 2012, Alice married well-heeled banker Gerald Avenel in a traditional rural ceremony in Somerset. William, Kate and Pippa all went to the wedding.

Alice — who’s had a variety of careers from teacher to actress to JP Morgan trainee — founded Little Alice London a year ago.

The story goes that after having three children, she discovered a ‘passion for smocking’ (a type of ruched fabric).

She said: ‘My clever mother kept all of my beautiful smocked dresses from when I was a child but I found it very hard to find affordable dresses in the shops…my children wear smocked clothes all the time, not just for special occasions.’

So deeply embedded is she in the Cambridges’ inner circle that, as a reward for her loyalty and discretion, she has had what is probably one of the biggest sale boosts for a small business of modern times: Princess Charlotte waving adorably in her brand’s £45 Periwinkle dress on the steps of the Lindo wing.

With its puff sleeves and Peter Pan collar, it has the added virtue of being machine washable and reasonably priced. After Charlotte modelled it, it sold out in minutes.

LADY WITH DESIGNS ON DEMURE DRESSES

The glamorous daughter of Prince Charles’s friend the 4th Marquess of Reading, she was another Glossy Posse teen friend and holidayed in Cornwall with William and Harry in their single days.

She married Kate’s St Andrew’s ex-boyfriend (the one before William), lawyer Rupert Finch, in 2013 and they now have two young daughters.

A handsome, cricket-playing type, he has never breathed a word about his royal ex. Still, there doesn’t seem to be any awkwardness about the past. 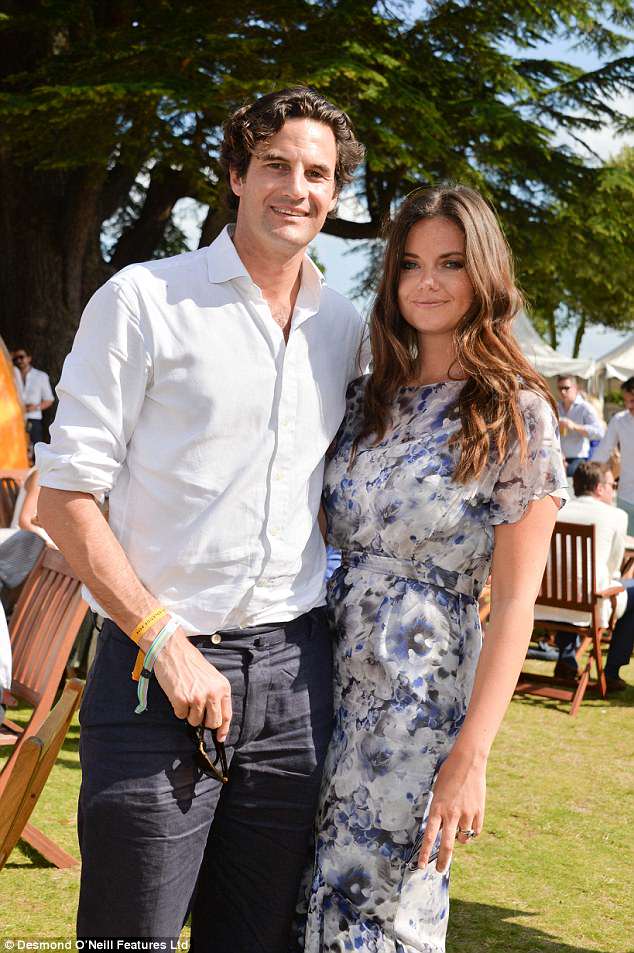 Lady Natasha Rufus Isaacs with her husband. She holidayed in Cornwall with William and Harry in their single days and Kate has been repeatedly photographed in her Beulah London designs

Ever since 2011 when Natasha set up Beulah London with friend Lavinia Brennan, Kate has been repeatedly photographed in their wares, most recently in January wearing one of their pretty scarves.

It’s easy to see why Kate is such a fan. Beulah London designs are flattering and modest enough for Kate — she wore a silk chiffon dress of theirs to Alice Avenel’s wedding and many of their dresses on tour in Kuala Lumpur, New York and Bhutan.

Everything off-the-peg is below £700 and the business has an ethical foundation, running its own trust providing jobs for women who have been victims of sex trafficking in India.

They set it up after a visit to Delhi and 10 per cent of their profits go to the trust.

Rupert is very frank about the boost Kate’s custom provides, saying there is a surge on the website every time Kate wears Beulah.

Eternally stylish Arabella Musgrave, head of communications at Gucci, was one of Prince William’s first girlfriends in his Cotswold days.

The relationship lasted nearly a year back in 2001 and it is said Prince Charles was a fan.

In 2014, she married George Galliers-Pratt of the Cayzer banking dynasty. They have a two-year-old daughter. 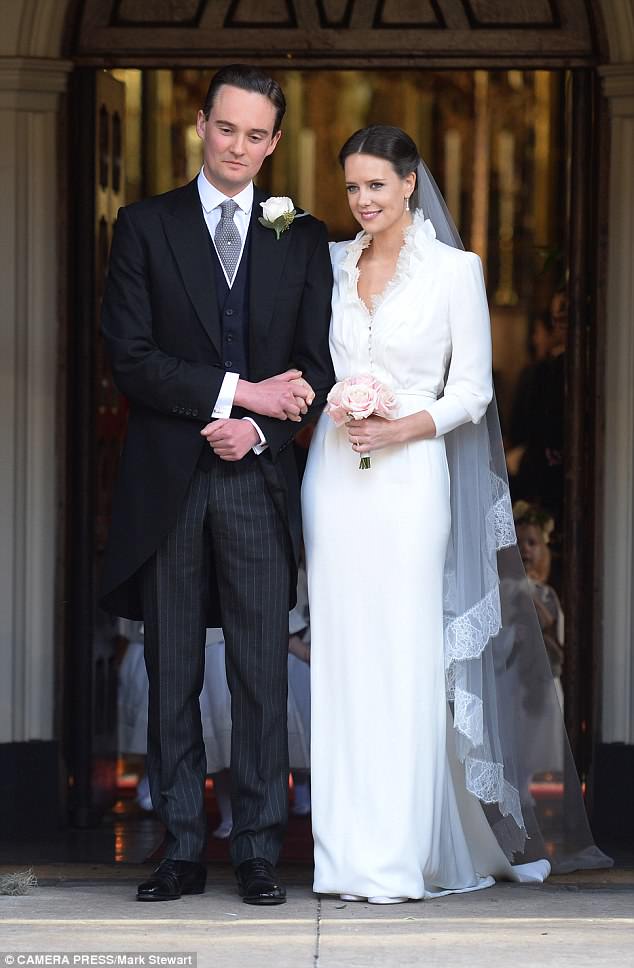 Arabella Musgrave on her wedding day. She was one of Prince William’s first girlfriends in his Cotswold days and is head of communications at Gucci. Kate wore a £1,790 ribbon-trimmed tweed Gucci mini dress to the Victoria and Albert museum in 2017

Her wedding, bespoke Gucci wedding dress and all, was in U.S. Vogue.

Under new(ish) designer Alessandro Michele, who took over in 2015, Gucci is on a roll: its online sales doubled in the last quarter alone and Kate, not a Gucci regular, isn’t immune to the buzz surrounding the brand.

She wore a £1,790 ribbon-trimmed tweed Gucci mini dress to the Victoria and Albert museum in 2017.

It was one of her most stunning recent looks, drawing Jackie Kennedy comparisons.

The other fashion PR who moves in royal circles is willowy Violet von Westenholz of Ralph Lauren, who introduced Prince Harry to Meghan Markle after meeting the actress through her work and taking her to Wimbledon.

She’s the daughter of ex-Olympic skier, now interior designer and antiques dealer Baron Piers and his wife, who are bosom pals of Charles and Camilla and live in a rambling, antique-stuffed property in Hertfordshire. 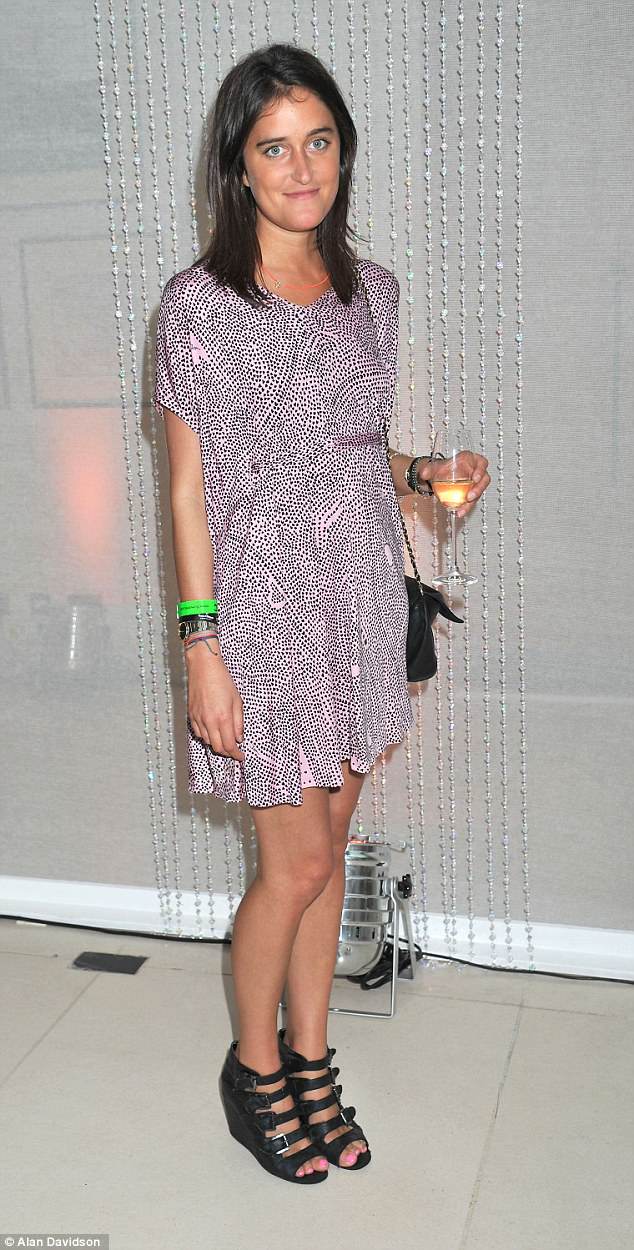 Violet has known both Princes for years and her sister Victoria was once touted as a bride for Harry.

Kate wore Dolce & Gabbana for the first time while Violet was working there, a burgundy lace dress for a visit from the Chinese president, and recently wore one of Ralph Lauren’s Breton-style ‘Tori’ tops, £85, at Houghton House horse trials.

Violet may be the only person in the position to give advice to both Kate and Meghan.

Rosie Ruck Keene, a former City headhunter, consoled William when he split from Kate in 2007.

Her husband himself once dated Prince William’s ex-girlfriend, Olivia Hunt, in their university days, and is now George’s godfather. All very tangled!

Rosie has an entrepreneurial streak. 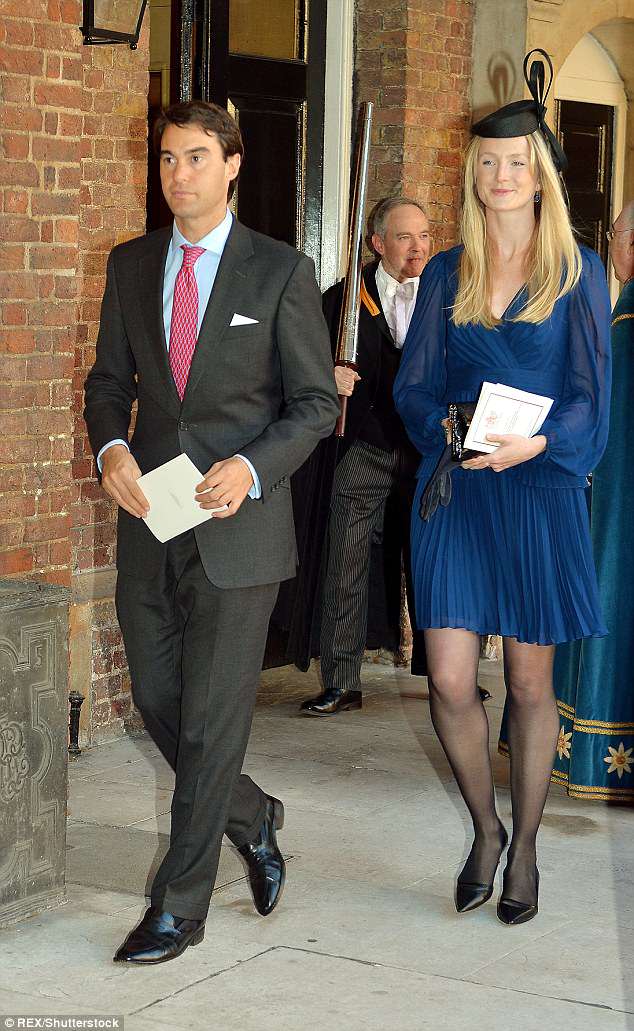 Rosie Ruck Keene, a former City headhunter, consoled William when he split from Kate in 2007.  Kate has worn several things from her fashion brand Troy London

She started a private riding club before launching her fashion brand Troy London with her sister Lucia; the label sells things like cashmere capes with fox fur trims for £1,250.

Kate has worn several things from their fashionable outerwear brand — a £350 khaki parka with a flattering cinched waist is among her favourites.

Rosie’s husband William, known as a good shot (he shoots partridge with Prince William), grew up at Anmer Hall — now the Duke and Duchess of Cambridge’s Norfolk residence — before moving to the neo-Palladian 4,000-acre estate Hilborough his father bought and built nearby; it is known for its magnificent game shoot.

So, in spite of having no formal fashion training, Rosie is perfectly placed to design royal country garb that doesn’t make the wearer look like a sack of potatoes.

FAMILY FRIEND AND HER £15K EARRINGS

Family friend and jewellery designer Zoe Benyon, of Robinson Pelham jewellery, is Kate’s favourite for when she wants some contemporary dazzle.

The Middletons are close family friends of the Benyon family, who are the local toffs down in Bucklebury — they live on the magnificent Englefield estate which has been the family seat since the 18th century and comprises 20,000 acres, a model village and an Elizabethan house.

So grand is it that it stood in for Buckingham Palace in The King’s Speech and for Sandringham in Netflix’s The Crown.

Pippa married James Matthews in the church there last May.

His seat is Newbury and he is a traditional hunting ‘n’ fishing type who for a while worked at the Department for Environment, Food and Rural Affairs .

His second wife, Zoe, mother of his two youngest boys, aged ten and 12, meanwhile, is a gem expert with a love of colour.

She set up her company with her partners over 20 years ago. They now have a boutique in Chelsea.

The company sprang to prominence when Kate wore their diamond earrings (£15,000 custom-made) at her wedding.

Most recently, in February, she wore enormous diamond-encrusted hoops in February in Sweden (£4,900). They also designed Pippa’s wedding tiara.

Robinson Pelham jewels have been described as quintessentially British: ‘low-key, refined yet lively, witty and, most of all, eminently wearable — the overall vibe is polite but has verve and personality,’ wrote one reviewer.

The other jeweller friend at Kate’s wedding was Claudia Bradby, wife of ITV’s News at Ten broadcaster Tom Bradby, who was once ITV’s Royal correspondent.

He has formed a warm relationship with Prince William and famously secured the couple’s televised engagement interview.

The new necklace is based on a charm that Claudia originally designed in collaboration with Kate when she was at Jigsaw. 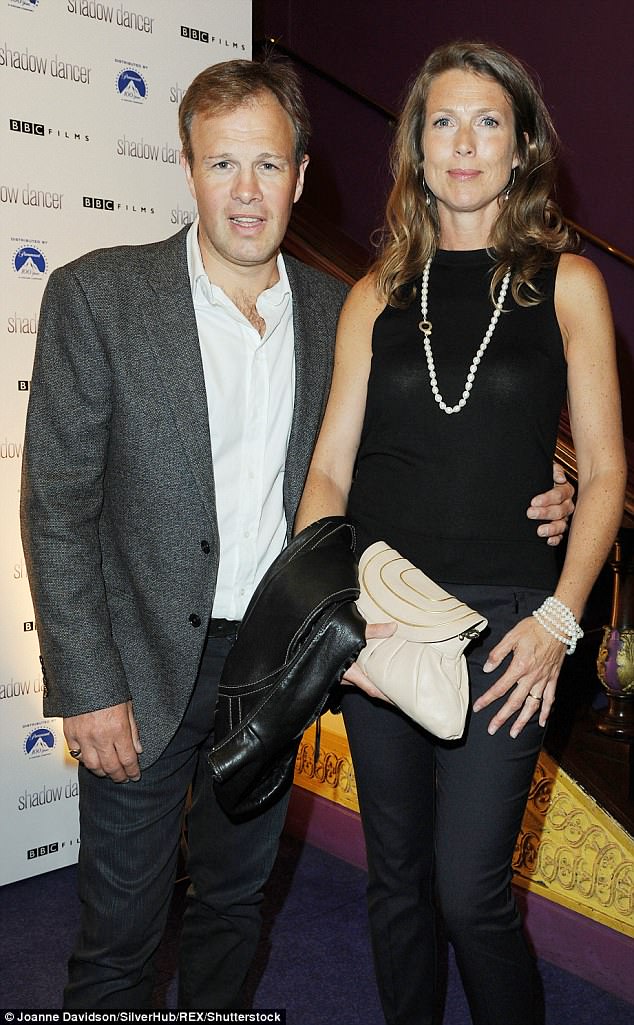 Claudia Bradby with her husband, ITV’s News at Ten broadcaster Tom Bradby. She designed a charm with Kate when the Duchess was working at Jigsaw

The Mother and Child pendant features a solid silver ‘Kate’ nugget alongside a baby cultured pearl charm in a choice of white, pink or silver colours.

Claudia designs jewellery at the other end of the price spectrum to Robinson Pelham — it’s all between £20 and £500 and designed to be worn with everyday clothes, a concept she developed when living in Hong Kong.

A Vice-Admiral’s daughter, she lives in Stockbridge, Hampshire, and has three children (19, 20, 22) with Tom.

Her whole family is entrepreneurial: brother Simon set up Sweaty Betty with his wife (both Kate and Pippa have worn their stuff, too).

But would we ever have heard of Claudia if it wasn’t for her Kate connection? Who knows…

Emilia Jardine-Paterson is one of Kate’s best pals and is consulted by the Duchess on everything style-related.

She’s an interior designer for d’Erlanger and Sloan, and yet is described as Kate’s ‘secret stylist’ — referring not only to her interiors advice at Apartment 1a at Kensington Palace and Anmer Hall, but also to her counsel when it comes to Kate’s wardrobe. 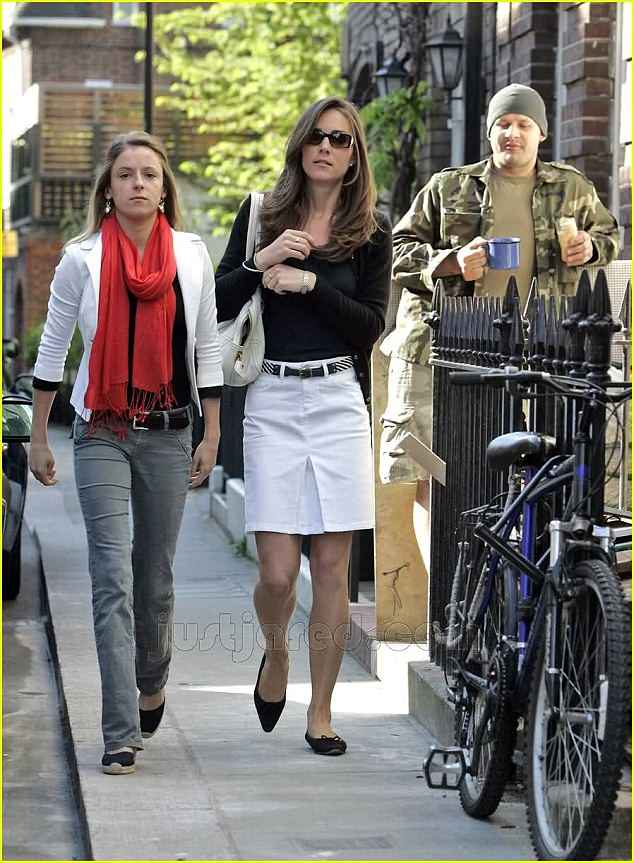 Emilia Jardine-Paterson (left) with the Duchess of Cambridge. She is one of Kate’s best pals and is consulted by the Duchess on everything style-related

She has reportedly encouraged Kate to wear new cuts and colours and to move away from the safe colours and cuts favoured by the Middletons — for instance, Emilia apparently was the driving force behind the much-praised ruffled Alexander McQueen outfit Kate wore to George’s christening.

A mother of two young children, it is said that Kate admires her knack for fashion and quirky vintage looks.

She has her stylist and assistant Natasha Archer to call everything in and organise her wardrobe formally, but Emilia is always on-hand for advice.

Godmother to Prince George, Emilia was both a Marlborough friend of Kate’s and a teenage friend of Prince William.

She married David Jardine-Paterson, scion of a Dumfriesshire landed family who was at Eton with Wills and who is the brother of Pippa’s ex-boyfriend from Edinburgh, JJ.