Meet the man named after all three Apollo 11 astronauts

Celebrating his 50th birthday, Aldrin Armstrong Collins – who was named after ALL of the Apollo 11 astronauts after his mother went into labour on the eve of the Moon landing

A spate of new Neils entered the world in the months after the 1969 moon landing, with parents keen to recognise the historic event.

But one man ended up named Aldrin Armstrong Collins – after all of the Apollo 11 astronauts.

Now father-of-three Aldrin West-Wilding is marking his 50th birthday and the anniversary of the moon landings with a party at the National Space Centre in Leicester today. 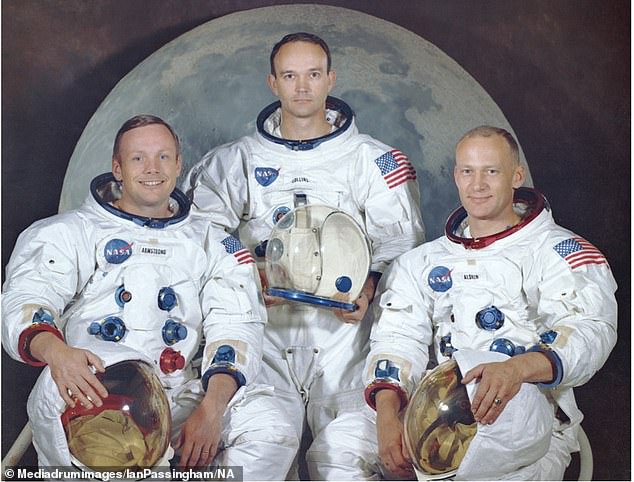 He was named after the three Apollo 11 astronauts, Neil Amrstrong, Buzz Aldrin and Michael Collins

Aldrin’s mother Diana was nine months pregnant when she huddled around her tiny TV with her huge family in the living room of their village home in Theberton, Suffolk, on July 20, 1969, to watch the lunar event.

Her husband Edgar and eight children were captivated and the excitement prompted mum Diana into her first twinges of labour.

Two days later, her youngest son was born, and proud parents Diana and Edgar said the children could choose his name. Space-mad, they named him Aldrin Armstrong – and he lived up to his name by being enthralled by space travel. Aldrin, from Barry, Wales, added his own third name – Collins – after Michael, the third, often-forgotten astronaut on the Apollo 11 team.

He recalled: ‘I was the last of nine kids, and my eldest brother was very nearly 15 when I was born. My dad was a TV engineer so thankfully they had a TV to watch the space race on. Two days after I was born, my sister asked if she could name me after the first men on the moon. Neil was her first choice but that was a little posh – we were a common-as-muck family – so they went for Aldrin Armstrong.

The mission saw Neil Armstrong and Buzz Aldrin leave in the Apollo Lunar Module to make the first crewed landing on its surface. But team member Michael Collins stayed in orbit around the moon. Aldrin felt ‘guilty’ Collins wasn’t recognised in his name, and later added it by deed poll.