Meet the man with the 22ft moustache: civil servant has been growing his whiskers for 30 years

An Indian man has claimed he has the world’s longest moustache – measuring a whopping 22 feet.

58-year-old Girdhar Vyas, from Bikaner, Rajasthan, has become somewhat of a local celebrity and often poses for pictures with fans of him and his moustache.

Mr Vyas has been growing his moustache since 1985 and is confident his wonderful whiskers are the longest in the world.

58-year-old Girdhar Vyas (pictured)  has claimed he has the world’s longest moustache. On the wall behind him he displays pictures of his younger self 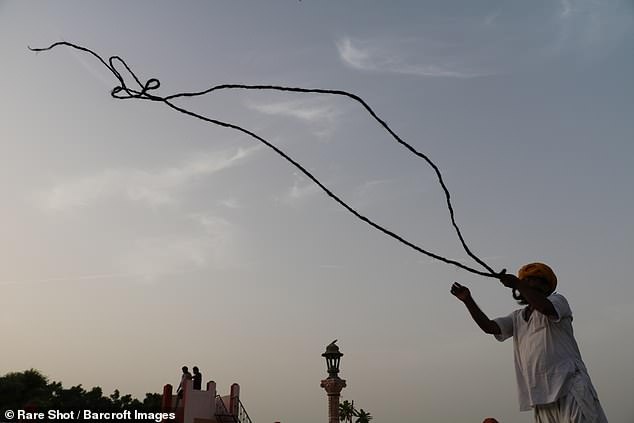 The previous record for the world’s longest moustache belonged to Ram Singh from India. However Singh’s offering was a mere 18.5 feet, a 3.5ft different to Mr Vyas’.

The civil servant is so committed to the maintenance of his ‘tache that he goes through a complicated daily routine to maintain it, spending up to three hours a day on grooming and applying oil and pepper.

He told Bulgarian TV channel BTV that it’s been difficult to grow the moustache to 22 feet.

‘This is not easy at all. It takes two to three hours grooming daily.’

‘As soon as I wake up, the first thing I do is spread my moustache on the bed. Once I have done that I put some oil in a cup and I massage it with the oil. It takes around two hours to apply the oil.

‘After that, I add lemon, and black pepper powder to it, and massage it in every evening. All this helps to keep my moustache soft.’ 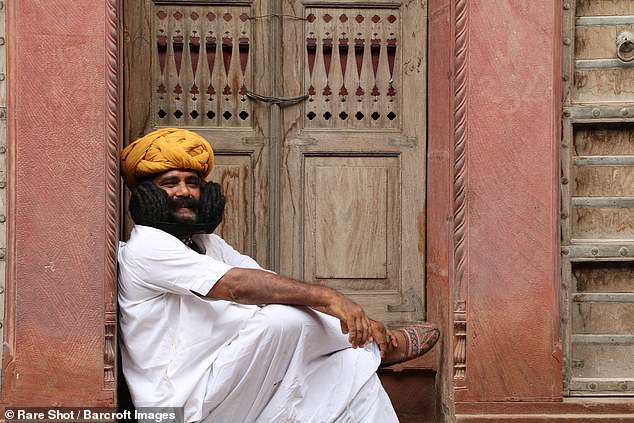 Mr Vyas said he will continue growing his fantastic facial fur forever, and added that he hadn’t shaved his moustache for the last 33 years.

He washes his moustache once a year but doesn’t apply any shampoo and said he doesn’t believe in using any chemicals.

I only apply curd and lemon. In order to keep my moustaches dry, I put them in a bag when I take a shower.’ 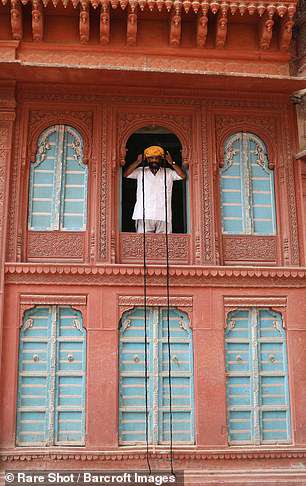 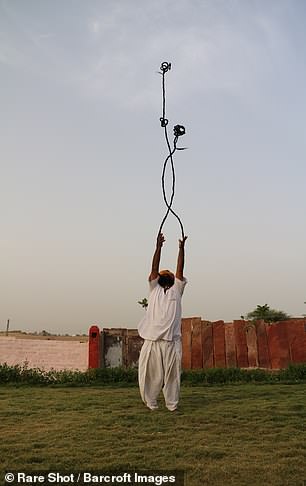 Despite his love for the ludicrously long moustache, Mr Vyas said there are consequences.

‘I am not able to eat everything. I have to eat selectively. I can’t even have an ice cream or I won’t be able to eat food without a spoon. I can’t eat a variety of things.’

He has also been dubbed the ‘Moustache Man of India’ by locals at his village. 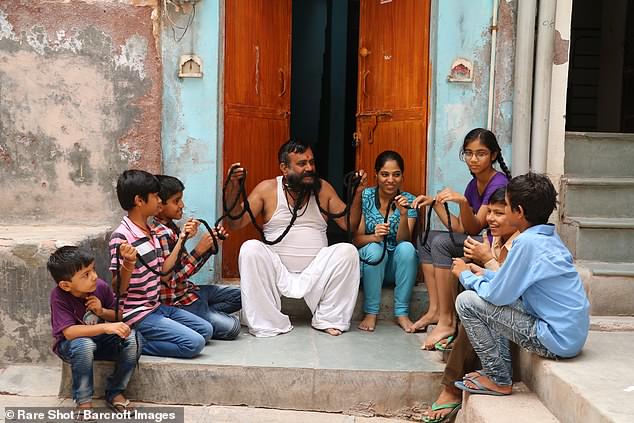 He said: ‘People get baffled to see such a long moustache. People do call me with different names. At my village people call me ‘Moustache Man’.’

As well as this his son Shiv Vyas said he feels proud of his dad.

‘Our whole family is proud of dad. People ask about our father. We definitely feel proud of him. No matter where I go am treated like royalty, just because of his moustache. 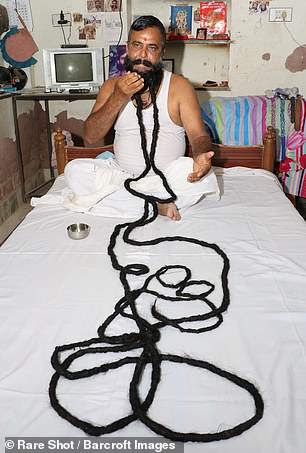 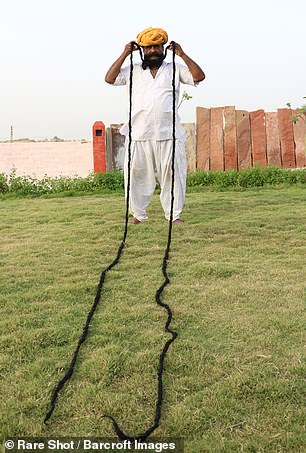 Every morning when he wakes up, Mr Vyas said he lays out the moustache on his bed (left)

‘Having long moustaches is a cultural trait of Rajasthan and our dad is keeping it.’

Because of his long moustaches, people gather outside his house everyday.

He said: ‘People wait outside my house and once I leave, they come to take pictures with me. I don’t mind taking pictures with people.’ 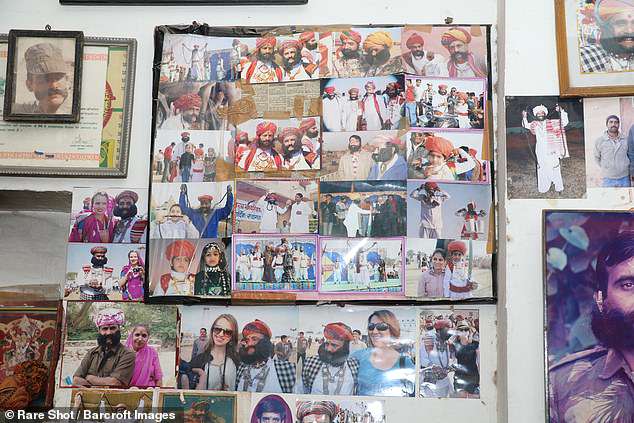 Step in time: the photos show his moustache throughout the ages

‘They click pictures with me as if I am a celebrity. I feel good about it.

‘People love me for having long moustaches.’

Even though he has become famous for the moustache, Mr Vyas has also occasionally been bullied and criticised for its legnth.

He said: ‘I was bullied for having a long moustache. Some people believed that I was unhygenic because of my long whiskers. But it doesn’t matter to me.’

‘Most people do respect me. They love seeing me. Some people come to see me everyday.’ 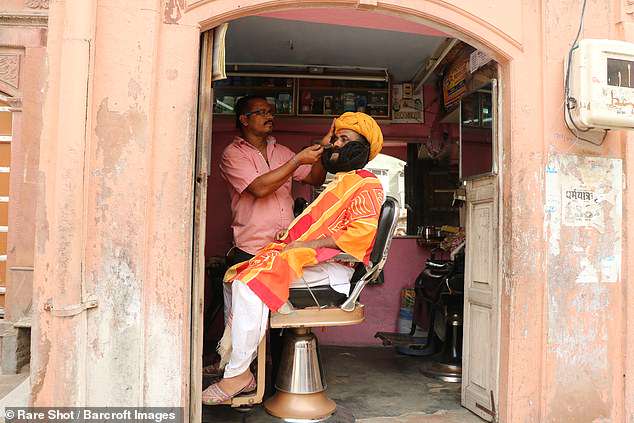 Mr Vyas also has a barber who takes care of his moustache every week.

He said: ‘I have a friend who is a barber. He is the only person who takes care of my moustaches. I get some plot ends trimmed. I don’t let others do it.

‘That is why the moustache doesn’t look scraggly.’ 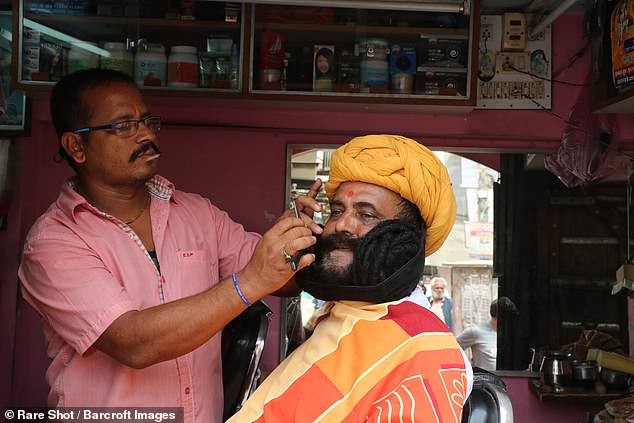