Meet the mutts whose owners are crossbreed crazy

They’re cute, cuddly and have adorable names. No wonder TV presenter Ant McPartlin has adopted two Maltipoos — a cross between a Maltese terrier and a miniature poodle. Milo and Bumble cost Ant, 43, a reported £1,000 each.

Thanks to a growing celebrity fanbase and breeders experimenting with ever-crazier combinations, poodle crossbreeds are eight times more prevalent today than a decade ago — with ‘poos’ and ‘doodles’ everywhere.

So who came up with the first ‘Franken-fido’? Why are they so expensive? And has our passion for poodle crosses gone too far?

To date, there are around 30 poodle crossbreeds in the UK.

The most popular is the labradoodle, first bred in the late Eighties from a Labrador retriever and a poodle, followed by the cockapoo (a Cocker Spaniel-poodle mix).

Over the past decade, however, breeders have experimented with even more unusual crossbreeds — such as the Saint Berdoodle (a Saint Bernard-poodle), great danoodle (Great Dane and a poodle) and doodleman pinscher (Doberman pinscher-poodle).

There is, in theory, no limit to the number of poodle crosses, as long as the parents are able to mate (in most cases, the larger of the two must be the female so it can carry the pup). 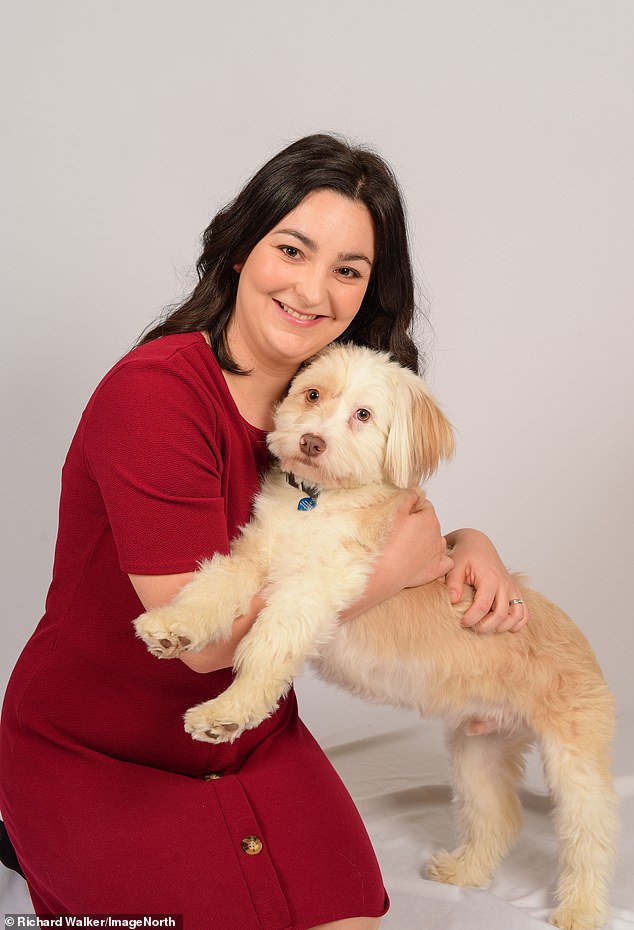 Laura Garwood from Sheffield, a part-time university receptionist with her Eskipoo, Alfie

You can get the Irish wolfdoodle (Irish wolfhound-poodle), boodle (an English bulldog crossed with a poodle), and dalmadoodle (Dalmatian-poodle), all striking in appearance.

‘It seems that anything goes,’ says Barb Turnbull of the Doodle Trust rescue charity. ‘People are crossing anything and everything with a poodle to create cute pups.’

Experts agree that if a poodle cross mates with another identical cross, or one of its parent breeds, the offspring will be the same breed as the cross.

But, if a cross mates with a different purebreed — or another type of hybrid dog — then three or even four-way mixes are possible: such as the cavapoochon, a Cavalier King Charles spaniel-poodle-bichon frise cross.

Breeder Wally Conron started the craze for poodle crosses in 1988 while working at the Royal Guide Dog Association Of Australia.

Asked to come up with a suitable dog for a short-sighted wife and a husband allergic to animal hair, he bred a Labrador (a reliable guide dog) with a poodle (which doesn’t shed its hair) and called the offspring a ‘labradoodle’. 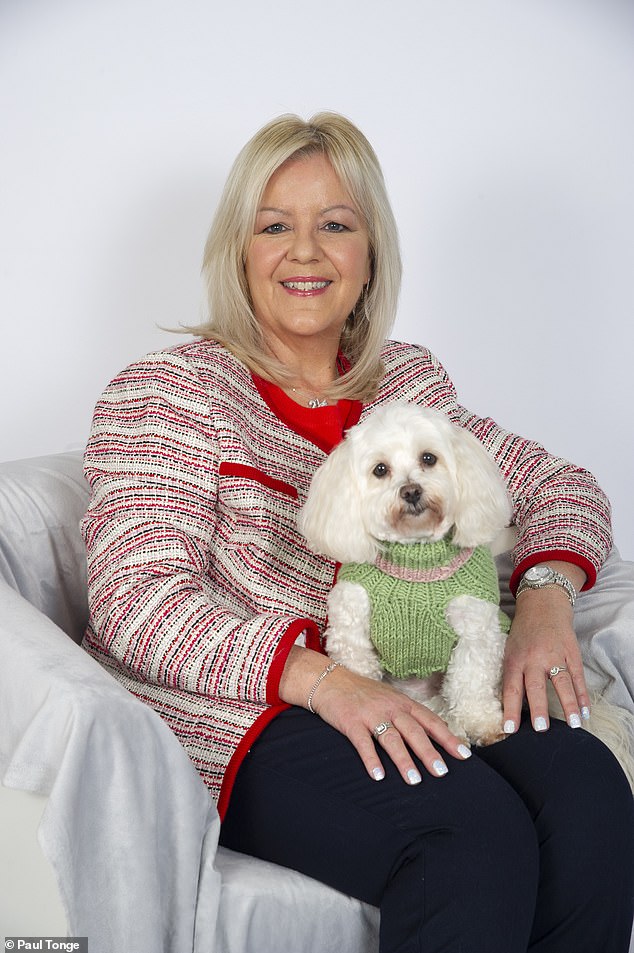 Sue Tostevin, 57, from Nottinghamshire with her Maltipoo, Miss Teddy, who is a toy poodle and Maltese cross

‘All of a sudden, people wanted this wonder dog,’ Wally, 85, has previously explained. ‘Not in my wildest dream did I imagine all this would happen.’

Since then, he said, people have exploited the crossbreed concept to make money, leading to ‘horrific’ breeding practices and ‘unhealthy’ dogs.

Wally blames himself for opening ‘Pandora’s box’ and creating the pet world’s ‘Frankenstein’.

Despite Wally’s regrets, the poodle crossbreeds are the must-have pet among the A-list elite. 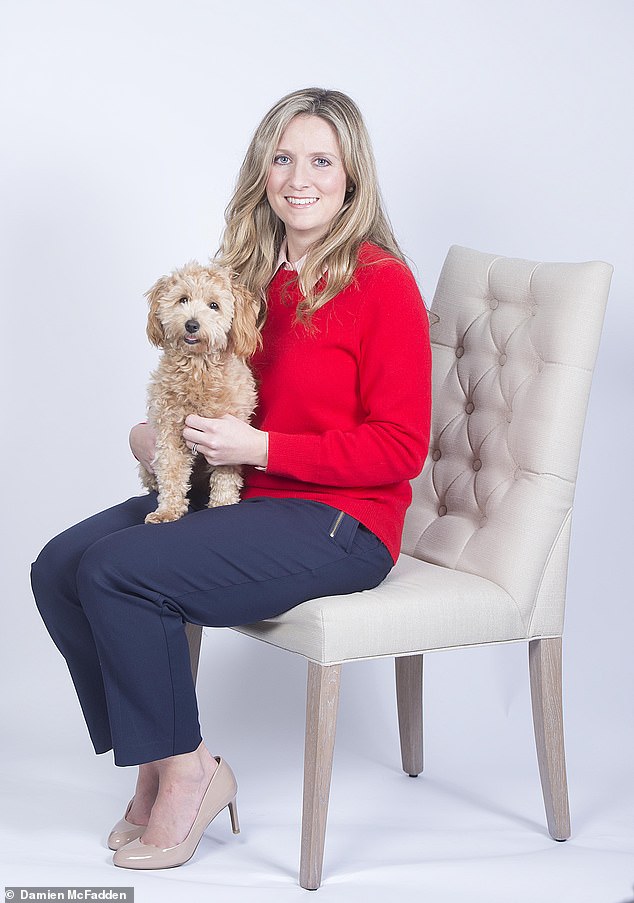 Gemma Bottomley, 30, from Shropshire with her dog Winnie. The canine is a poodle crossed with a Coton de Tulear

Australian labradoodle Reagan has 452,000 followers on Instagram, American sheepadoodle (a sheepdog-poodle cross) Zammy boasts 132,000 and Liverpudlian cockapoo Marley, who is a part-time model, has 45,600 Insta-fans.

But animal welfare experts fear the exposure is increasing demand among owners who care less about their pets than their online ‘likes’.

Cash on the nose

One of the family

Poodles are said to be the second-most intelligent dog, after border collies, while the typical mix breeds are affectionate (Maltese), sociable (Labradors) and playful (Schnauzers).

The belief that they’re non-shedding is a myth.

‘A 100 per cent poodle will not shed as much as many other breeds, but as soon as you cross it with another breed you lose that advantage — possibly totally,’ explains Beverley Cuddy, editor of Dogs Today magazine. 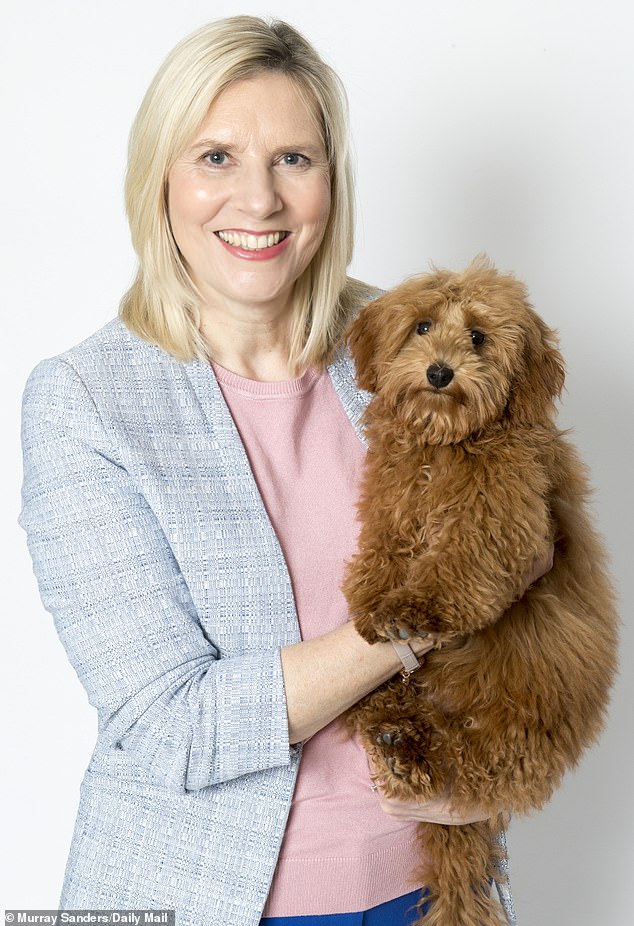 Jane Blake, 56, a retired teacher from Surrey with her dog Daisy. The pooch is a cross between a toy poodle and a goldendoodle

Many believe crossbreeding eliminates genetic defects, but experts are doubtful. ‘Take a Labrador with hip problems and cross it with a poodle with bad eyesight, and you’ll end up with a labradoodle that can’t walk properly and can’t see,’ says Marc Abraham, who regularly sees poodle crosses at his Brighton surgery.

Barb Turnbull of the Doodle Trust says another problem occurs when breeders mate miniature or toy poodles with larger breeds.

‘There is no shortcut to miniaturising a breed,’ she adds. ‘Crossing a large breed with a small breed creates skeletal problems and the resulting puppies will probably end up crippled.’

Other issues include dogs with brains too big for their skulls, and large puppies which have to be born by Caesarean. 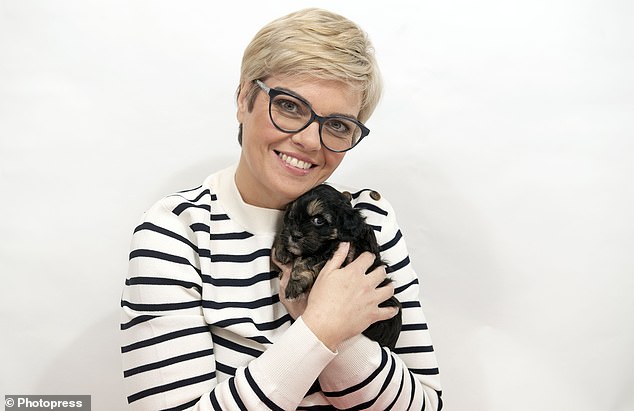 Crossbreeding hunters (such as a Beagle or Springer Spaniel) with playful poodles, is a recipe for trouble. Vet Katherine Hunter says: ‘They are often anxious, reactive to noise and prone to biting if scared. That makes treating them tricky. They often have to be sedated for simple procedures such as nail trims.’

Demand has resulted in puppy farms — often in Wales or Eastern Europe — where pups are pumped out in their thousands.

Many suffer from parasites, kidney problems and respiratory disorders. The Kennel Club says one in five bought via the internet dies before it is six months old.

‘Always demand the health certificates and ask to see the puppy interacting with its mother before buying it,’ advises Marc Abraham of Pup Aid. 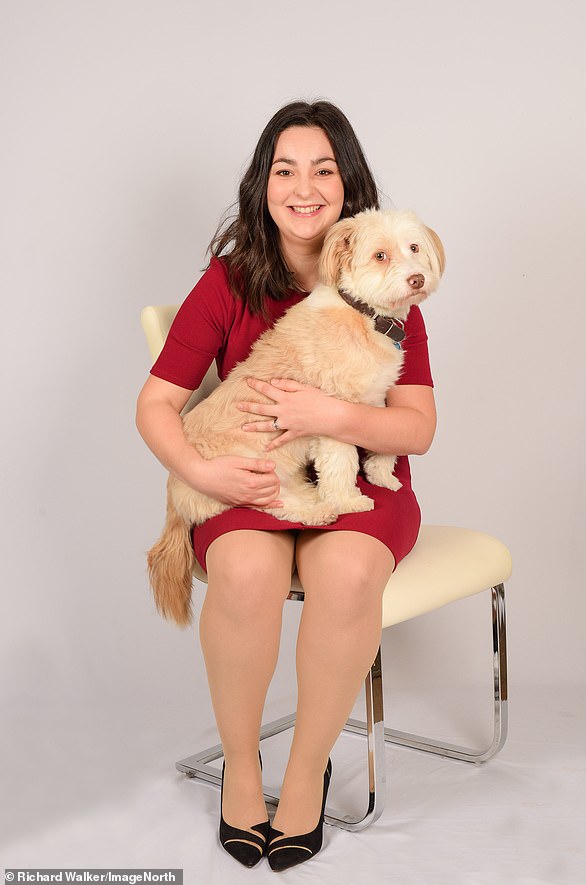 Laura Garwood from Sheffield, with Alfie the Eskippoo who is a cross between a poodle and an American Eskimo dog

Laura Garwood, 32, is a part-time university receptionist and lives in Sheffield with her husband and their 16-month-old son, Harry.

Their Eskipoo, Alfie, is a cross between a poodle and an American Eskimo dog.

Laura says: ‘On holiday on the Greek island Lesbos in 2015, we kept seeing a gorgeous stray dog near our hotel and joked how we’d love to take him home with us. So we did!

‘Through a local lady who rehomes dogs, Alfie had his vaccinations, got a passport and came to Sheffield. We had a dog DNA test done — which cost £60 online — and discovered he’s an Eskipoo.

‘He’s cheeky, loves chewing things, and wakes us up by crying and whining, which was great preparation for us having our son, Harry. Alfie loves attention and cuddles, and will barge his way between my husband and me on the sofa. He devours chicken, sausages and cheese and is in his element when Harry drops food from his high chair.

‘He also has no fear and often goes up to even the most vicious-looking dogs wanting to play with them.’ 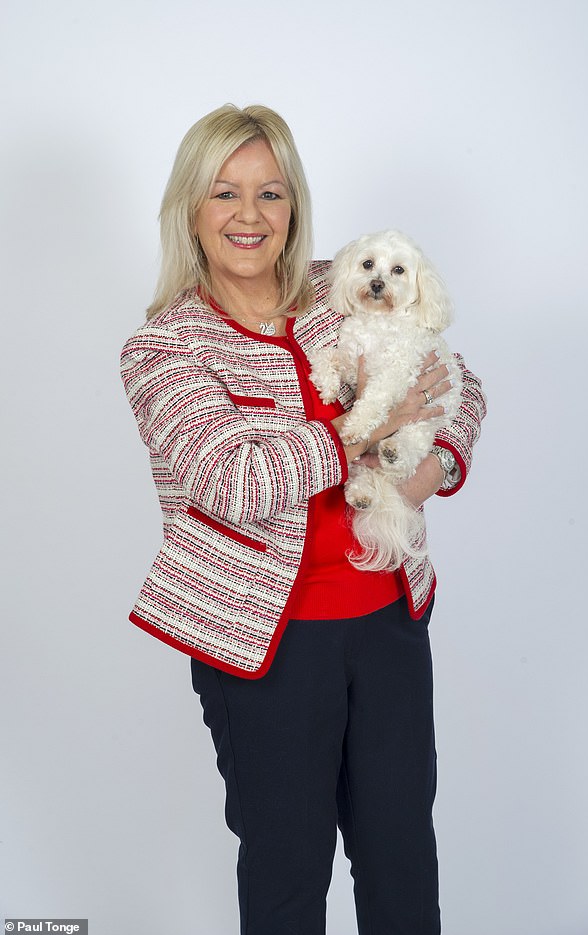 Sue Tostevin, 57, from Nottinghamshire with her Maltipoo, Miss Teddy

Sue Tostevin, 57, lives in Nottinghamshire with her husband Andrew, 68, a retired chef. Her Maltipoo, Miss Teddy, is a toy poodle and Maltese cross.

Sue says: ‘We got Miss Teddy in September 2011 from a wealthy lady who’d bought her as a pup a few months earlier and treated her like a human, feeding her from a knife and fork and giving her drinks from a teacup.

‘When we went to collect her, she was wearing a dress — I still like to put her in everything from dresses to jumpers and tutus — and jumped up immediately for a cuddle, which is where our love for each other began.

‘Andrew felt a bit pushed out at first, but he and Miss Teddy bonded when I left them alone one weekend. He likes to spoil her with roast chicken dinners, served with mash, gravy and green beans.

‘She’ll be eight in June, and is a healthy, glamorous little lady. With her long ears and fluffy tail, she was the inspiration for launching my business missteddy.com selling luxury accessories and clothes for dogs.’ 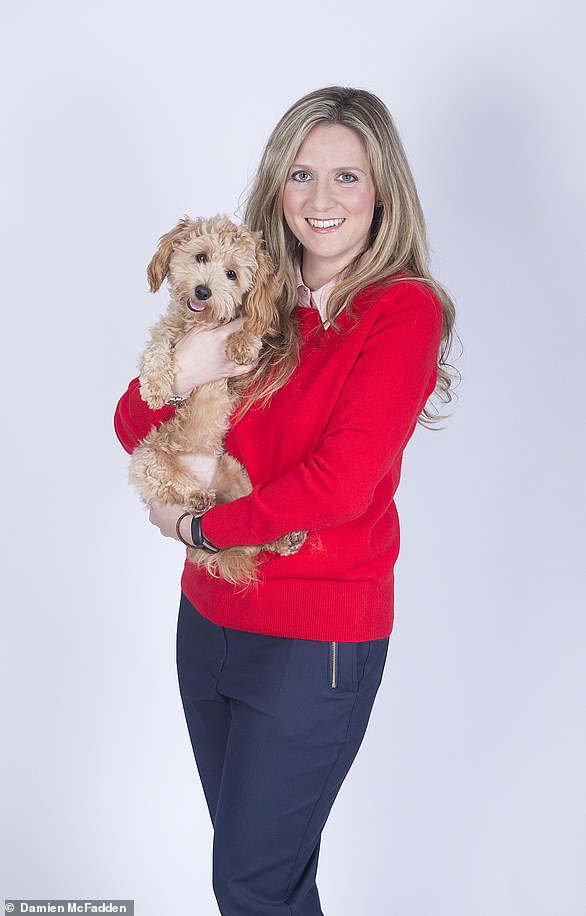 Gemma Bottomley, 30, from Shropshire with Winnie who is a poodle crossed with a Coton de Tulear

Gemma Bottomley, 30, helps to manage her family’s chain of builders’ merchants and lives in Shropshire with husband Jack, also 30, who works in sales. Winnie is a poodle crossed with a Coton de Tulear.

Gemma says: ‘When I take Winnie for a walk I have to allow an extra 45 minutes because so many people stop us with comments like ‘she’s so cute!’ and ‘she looks like a teddy bear!’ One day last week we were stopped 31 times.

‘Winnie was ten weeks old when I got her last August from a breeder in Cambridgeshire, one of only two in the UK then breeding Cotonpoos.

‘She’s the first dog I’ve ever had, she cost £1,200 and even my husband, who was initially resistant, has fallen for her mischievous charms.

‘Winnie is low maintenance, has oodles of confidence and loves human affection.

‘To our amusement, she walks around on her back legs like a meerkat, which is the poodle in her. She also learns tricks very quickly, but she’s a diva so there’s no guarantee she’ll perform to order.’ 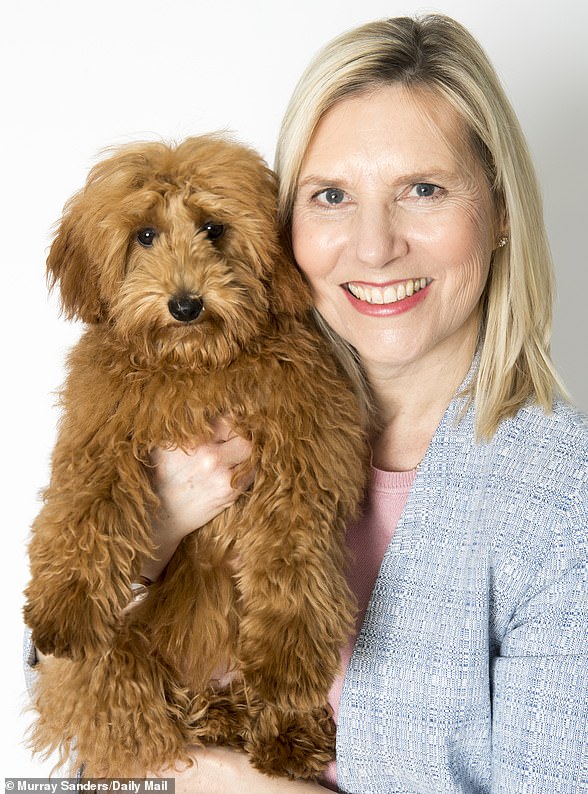 Jane Blake, 56, from Surrey with Daisy – a cross between a toy poodle and a goldendoodle

Jane Blake, 56, is a retired teacher who now offers private tuition. She lives in Surrey with her husband.

They have two daughters aged 29 and 27. Daisy is a cross between a toy poodle and a goldendoodle (poodle and golden retriever).

Jane says: ‘Now that I’m retired and my daughters have left home, it’s lovely having Daisy to nurture.

‘She’s a fluffy, bundle of fun who loves cuddles and climbing onto the dining table when I’m not looking. Like retrievers, she’s motivated by food and will do anything to get her paws on a piece of chicken.

‘I’ve wanted a puppy for ages but when I was working full time it would have been impossible, as it’s like having a newborn.

‘Last summer, I started researching in earnest. I wanted a hypoallergenic dog and discovered a local breeder had a litter of toy goldendoodles at £1,200 each. I fell in love with Daisy instantly.

‘Now five months old, she is so unbelievably cute that I set up her own Instagram page @daisythetoydoodle where she now has over 1,100 followers.

‘On the local High Street she’s like a little celebrity with everyone stopping to make a fuss of her.’ 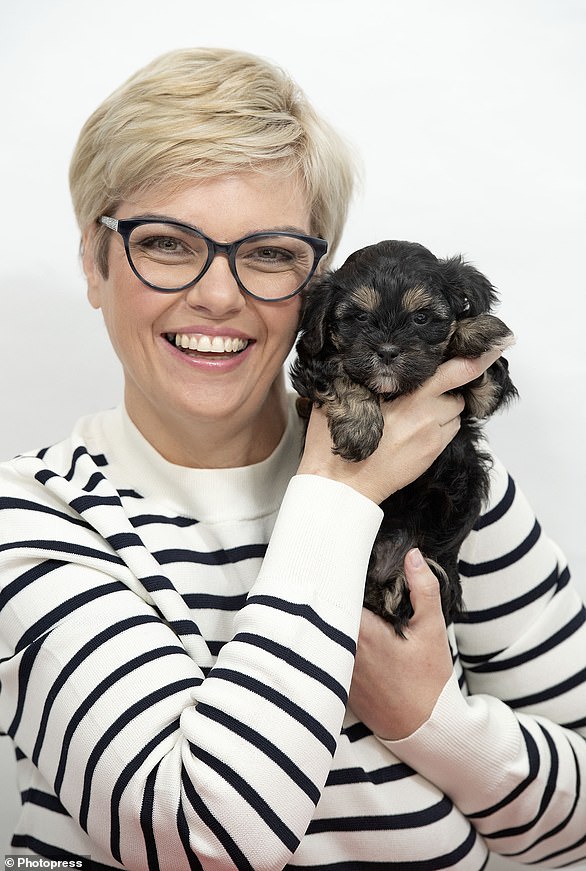 Yvonne Millar, 47, owns boarding kennels and a cattery and lives in County Antrim with her husband and their children aged 25, 22, and 20.

Yvonne says: ‘We got our first Lhasa Poo in 2005 from a rescue centre. When I discovered her name was Sam, the same as my dad who’d just passed away, I took it as a sign.

‘The life expectancy of this breed is usually around 10 years, so she’s done well to reach 15, though she’s now deaf and has doggy dementia.

‘We got Lola from another breeder three years ago and I’ve bred her twice now. Teddy is one of four pups from her second litter with a pure breed Lhasa Apso called Pudsey. Although he’s tiny he’s a real alpha male.

‘We live in the countryside, but all three dogs love going in the car more than anything.

‘In fact, I can’t say the word “car” aloud or they whine until I put them in the car!’