A lawyer who has been dubbed the ‘real life Elle Woods’ from the hit movie franchise Legally Blonde has revealed people always underestimate her thanks to her glam courtroom looks.

Kathleen Martinez, 31, an immigration attorney who lives in Dallas, Texas, first started practicing law in 2017, but wanted to bring her own personality to her job, shunning the industry’s typically-conservative dress code.

From bright pink suits to green dresses, with perfectly-manicured fingers and glossed blonde hair to match, she constantly draws eye in court – and even has a pink-themed office.

And Kathleen’s style and bubbly personality has also made her a hit on TikTok, where she has 489,000 followers.

However, it has not always gone down as well at work.

Kathleen Martinez, 31, from Dallas, Texas, first started practicing law in 2017 – but says she quickly faced judgment from colleagues over her colorful style 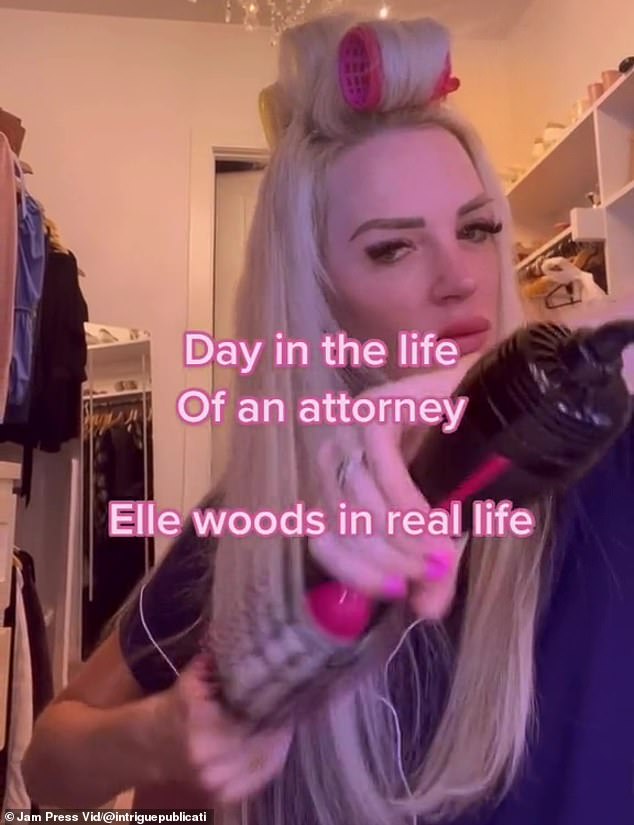 She regularly shares glimpses into her glamorous work life on TikTok, where she boasts more than 489,000 followers – some of whom have branded her ‘Lawyer Barbie’ 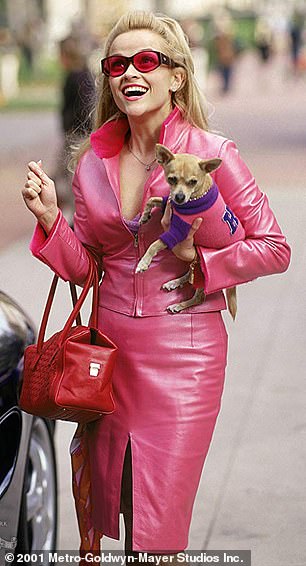 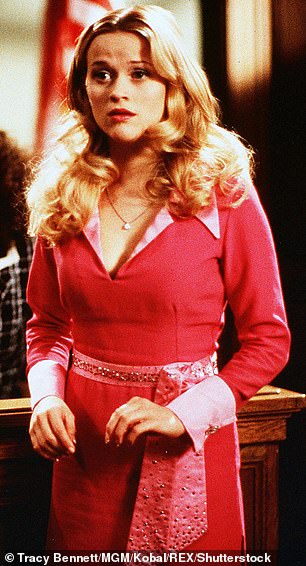 ‘In a law firm where I previously worked, my boss constantly commented on my appearance,’ Kathleen told JamPrime.com.

‘It was degrading and this manager made it very clear that I would not be taken seriously because of the way I dress.

‘Once I wore a green dress and was told by the same person that they wouldn’t be accompanying me to court until I changed into a more “modest”-colored dress.

‘I wore the green dress anyway and the judge loved it!

‘Law can be stressful, so having fun with my personal style helps me enjoy my job a little more.’

After facing years of ‘discrimination’ from colleagues over her ensembles, Kathleen – who shares who shares children Julian, three, and one-year-old Adrian with husband Alejandro, 39 – chose to ‘walk away’ from the job and launch her own firm, Martinez Immigration Law.

According to Kathleen, she has now put her former firm out of business – and says her ex-boss even applied for a position at her company.

‘My boss fired me from my first lawyer job for not “fitting in” with the conservative culture and refusing to make him coffee,’ she said in one TikTok video.

‘So I started my own firm, where we wear whatever we want and [I] ran my old boss out of business.

‘Best part? He recently applied for a job at my firm. I told him we need some help making the girls coffee.’ 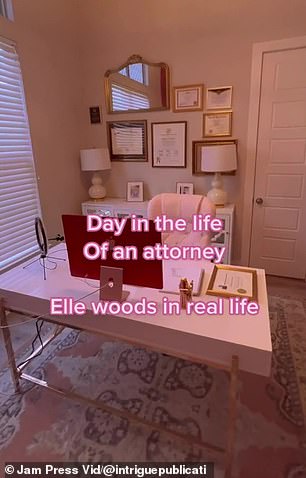 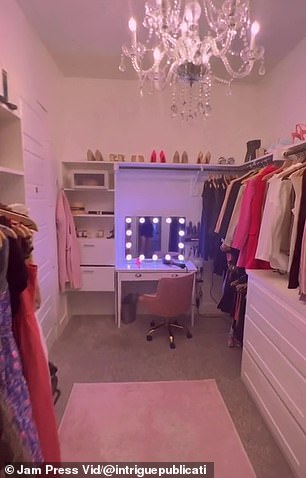 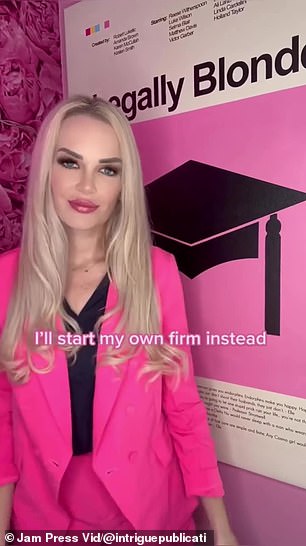 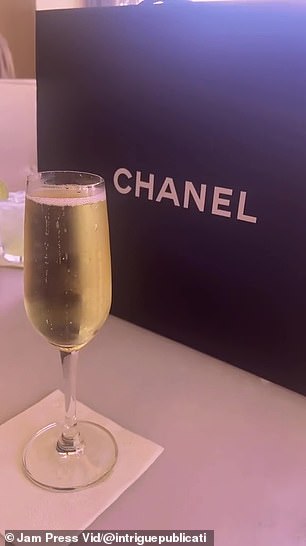 ‘Elle Woods and I both embrace personal style and we don’t let it get in the way of our intellect and professional goals,’ Kathleen said of her resemblance to the Reese Witherspoon character 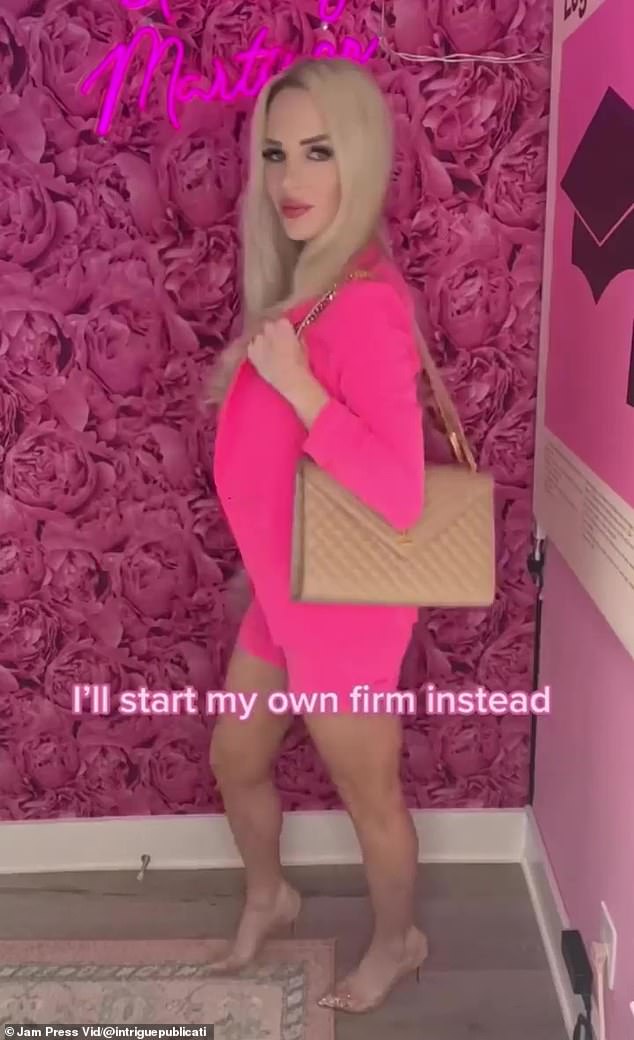 After facing ‘discrimination’ in her previous job, Kathleen says she chose to ‘walk away’ from her role in favor of starting her own business which encourages staff to ’embrace femininity’

Kathleen chooses to wear particularly ostentatious outfits when she has a big case and loves to prove opponents wrong, many of whom ‘underestimate’ Kathleen’s skills because of her fashion.

She said: ‘I like to stand out. I am usually opposing some old, conservative attorney who underestimates me due to my appearance.

‘I find that winning in bright suits makes it that much more enjoyable.

‘My clients love it too – they find me relatable.

‘Elle Woods and I both embrace our personal style and we don’t let it get in the way of our intellect and professional goals.

‘It sends an important message: you don’t have to be feminine or smart – you can be both!’

The attorney recently shared a glimpse into her daily routine and how she selects her looks in a recent TikTok, captioned: ‘Day in the life Of an attorney – Elle Woods in real life.’ 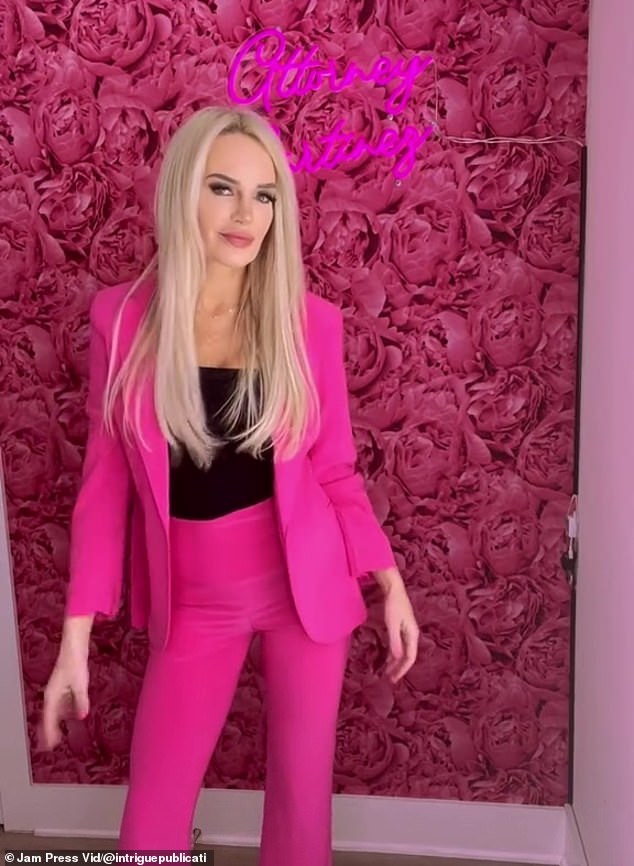 Kathleen chooses to wear particularly ostentatious outfits when she has a big case and loves to prove opponents wrong, many of whom ‘underestimate’ her skills because of her fashion 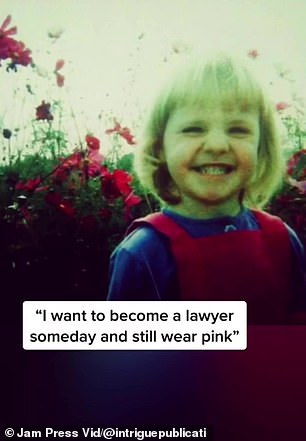 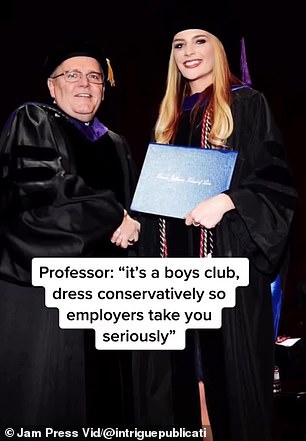 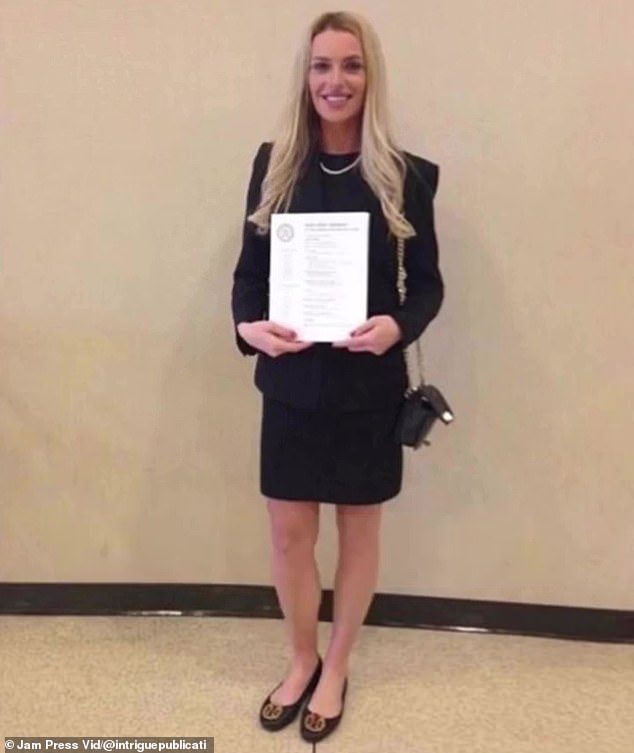 She admits that she initially tried to adhere to the conservative sense of style that most lawyers traditionally sport, but says she just didn’t feel like herself 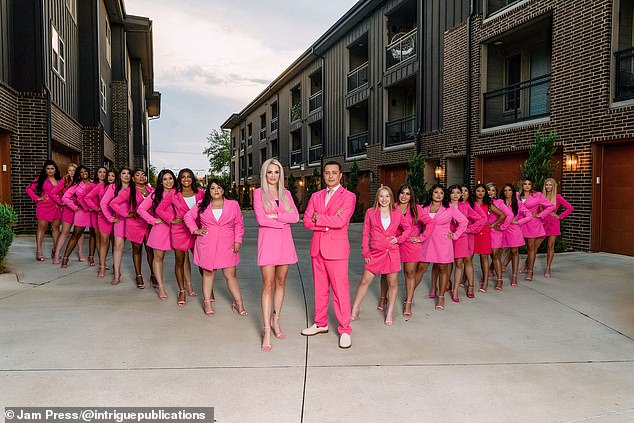 In the video, Kathleen curls her hair and then starts working in her colorful home office.

She checks emails before heading to her walk-in wardrobe, filled with stunning attire – again, largely in different tones of pink.

Kathleen then selects ‘the pinkest suit possible’ – a hot pink number – and a pair of ‘loud, obnoxious’ heels and a matching pink designer bag.

After court, she does a photoshoot in her bold look and later celebrates a job well done with a glass of champagne and a Chanel shopping trip.

Driving home her Elle Woods persona, Kathleen even selects a new piece of art reading ‘Legally Blonde’ before playing with her children and enjoying a glass of wine to end her day.

‘I love seeing other attorneys dress in a way that’s authentic to their personalities. I’m tired of wearing plain frumpy suits,’ another user said. 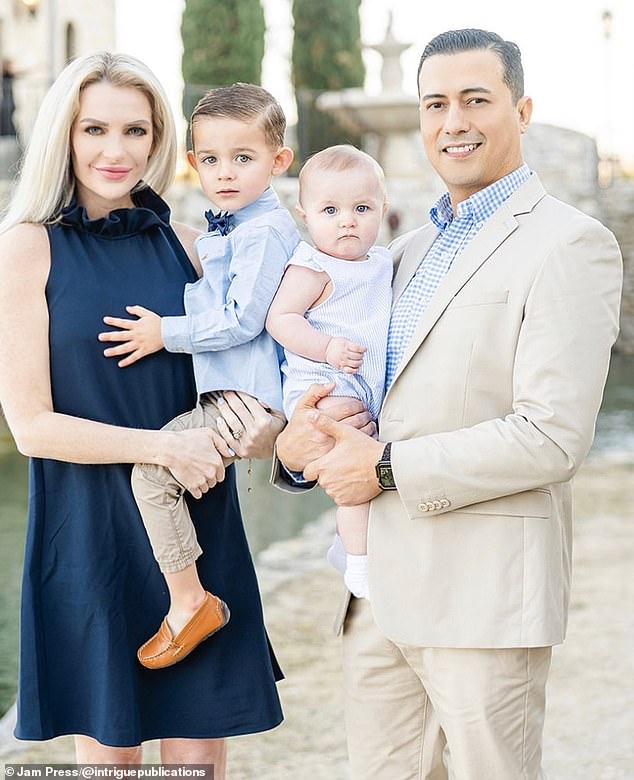 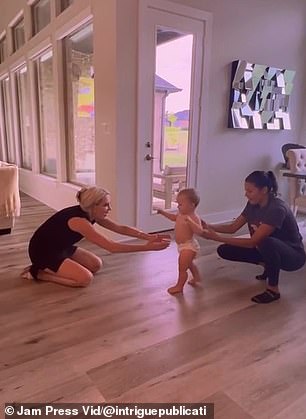 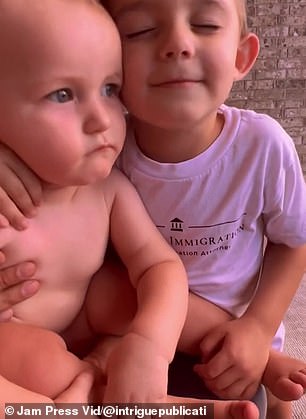 Someone else added: ‘You’re literally a Lawyer Barbie doll.’

‘You’re everything I want to be!! For so long I thought u had to be smart OR feminine. I’m glad that I now know I can be both!!,’ one fan said.

Another viewer commented: ‘I’m a female attorney and LOVE that you wear that bright pink suit to annoy opposing counsel.’

Despite her polished appearance, Kathleen says it only takes her 30 minutes to get ready and she loves sharing the finished look with her followers.

She said: ‘I like to illustrate just how fun practicing law can be.

‘I like picking out my bright outfits and shopping after court.

‘Practicing law doesn’t have to be as bad as people think it is, and you can win a trial in whatever outfit you feel like wearing.

‘Professionals shouldn’t be put in a box in order to be taken seriously.’