The end of the Second World War in 1945 forced creative figureheads to re-think how they would market products during American peacetime that were prominent for people in the war.

The spiced pork product known as SPAM had 90 percent of its inventory shipped overseas to feed the soldiers, but that was no longer needed after everyone returned home.

Jay C. Hormel, head of Hormel Foods, created the Hormel Girls in 1946 as a all-female, military-style band to market the company’s products.

Requirements to become a Hormel Girl included the women being war veterans and having experience as musicians.

Most of the performers were white and all of the woman were unmarried. Also, every woman played an instrument and some would even dance.

In August 29, 1946, the Hormel girls completed their first month of training and competed at the 29th American Legion National Drum and Bugle Corps Championship in New York.

Twenty females agreed to stay in the troop after the competition, but the numbers quickly increased as the women marched in parades, played in shows and sold Hormel products (including SPAM) door-to-door across America.

Motorcades of police cars would escort the women throughout the towns they visited as their popularity grew, and people nicknamed the group ‘the Darlings of the Airwaves’ or ‘the Spamettes’.

In 1953, the performance band came to an end because it was costing Hormel company $1.3million a year to shuttle the woman around. But the sales of Hormel products, especially SPAM, successfully doubled during the years the Hormel Girls performed helping bring the food into every day American society.

The Hormel Girls were created in 1946 after the Second World War. Their uniforms mirrored the women’s military roots 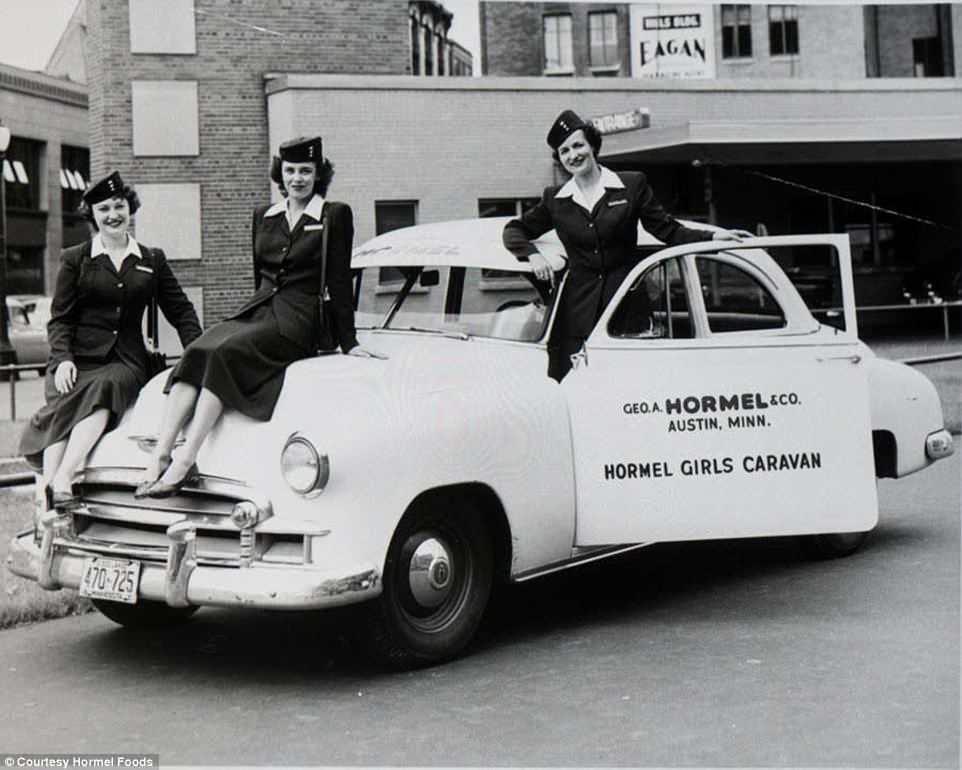 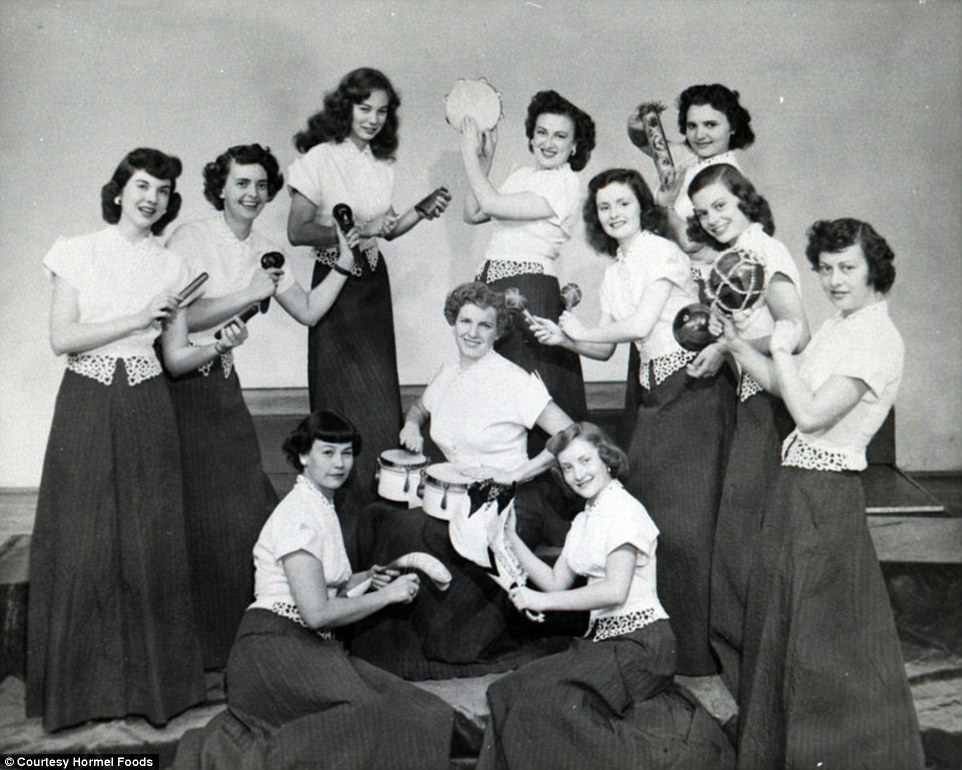 The group was made up of mainly white woman, all of whom were unmarried and previously served in the military 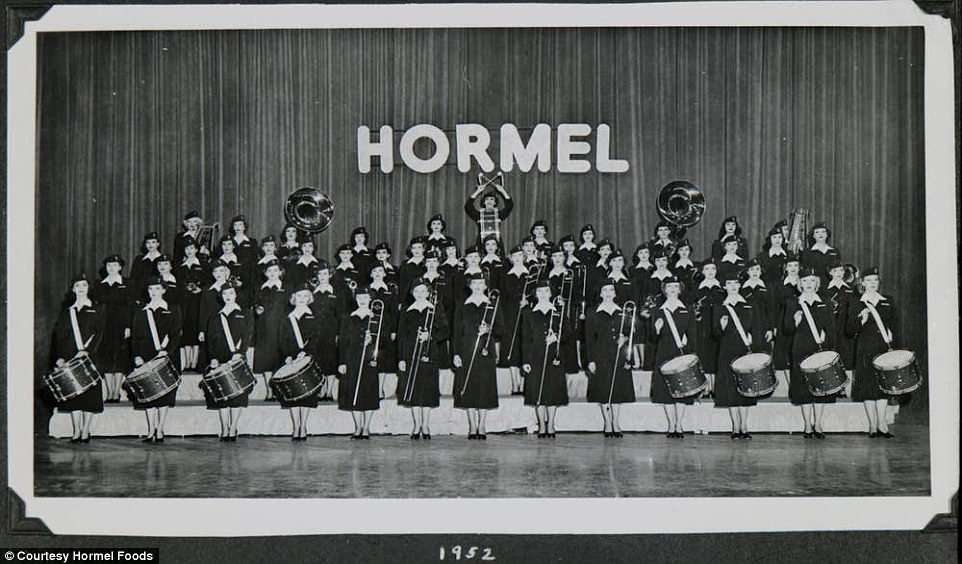 The Hormel Girls were created after the Second World War to help promote the company’s products. They wanted to bring the war food into regular Americana life 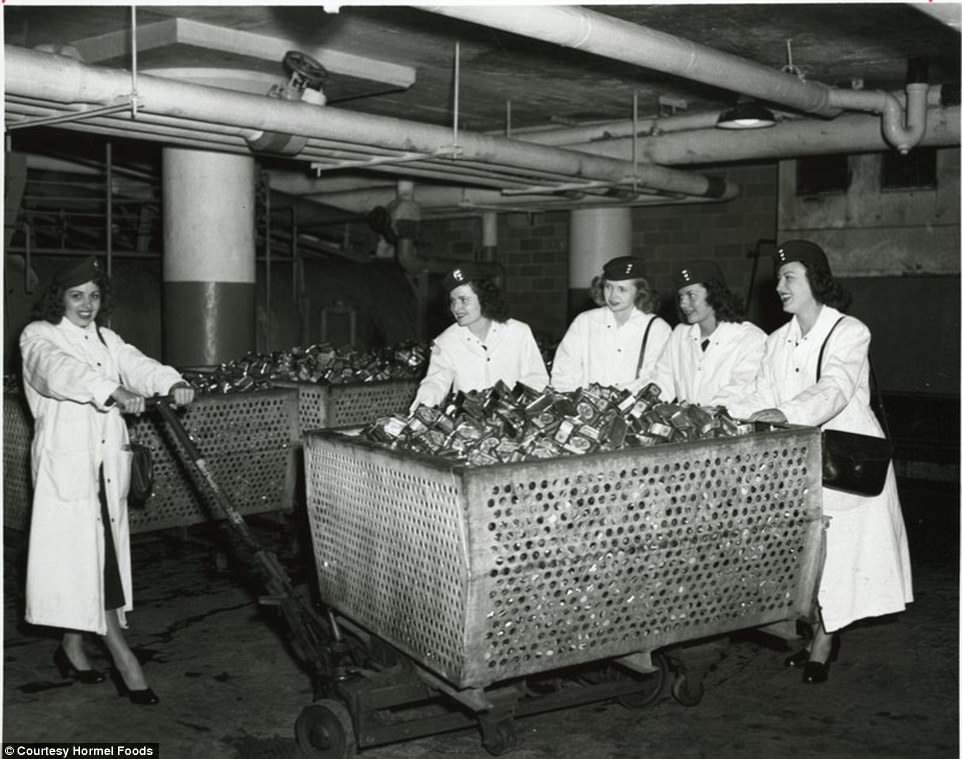 The woman would travel around the United States to perform as well as go door-to-door to sell the products. Pictured is five Hormel Girls during an Austin, Minnesota, factory tour 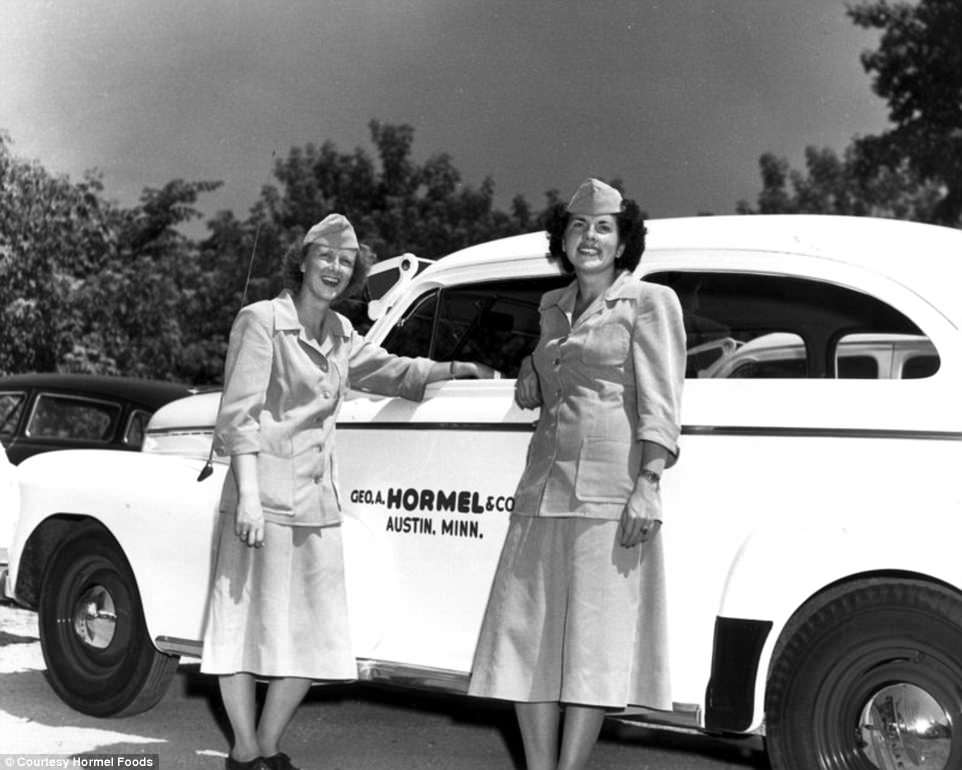 The Hormel Girls started out as 20 people in the troop, but the number quickly grew as the group grew in popularity 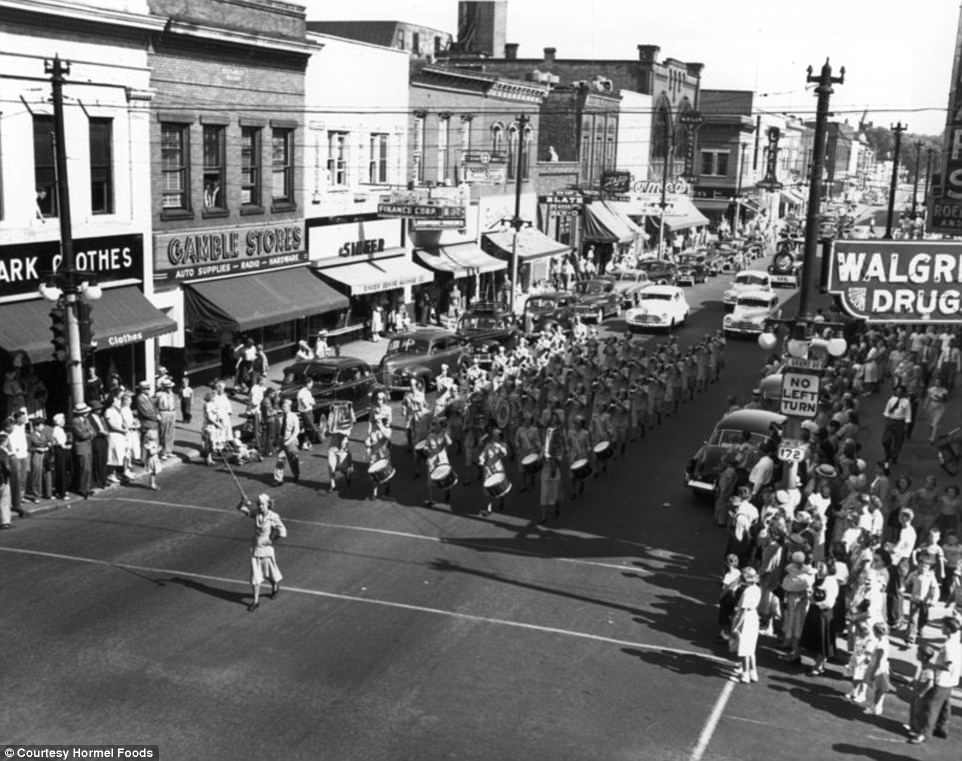 The Hormel Girls would hold parades when they visited towns. Later on, the group also included dance numbers 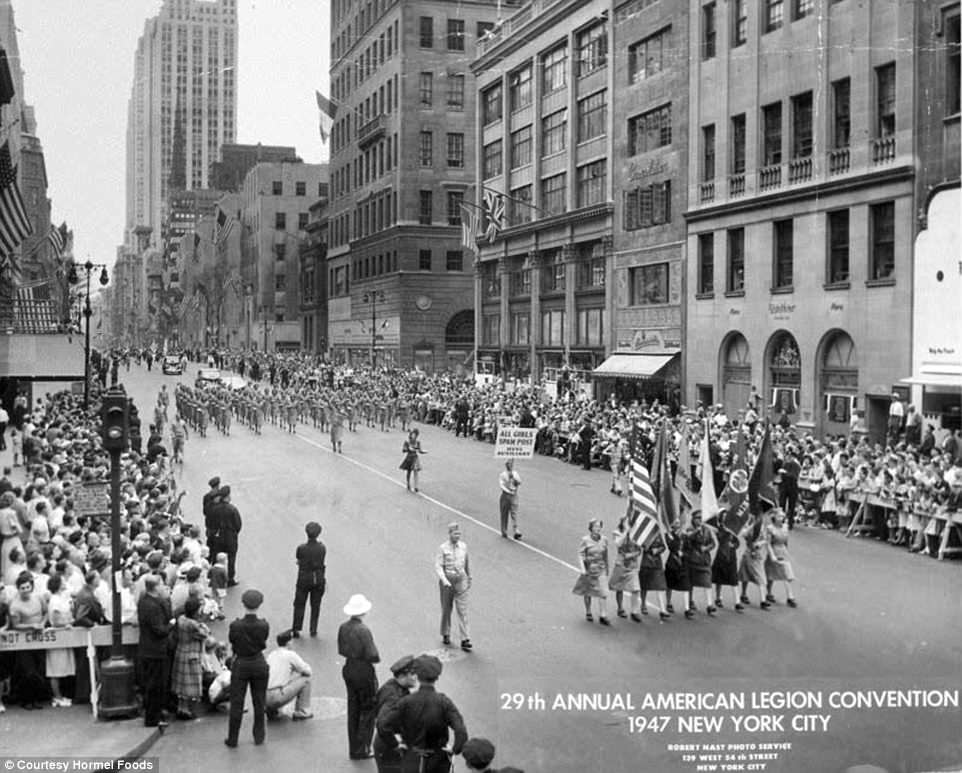 In August 29, 1946, the Hormel girls completed their first month of training and competed at the 29th American Legion National Drum and Bugle Corps Championship in New York 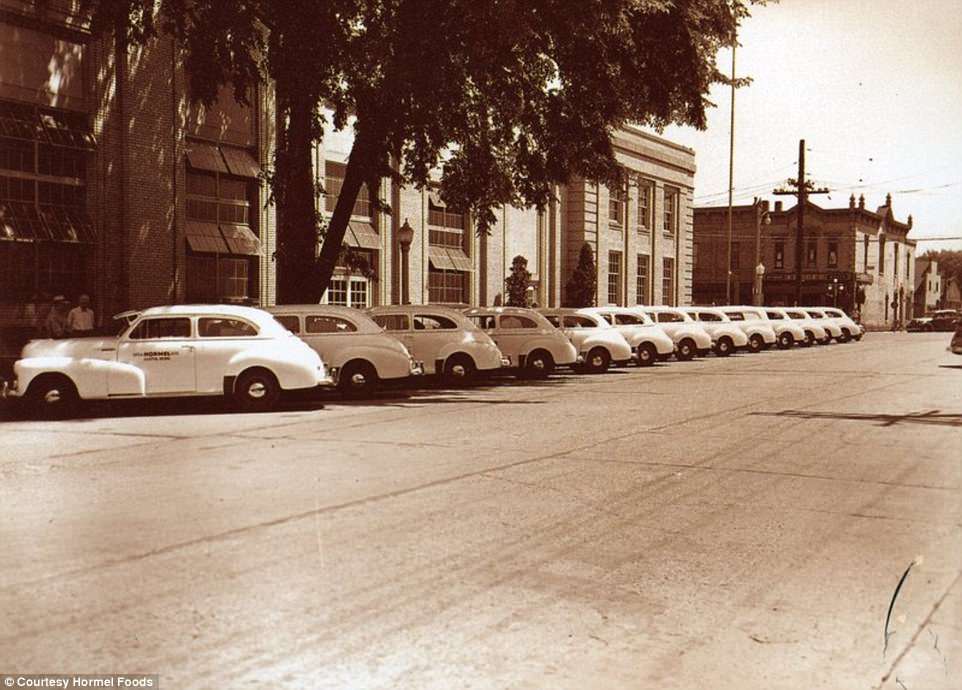 People nicknamed the group ‘the Darlings of the Airwaves’ or ‘the Spamettes’. Pictured are the Hormel Girls’ caravans 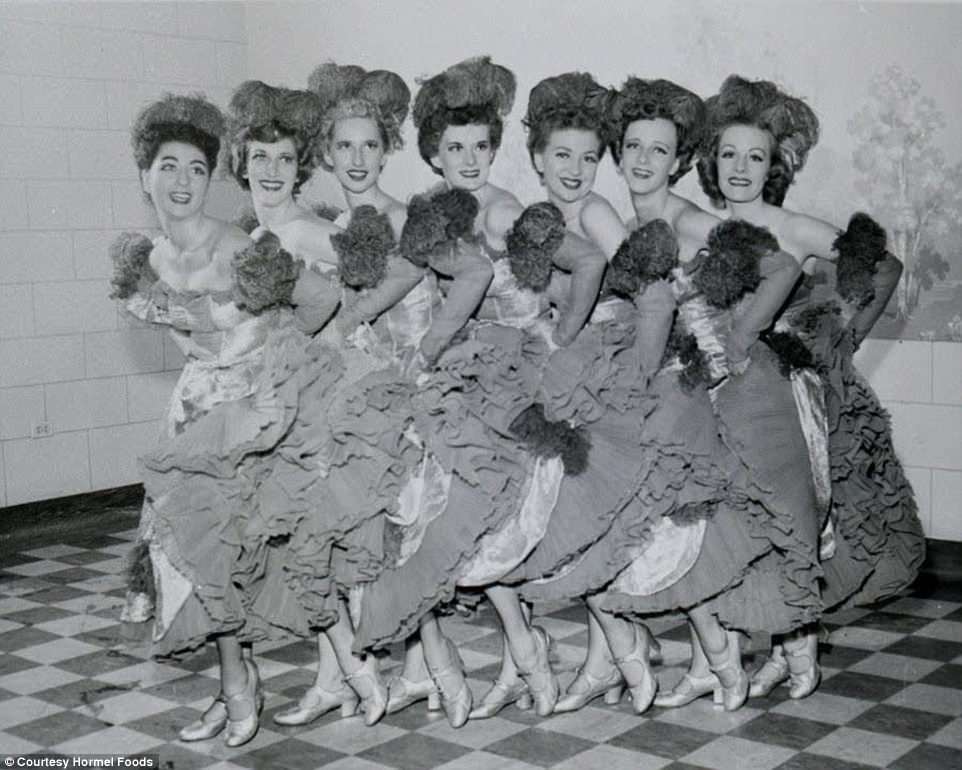 During the years that the group toured, they helped double the sales for Hormel Foods 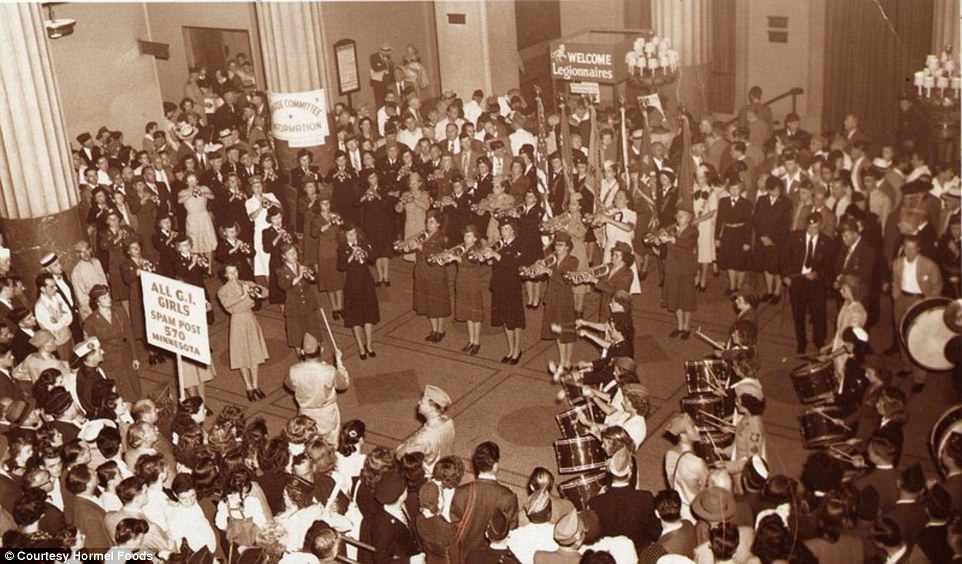 The group was disbanded in 1953 because it was costing the company $1.3million per year to caravan the woman around the country