Meet the toddler who can only eat PEACHES

A 23-month-old Canadian boy survives on just peaches – but they can’t be frozen, canned or dried.

Micah Gabriel Masson Lopez, from Quebec, suffers from an agonising condition which means he is allergic to almost every other food.

He faces a risk of going into a deadly shock or turning blue if he eats anything other than fresh peaches, his terrified parents claim.

Doctors diagnosed him with food-protein induced enterocolitis syndrome, often shortened to FPIES, when he was six months old.

Micah’s mother, Caroline Masson, said the first solid food that he tried was a banana – but it caused him to go into shock.

Children often need a lot of persuasion to eat fruit and vegetables. But not Micah Gabriel Masson Lopez – a toddler who survives on peaches

She told GlobalNews: ‘He proceeded to vomit four hours later, six times in a row and pass out, pale and almost blue.

‘Life revolves around making sure he is the happiest little boy he can be — and for that, we need to be able to provide him peaches every day.’

Micah, who is underweight and visits nine different specialists every month, is only able to eat peaches currently. He eats them once a day.

Doctors are concerned he is on the brink of another failure to thrive diagnosis, which could see him hospital-bound and reliant on a feeding tube. 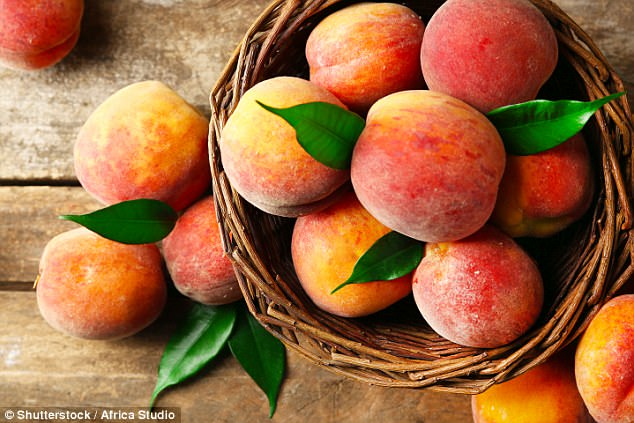 He faces a risk of going into a deadly shock or turning blue if he eats anything other than fresh peaches, his terrified parents claim

Food protein induced enterocolitis syndrome or FPIES is a severe reaction to food proteins that happens one to four hours after a problematic food is ingested.

The condition primarily occurs in infants, with most outgrowing it by the age of three, but it can also exist in adults and older children.

At its most extreme, the allergy sparks vomiting, diarrhoea and a shock-like state. The exact cause within the body is unknown.

The most common problem foods are milk and soy protein, but rice, chicken, oats, peanuts, potato and fish are also known to have caused problems.

The condition is often missed by paediatricians because it does not spark the usual immune response and is not traceable through typical allergy tests. Skin prick tests for allergies come up negative.

Ms Masson struggles to get hold of fresh peaches for her son. They ‘are very hard to find off-season’, she told reporters.

Because of additives, which could prove deadly for Max, she has to steer clear of buying frozen, canned or dried peaches.

Even non-organic peaches are off the cards because of the small risk of the peach being cross-contaminated with corn – one of Micah’s trigger foods.

Ms Masson told GlobalNews: ‘We are buying peaches in bulk and are running out of funds to do so, as we also have to pay for his complex medical needs.’

She has been forced to delve into holiday funds for her other children to pay for Micah’s medical needs and has started a GoFundMe page.

Micah has started to eat half a teaspoon of rabbit broth every day in the past few weeks, which has been ‘going well’.

He also drinks a special food formula, paid for by the Canadian Government, because of his condition.

However, he’ll have to prove to officials that he is still allergic to dairy – one of his biggest trigger foods – next October by taking a test.

Ms Masson said this cruel decision would lead to him being ‘hospitalized yet again for over 24 hours’.

MailOnline has reported on this condition before. Last April, an Australian mother revealed her 14-month-old girl is also allergic to all foods, even breast milk.

And in September 2014, the story of Max Billingham came to light. The toddler, then two, suffered from FPIES and could only eat carrots, potatoes and bananas.