For most travellers, Syria is a no-go area that is far too dangerous to even contemplate visiting.

But one brave tourist has revealed how a visit to the war-torn country earlier this year gave him the trip of a lifetime – and some amazing holiday snaps.

Jorgo Molotsios, who is originally from Belgium, travelled to Syria in July and got to take in the sights in war-ravaged places such as Damascus, Douma and Homs.

Travel blogger Jorgo Molotsios went on an eye-opening trip to war-ravaged Syria. He had a great time but witnessed heart-wrenching destruction in several places including Douma (pictured), near Damascus 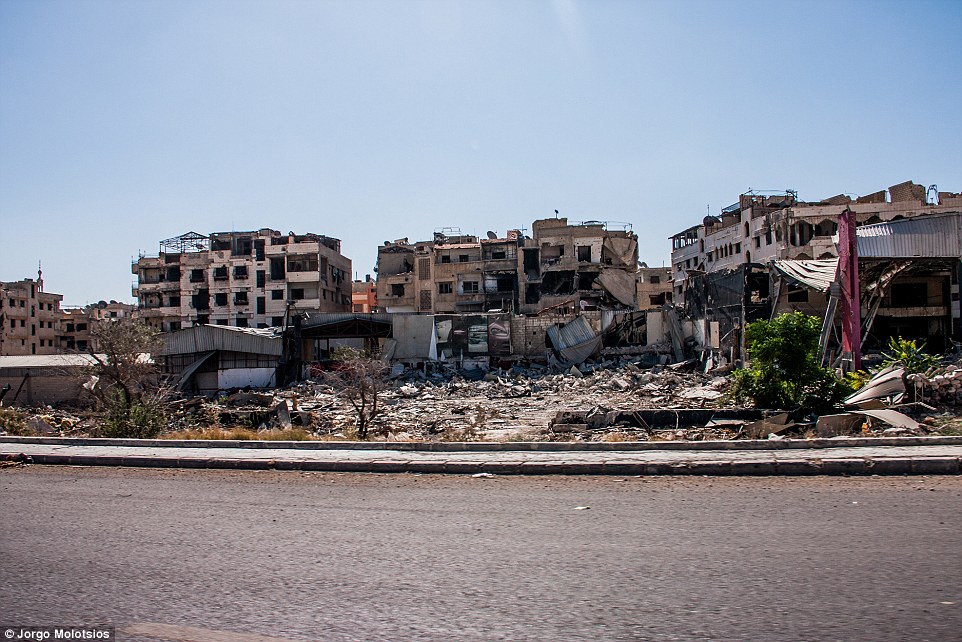 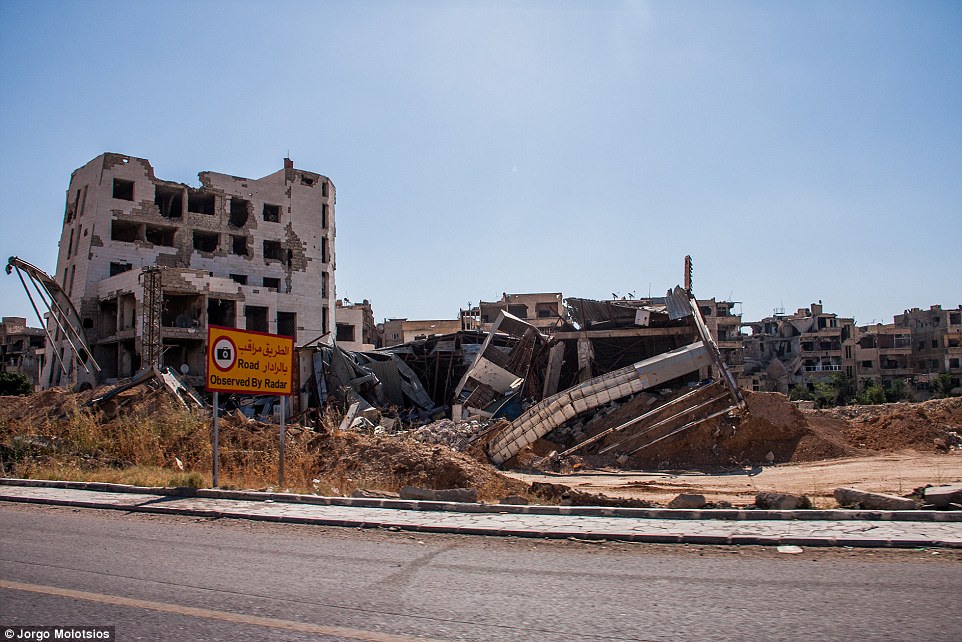 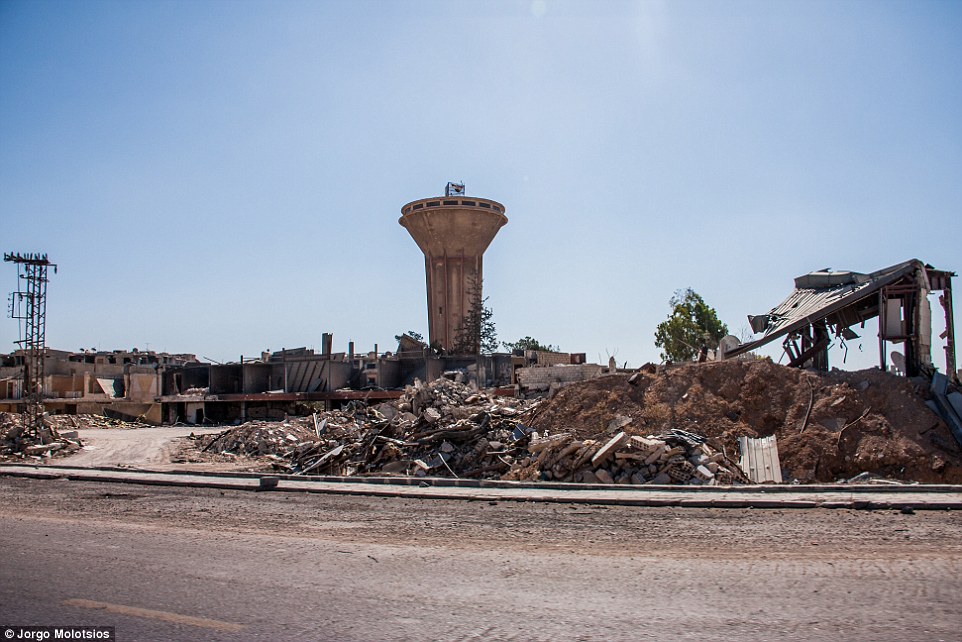 Talking about the destruction, Jorgo said: ‘It is clear this war has to stop as soon as possible. If only it was that simple’ 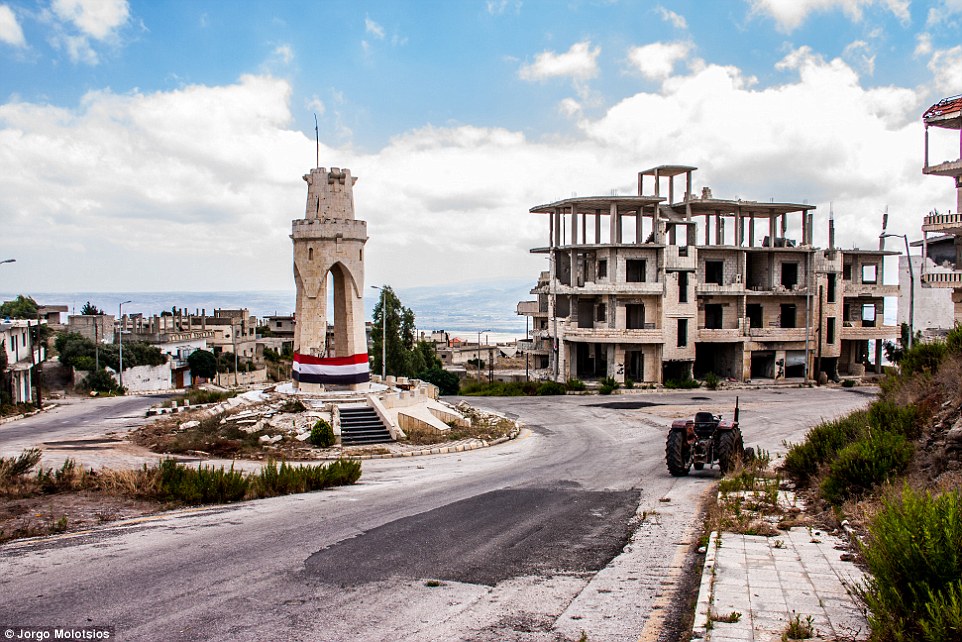 Another bombed out street that Jorgo captured on camera on his trip outside of Damascus. It was eerily deserted 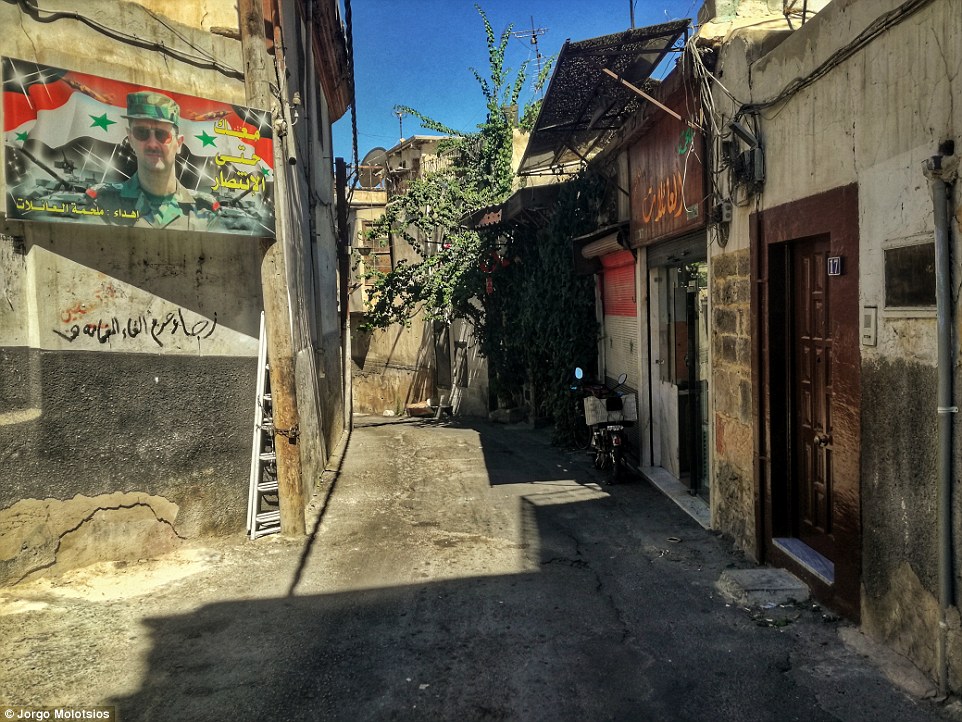 Although there are main roads in Damascus, Jorgo said he enjoyed strolling down the narrow, winding streets 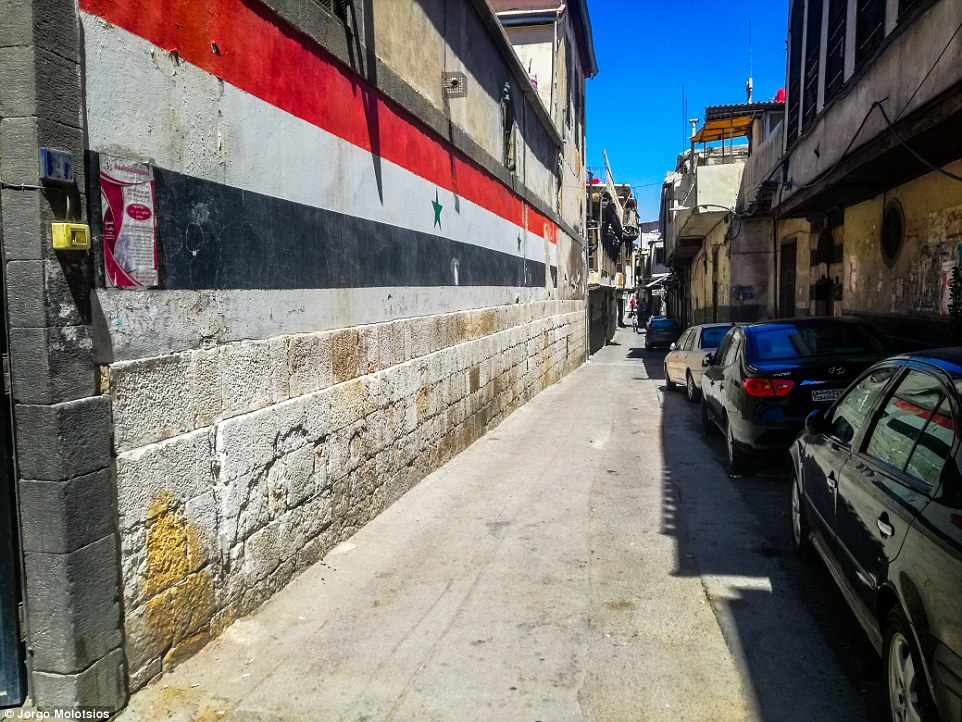 The Syrian flag painted on the side of a wall in Damascus. Jorgo visited the government-controlled areas of Syria, which are thought of as safer for tourists

He travelled to President Assad’s bullet-hole riddled country via Beirut, then took a one-hour car ride into Syria.

His first stop was one of the most prestigious hotels in Damascus, the Beit Al-Wali Hotel, which has several stunning open-air courtyards. Jorgo described it as one of the beautiful he had ever stayed in.

While in the Syrian capital the travel blogger was able to explore the narrow streets and noticed posters of President Assad on nearly every corner.

One of the most famous areas he visited was the Bab Touma district, which is packed full of Christian churches and is one of the earliest sites associated with the religion. 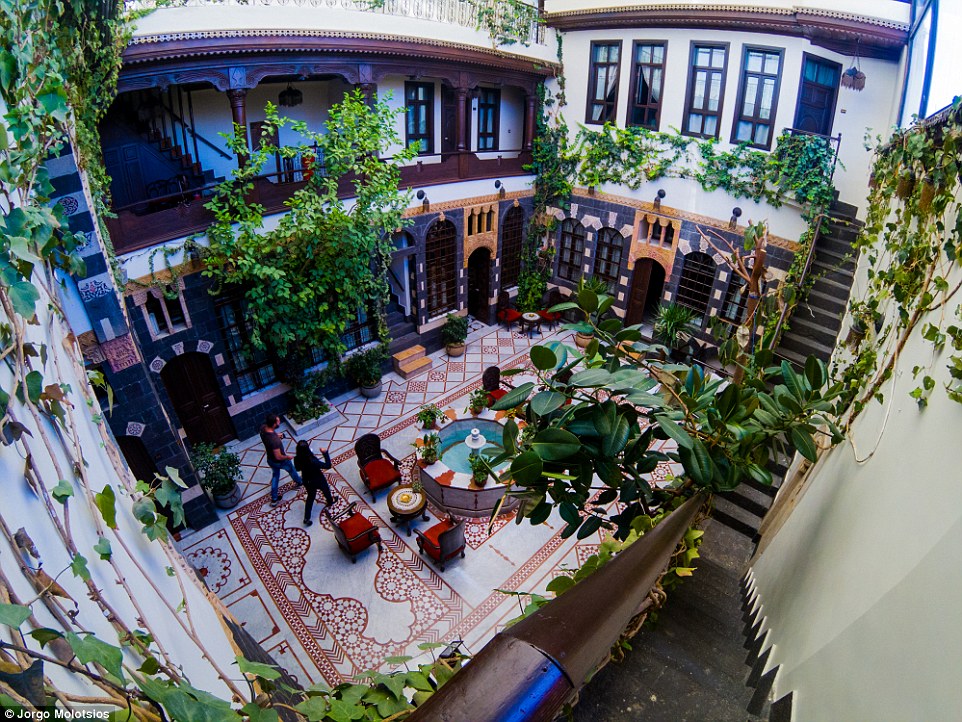 The beautiful courtyard of the Beit Al-Wali Hotel, where Jorgo stayed. It is often thought of as one of the most prestigious hotels in Damascus 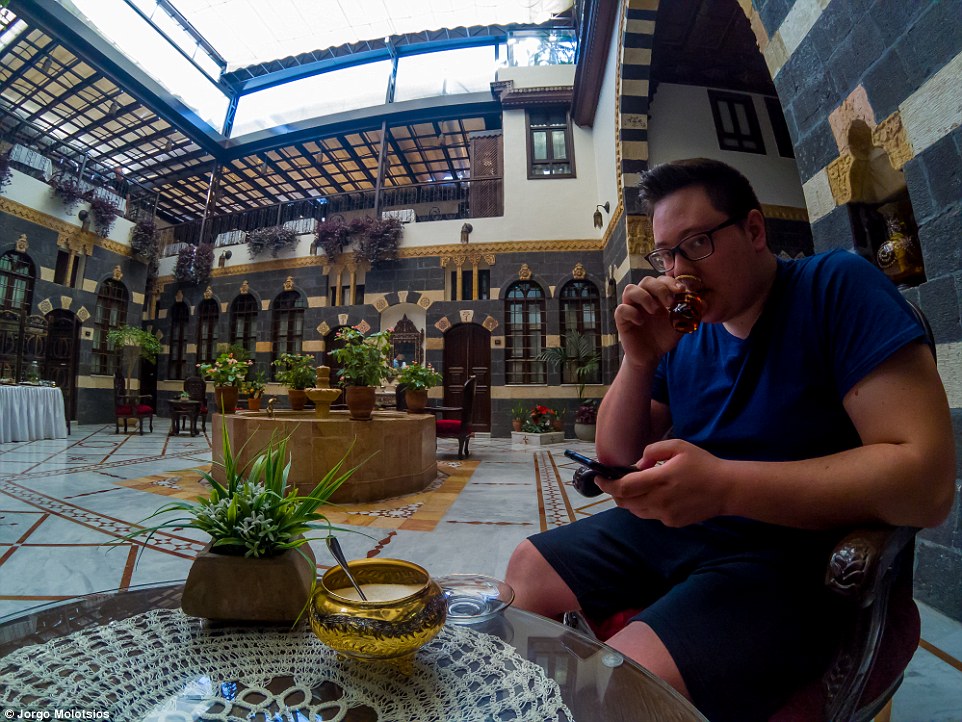 Jorgo said he would definitely recommend other people seeing the Syria he experienced. He is pictured taking tea in his hotel courtyard 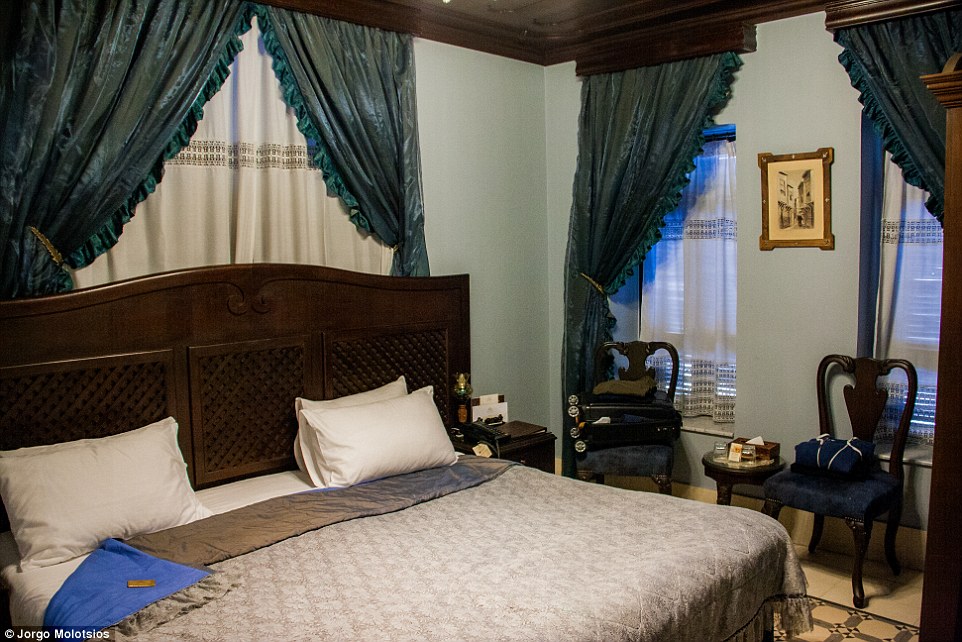 Jorgo’s hotel room in the city. He said: ‘Syrians have a great vibe and are the most hospitable people I’ve ever met. I got several invites for dinner and tea’ 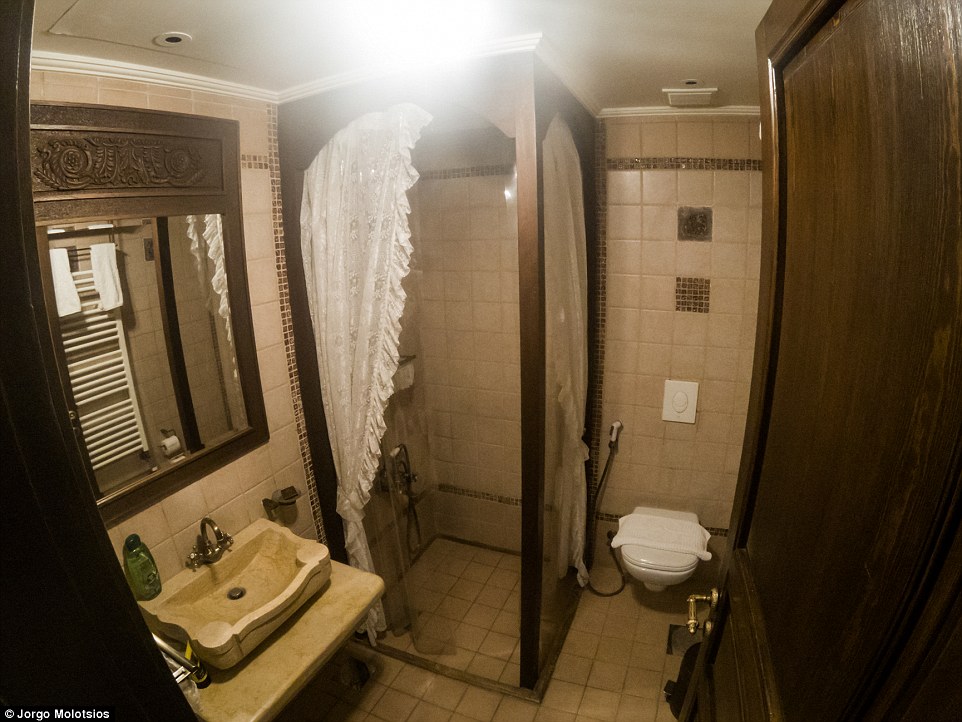 The bathroom in the hotel room. He travelled to President Assad’s bullet-hole riddled country via Beirut, then took a one-hour car ride into Syria

Bab Touma translates as Gate of Thomas and Saint Paul is thought to have stayed there on his mission from Jerusalem to Damascus.

And for Jorgo, he says visiting this district was one of the most enjoyable parts of his trip.

He told MailOnline Travel: ‘Syrians have a great vibe and are the most hospitable people I’ve ever met. I got several invites for dinner and tea. It’s just amazing how people interact with each other.

‘There also seems much less separation between the religions. Bab Touma, for example, is a Christian district with a lot of churches. You’ll see a lot of Muslims on Friday shopping in this district because all the shops are still open.’ 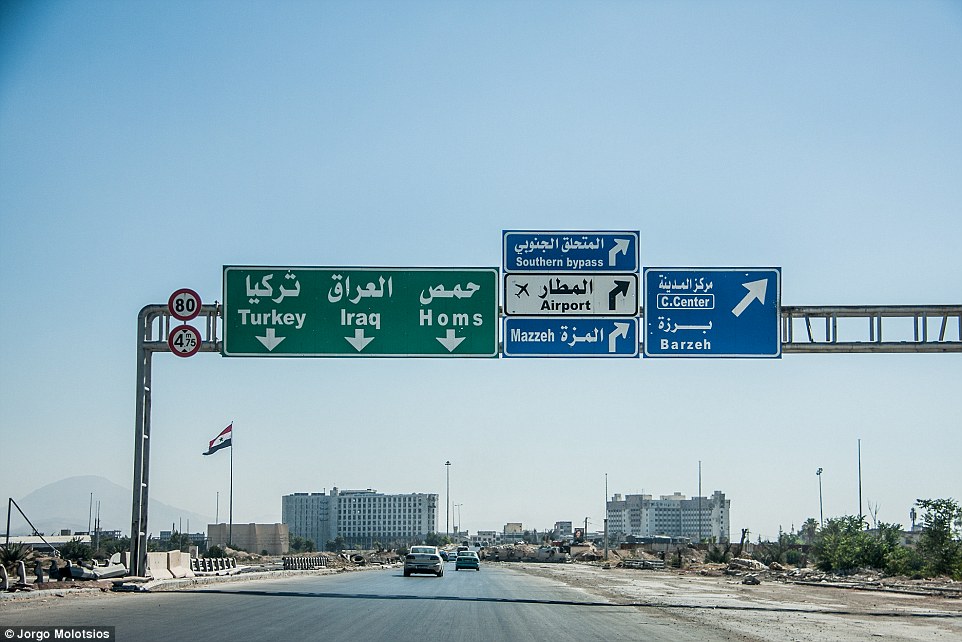 The road to Homs. The signpost is intact but the landscape around it bears the scars of war 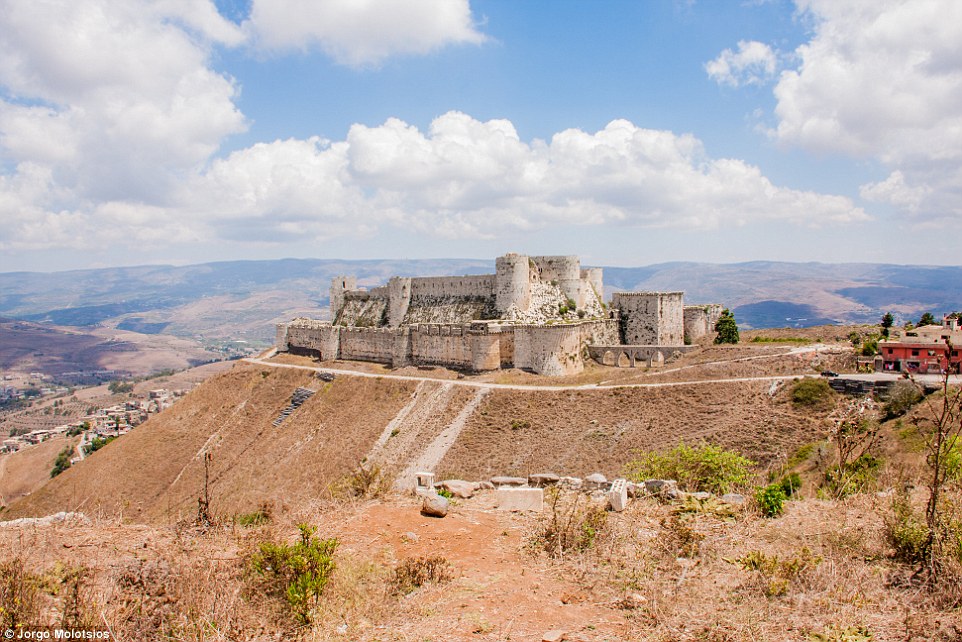 One of the most ancient sites Jorgo visited was the Krak Des Chevaliers, a medieval castle close to the city of Homs, which was partially destroyed during the recent war

As well as discovering Damascus, Jorgo also paid a visit to Krak Des Chevaliers, a medieval castle close to the city of Homs.

And it was on the journey out to the castle that Jorgo travelled through Douma in East Gouta and saw first-hand the destruction that has been caused by the vicious ongoing conflict.

On his visit to Syria, Jorgo noticed pictures of President Assad on nearly every street corner in Damascus

He saw bombed-out buildings and rubble lying in the streets, which he described as a ‘real eye-opener’.

He explained: ‘It was horrible and depressing to see the destruction by the war.

‘East Gouta looks small on Google Maps but when you pass by in a vehicle, it’s like there is never ending destruction.

‘It is clear this war has to stop as soon as possible. If only it was that simple.’

The Krak Des Chevaliers castle itself has been shelled and there had been fears the historic monument, which is part of a Unesco world heritage site, was beyond repair.

But when Jorgo visited, he said the castle was in a surprisingly good condition, and he also found it flying the Russian flag.

Jorgo also got to sample Syrian food at the many restaurants and cafes in Damascus eating chicken, hummus, flat bread, potatoes and vegetables.

He was also able to stroll through the city’s souks selling items such as gold, nuts and spices and visited the Umayyad Mosque, one of the holiest sites in Islam.

Jorgo got to meet with locals to take tea in the many lounges around Damascus and talk to them about their country. 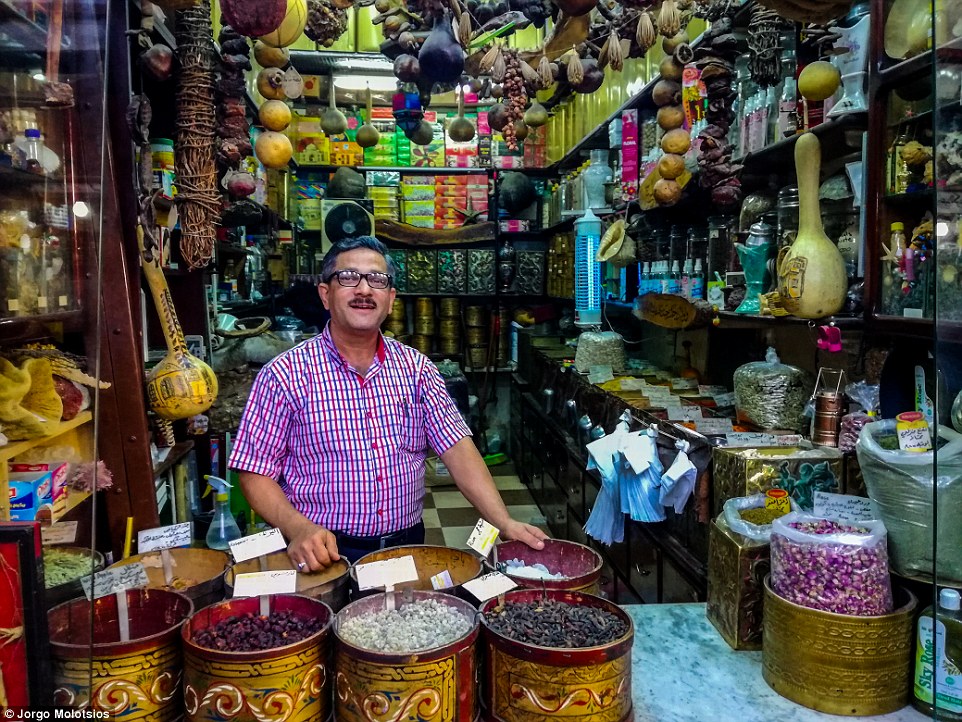 During his time in Damascus, Jorgo got to stroll around the city’s souks, where stalls sell items such as nuts, spices and even gold 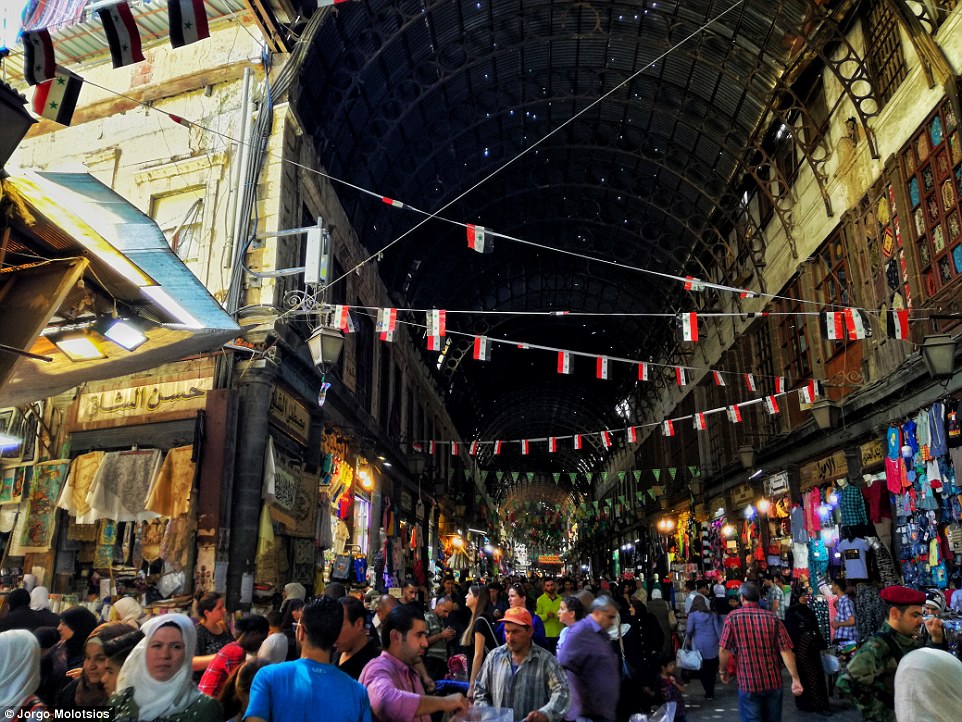 Syrian people pack into one of the souks in Damascus at night, when buying goods from market traders is easier thanks to the lower temperatures 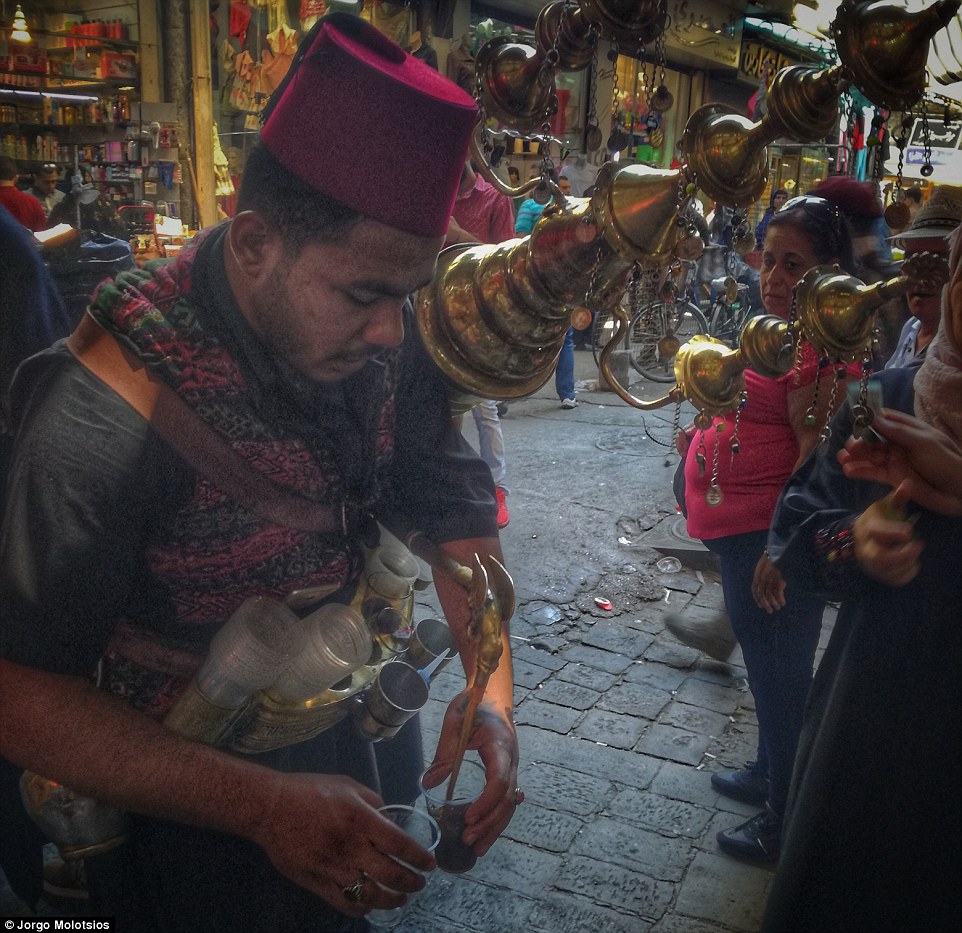 A tamarind drink being sold by a market trader. It’s common for Syrians to drink this on very hot days. Jorgo described it as tasting like a ‘sweet cherry juice’ 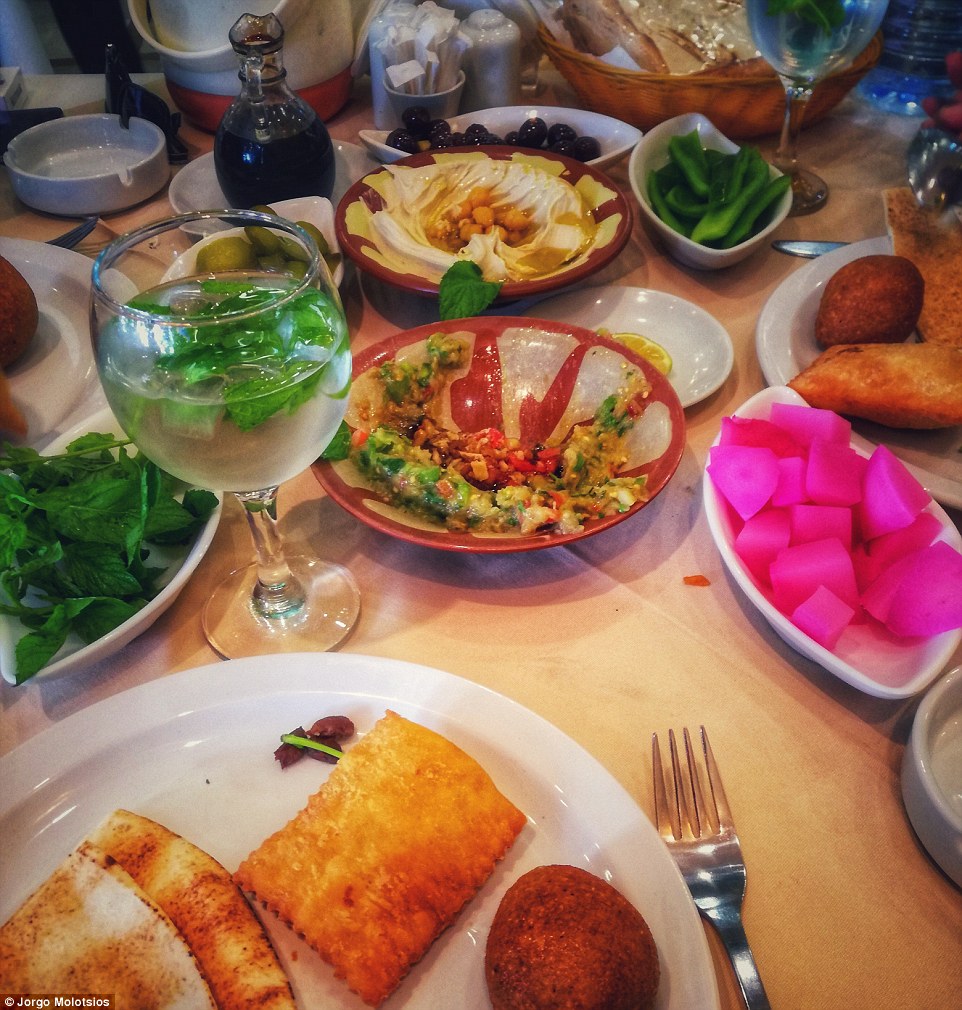 Damascus is packed full of cafes and restaurants, Jorgo noted. He dined on food such as chicken, hummus, flat bread, potatoes and vegetables

He also tasted a tamarind drink that market traders sell on very hot days, which Jorgo described as tasting like a ‘sweet cherry juice’.

And like in many other cities around the world, he was able to snap a picture of people posing beside a huge ‘I heart Damascus’ sign in the centre of the city.

He added: ‘The war is complex, but I wanted to see the country by myself, without choosing sides. 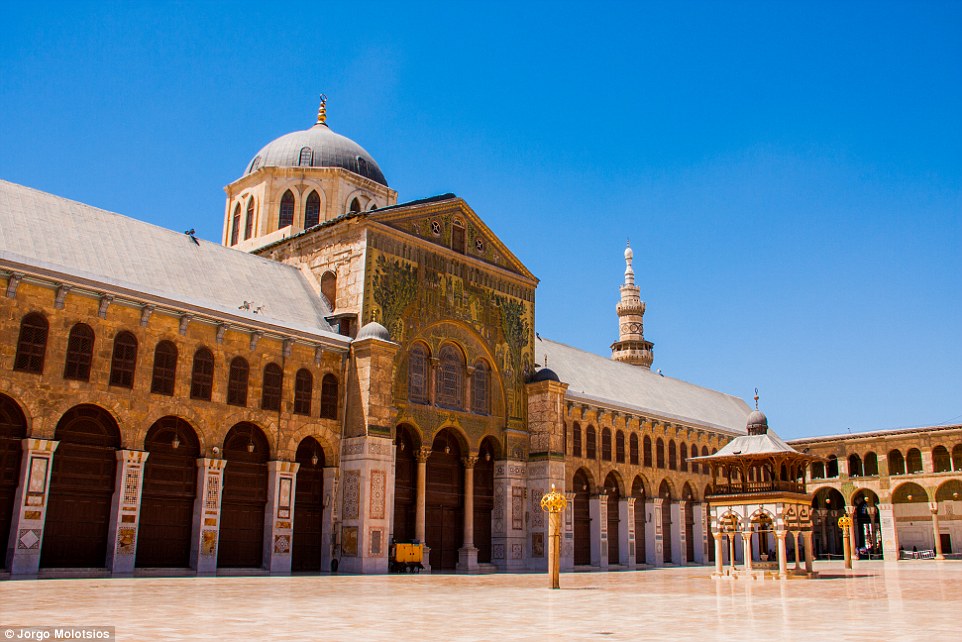 Jorgo visited the stunning Umayyad Mosque, also known as the Great Mosque of Damascus, which is one of the holiest sites in Islam 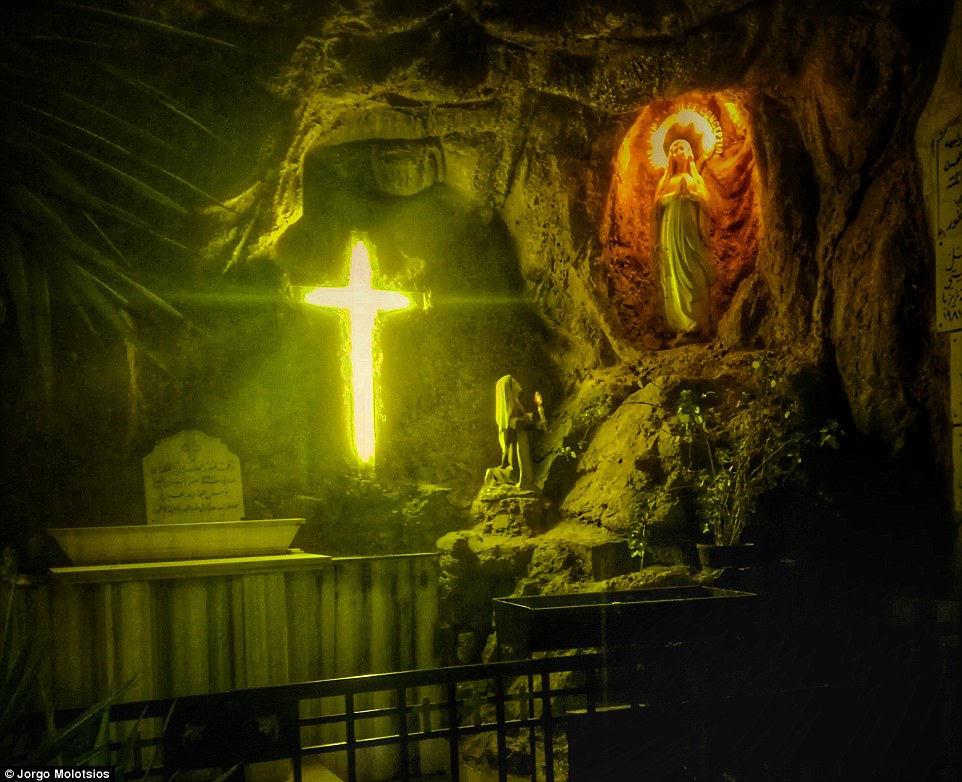 The entrance to one of the many churches in Bab Touma, which is one of the earliest sites associated with Christianity

‘I didn’t want to take any unnecessary risks of course so I talked to some people online from Damascus before going and it seemed okay to go … so I was ready to go.’

Jorgo admits that during the visit, he mainly stuck to pro-government areas of Syria as they tend to be safer for visitors.

And now he has visited the country and has a Syrian stamp in his passport, he is no longer able to join the USA’s Esta visa waiver scheme. 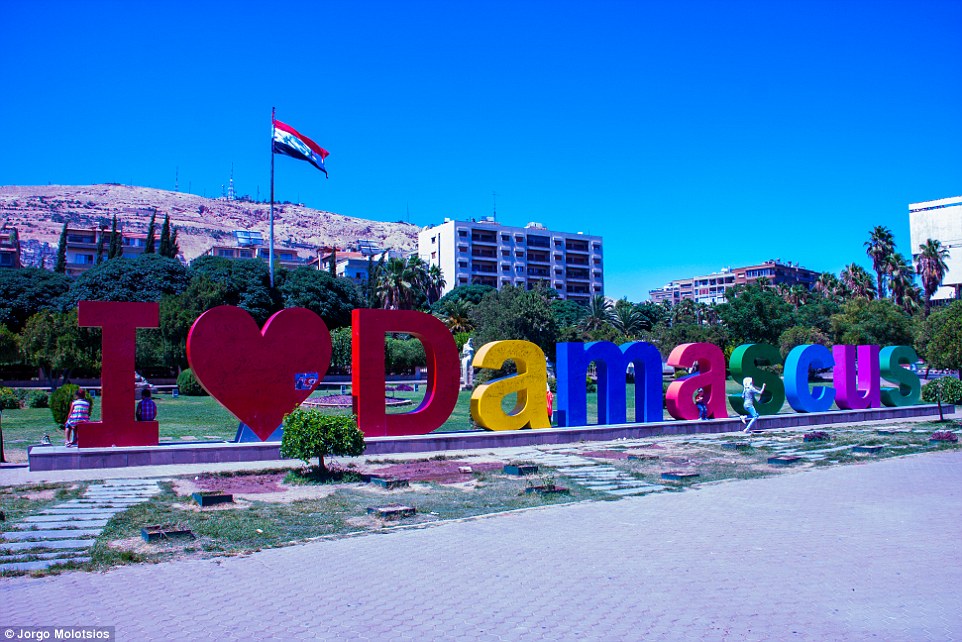 Like many other cities around the world, Damascus has a huge ‘I love’ sign where tourists love to take photos

So now travel to America would be very difficult.

Current advice from the UK Foreign and Commonwealth Office is that British citizens should not go to Syria and anybody there should leave by all practical means immediately.

But despite this, Jorgo said he would definitely recommend other people seeing the Syria he experienced.

He explained: ‘I never felt unsafe and the checkpoints keep the areas safe, so you can’t just go anywhere by accident where it might be dangerous.

‘I’d say, as long as you follow how the war evolves and stick to the government controlled areas, why not if you’re adventurous?’